Could terrorists use "World of Warcraft" to plan nefarious deeds?

Sure, but how likely is it, really? 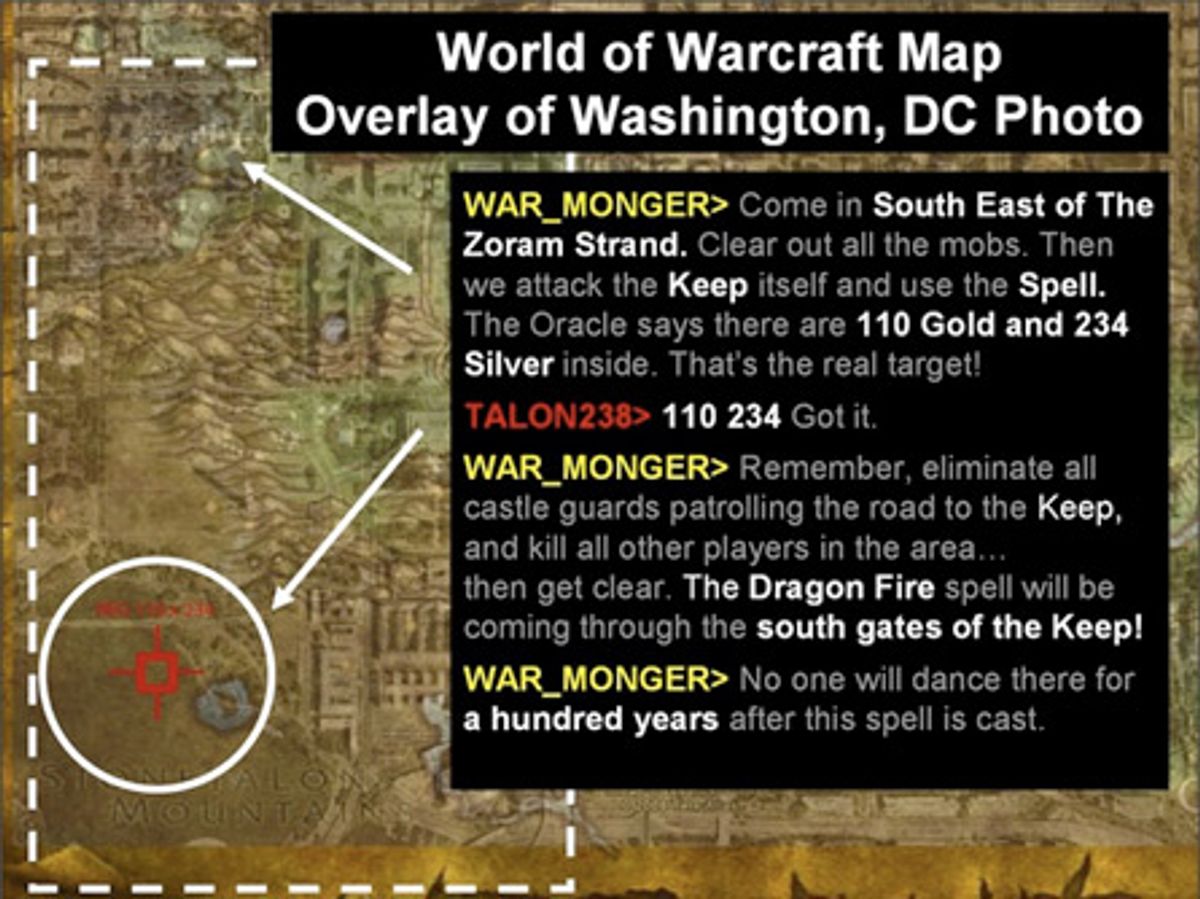 Clearly the government knows something about how to track terrorists that I don't. Because, honestly, I would never have supposed that terrorists would even consider using an anonymous, but public, online virtual world to organize or plan some kind of nefarious attack. But over the last year, we've seen examples of the Feds wanting to investigate more into these worlds -- the intel community wants to find evildoers in "Second Life" and "World of Warcraft." Heck, Congress held a much-ridiculed hearing on "Second Life" in April.

But the man on the intersection between military, intelligence and technology, Noah Shachtman, points us to a recent presentation by Dr. Dwight Toavs, a professor at the Pentagon-funded National Defense University. He outlined a possible scenario of how terrorists might use "World of Warcraft" to plan for, and possibly rehearse, an attack on the White House.

In it, two World of Warcraft players discuss a raid on the "White Keep" inside the "Stonetalon Mountains." The major objective is to set off a "Dragon Fire spell" inside, and make off with "110 Gold and 234 Silver" in treasure. "No one will dance there for a hundred years after this spell is cast," one player, "war_monger," crows.

In this example, the "White Keep" is the White House and the 110 gold and 234 silver refer to coordinates so that the plotters can align and overlay a map of Washington on top of an in-game map, and so forth. Is this really a plausible scenario? I mean, it would seem that getting groups of disparate terrorists who already know the language substitution codes on a game where they probably would be spotted as newbs pretty quickly would be fairly elaborate. That's, of course, aside from the fact that "World of Warcraft" currently doesn't even support Arabic -- despite the fact that there are Arabic-speaking WoW players. Further, while we know that these guys use YouTube (in a really basic way), they're not exactly the most tech-savvy crowd here.

I called Steven Aftergood, of the Federation of American Scientists, who has been watching the intel community for awhile now, to see how plausible that terrorists would infiltrate "World of Warcraft."

"I thought it was possible that the presenter was using 'World of Warcraft' as a metaphor for various kinds of new technology options that were not available in the recent past, but that need to be considered today," he said. "I don't think there's anything about 'World of Warcraft' or 'Second Life' or whatever it may be that is uniquely suited to terrorist planning."

He added that what the intelligence community needs to worry about more is other technologies that don't require as much skill to understand, acquire and operate that would give attackers a significant advantage over yesterday's adversaries. These include hand-held GPS devices and high-quality online digital mapping, like Google Maps or Google Earth.

Then again, Bruce Schneier, a noted security expert, boils it down to the following maxim: "Google Earth is not the problem; the problem is the availability of short-range missiles on the black market."