Nancy Botwin finds a conscience and almost loses everything else -- again. 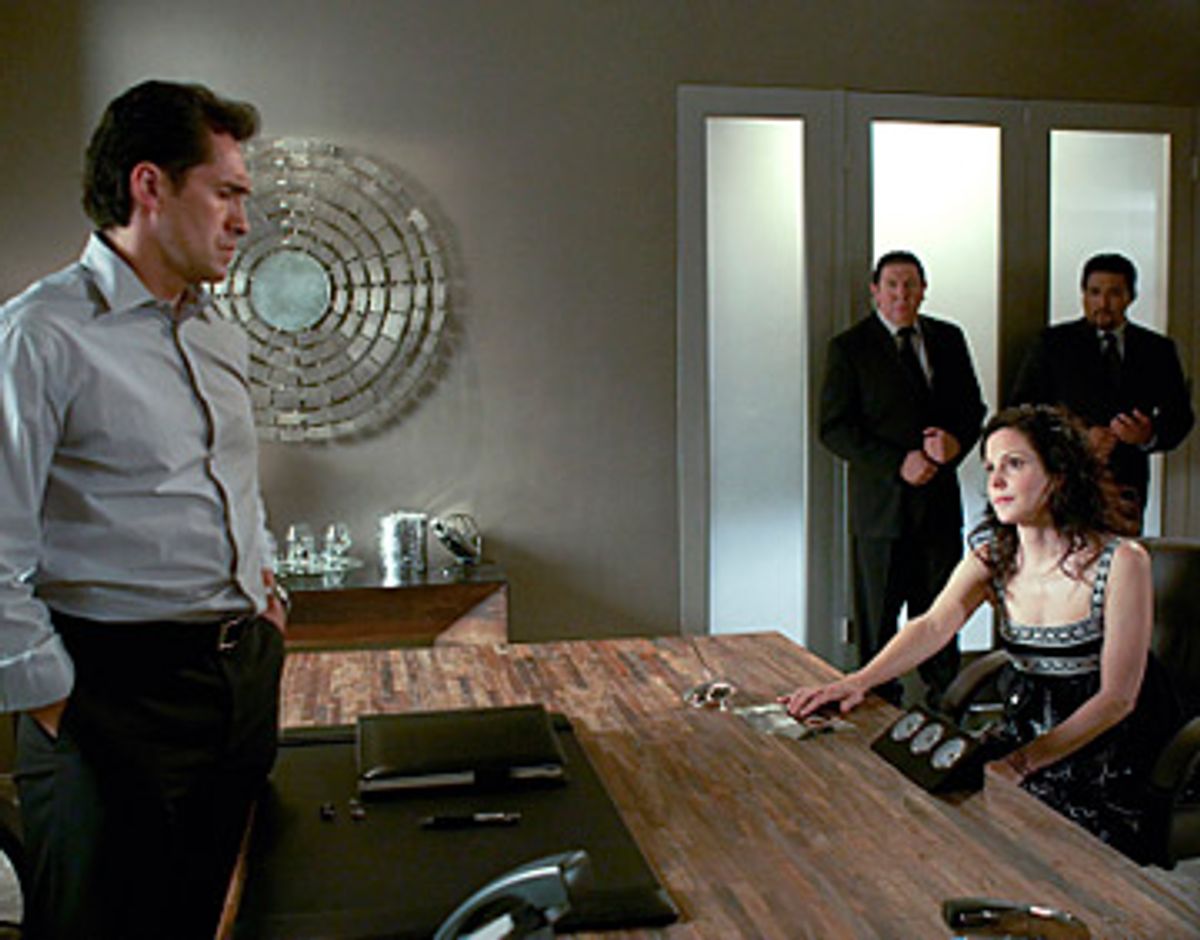 "I used to be able to rationalize the things I did. At some point recently, everything became right and wrong." -- Nancy Botwin

There you go again, Nancy. Discovering your moral compass at the least convenient moment possible, forsaking the lucrative illegal smuggling and the cushy work-free professional life that fell into your lap after just a few seconds of parading your milky-white legs around in a minidress.

Naturally, in the morally upside-down universe of "Weeds," the minute Nancy (Mary Louise Parker) locates some semblance of an ethical code, her world starts crumbling to pieces. By the time Monday night's fourth season finale rolled around, viewers were asking themselves the same thing they asked themselves at the end of last season and every other season before it: How will Nancy worm her way out of this mess?

Of course, having an affair with a sexy Mexican politician/drug kingpin while your teenage son screws an older divorcee (and sells pot out of her cheese shop) and your younger son aims to please an unsavory pair of oversexed rebel preteens does tend to lead to a familial apocalypse. But you wouldn't really know that, the way Nancy has drifted around her new seaside home of Ren Mar in a caffeinated daze, doing whatever her thug bosses demanded, including looking the other way when hard drugs, weapons and young girls (presumably being sold into sex slavery) started coming through the tunnel from Mexico that led into Nancy's maternity shop. It took a hallucinogenic wake-up call for Nancy to locate a conscience and inform DEA agent Captain Till about the whole ugly operation.

As much as I've enjoyed the much-needed change of venue and the unpredictable twists and turns of this season, there were admittedly fewer scenes that could make you laugh out loud than there were during the early seasons of "Weeds." When you think of some of Andy (Justin Kirk) and Doug's (Kevin Nealon) early encounters, getting high and musing over whether rat-infested pot is safe to smoke, then concluding that "fire kills plague," the duo's recent dalliances into smuggling illegal immigrants over the border look farcical but somewhat inadequate by comparison. And once Doug devolved into a lust-lorn stupor over his illegal girlfriend Maria and managed to gross her and everyone else out along the way, it fell in the same territory as Silas' (Hunter Parrish) and Shane's (Alexander Gould) affairs: vaguely amusing and vaguely disturbing, sure, but not really all that funny.

Celia's (Elizabeth Perkins) struggles with addiction were occasionally good for a laugh, but her fumbling and fuming hit the same comedic note over and over again. In making amends with her family, Celia had a chance to show us a new side of herself, but she went through the process of recovery with the same stoic stare and gritted teeth. Didn't Celia seem more multifaceted and colorful in the early days back in Agrestic? And her future path, being held for ransom in Mexico by her angry daughter Quinn (a character we forgot existed), seems destined to keep her in the same seething state indefinitely.

But it looks like the whole gang might relocate south of the border at this point: Silas and Andy are fired up to start growing pot down there, and by end of the finale, a move starts to look imminent for Nancy, too. As Silas and Shane seethe over Nancy's bad mothering at home, Nancy drives over the border to confront Esteban.

Flanked by his men, Esteban asks her again if she was the snitch. Nancy denies that she was involved. Esteban shows her a photograph of herself speaking to Till. Nancy, eyes wide, pulls her own photograph out of her purse: An ultrasound of Esteban's unborn child! "It's a little early to tell, but it feels like a boy."

Nancy, you dirty whore, you get yourself knocked up, then you use your unborn child's life to save your own? You are truly an inspiration to distracted, self-interested unwed mothers nationwide.

As the miscreants of "Weeds" mature into full-blown criminal nomads, let's hope that they don't abandon comedy completely for the sake of unexpected or farcical plot twists. Part of what made "Weeds" so addictive during its first two seasons was its grounding in the relatable, everyday life of suburban moms, small-minded city councilmen, resentful teens and ne'er-do-well potheads. While it may be fun at first to wipe away the old setting and start pulling fantastical scenarios out of a sombrero, some of the original charms of the show have been lost along the way. Maybe next season, even in the dusty hinterlands of Mexico, these scrappy outlaws will serve up the relatable stories and the laughs that had us hooked from the start.