Ed Harris and Viggo Mortensen poke along amiably in this easygoing western. 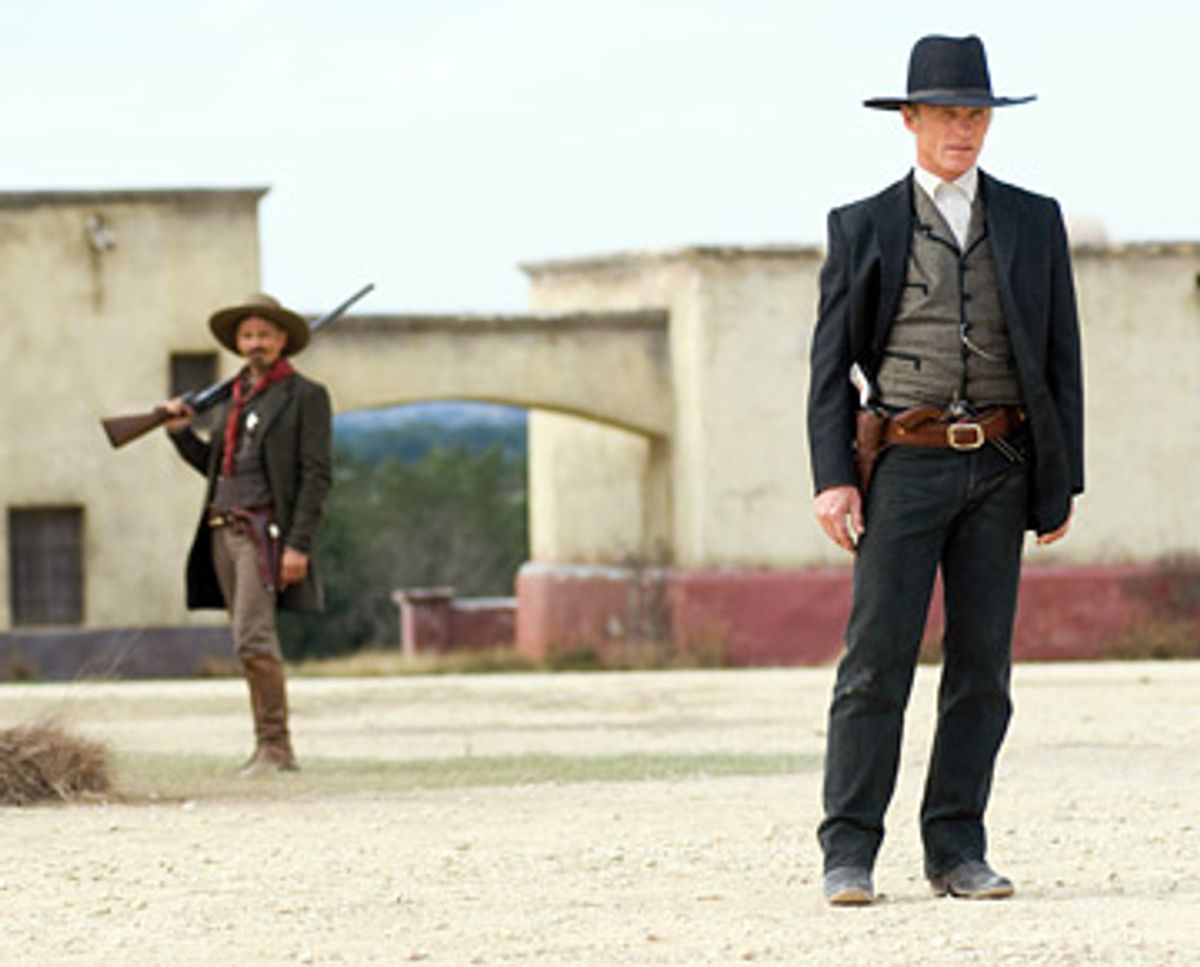 There are so few westerns being made these days -- last year's mini-resurgence, consisting of "The Assassination of Jesse James by the Coward Robert Ford" and "3:10 to Yuma," notwithstanding -- that it's tempting to give any filmmaker credit for being attracted to the genre in the first place. "Appaloosa," directed by Ed Harris (and adapted, by Robert Knott, from Robert Parker's novel), is just good enough that I wish it were better. The picture is leisurely and laconic -- a lot, come to think of it, like Harris, who also stars in the movie as a marshal who goes to a New Mexico town, circa 1882, to fend off a band of outlaws who do terrible things, like pissing willy-nilly in the local saloon. His name is Virgil Cole, and he has a longtime partner who's also his closest friend: Everett Hitch (Viggo Mortensen) is the only man Virgil shares his secrets with, and even then, he's pretty tight-lipped. He describes his experience, or lack thereof, with women to Hitch this way: "Mostly I been with horses and that squaw I told you about."

But a schoolmarm type -- actually, she's an organist -- named Allison French (Renée Zellweger) rides into town to change all that, threatening to sever the bond between the two men. The other threat to the Virgil-Everett team is the outlaws' boss, Randall Bragg (Jeremy Irons), a less-than-jolly rancher who aims to own the whole town. An elegant, scowling figure, at least he's a villain with class.

In fact, nearly everyone involved in "Appaloosa" seems to be having a pretty good time, striding through the landscape in their gun belts and broad-brimmed hats. (Only Zellweger, squeezed into a series of china-doll dresses and sporting drab, unflattering makeup, looks out of step.) The picture was shot, by Dean Semler, on location in New Mexico, so there's plenty to look at: Semler and Harris opt for lots of long takes, the better to soak up the landscape of scrubby bushes and bleached-blue skies.

But if "Appaloosa" is something to look at, it's also unnecessarily lethargic. Even an intentionally slow-paced picture needs to have its own internal source of energy, and as a filmmaker, Harris can't quite get that motor running. Sometimes Harris and Mortensen hit an easygoing groove in their repartee. Virgil is the one with the big ideas who can't always find the right word to convey his meaning. When he's lost, Hitch steps in with the proper term or definition: He knows the meaning of words like "disparaging" and "sequestered," and his skills come in handy when Virgil gets tripped up on his own terseness.

The duo's ambling ease with each other is appealing enough. It's simply that in the end, it's just too relaxed. Even when there's tension between the two characters, it doesn't feel particularly believable or vital. "Appaloosa" mines a comfortingly familiar theme: The picture is all about loyalty between men and its permanence compared with the flimsiness of romantic love. There's nothing wrong with reinterpreting those ideas for the millionth time. But the chemistry between characters has to be strong enough to draw us close, and Virgil and Hitch just aren't that magnetic. That's frustrating, because "Appaloosa" does have enough dashes of wry humor to suggest how much fun it might have been in the hands of a director with a better grasp of timing and pacing. When Virgil catches one of Bragg's baddies having a casual pee against the bar, he tells the ne'er-do-well, without missing a beat, "Put your little contraption away. I'm going to walk you down to the courthouse -- I don't wanna spook the horses."

At its best, "Appaloosa" has an endearing, oddball quality, but it could use more of those off-center laughs. It's high time for the western to be resuscitated as a genre; a picture that just pokes along amiably isn't enough to get the job done.