A new book looks at American masculinity and the dangers posed by disgruntled guys. 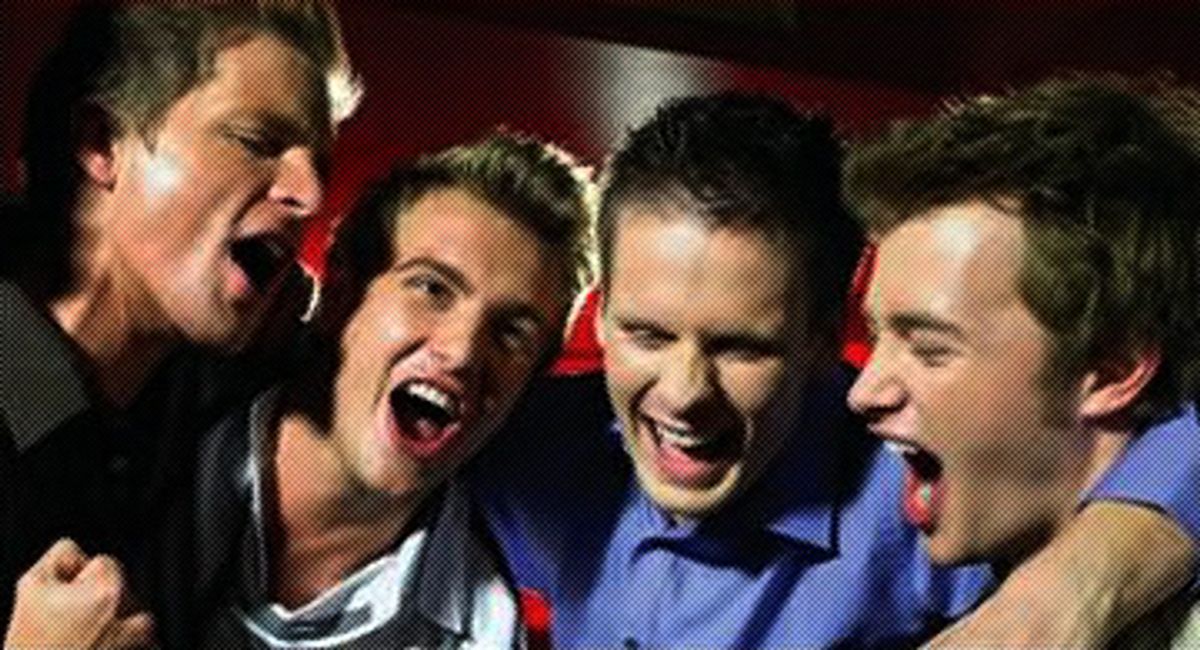 Imagine a world where you can't express your feelings. Where women are treated as objects or bargaining chips, and alcoholism and drug abuse are the norm. Where you must reject your own mother, and your father will rebuff you. You'll belong to a kind of cult that demands that you ostracize anyone who doesn't follow the group's twisted values. This cult may pressure you into physically and sexually abusing someone incapable of fighting back. If you're an American guy age 16-26, congratulations. You probably live there already.

This is especially true if you are white and heterosexual, according to SUNY-Stony Brook sociologist Michael Kimmel. "Guyland: The Perilous World Where Boys Become Men," his study of young American men, is a bleak and urgent yet compassionate analysis of young manhood in the United States. Kimmel coins the term "Guyland" not to suggest a place as much as a state of mind, an ideology into which the 400 or so young men he interviewed in the course of his research find themselves indoctrinated. He also uses the term to describe a stage of life, "a kind of suspended animation between the dependency and lack of autonomy of boyhood and the sacrifice and responsibility of manhood" -- a phase that in recent years has expanded into many guys' 30s.

While a fair number of Kimmel's observations about this new demographic are depressingly familiar, he warns that the dangers posed by disgruntled guys will rise the longer we tolerate, brush off and deny their bad behavior. "The stakes are higher, the violence more extreme, the weapons more lethal," he writes. School shootings, a relatively new phenomenon, are increasing. A new generation of girls who don't consider themselves feminists and people of color who oppose affirmative action may find themselves against a wall -- or a glass ceiling -- they thought their mothers had climbed over. All in all, reading "Guyland" has the same effect on a liberal as a good horror movie; it makes you terrified of something you're so used to that you probably manage to ignore it most of the time.

Kimmel pinpoints the cause of young white male frustration in another typically pithy coinage: "thwarted entitlement." You might call this phenomenon the blowback of the civil rights and women's and gay liberation movements, an ever-growing sense among young white males that women and minorities have snatched away the jobs and social positions that their fathers and grandfathers implied they could take for granted. Sure, it's hard for minorities to feel sympathy for white guys who seem to believe in personal responsibility when it comes to poverty yet claim that women and people of color are taking their jobs -- but they may do so at their peril. When large swaths of young men feel disenfranchised, violence is usually in the offing. If the guys Kimmel studies suddenly lost the ability to sponge off their parents, he implies, the effects of "thwarted entitlement" could easily spread out beyond the bad apples and erupt into various forms of chaos.

For Kimmel, dismissing rough stuff like bullying, porn addiction, hazing, binge drinking, hooliganism, gay-bashing and date rape as typical male behavior, or accepting that "boys will be boys," makes you an accomplice to Guyland's evils. While it seems obvious that these behaviors are unacceptable when they happen in other communities, Kimmel cites many cases in which those directly involved look away -- including the community in Mepham, Long Island, who in 2004 leapt to the defense of a football team whose hazing process included sodomizing frosh players with "pine cones, broom handles, and golf balls ... coated with [Ben-Gay equivalent] Mineral Ice"; or the guys in Glen Ridge, N.J., who infamously snuck away when their fellow athletes gang-raped a "slightly retarded" girl in a basement, but never notified authorities, and refused to betray their teammates once the scandal broke.

Kimmel's passion for his subject matter comes through in his thoroughness and supporting detail, but primarily in a journalistic prose style that drops few academic bombs and frequently has the insistent cadence of a commercial for an NGO: "Boys are underperforming in school, bullying and hazing are ubiquitous, and violence is a daily reality in many boys' lives," he writes. "And when you factor in the suicide attempts, the self-medication, the violent outbursts, or the sullen withdrawals, it's clear that we must devise strategies to enable all sorts of boys to feel safe enough to go to school, and secure enough that they will be valued for who they are."

The strategies Kimmel suggests for helping young men escape this deeply entrenched conception of masculinity, however, sound like an earnest college professor's pipe dream: "We need to develop a pedagogy of resilience," he says. Boys need a "charismatic adult," he proposes, "a person with whom they can identify and from whom they gather strength." The latter seems obvious, the old "role model" solution, but the pervasiveness and dominance of Guyland's values, which are essentially racism and sexism lite, demand a more sweeping response that directly addresses the schoolyard premises on which they're based.

The world of adolescent white males that Kimmel describes puts macho boys in a curious double-bind. "The most common put-down in American high schools today is 'that's so gay,' or calling someone a 'fag,'" he tells us. "The average high school student in Des Moines, Iowa, hears an anti-gay comment every seven minutes -- and teachers intervene only about 3 percent of the time." They use "gayness" as the foul line that contains their masculinity -- and a pretty juvenile definition of homosexuality at that, according to Kimmel. To them, a homosexual man "walks a certain way" and is "sensitive." A high school girl, depressingly, is likely to suspect a boy of being gay "if he's interested in what she's talking about" or "is a good listener." These young guys think being gay "means not being a guy. That's the choice: gay or guy." Instead of throwing up our hands and saying "This is nothing new," Kimmel would have us ask, "Why haven't we erased this kind of prejudice in our children in 2008?"

Though these guys may gay-bash, their behavior is homosocial -- that is, they aren't trying to impress chicks with their mad Wii skills. As alpha male playwright David Mamet notes, "Women have, in men's minds, such a low place on the social ladder ... that it's useless to define yourself in terms of a woman. What men need is men's approval."

Of course, the line between the homosocial and the homoerotic can get pretty blurry. In liberal-land, straight men can be freely metrosexual, embrace each other (briefly) and even speak openly about their feelings, but not even there are they safe from homophobia. Nor is that the demographic the book is concerned with; the metrosexual is usually a sophisticate who has left boyhood, not a college freshman in Colorado. Kimmel is describing a group of intensely frustrated guys who desperately want to connect with each other emotionally and/or physically but can't do anything that seems even remotely "gay," which includes things as simple as touching each other nonviolently. This impulse can get badly repressed: Kimmel describes a participant in a gang rape who "reported his pleasure at feeling the semen of his friends inside the woman as he raped her ... Was the woman merely ... the vehicle by which these men could have sex with one another and still claim heterosexuality?" he asks.

The kinds of guys Kimmel analyzes -- mainly college dudes from across the U.S., including those from bastions of maleness like the Citadel -- seem like they could learn a lot if they were to spend a year living as gay men. This is meant neither in a "Queer Eye" sense nor in a "get those gay feelings out of your system" way, but as a method of infusing the things that Guyland's brand of masculinity lacks most: experience and perspective. No sex required, just a look at proof that the choice between "gay or guy" is a false one, and a chance for the most bigoted homophobes to face something they don't realize that they fear irrationally. Would Clint Eastwood cower in terror before "Project Runway" winner Christian Siriano? (Any more than the rest of us tired bitches, I mean.)

Unfortunately, no one's immune to the cult of masculinity -- neither gay men nor Kimmel. What would be required to change these attitudes is nothing less than the eradication of sexism and homophobia, and that might necessitate a grander solution than Kimmel feels comfortable proposing, along the lines of what Spanish Prime Minister Jose Luis Rodriguez Zapatero has done to combat machismo in the country most famous for the concept. Zapatero and his minister of equality, Bibiana Aido, have risked ridicule by suggesting that the language be altered to reflect gender equality, and that the monarchy extend the right to the throne to firstborn females. Kimmel doesn't think that big; he believes some concessions should be made to male dominance, pointing out that gay-straight student alliances in high schools only work when macho guys take part.

It's practically a testament to the saturation of these values in our culture that Kimmel ends up relying on a definition of maturity created by social scientists, he says, in 1950. The five events that indicate adulthood are "leaving home, completing one's education, starting work, getting married, and becoming a parent." Two of these indicators are themselves heterosexist -- getting married and having children are new phenomena for some people, and far more optional than they were 58 years ago. Adulthood perhaps more commonly arrives these days in packages that have nothing to do with heterosexual identity or marriage: adopting a child, buying property, taking on greater responsibility at work, caring for disabled relatives, the death of one's parents, etc. When the circumscribed boy-men of "Guyland" grow up, it seems, they still graduate into Man's World, where their brutal philosophy can influence all of our lives just a little, whether we want it to or not.