Obama and the rules for Angry Black Men

Why does Barack Obama have to be Virgil Tibbs? Or Denzel Washington in "Crimson Tide"? Or any other angry black archetype? 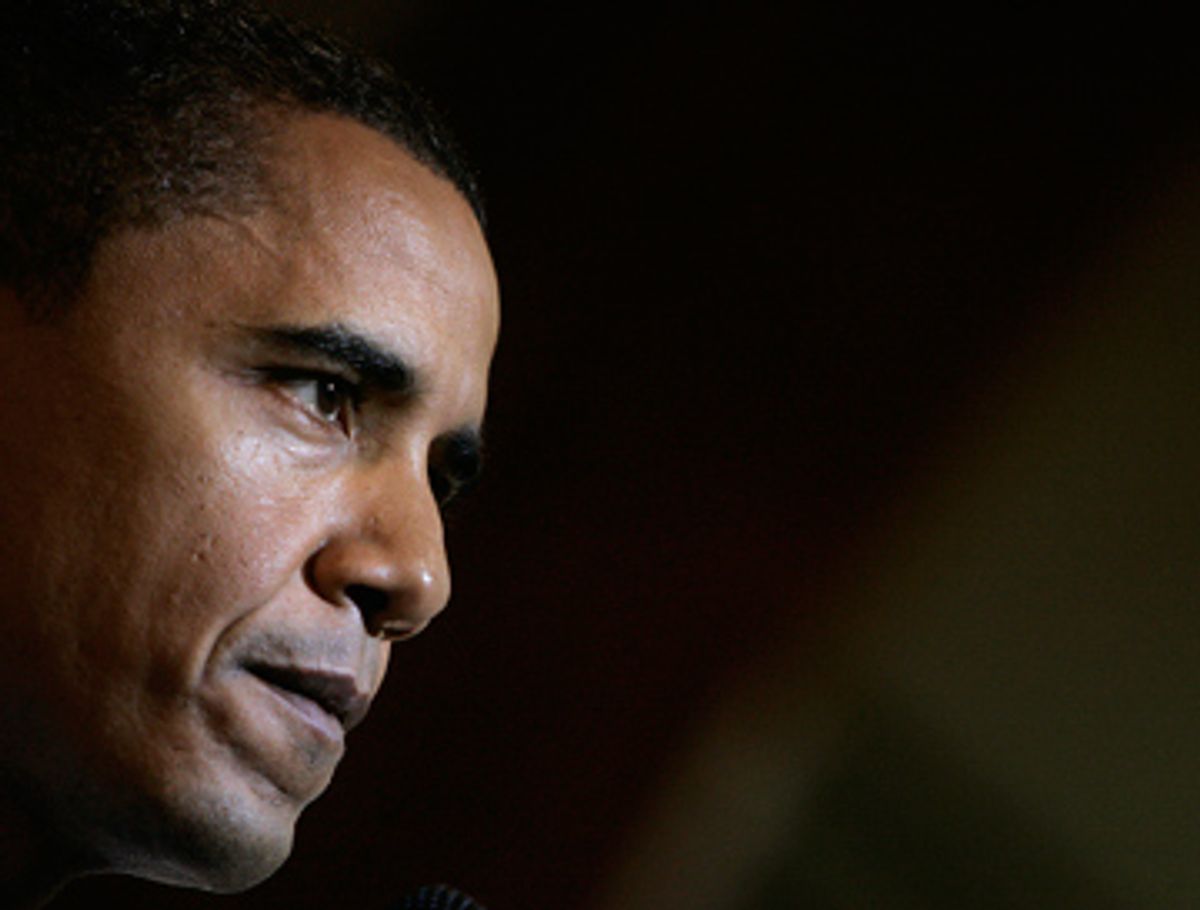 By using the phrase "the angry left" in his speech to the Republican National Convention, George W. Bush pulled a classic bully move: provoke your opponent and then mock his rage. For if the left was merely irritated at the start of the last eight years, only W's puppet master, Vice President Dick Cheney, has done more to incite that anger -- or rather, to grind it, hone it, to plunge it headlong into a blazing kiln, to blast it through a Large Hadron Collider and create world-imploding black holes of fury. Republican presidential candidate John McCain has sucked up to the established kleptocracy, waging a Karl Rove-ish smear campaign, and cynically hired an ingénue, Sarah Palin, as a running mate not only because she has a vagina but because she believes it should be strictly policed. The "angry left" has an OED-size book of good reasons to be wrathful where it concerns the Republican Party. So why won't Barack Obama channel the outrage surging through his constituency and explode in fire-and-brimstone oratory?

The conventional wisdom is that Obama isn't angry enough. After his speech at the Democratic convention, MSNBC's Keith Olbermann asks Obama, perhaps hopefully, "Have you thought about getting angrier?" Thomas L. Friedman, writing in the New York Times, implies that he wants to see more theater in Obama's oratory: "I thought his convention speech contained no memorable lines or uplifting visions. It never got me out of my seat." This sounds like someone complaining about the acting in a Wesley Snipes action film, not about the rhetoric of a presidential candidate. Friedman then implies that Americans respond best to the melodramatic package in which political ideas are sold, not the ideas themselves, and quotes Neil Oxman of political P.R. firm the Campaign Group, who conflates Sarah Palin's popularity with Roseanne Barr's. Will this campaign really come down to something as asinine as theatrics? In a close race, the answer can often be yes. There was something chilling in Walter Mondale's sadly resolute quip after losing the 1984 presidential election: "Modern politics today requires a mastery of television," he said. "I have never really warmed up to television and television has never warmed up to me."

Even Arianna Huffington, who 10 years ago considered herself a conservative, has found herself frustrated with Obama's unflappable demeanor. He has remained calm and collected, "professional" you might say, even when McCain accused him of promoting sex ed for kindergartners -- which is not that upsetting as a concept when you think about it; kids all want to know where babies come from. What's infuriating is that the ad represents the Republicans' roundabout way of implying that a vote for Obama might enable child molesters or cross some other undefined erotic line. "Now, as the crises facing our country intensify," Huffington writes, "and the campaign McCain is running becomes sleazier and more trivial, it's time for Obama to unleash his inner Atticus -- or at least the key element of Finch that Obama seems reluctant to embrace: righteous rage." By Atticus, Huffington means Atticus Finch, the determined lawyer from Harper Lee's novel "To Kill a Mockingbird" who risks his status and possibly his life to defend a black man accused of raping a white woman in mid-20th-century Alabama. Huffington's analogy begins with the obliquely racialized "Mockingbird" -- Gregory Peck plays Finch in the film version -- then goes overboard when she includes a cinematic montage of articulate black rage to illustrate the sort of indignation she demands of Obama: Denzel Washington vs. Gene Hackman in "Crimson Tide," Morgan Freeman in "Lean on Me," Don Cheadle in "Hotel Rwanda," and last but not least, "In the Heat of the Night's" Sidney Poitier defiantly asserting the respect he gets at home: "They call me Mr. Tibbs!"

Where to begin? There's something off-putting about choosing to demonstrate this point with exclusively black heroes -- and fictional ones, at that. No Thurgood Marshall? No MLK? Huh? Furthermore, rage has no color, especially not in an election like this, and after the hell Obama caught for refusing to renounce the Rev. Jeremiah Wright, why would he then do an impersonation of the guy? While different from the "angry black man," the "righteous black hero" is just as much a stereotype, a flat character created to promote the fantasy that oppression naturally generates moral fiber -- that is, the diamond formed by pressure, the rose that grows up through concrete. Morgan Freeman owes his fortune to playing roles that "reverse" our expectations about the status of black men in America -- God in "Bruce Almighty," and tellingly, in 1998's "Deep Impact," President Tom Beck. Like the words "articulate" and "clean" in the mouth of Joe Biden so many forgivenesses ago, or the big dick thing, it's a positive archetype, and therefore less likely to start fights. But it nevertheless diminishes a group of complicated people to a single mode of expression.

The media's in danger of falling into what I can only describe as a "take me, Mandingo!" mentality where it concerns Obama's anger. When you are a black man, many people (even other black men, and especially strangers) tend to react to your physical presence as if you are "a black man," whatever that happens to mean to them at the time. Sometimes these people indulge their obtuse assumptions in the face of hard evidence: No, I don't play basketball. The facts ought to be enough to limit these people's attempts to make themselves more comfortable by presuming that you conform to their expectations. But some bias seems hard-wired; it persists beyond logic. Old ladies may clutch their handbags, cross the street when walking in front of you, policemen may search your trunk on a routine stop, etc. It doesn't matter if you're Biggie Smalls or Urkel.

To say the least, suggestions like Huffington's and Friedman's promote a Hollywood notion of how black men should react to injustice. We think that it's fine to wonder why Obama refuses to conform to some cinematic dream of noble negritude. The eye-opener is that these kinds of expectations aren't even evidence of racism as much as generic prejudice -- women, white men, Asians, everybody has to face similar assumptions. The implications can be particularly dire for women and people of color, though, because the prejudicial beliefs tend toward viciousness: she's a whore, he's going to carjack me. So Obama is damned if he performs his black anger too fiercely -- that would give biased people the impression that he's an "angry black man" or worse, an extremist, and therefore unelectable. But now he has to face criticism from the left because he's not performing his anger -- a specifically black, unreal variety of anger, remember -- in the correct measure.

Like a lot of people, I too would like to see Obama draw more definite lines in the sand, or to see someone take the Republicans to task for their misdeeds without backing down or qualifying their statements with one of those they-must-love-their-children-too type concessions. But I have no desire to see Obama's revenge take the form of a snitty Mr. Tibbs or a Morgan Freeman hero. Obama clearly has his own style; we ought to see his intelligent use of understatement as a strength. Isn't his call for "enough" enough?