Like George W. Bush, McCain and Palin have to lie. Because if they told the truth about their policies, they'd lose the election. 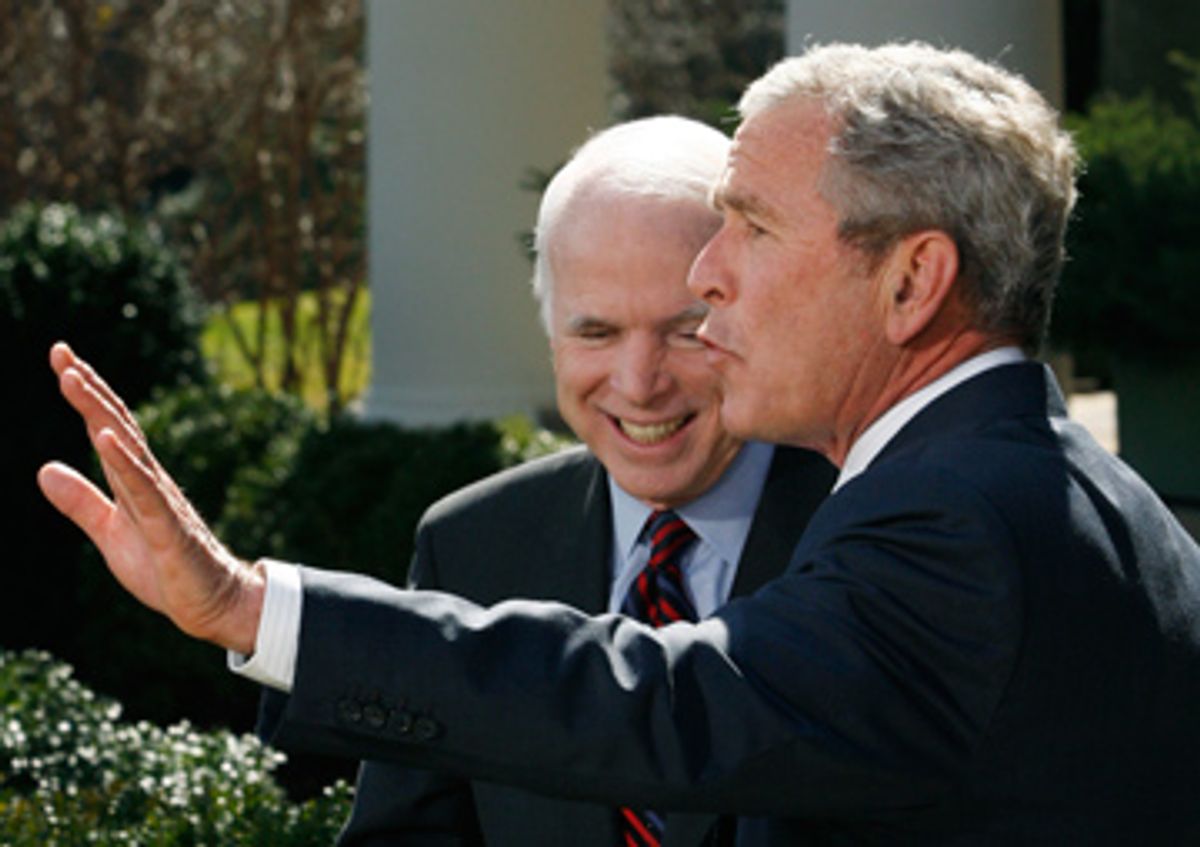 Eight years after the travesty of the 2000 election, in which the media were prone to emphasize Al Gore's exaggerations while letting George W. Bush off the hook, Republican politicians finally are being called out on their dishonesty. "The biggest liar in modern political history," writes Michael Tomasky, the editor of the Guardian America, about John McCain. There are indeed so many lies associated with the Republican campaign that one can pick and choose at random. My favorites are the efforts by the McCain campaign to portray Obama as being in favor of teaching sex education to 5-year-olds and the Spanish language ad accusing him of opposing immigration reform. Your favorites might include McCain's claim that Obama will raise taxes on the middle class or his statement to the women of "The View" that Sarah Palin never requested earmarks.

McCain's propensity to lie has become what political junkies call a meme, an idea or behavior that runs, seemingly unstoppably, from one media outlet to another. Some bloggers offer daily counts of how many falsehoods McCain tells while others wonder why the Democrats do not respond in turn. Even the mainstream press has gotten into the act. One of the pleasures of the 2008 campaign -- I admit they have been few and far between -- is watching all those who once admired John McCain for his truthfulness realize the true depths of his moral depravity. When McCain is linked to Palin, moreover, as he so frequently wants to be, lying experiences something of a multiplier effect. These candidates lie so much that they have taken to lying about their own lies.

Before we get carried away with enthusiasm about all this, though, we should keep two things in mind. One is that we are so quick to label McCain a liar that we tend to forget how much, and with what horrendous consequences, George W. Bush possessed the same character flaw. The other is that Republicans lie so frequently, not because the party just happened to settle upon one serial liar after another to run for high office, but because the form of conservatism to which they all adhere demands that if they are to win they have no choice but to lie.

In the 2000 presidential election, George W. Bush, then something of a political unknown, claimed to be a compassionate conservative and promised the country a "humble" foreign policy. Lies both. Compassionate conservatism was a brilliant campaign slogan, an attempt by Bush to persuade independent voters that he was not a raving madman like Newt Gingrich, who had urged, in true Dickensian fashion, the building of orphanages to solve the welfare problem. Long before the public had ever heard of Rick Warren, Karl Rove understood that the evangelical base of the Republican Party wanted language more uplifting than traditional Republican red meat, and the idea that conservatives were in fact more compassionate than bureaucratic liberals provided it. In actuality, as we now know, Bush wanted to privatize Social Security, the most compassionate program ever adopted in this country, and was simply waiting for the right opportunity to do so.

Bush spoke in 2000 of a humble foreign policy for much the same reason. We now also know that the Bush-Cheney administration was intent on adopting the most aggressive American foreign stance possible, and that the events of Sept. 11, 2001, offered them the public justification for actions they had been secretly planning since taking office. We tend to forget that before Sept. 11, aggressive foreign policy moves were not all that popular. Americans wanted a peace dividend in the aftermath of communism's collapse and seemed hell-bent on turning inward to their private pursuits. In that context, offering them a humble approach while planning a militant one constituted as dramatic a lie as one can imagine.

I would never challenge the argument that John McCain's lies in 2008 are over the top. But if McCain is more serial a liar than George W. Bush, it is a matter of degree rather than kind. Bush's lies, after all, led to thousands of needless deaths, and none of John McCain's lies, at least to this point, have done that. Were he to find himself elected, McCain would no doubt lie about many things, such as whether the United States has engaged in torture or whether Iran is a genuine military threat to the United States. But the bar has been set way too high; given the mendacity of the Bush administration, I am at something of a loss to imagine that a McCain administration could lie more.

Why do Republicans lie so much? Why is McCain following the Bush script? Why, at the very moment when he wanted a "maverick" by his side, did McCain pick a congenital liar to be his running mate? Republicans engage in what I can only call "structural lies." To understand what this means consider this: Just about every significant lie uttered by Republican politicians is designed to make them seem less conservative than they really are.

The current lie du jour of the McCain campaign is that their man will aggressively take on the greed that is causing the collapse on Wall Street. Given McCain's lack of interest in the economy, wealthy campaign contributors, and ideological hostility toward government regulation, this stance is laughable. But McCain's lie unconsciously reveals an important truth, which is that when the economy goes into a tailspin, the public prefers a solution long identified with liberalism. McCain could tell the truth, which is that he is all for the free market and can barely wait until the crisis passes so the rich can go about the business of becoming ever richer. But if he does that, he will lose. McCain wants to win. Therefore he lies.

It is not just the economy that features this structural dynamic. If you were just tuning into the election now -- no doubt there are many Americans who have not quite tuned in yet -- you would think that the Republican Party loves workers, hopes to redistribute income to the lower middle class, embraces immigrants, favors environmental protection, and hates war. Some of the Republican lies, to be sure have nothing to do with policy, such as false estimates of the size of the crowds attending Republican rallies or Sarah Palin's announcement that she had sold the Alaska governor's plane on eBay, but of those that do, the overwhelming majority are designed to make the Republican ticket more humane and moderate than it actually is. Only on foreign policy, where McCain shows no interest in hiding his hawkish instincts, can the ticket claim to be taking an honest position even if the face of public skepticism.

Conservatism is an honorable political philosophy whose most eloquent spokesmen, such as John Adams and Edmund Burke, proclaimed the truth as they saw it. This is a tradition that continues among all those contemporary conservatives who have been appalled at the direction the McCain camp has taken and have been willing to say so publicly. In contrast, the conservative populism that has swallowed up the contemporary Republican Party lies because conservative populism is itself a lie. It claims to be guided by faith when it is run by corruption. It speaks of diversity but remains overwhelmingly white. It uses women to push an agenda that would expose women to harm. It speaks of reform tomorrow to slash the reforms of today. It seeks popular support to enact policies that, if revealed for what they were, would be wildly unpopular.

Like so many of John McCain's critics, I find myself astonished at the sheer brazenness of the lies he tells. But this is not because McCain is more dishonorable than Bush. It is because the conditions under which a truthful Republican could be elected in 2008 are much more difficult than they were in 2000. Through sheer incompetence and cronyism, George W. Bush showed Americans just how dangerous conservatism can be. Because he did, those conservatives who would succeed him face even more difficult obstacles placed in their path to power. In the past, they might have gotten away with lying occasionally. This will no longer do. Expect, therefore, as the country turns to the debates ahead, that John McCain, when addressing issues of foreign policy around which he has been remarkably honest, will begin to lie in that area as well.