How the vice-presidential nominee brought fringe biblical teachings to her work as the chief of Wasilla, Alaska. 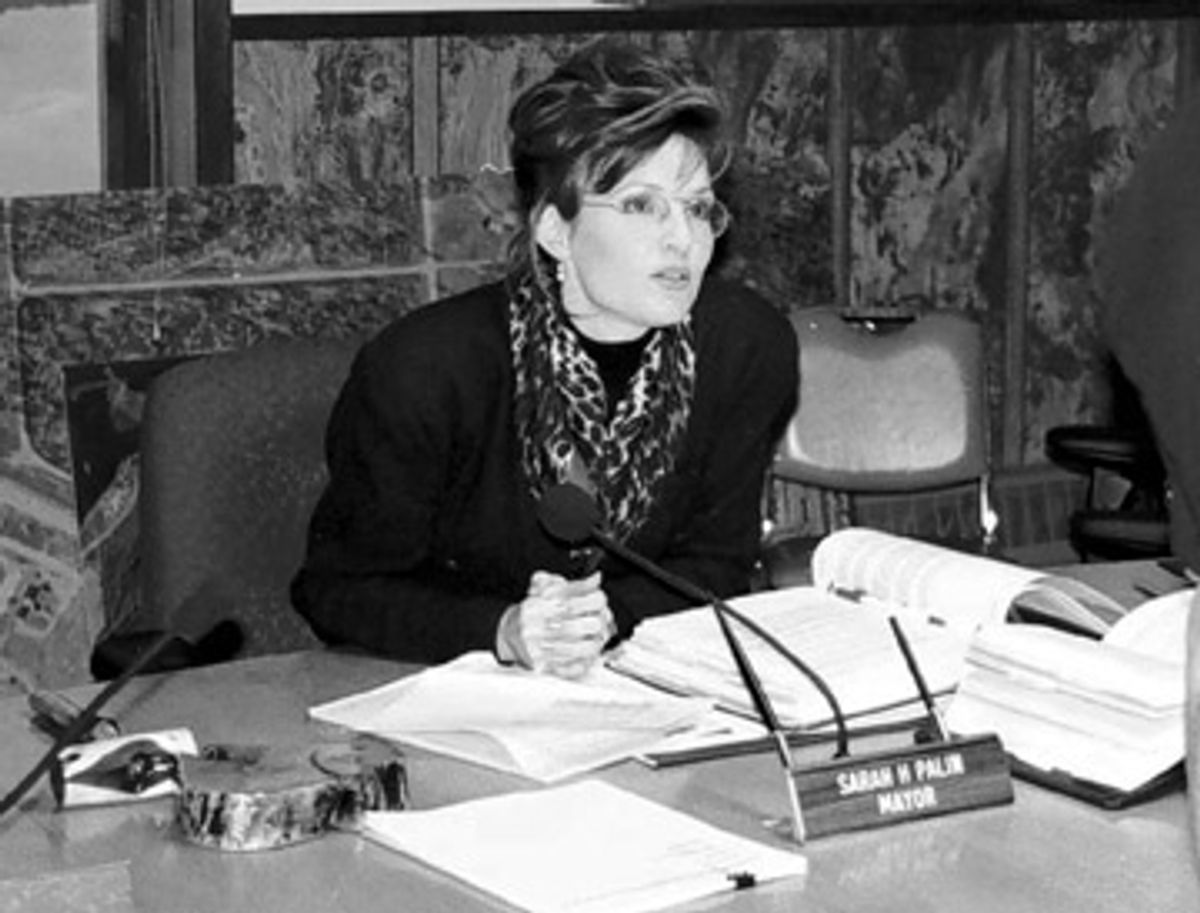 In April 2000, under the direction of then-Mayor Sarah Palin, the Wasilla City Council passed a resolution declaring itself a "City of Character." Adopted unanimously, the resolution pledged that the city would "do all in its power" to promote "positive and constructive character qualities which distinguish between right and wrong," which the resolution predicted could work a range of wonders, from reducing juvenile delinquency to increasing corporate profits.

Thanks to Palin's efforts, Wasilla is now among roughly 200 cities nationwide (and others in 27 countries around the world) that have committed themselves -- in name, at least -- to following the teachings of the International Association of Character Cities (IACC), an organization that purports to be secular but is modeled on the evangelical teachings of the Institute in Basic Life Principles (IBLP).

Palin's personal connection to IACC, and her efforts to bring its agenda to Wasilla as mayor, sheds new light on her connections to the Christian far right, as well as her willingness to infuse government with its ideals rooted in religion. Her championing of IACC principles raises further questions about Palin's views on running government, including the hiring and firing of government employees, an area in which she has come under intense scrutiny in part due to her involvement in "trooper gate."

By becoming a City of Character, Wasilla under Palin committed to adhering to 49 "character qualities" as outlined by the IACC, which are secularized versions of IBLP's 49 "character qualities" derived from the Bible. Critics have charged that the organization and its affiliated Character Training Institute are for all intents and purposes a front group for the evangelical IBLP.

IBLP was founded in 1974 by evangelist Bill Gothard "for the purpose of introducing people to the Lord Jesus Christ," and is "dedicated to giving individuals, families, churches, schools, communities, governments, and businesses clear instruction and training on how to find success by following God's principles found in Scripture." IBLP claims to have taught over 2.5 million people its Basic Life Principles seminar, and boasts assets exceeding $100 million, an affiliated correspondence college course program and an unaccredited law school.

The IACC, says its director, Steven Menzel, is not a religious organization. Instead, he points to its practical effects. When IACC's founder, Oklahoma City businessman Thomas Hill, was having difficulties with the workforce of his company, Kimray, in the 1990s, IACC legend has it that his adoption of Gothard's "character approach" led to a 90 percent drop in workers' compensation claims and a 60 to 70 percent drop in turnover. "The change in that company was so profound," said Menzel, that local companies asked Hill to teach "character" to them as well, leading to the Character First program that is the backbone of IACC and CTI.

Palin, Menzel confirmed, learned how Wasilla could become a City of Character at an IACC conference held at IBLP's International Training Center in Indianapolis in April 2000. A conference brochure shows that Gothard and other speakers affiliated with IBLP taught several of the sessions. The conference included a videotape presentation on the separation of church and state by David Barton, a regular on the Christian right speaking circuit who argues that the separation of church and state is a "myth."

Although Menzel and the IACC's materials insist that the program Hill launched at his company is secular, IBLP's Web site boasts that as a result of Hill's efforts, Kimray "benefited from the application of Biblical principles." Menzel admitted to the Texas Observer two years ago that "these are biblical principles." Hill has ties to Gothard dating back to 1974; he served on IBLP's board of directors from 1993 to 2005, and is currently on its "board of reference."

Gothard's teachings, and his implementation of them, are highly controversial even among evangelical Christians. Based on seven "non-optional" biblical principles, Gothard demands obedience to "God-ordained authorities, such as parents, government, and the church."

In 2003, the flagship evangelical magazine Christianity Today observed, "an important issue to consider regarding Gothard's influence is that it is directed to the core leadership of our nation's conservative Christian churches. Gothard has largely succeeded in reaching that audience. While many have winked at Gothard's teachings on authority, what's more alarming is how readily his supporters accept his interpretation of Scripture," which he reads "through an authoritarian lens."

The teachings have bubbled beneath some disturbing events. Matthew Murray, who shot two people at a Colorado church last December, blamed his troubles on his authoritarian home-school curriculum from IBLP. Gothard denied that his curriculum played any role in Murray's dysfunction.

In Indianapolis, a City of Character, an IBLP-run juvenile center -- housed in the same building where Palin attended the April 2000 conference -- was embroiled in an investigation of child abuse, including spanking and restraining children and committing them for days to the solitary confinement of a "prayer room" without food. The center was cleared after a state investigation in 2004, although it did abandon the practice of spanking while under scrutiny, according to news reports.

Through its Character First training seminars, IACC has spread its gospel of character to local government officials like Palin as well as to Fortune 500 companies, law enforcement agencies, federal government agencies, and the private prison giant Corrections Corporation of America, which uses the character training in its prisons. Character First principles are taught in hundreds of public schools across the country.

Each of the 49 character qualities, as outlined by Gothard, have a biblical basis and are therefore required for believers to fulfill God's goal "to transform them into the image of His Son so that they may be a reflection of the character of Christ." The character quality of diligence, for example, is rooted in Colossians 3:23 ("Whatever you do, work at it with all your heart, as working for the Lord, not for men,") meaning, for Gothard, that one should "visualiz[e] each task as a special assignment from the Lord and us[e] all my energies to accomplish it."

IACC's secularized version requires one to "invest my time and energy to complete each task assigned to me," and is compared, like Gothard's version, to the diligence of a beaver. (Each character quality is linked to an animal, although apparently none to the barracuda.)

The desired implementation of a City of Character's mission is somewhat murky. Menzel advocates using the character qualities as a guide for hiring or promoting employees, and suggested advertising the "character quality of the month" through posters and billboards. He could not point to a policy initiative Palin undertook as mayor to advance the character initiative, and he expressed disappointment that Wasilla, Alaska's only City of Character, had not done more to advance the cause.

But Sandy Holladay, who heads the Alaska Councils of Character, which works with the IACC to encourage more municipalities to become Cities of Character, notes ways in which the teachings permeated the town government under Palin. Holladay, who said she met Palin once, in 2001, said she recalled that Wasilla put the teachings' "character quality of the month" on city employee paychecks and utility bills, and displayed posters provided by the CTI. (Utility bills in Wasilla began bearing the words, "Wasilla: A City of Character! Help us promote good character in our community!" shortly after the resolution passed.)

Mary Bixby, executive assistant to Wasilla's current mayor, Dianne Keller, said that the city no longer sends a representative to the CTI conferences, but it still receives materials from the organization. The city gives out certificates of good character to citizens who do "heroic deeds," she said, like turning in a lost wallet to the police department, and recognizes employees of "good character" in the employee newsletter. She said she admires the book outlining all the character traits, which she did not view as religious in nature, and added she would like to do more to study and promote it.

Menzel maintains that Palin exhibited the character quality of discernment, because after she took in the program at the Indianapolis conference in 2000 "she immediately returned to Wasilla and implemented it." Menzel described discernment as "understanding the deeper reason of why things happen." (Gothard describes it as "the God-given ability to understand why things happen.")