Keira Knightley charms and devastates in this lavish -- and juicy -- costume drama. 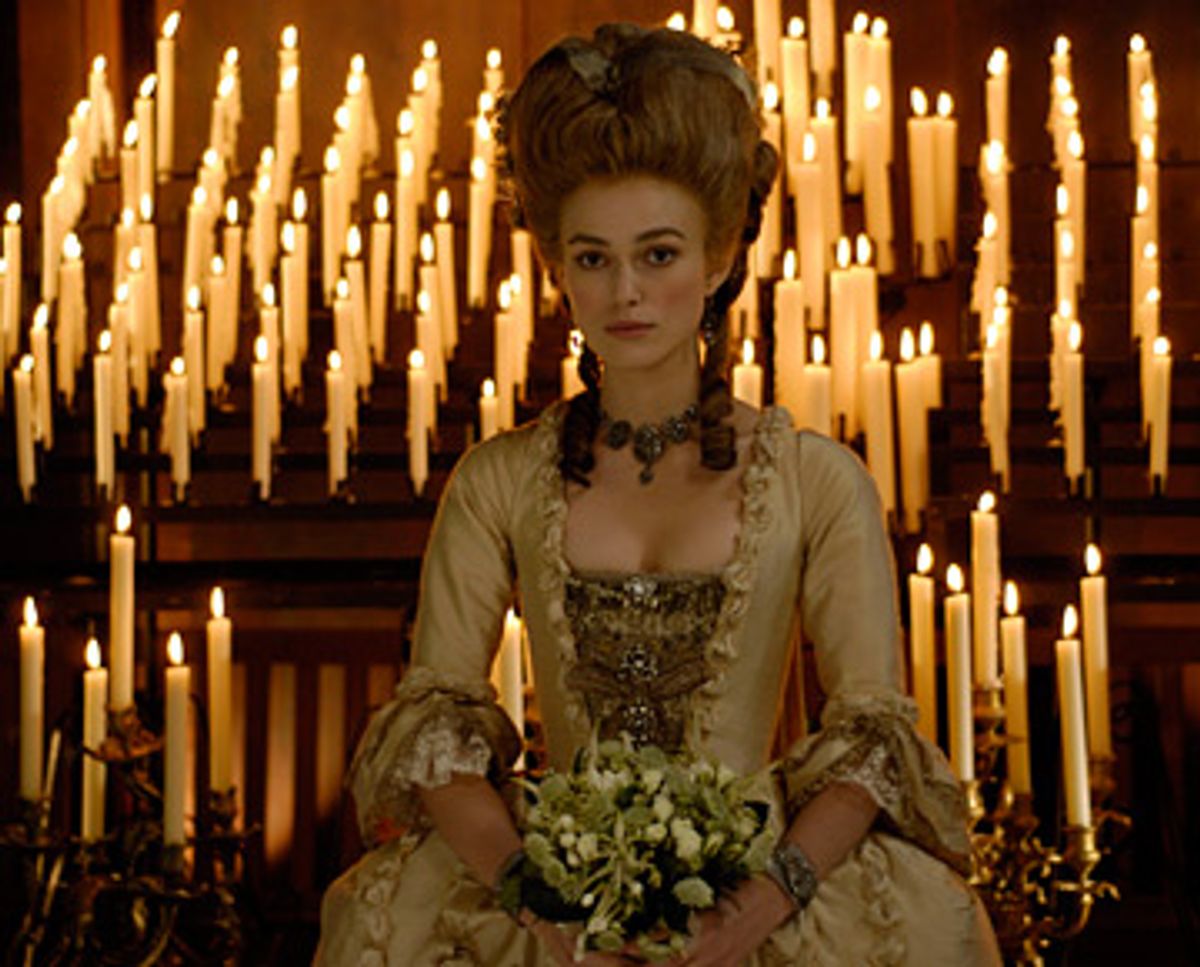 Saul Dibb's "The Duchess," a lavish adaptation of Amanda Foreman's biography "Georgiana, Duchess of Devonshire," sometimes creaks under the weight of its own hoop skirts. This is the problem with so many costume dramas: Unless they're jazzed up with anachronistic touches, they can come off as stiff and stuffed, partly because the formality of old-fashioned language seems so strange to modern ears. It could be that Dibb, whose previous credits include an adaptation of Alan Hollinghurst's "The Line of Beauty" for British television, isn't a seasoned enough director to maintain suitable levels of historic authenticity while also allowing his picture to breathe. At times, the movie feels constricted and pinched, a case of the corset strings having been drawn too tightly.

And still, there's life at the center of "The Duchess," in the form of Keira Knightley. She carries the weight of the movie around her effortlessly -- and this is a rather slender girl to be bearing a historical parade float of this size. Knightley plays Georgiana Spencer, a spirited young girl who's married off by her mother (played here by an imposing Charlotte Rampling), circa 1774, to William Cavendish, soon to become the fifth Duke of Devonshire. Georgiana finds the match perfectly agreeable, but we, of course, see trouble ahead: Her husband-to-be is played by Ralph Fiennes, with those glinty eyes and stretched-thin lizard lips. How could that possibly be good news? Sure enough, William is the kind of guy who coos to his dogs in baby talk, while barely acknowledging his wife except to mount her. William has married Georgiana not out of love, but because he believes she'll bear him a son. Meanwhile, as Georgiana gives birth to two daughters (while also raising one of William's illegitimate children as lovingly as if she were her own), he messes about with any young filly who strikes his fancy.

"The Duchess" chronicles Georgiana's quest to find some sort of happiness for herself even as she strives to honor the contract of her marriage, and the movie's saving grace -- aside from Knightley's presence -- is that the story is incredibly juicy, as well as heartbreaking. Georgiana, as Knightley plays her, isn't the sort to be wholly undone by rejection. While she laments the fact that her husband doesn't love her, she also enjoys the perks her status affords her: She engages the men in her social circle with witty and informed political discourse, and they in turn adore her; the women can't get enough of her crazy outfits, many of which she's designed herself. (Michael O'Connor, the movie's costume designer, does right by his star: Knightley shimmers through the picture in frothy, satiny dresses that make her look like an elaborately decorated birthday cake on wheels.)

And even if Dibb sometimes lets the pace drag a bit, he's always in sync with the spirit of the story. There's no need to reframe that story in aggressively modern terms -- or to force comparisons with the story of Georgiana's descendent Diana, Princess of Wales -- because the narrative feels modern already: We watch as Georgiana tries to define the terms of an open marriage (her love interest, the future Prime Minister Charles Grey, is played by Dominic Cooper) and comes up instead against the old double standard. Even her friendship with Bess Foster (played by Hayley Atwell), a close but sometimes troubled kinship, seems defined less by the era in which it took place than by the personalities of -- and the chemistry between -- these two women. There's even an intense, if purely fictional, semi-seduction scene between the two that puts the limp grappling between Scarlett Johanssen and Penélope Cruz in "Vicky Cristina Barcelona" to shame.

The raw material here would be a pile of riches for any actress to dig into, and the screenwriters give Knightley plenty to work with. (The script was adapted by Dibb, Anders Thomas Jensen and Jeffrey Hatcher, the last of whom is the screenwriter, and playwright, behind "Stage Beauty," as well as the writer of the underappreciated bonbon "Casanova," starring the late Heath Ledger.) And Knightley doesn't let them down. I've come a long way with Knightley over the years, from finding her almost unbearable to watch (I just couldn't get past the skeletal planes of her face) to falling in love with her circa "Pride and Prejudice." Knightley's performance here veers gracefully from the charming to the devastating: One minute she's giggling as she plays cards with her cherubic little offspring; the next, she's crestfallen when she realizes that her husband is determined to choke off all her life's happiness. (Fiennes' performance here is wholly without vanity: He holds nothing back in playing a loathsome, stubborn character, though he still manages to let glimmers of humanity peek through.) Everything Knightley does rings true and clear -- she defines the character of Georgiana in a way that's not anachronistic, nor modern in a forced way, but timeless. That's a lot to ask of a young actress, but Knightley is up to the task. Her Georgiana is history with a human face.