Ricky Gervais shows off his killer comedic instincts as a dentist who sees dead people in this heavenly romantic comedy. 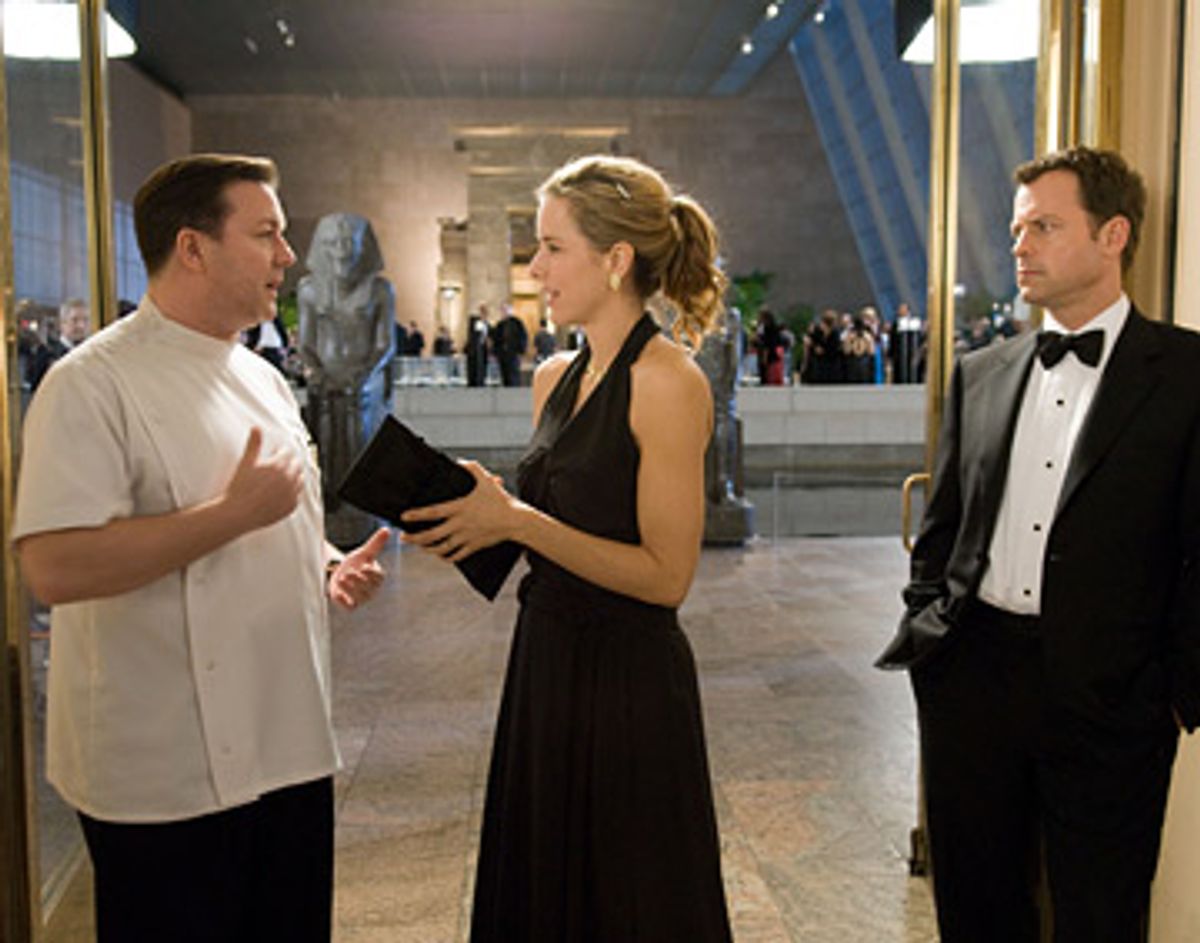 There's no kissing in "Ghost Town," which is almost unheard of in a contemporary romantic comedy. The lip-lock is usually the deal-sealer, the proof and the payoff, the easy shorthand way of showing that two characters have made a connection. But maybe the director and co-writer of "Ghost Town," David Koepp, is interested in other kinds of connections -- or maybe in the way sometimes, when the world around you seems so big that you fear you're in danger of being erased, just making contact with another human being can feel like heaven.

Or hell -- but Koepp allows for that contingency, too. "Ghost Town" is a rarity, a contemporary romantic comedy that honors the traditions of the genre without checking them off some plasticized list. The picture is breathing, and alive, every minute. The fact that it stars three superb comic actors -- Ricky Gervais, Tèa Leoni and Greg Kinnear -- doesn't hurt. If you need a big star to open a movie, Ricky Gervais, of the British TV series "The Office" and "Extras," sure isn't it. But his sense of timing is a marvel -- its delicate, off-center quality may work even better on the big screen than on the small one -- and even his vague unsuitability as a leading man (that squarish, scrubbed-clean face, that barrel-shaped chest) ultimately works in his favor. By the end of the movie, you can't imagine anyone else in the part.

Gervais plays Bertram Pincus DDS, a misanthropic dentist who loves his job chiefly because most of the people he deals with all day have their mouths stuffed with cotton -- he doesn't have to listen to their loathsome yammering. One day, after undergoing a minor if rather delicate surgical procedure, he realizes that he can see dead people: They're roaming around the streets of New York in droves, often dressed in anachronistic outfits, looking for ways to resolve their unfinished business. One of these specters is Frank Herlihy (Kinnear), a philandering husband who met a sudden and undignified end and is now doomed to wander until he works out some unresolved issues with his widow, Gwen (Leoni). The problem is, Frank doesn't know exactly what those issues are. But since Pincus is the only living, breathing human being who knows Frank exists (in whatever form), Frank clings to him, popping up at inconvenient moments, trying to cajole his cranky new friend to help him secure Gwen's happiness.

It turns out Gwen and Pincus have already met: They live in the same building, and Pincus has made a point of not holding the elevator for her, or of swooping in to steal the cab she's hailed on a rainy day. That's the kind of guy he is, but not the kind of guy he's meant to be. "Ghost Town," which Koepp co-wrote with John Kamps, is, among other things, a comedy of transformation, and there are places where the picture veers dangerously close to sentimentality, most notably as Pincus rounds the bend on his Scrooge-like revelation. But Koepp has enough control over the enterprise, and enough prickly affection for his often imperfect characters, that he always manages to wrest the picture back on course.

This is a movie where we're set up to dislike certain characters, only to find that such churlishness is impossible, and where two romantic leads find their chemistry not in making dewy love-eyes at each other, but in recognizing that their wig-waggy rhythms are completely in sync. It's also a movie where pure romantic happiness, forever and ever, is not guaranteed: Maybe Gwen and Pincus won't be able to live without each other, but that doesn't necessarily mean they can live with each other, either.

But that's the crapshoot of the romantic-comedy universe, and "Ghost Town," following in the seemingly forgotten steps of Preston Sturges, never loses sight of it. Koepp is probably best known as a screenwriter -- he's worked frequently with Steven Spielberg and Brian De Palma, on pictures like "War of the Worlds" and "Carlito's Way" -- but his directing credits include a poetic little supernatural thriller called "Stir of Echoes," the kind of picture that proves a filmmaker knows how to do a lot with a little.

"Ghost Town" is similarly well-crafted. Call me old-fashioned, but I like a movie that looks like it cost more than 29 cents to make (even -- especially -- if its actual budget was 28 cents), a picture that suggests someone put time and care into its planning and execution, instead of just turning a hand-held camera on the actors after supplying them with a hastily typed-up script peppered with pop-culture references. That's not to say there aren't filmmakers out there capable of doing interesting things within tiny budgets (and Lord knows those filmmakers exist in other countries, too, making movies that most of us never get to see). But mainstream movies have gotten so big, glossy and empty in recent years that we often assume indie pictures are better just because they're somehow less shiny, and that's a fallacy. You can't blame intelligent audiences for turning away from mainstream romantic comedies in recent years. But self-conscious, rambling exercises like Alex Holdridge's recent indier-than-thou romantic comedy "In Search of a Midnight Kiss" aren't an antidote to true Hollywood stinkers like "Over Her Dead Body." They only offer further proof that it takes focus and discipline to make a romantic comedy work. And while it's true that Judd Apatow has given the genre a shot in the arm in recent years, even vivid, vital pictures like "The 40-Year-Old Virgin" and "Knocked Up" are not exactly elegant.

"Ghost Town," on the other hand, finally brings some class to the joint. Shot in New York, the picture has a feel for what it's like to live in the city: Instead of making Central Park look like a tourist destination, cinematographer Fred Murphy shows us a sturdy landscape of paths and trees that people use and enjoy every day. The movie's greatest pleasures unfold in the form of little details, like the way the Beatles' "I'm Looking Through You" pops up on the soundtrack when Frank discovers that he's no longer flesh and blood but ectoplasm. The joke is quite literal, but it's also a gentle metaphor for the way we can't always fully know even the people we love best.

The actors are in tune with those details, and attuned to each other. Kinnear is one smart-alecky ghost -- he wanders through the movie in the clothes he was wearing when he died, a lady-killer tuxedo that fits his lithe frame perfectly -- and he often teeters on the brink of unlikability. But as in most of Kinnear's best performances, that's part of the design: He's that much more affecting when he finally drops the mask and we see the raw feelings beneath.

And Leoni and Gervais are wonderful together, as much for the ways in which they wobble against each other as for the ways they ultimately mesh. Gervais' Pincus enters the movie like a square peg in a round hole, an unendearing misfit: He growls at the sweet-natured colleague (played by Aasif Mandvi) who tries to show him some new-baby pictures; when he goes to the hospital for his "procedure," he's not amused by his surgeon's running patter about how she just got spray-tanned. (That surgeon is played by nutball genius Kristen Wiig, who might have stolen the movie if it were at all stealable.)

But as Pincus gets into the groove of being with other people -- particularly Gwen, whom he's falling hard for -- we can see that there's a sterling underside to his idiosyncrasies. (It doesn't hurt that there's something of Jackie Gleason's physical grace and agility about Gervais, even though he's not nearly as portly.) Leoni, always a superb comic actress, meets Gervais' challenges admirably, and then ups the ante. In her first few scenes with him, she's called upon to react, wordlessly, to his clumsily uncharitable remarks and his weird dentist humor. But she's not just a laugh track for him: I watched her closely, and every gag got a different response, in the form of a slightly more arched eyebrow or a barely suppressed snicker.

Even though good performers make a director's work easier, I don't want to think about what it must be like to work with actors like these, capable of breaking comic beats down into fractions of milliseconds. It's probably a lot like being a tiger wrangler, but at least with tigers, you're dealing with something you can see. Here, Koepp is wrangling rhythms, and his ability to keep the proceedings humming is part of the indescribable something that makes the movie work. Maybe that's why there's no kissing in "Ghost Town": There's no time and no room for the easy romantic fix. The point is to only connect. And that's hard enough.