We are all radical regulators, now 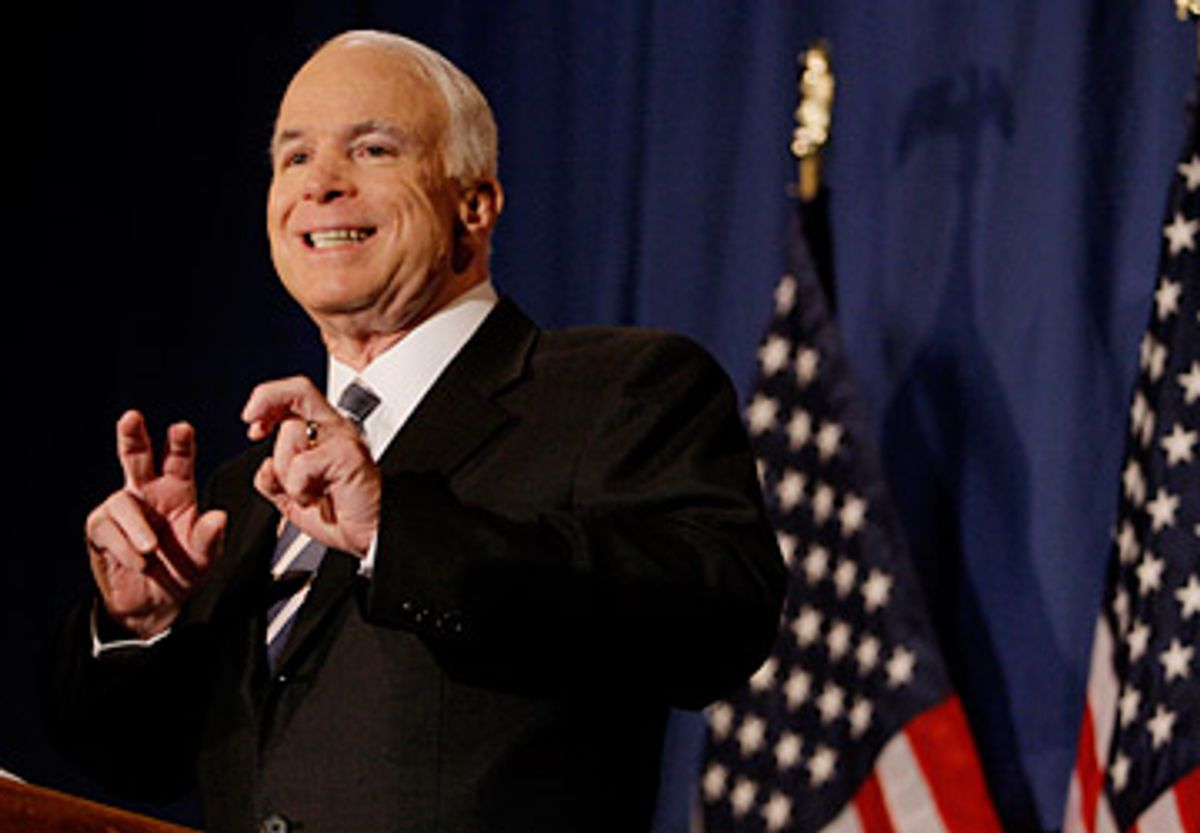 Nothing could better prove the adage that in a recession, we are all Keynesians, than the parade of politicians and government regulators who spoke out Friday in favor of radical government intervention in the economy. But who would ever have imagined that the most extreme proposal for government intrusiveness in the private sector would come from John McCain?

Starting from the top down:

We must act now to protect our nation's economic health from serious risk...

Our system of free enterprise rests on the conviction that the federal government should interfere in the marketplace only when necessary. Given the precarious state of today's financial markets, and their vital importance to the daily lives of the American people, government intervention is not only warranted, it is essential.

We must now take further, decisive action to fundamentally and comprehensively address the root cause of our financial system's stresses...

The ultimate taxpayer protection will be the stability this troubled asset relief program provides to our financial system, even as it will involve a significant investment of taxpayer dollars. I am convinced that this bold approach will cost American families far less than the alternative -- a continuing series of financial institution failures and frozen credit markets unable to fund economic expansion.

Our government and the Federal Reserve have already taken unprecedented action to prevent a deepening of this crisis that could jeopardize the life savings and well-beings of millions of Americans. But it's now clear that even bolder and more decisive action is necessary.

John McCain, however, did not make any direct references to the government's bailout plan in his speech today, nor did he even whisper the names "Bush" or "Paulson." But while Republicans were piously calling out for bipartisan unity and Obama made a strategic decision to take a break from his weeklong hammering of McCain, the Republican presidential candidate launched a blistering attack on Obama for his slender connections to former Fannie/Freddie execs Franklin Raines and Jim Johnson, and then, remarkably, proposed what looks to me to be the most extreme regulatory proposal I've yet seen suggested to deal with the current crisis. Read along with me, and tell me what you think.

First, to deal with the immediate crisis, I will lead in the creation of the Mortgage and Financial Institutions trust -- the MFI. The underlying principle of the MFI or any approach considered by Congress should be to keep people in their homes and safe guard the life savings of all Americans by protecting our financial system and capital markets. This trust will work with the private sector and regulators to identify institutions that are weak and fix them before they become insolvent. The MFI is an early intervention program to help financial institutions avoid bankruptcy, expensive bailouts and damage to their customers. This will get the Treasury and other financial regulatory authorities in a proactive position instead of reacting in a crisis mode to one situation after another

Let's get this straight -- the man who says he is fundamentally a deregulator and that government should get out of the way of the private sector is proposing an "early intervention" system in which the government will be watching the books of all major financial institutions so as to steer them away from potential insolvency?! On the basis of this one paragraph alone, John McCain needs to renounce his membership in the Republican Party. I give up: He is a maverick -- he's more radical than FDR!

McCain also delivered one of the most ridiculous critiques of Wall Street I've heard so far this silly season: "Many in the financial services industry also either forgot or neglected their duty to act ethically and honorably."

The bedrock of the conservative belief in free markets is that independent actors pursuing their own economic self-interest create economic prosperity for us all. Honor and ethics have nothing to do with it. Greed is a feature, not a bug.