A pediatrician traces the rise of the anti-vaccine movement that falsely linked thimerosal with autism and turned parents away from the most lifesaving medicine in history. 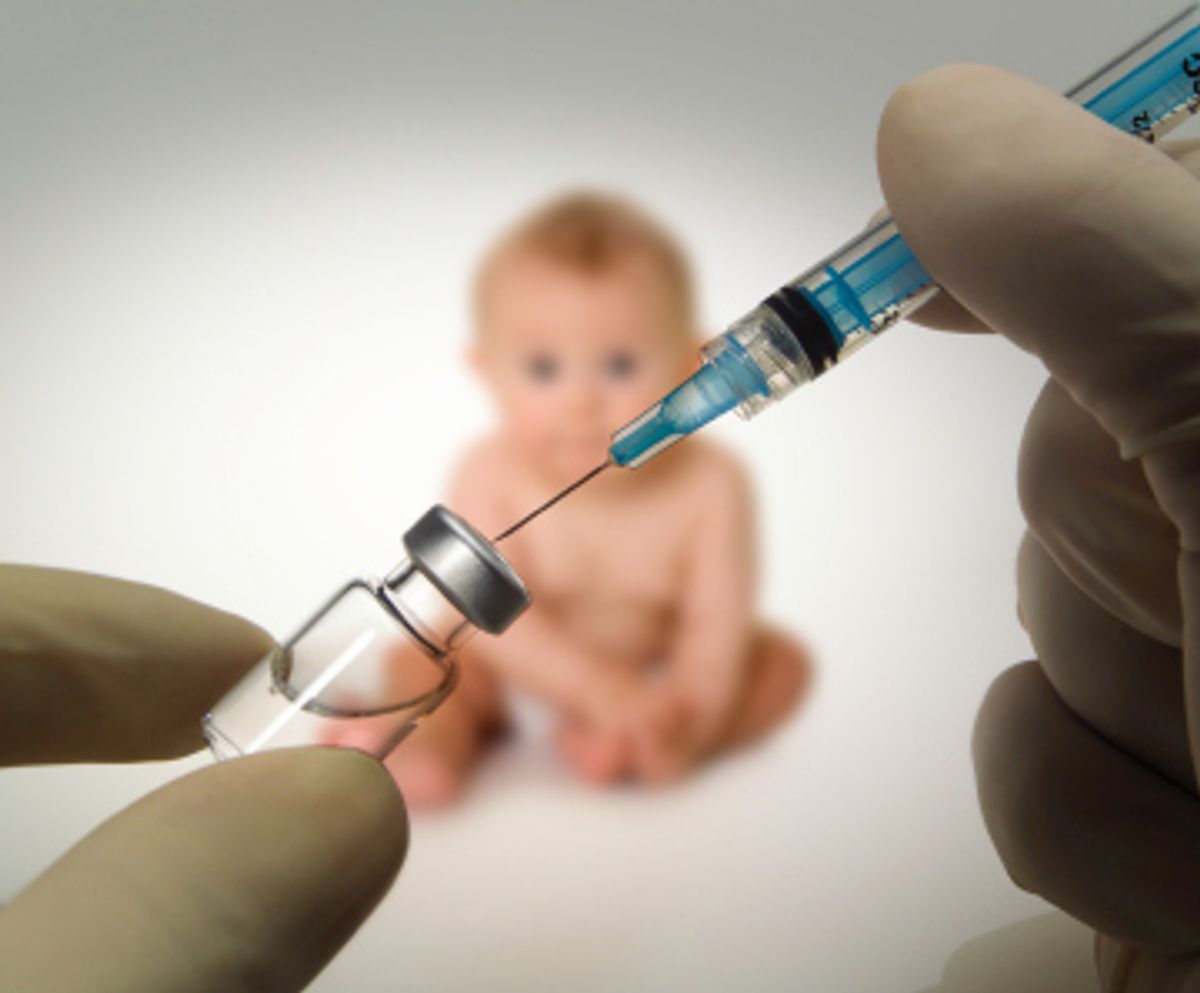 Early in Dr. Paul A. Offit's new book, "Autism's False Prophets: Bad Science, Risky Medicine, and the Search for a Cure," he describes a threatening letter he received from a man in Seattle. "I will hang you by you neck until you are dead!" it read. The FBI deemed the threat credible, assigning Offit a protective officer who, for the next few months, followed him "to and from lunch, a gun hanging at his side." He then recalls a suspicious phone call from a man who recited the names of Offit's two children and where they went to school: "His implication was clear. He knew where my children went to school. Then he hung up." These days, the hospital he works in regularly screens his mail for suspicious packages.

Such stories usually come from pro-choice physicians on the front lines of the abortion debate. But Offit is no obstetrician. Rather, he is a baby doctor -- the chief of pediatric infectious diseases at the Children's Hospital of Philadelphia. The threats against him and his family have come not from antiabortion advocates, but rather from anti-vaccine crusaders who believe that vaccines cause autism. Offit, it turns out, has been targeted by them because he helped to develop a vaccine that prevents rotavirus, a serious gastrointestinal infection in children, and because he has been staunchly pro-vaccine in a time when there are many doubts about their safety.

His book investigates the anti-vaccine movement and is a tough rebuttal against his critics, who call him "For Profit Offit" because he worked with drug companies to develop the rotavirus vaccine. Nevertheless, the book is an examination of science and society that's enlightening, highly readable and -- given the recent news about the resurgence of vaccine-preventable diseases as a result of parents' refusal to vaccinate their children -- timely.

Offit begins by tracing the history of the anti-vaccine movement to its roots in England in 1998: That's where a young, charismatic and ambitious researcher named Andrew Wakefield held a news conference to reveal he had discovered that the measles-mumps-rubella (MMR) vaccine causes autism. The prestigious medical journal Lancet subsequently published his paper. Soon, headlines warning parents about "child jabs" appeared on the front page of newspapers all over the U.K., and droves of parents began refusing the MMR vaccine. Despite the resurgence of measles in the U.K. as a result, Wakefield was hailed as a muckraker. The BBC even made a biopic about his fight against the establishment.

In 2000, the news crossed the pond. Indiana Rep. Dan Burton, himself the grandfather of an autistic child, worried she had been injured by vaccines, and held a congressional hearing to publicize Wakefield's findings. Several scientists in the American medical community testified that they, too, had research showing that something in the MMR was suspicious. Just as in England, the media here swarmed. Among the resulting press were Robert F. Kennedy Jr.'s "Deadly Immunity," published simultaneously in Rolling Stone and Salon, and David Kirby's blockbuster book, "Evidence of Harm," a damning account of the link between autism and vaccines and of our government's efforts to cover up a link between the two.

Kirby focused on the notion that thimerosal, a mercury-based compound used to protect vaccines from contamination, is causing an epidemic of autism. This despite the fact that thimerosal was removed from vaccines in 2001, even though it had been used for decades and no studies had been done to verify there was a danger. (Not unexpectedly, this decision, made abruptly by leaders in the medical community, raised even more suspicion about vaccines and autism). Kirby's book became the centerpiece of the anti-vaccine movement and brought him fame. He started speaking widely on the subject, earning appearances on programs as well regarded as "Meet the Press." He even began talks to turn his book into a movie by the same company that made "An Inconvenient Truth." In describing all of these factors -- shocking medical research, media publicity, political endorsements and conspiracy theory -- Offit shows us how vaccines, the most significant and lifesaving medical therapy in history, fell from grace.

But it's at this point, about a third of the way into his book, that Offit begins deconstructing the anti-vaccine movement as one driven by bad science, litigious greed, hype and ego. As early as the 2000 House hearings, scientists expressed unease about Wakefield's methods, worries that Rep. Burton and the media dismissed. But it wasn't until 2004 that Brian Deer, an investigative reporter for London's Sunday Times, discovered damaging evidence against him. Despite what Wakefield claimed in his paper, his hospital's ethics committee never approved his experiments to put children to sleep under general anesthesia, do spinal taps on them, take biopsies of their intestines (one of the children was hospitalized after his colon perforated in several places) and take volumes of blood from their veins. Deer also discovered serious conflicts of interest: Wakefield's research was secretly bankrolled by a personal injury lawyer whose clients were suing MMR makers. Wakefield himself was given close to a million dollars to prove that the MMR caused autism. He had filed a patent for a new MMR vaccine at the same time he was doing his research. Upon learning this, Lancet retracted his paper, and he was charged with professional misconduct in 2005. If he is found guilty of misconduct, he will never practice medicine in the U.K. again.

The last nail in the coffin came in 2007 during an "autism omnibus proceeding" in the United States. (This is a federal hearing for several thousand parents who claim their children developed autism because of vaccines. Those parents are seeking compensation from the federal government.) Wakefield's former research assistant testified that his discovery about the MMR vaccine was, in reality, the result of contaminated lab equipment and that Wakefield knew this about but ignored it. In other words, as Offit writes, "Wakefield had crossed the line from ill-conceived, poorly performed science to fraud."

Most of Offit's book takes readers through the public, political, legal and medical battle over vaccines. But he also takes them inside the autism community's own battles over them. Offit interviews Katherine Seidel, the mother of an autistic child who has published her own investigations of those who have profited from the vaccine-autism theory on her Web site, neurodiversity.com. Like many in the autism community, Seidel feels that the focus on vaccines has been a distraction, and that the only people who have benefited are those who sell "cures" to desperate parents, treatments lacking evidence of either safety or effectiveness. She describes the father-and-son team of Mark and David Geier, one a doctor and the other with a college degree in biology. The elder, Mark, opened a homemade lab in his basement, where, under the patronage of anti-vaccine advocates, he works on his theories. They include prescribing Lupron to autistic children, a drug that several states use to chemically castrate sex offenders. The son, David, runs a medical-legal consulting firm, where he offers up expert witnesses for vaccine-injury trials. The two work hand in hand to make money both selling treatments and testifying as expert witnesses in vaccine-autism cases.

Offit also uses the vaccine-autism debate as a case study in how easily society misconstrues science. We are all too eager, he believes, to hold up a single, unverified scientific study as fact. Instead, we should be skeptical about its conclusions and measured in our response to it until its results can be verified by future studies. He highlights many factual errors in articles by Kennedy and others. (Rolling Stone issued retractions in three separate issues; Salon issued five separate corrections of his piece.) But it is David Kirby against whom Offit levels some of his strongest criticism. Unlike other reporters who changed their views after newer research exonerated vaccines, Kirby has refused to budge. This even after he said, "If the number of three-to-five-year-olds [with autism] has not declined by 2007 ... that would be a severe blow to the autism-thimerosal hypothesis." (A 2008 article showed, in fact, that autism rates have continued to climb in the post-thimerosal era.) Offit describes how bizarre Kirby's thinking has become when, while speaking in 2006, he claimed that autism rates were increasing because of China's use of coal (he used a slide with the phrase "Mongolian Plume" written on it), the forest fires in California and an increase in cremations, which release mercury from dental fillings into the air. In the meantime, his movie deal is off. These days, he blogs for the anti-vaccine group Age of Autism, occasionally exporting his entries to the Huffington Post.

One thing that Offit perhaps could have done more in his book is to give autism advocacy groups greater credit for raising awareness, creating strong support networks for parents of children with the disorder and getting more money for research. While he focuses on those groups (like Defeat Autism Now! and Generation Rescue) that have been very confrontational and that support slanted science, there are many advocates (like Seidel) and groups (like Autism Speaks) that have been broader in their search for autism's causes and cure. It's for that reason that the National Institutes of Health is now funding autism research, centers like the M.I.N.D. Institute at the University of California at Davis have been created, and organizations like the American Academy of Pediatrics have published more specific guidelines for doctors regarding the diagnosis and management of autism. Nobody on either side of this argument will dispute this kind of success.

Offit effectively pulls back the curtain on the anti-vaccine movement to reveal a crusade grounded less in fact and more in greed and opportunism, as the book's title subtly but aptly suggests. For that reason, it is sure to inflame anti-vaccine crusaders. But this isn't a book written for them. Rather, it speaks to parents and others who are unclear, unsure or concerned about taking their children to see their pediatrician, and it offers them reassurance about vaccines and the doctors who give them.