From Minnesota to Mount Rushmore, the coffee shops and bars are buzzing with talk of whether the moose-hunting mom is fit to be vice president. 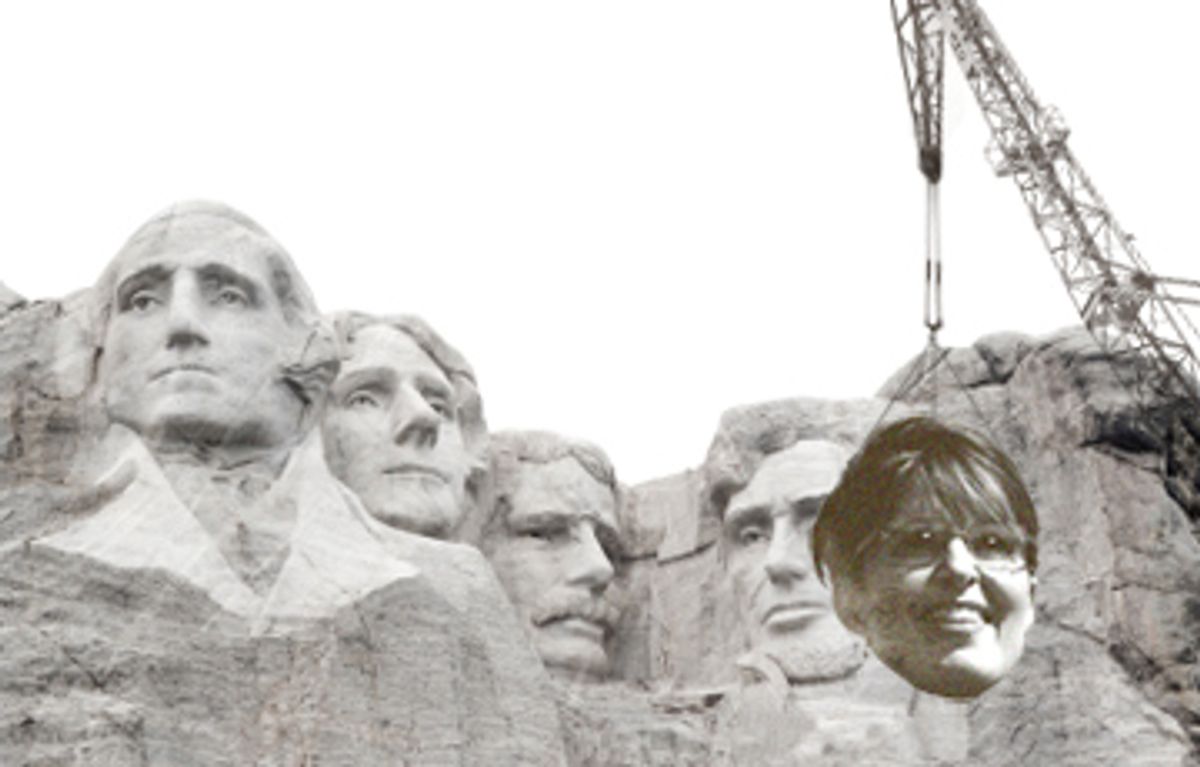 There can be no doubt that the addition of Sarah Palin to the Republican ticket dramatically altered the presidential race, inspiring a once wary conservative evangelical base to get behind John McCain, and giving new momentum to his campaign. But how is Palin playing in towns across the American heartland?

In the weeks since the Republicans held their national convention, small-town coffee shops, laundromats and bars have been buzzing with talk about the "pitbull with lipstick" and her sudden rise to national prominence. In dozens of interviews across battleground states in the Midwest and Mountain West, where I've been traveling the last couple of weeks, voters' reactions to Palin were at times surprising. There were plenty of predictable responses: From Palin devotees, "She's got the balls and the moxie," and from across the divide, "She's less qualified than Spiro Agnew."

But toward the center of the continuum, where most expect this tight presidential race to be won or lost, views of Palin were more complicated. Women identified with the no-nonsense "sports mom" but were turned off by her hard-line views on abortion. Some voters found her far more exciting than either McCain or Barack Obama, but said she was wrong about gay marriage. Some said they ultimately couldn't go for a candidate so ignorant about foreign policy. Some thought she was just plain "hot."

Although much has been made of Palin's appeal to social conservatives, she has also excited many socially moderate swing voters who have been turned off by Obama, but also are unimpressed with McCain. Many voters seemed to define Palin exactly as the GOP has hoped -- a "mom, moose-hunter, maverick," as depicted in her video biography played at the convention.

Clearly, the Alaska governor's charisma and highly glossed image have made a splash. At the laundromat in Luverne, Minn., Gerald Hayman, 48, who used to work for a company that picks up and disposes of dead farm animals, but is currently unemployed, shared his opinions while folding his clothes. Hayman doesn't like McCain's talk of an open-ended commitment in Iraq, and fondly remembers the way "Bill Clinton brought the economy up," so he'd been leaning toward punching the Democratic ticket. But Palin has made him rethink that choice. "She don't mind stepping on people's toes, and maybe Washington needs that," Hayman said. He added, "And she's got a pretty nice pair of legs on her."

At the Powder River Stockman's Club in Broadus, Mont., a town of 451 people with no less than three taxidermists, S. Samuelson, 55, a second-generation rancher, tips his cowboy hat, nods and says: "She's hot." Between tales of breaking horses and negotiating the sale of calves, Samuelson admitted that he was very impressed by Palin, and said he even wished that she was running for president instead of McCain, whom he doesn't like. Exuding the "live and let live" philosophy common in Big Sky Country, he didn't share Palin's zeal against abortion and gay marriage -- "I don't care what they do" -- but he saw Palin as "kind of a fighter, who ain't scared to shake stuff up." That will probably win his vote, Samuelson said.

But at Stroker's Tavern in Huntley, Mont., John Cook, a Republican, saw it differently. "Palin is great for Alaska -- I'm enamored with her," said Cook, 58, who is a carpenter. "But being governor of Alaska, a rural state like Montana, it's still small-town politics. It doesn't prepare you for national politics. There are 20 cities in this country that have more people than Alaska!"

Near Keystone, S.D., the base of Mount Rushmore National Monument was an apt place to gauge the power of Palin mania. One way or the other, the November election will put a definitive crack in the white male monolith of the American presidency, as seen in the four 60-foot faces towering above. Here, Americans from all over pull up in their cars, trucks and R.V.s, and, not least because of gas prices, there was no shortage of opinions about the fraught presidential race.

"She'll put a match under McCain's butt!" huffed Gertrude Burke, 84, of Winslow, Mo. Her daughter Mary Burke, 62, shared her excitement, voicing common admiration of Palin as "down-to-earth, a mother, an outdoors woman ... and very well educated." At this her husband, Ken Burke, 64, piped in half-jokingly: "She has to be well educated, she's been to five different colleges!" Although Mary Burke is pro-choice, since the introduction of Palin she said she is now leaning toward the Republican ticket.

Some former supporters of Hillary Clinton expressed excitement about Palin -- but gender was secondary. To them, she seems a fresher, more maverick, more populist agent of change now than Obama (who has endured media scrutiny, including revelations and rumors about his past, for more than a year and a half). Although some don't share Palin's far-right positions on social issues, or weren't fully aware of them, they were willing to overlook that.

Charles Kempf, 65, a retired maintainence worker, and Judy Kempf, 61, a retired office manager, are both lifelong Democrats from Mesquite, Nev. They said Palin's "eloquent, intelligent and down-to-earth" way of speaking reminded them of Bill Clinton. Former Hillary Clinton supporters, they strongly dislike Obama and said they were resigned to not voting at all this year. But now they might vote Republican for the first time: "[Palin] kinda relates to us commonfolk ... she's got a family, she's got problems," as opposed to Obama, who "just talks above and is nothing but a script reader." They don't like Palin's strong pro-life stance, Charles Kempf said, but "you're not going to agree with everything, so you've got to overlook a few things."

Norla S., 62, a hospital administrator from Mankato, Minn, also a Hillary Clinton supporter in the primaries, is currently undecided. "I was so upset that Hillary worked so hard to get there, and then Palin comes in and whoop to the top," she said. She pondered this for a moment. "But if not [Palin], it's just the old-boys network again." Palin's small-town credentials appeal to Norla, although she has questions about Palin's experience. "But what the heck? A lot of people didn't have experience before they got in, and she's got a lot of good common sense."

But other voters, though taken by Palin's personality, appear less comfortable with her social politics, even in conservative regions such as northwestern Iowa. In the town of Le Mars -- the "ice cream capital of the world" whose population of roughly 9,000 was 97 percent white as of the 2000 census -- Cathy, 56, a swing voter who had backed Hillary Clinton, admitted that Sarah Palin excites her. Between sips of soup at the Bellissimo Coffee Works, Cathy spoke of how, as a small-town mom, she identifies with Palin. But Palin's hard-line social views are a turnoff. "I really don't care about the gay marriage issue," she said. "I've known gay people all my life."

Many younger voters expressed similar feelings about being put off by Palin. At Mount Rushmore, Republican voter Neal G., 23, currently an engineering and economics student at Ohio State University in Columbus, said he is "100 percent for gay marriage." Taken together with Palin's seeming "uninformed on a lot of issues," he said that he is now reluctant to vote for his party's ticket.

Some see the selection of Palin as a cynical move by McCain to court segments of the electorate in which his support was sagging. They think it will backfire.

"I respected him before, but Sen. McCain will do anything to get elected," said Maureen K., 68, a university administrator from Pittsburgh. "And now with Palin, it's like 'American Idol' replayed." Her husband, Ralph, 68, a computer programmer, and a Republican, reluctantly agreed. "As much as I hate it," he said, "I gotta vote for the Democrats." Carl B., 35, a naval officer also from Pittsburgh, said that "people find it insulting that they would pick Palin to pick up female votes." He said he will stick with his convictions and vote in November for libertarian candidate Bob Barr.

Palin's view of the world beyond Alaska has not gone unnoticed. Even some of those eager to see a woman in power are unimpressed. "When she was talking about foreign policy experience and said, 'I can see Russia from my backyard' -- Ding! Ding! -- that was enough for me," explained Pam Mueller, 64, of Grand Rapids, Mich., a former Hillary Clinton supporter. Mueller said she will stick with her party and vote for Obama. Gray Mayo, 70, from Northglenn, Colo., put it bluntly: "She should stay a sports mom. She's no Hillary."

With the meltdown on Wall Street and the economy weighing more than ever on the minds of Americans, how Palin fits into that picture remains murky. Jim Fitzsimmons, a swing voter from Denver, is struggling to pay the bills for his young family of five solely on his income in a retail job. But he's skeptical as to how much a president can change the economy. He said he's found Obama's campaign to be long on "grandiose talk of saving the world" and short on "the x, y, z of what he's going to do." He and his wife, Therese, said they believe that McCain and Palin stand for reform, and they're leaning toward voting for them. "McCain is part of that old boys network," said Therese, "but Palin is the counterbalance."

The economy deeply concerns Terri Christensen, 38, of Iowa, who owns a machine shop with her husband but also helps out at her parents' restaurant, the B&L cafe, in Rock Rapids, where Rudy Giuliani, Mitt Romney and John Edwards stumped during the primary races in January. "Our small machine shop has been tortured by the economy, but it's not important enough for the government to bail us out," said Christensen. Although she is leaning toward the Republican ticket, the pick of Palin surprised her, as such an unknown. "I just want someone who can actually get something done," said Christensen.

Joe Medley, 70, a retired teamster truck driver, identifies with Palin's husband Todd's working-class credentials as a union man and avid dog sledder. Medley has never voted Republican, but said he strongly dislikes Obama and has been excited enough by Palin to consider crossing party lines. With the economy sinking, he might have to come out of retirement, but he doesn't believe either party can do much to bail out America right now. "The Democrats have always done more for the working man," Medley said, "but I think we're so far in debt, it doesn't matter which person you put in there."

That mood may point to the ultimate test for the Palin pick in the six weeks ahead: Can the excitement she's generated help carry McCain through to victory, despite an economy tanking under a Republican administration? Although unfriendly stories about Palin's past continue to bubble up in the media, none seem to be sticking much with voters. If anything, they've endeared her more to some, who see her as a small-town mom getting beat up by a bloodthirsty press corps. If she can run the media gantlet relatively unscathed -- and if Obama and the Democrats fail to persuade voters they can turn the economy around -- Sarah Palin may make history not only as America's first female vice president, but as an unlikely and unusually influential candidate.