The McCains should spend every day with Rachael Ray!

The Republican candidate and his wife enjoy a very, very, very comfortable half-hour with the daytime talk show host. 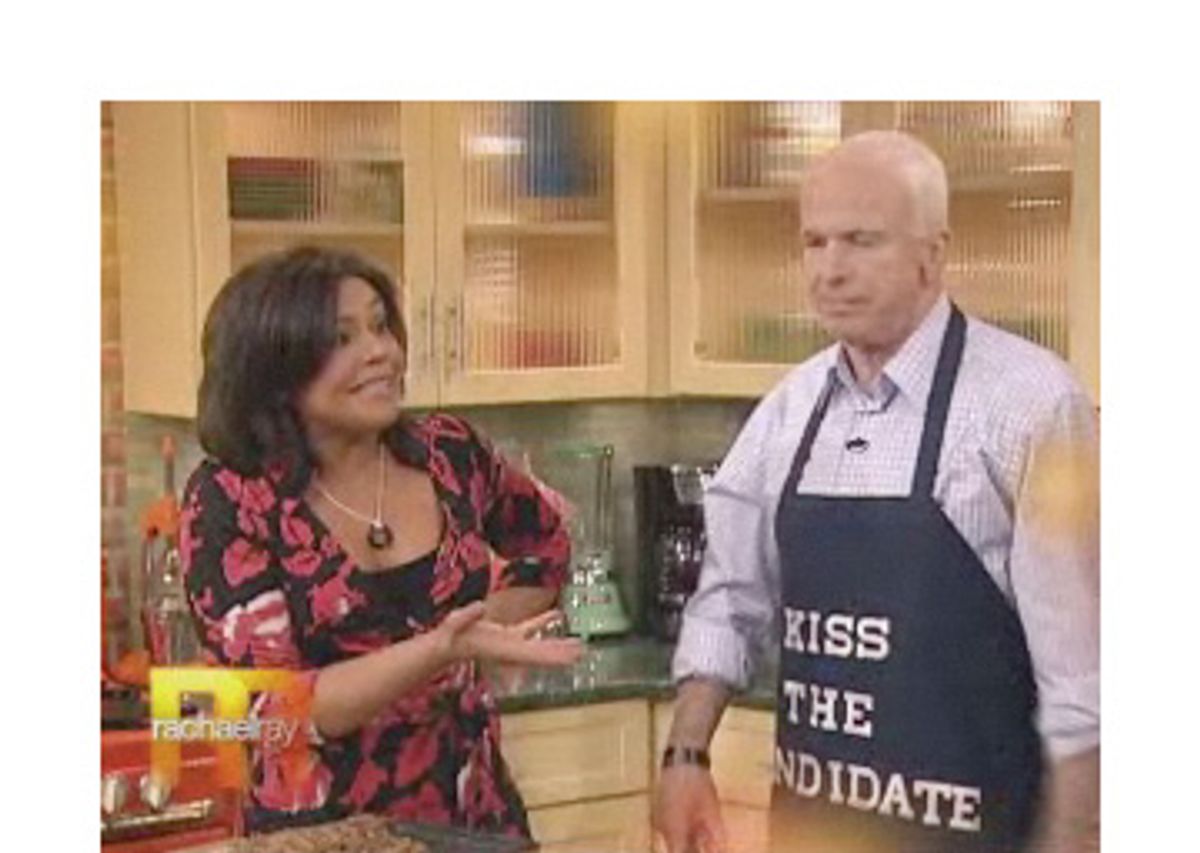 Screen shot from the "The Rachael Ray Show"

It seems like just over a week ago that everyone was (rightly) celebrating the penetrating news instincts of those women on "The View," who recently invited John McCain to their show for a nice little chat and then clobbered him over the head with questions about reproductive rights, secularism, the kinds of judges he'd appoint to the Supreme Court and how he chose a running mate with no experience.

Well I'm sad to report that a penchant for unexpectedly hard-hitting journalism is not contagious on the daytime talk show circuit, as evidenced by this morning's episode of "The Rachael Ray Show," on which the 30-minute-meal, folksy lifestyle guru invited John McCain to her show for a nice little chat and clobbered him over the head with puppies, kittens and ice-cream cones. Seriously, Ray's half-hour interaction with McCain and his wife, Cindy, was so comfortable, so gentle, so fluffy, so sponsored by the Republican Party's major talking points that my eyeballs are still bleeding. (Some video available on Ray's Web site ... if you dare!)

The spectacle began when Ray welcomed the McCains, and then had them walk awkwardly down the audience aisle toward her, Cindy looking as though she would rather be just about anywhere else on earth. John Rich's country megahit "Raisin' McCain" played as they entered.

Ray kicked off her interview with a little homily, noting that whatever your politics, she's "so happy to be alive and an American in this election, because this election has made politics popular again! ... No matter what happens, this is a great, banner time for Americans."

Actually, no. It is not a great, banner time for Americans "no matter what happens." The United States is at war, the economy is in the toilet, many of our prized civil liberties have been stripped, the rest of the world hates us, we have faulty education and healthcare systems in place to care for our citizens. But whatever. I'm glad you're so happy to be alive and an American no matter what happens.

Ray's bipartisan back patting did give McCain the first of his many windows of opportunity, this time to invoke the name of the woman for whom he and his party have suddenly developed a deep and unlikely affection. Briefly gliding by his admiration of Barack Obama, McCain needlessly noted, "He had a very tough primary opponent in Senator Clinton, who I have great admiration and respect for" -- especially the parts about how she's pro-choice and for universal healthcare and ideologically opposed to you and your running mate in every conceivable way except for the fact that she and your running mate both have a pair of mams but don't let that stop you from making the direct and compelling segue -- "I'm so proud of my running mate. She's injected a lot of life into this campaign!" Here Cindy McCain nodded nervously, while looking in an unfocused manner, kind of at the camera but kind of not.

"And there's no better place to talk politics than standing around the grill!"

Here, everyone laughed. Then Ray observed that "another reason I'm so happy is that my life really couldn't have happened or unfolded the same way in any other place in the world." In other words, in any other place in the world, Ray could not have gone from being a waitress to a multimillionaire lifestyle mogul who sounds like Aunt Selma from "The Simpsons." So, she went on, "did either one of you ever picture being this close to the White House?" "Never," said John with an appealing smile. "I married a naval officer," said Cindy with a brittle smile. "I thought I was going to spend my married life in the Navy!" She laughed and laughed and then attempted to chew off her own hand. No, she didn't do that last part. But she looked like she wanted to.

McCain then executed a three-point turn of mildly out-of-touch ass kissing by telling Rachael Ray, "I hear young people tell me all the time about you being their role model." Eeek!

Ray's most pointed question was about whether there was a way that the future president might make good food more affordable for struggling families, which allowed the candidate the perfect opportunity to hit on his theme for the morning: That he is a regular, rib-grillin', populist guy. He launched into a spiel about how he will create new jobs for people, and how in this housing market meltdown, "we're giving these executives 20-, 30-, 40-million-dollar packages while their inside-the-beltway banditry has caused people to lose their homes!" For those keeping score at home, McCain has worked inside the beltway for more than two decades. Also, the $20, $30 or $40 million packages these executives are getting is a drop in the bucket compared with the beer-distributing fortune on which Cindy McCain sits.

Ray then lobbed Cindy a whiffle ball about whether she's happy to have Sarah Palin on her husband's ticket. Cindy replied, "I couldn't have been prouder of him. The fact that she's a woman is exciting to me, but also that she's the same kind of reformer as him." Cindy also had a chance to point out that she was "so thrilled" that her husband was the first Republican candidate to offer this chance to a woman.

McCain bizarrely seemed more interested in talking about the "first dude" and went on a long riff (possibly to remind the people he'd been assured were Ray's traditional daytime audience of how much dudes like dude things) about Todd Palin's four-time victory in the snow machine race.

Other killer Rachael Ray questions included: "What surprises you most about [Sarah Palin]? About her family?" (I desperately wanted him to answer "Well, I sure was surprised to hear that teenager was pregnant!" But alas, McCain disclosed that the big surprise was how 7-year-old Piper is "the best politician in the world" and Cindy talked about what "remarkable parents" the Palins are.) And this fast ball to Cindy: "Anything Americans might be surprised by [about your husband]?" ("He's a great cook and a lot of fun to be around when he cooks.") And, to John, "If you're in the White House, will you relandscape the backyard [for a grill]?" ("Yes, we will have a grill.")

"It is not a grill democracy in our house!" declared Cindy, sort of looking at the audience for "Sing it, sister" affirmation from the female crowd, while McCain went for their husbands with the queasy assertion, "I can certainly handle more than one grill!"

The McCains then told the familiar story of how Cindy brought home their adopted daughter from Bangladesh without telling her husband (Isn't that adorable! And ... sad?) and John plugged daughter Megan's blog.

Asked what his favorite New York eateries were, John mentioned the sandwiches at tourist favorite Carnegie Deli. To reiterate that he was clearly suspicious of those "cosmopolitan" tastes so prevalent in Rudy Giuliani's hometown, he noted that those big sandwiches show you "my level of gourmet sophistication."

"You have eaten your way across America -- literally!" said Ray, creating a momentarily amusing image of the McCains hoovering through Oklahoma. Any regional favorites?" John, of course, went with barbecue, while Cindy made note of a Philly cheese steak. When Ray asked her if she prefers them with provolone and onions, Cindy looked blank, and said that she just eats what's put in front of her.

"Do you guys ever get to watch TV?" was Ray's next zinger. "Or just go to a movie? Or just pop in a DVD?" This is where it began to seem as though Ray was not simply being sort of vapid and talk show host-y but actually teeing up RNC balls, allowing the McCains to sell themselves in precisely the way they wanted. "I liked 'The Tudors,'" said John. "I like 'Lost.' My hero is Jack Bauer of '24.' Though he always escapes, and I never escaped. That's a wonderful show. I like 'Lost,' I like 'The Office.' We like the normal kind of shows that are popular." The normal kind of shows that are popular. Like all you normal people out there who make shows popular. And who make presidents popular.

"Do you take any vitamins? Special supplements? Ginseng?" (Seriously, this was one of Ray's questions -- a nonsensical one, unless she was trying for some really mean age jab that involved Metamucil.) This allowed McCain to kvell about how the only energizer he needs is seeing the crowds of thousands who stand in the hot sun for hours just to see and support him.

After the break, the McCains came back and cooked up some of John's famous ribs, a recipe that involved salt, pepper and garlic salt, and that involved Cindy having to tie a "Kiss the Candidate" apron on her husband, to which he responded by offering his lips. She offered her cheek.

It also allowed Ray to exclaim and gulp audibly about where the McCains buy their ribs. Ready for this? You're totally not going to believe it!

Oh my God, presidential candidates are just like us! Even when they're wealthy four-term senators with heiress wives who could not only buy at Costco but buy Costco -- like the whole company!

He's John McCain, and he approved this talk show interview.