"When Will There Be Good News?"

Kidnapping, romance, comedy -- Kate Atkinson's delightfully inventive "When Will There Be Good News?" is much more than just another crime novel. 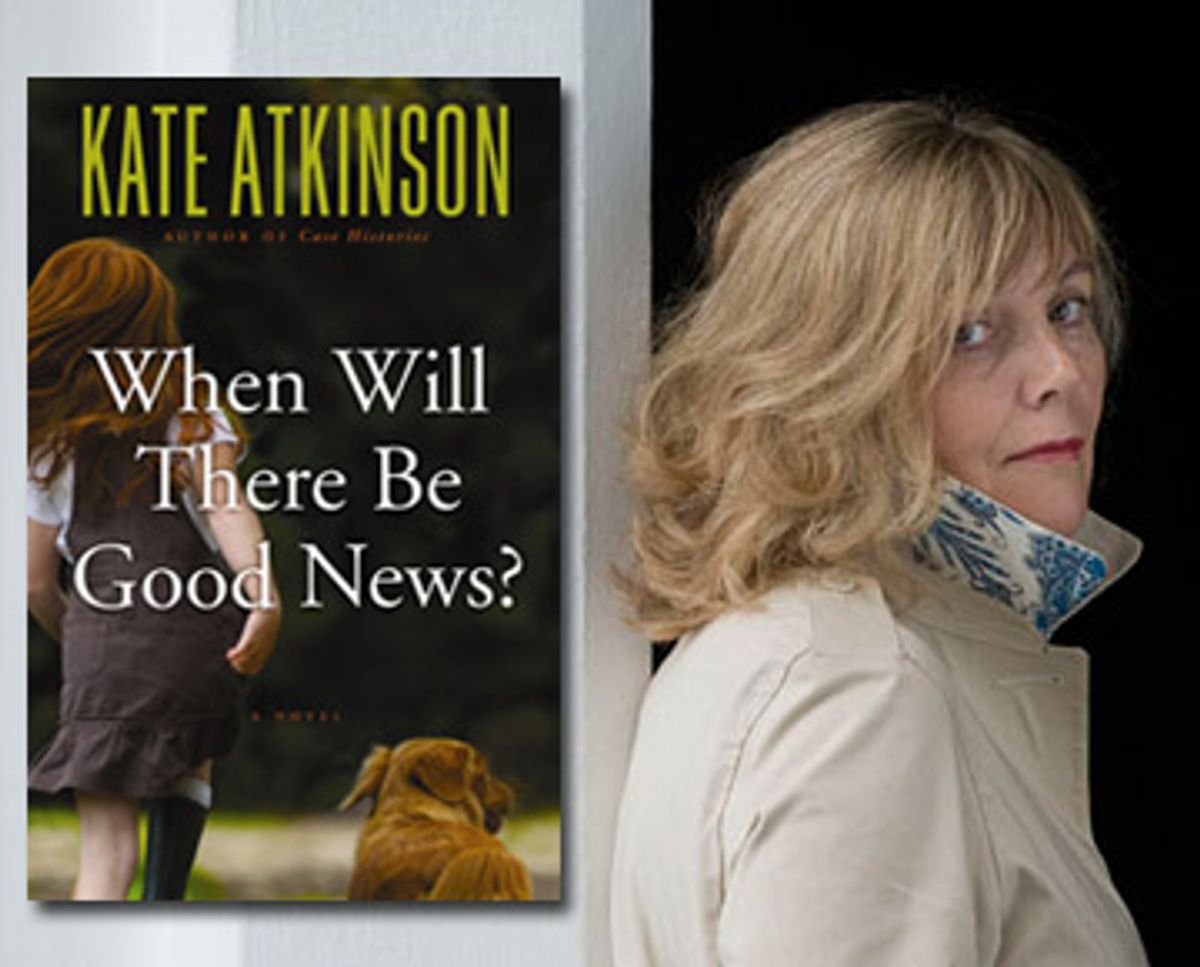 In real life, violent crime is a horror; in popular fiction it's the occasion for light entertainment. English novelist Kate Atkinson has been fruitfully exploring the chasm between the two for several years now, inventing new ways to write about murder and its aftermath in three books featuring the same protagonist, Jackson Brodie. The latest is "When Will There Be Good News?" and it is, like its two predecessors, a work of fancy, genre-bending footwork in which a rueful, cranky, modern comedy-of-manners dances an intricate minuet with an unlikely partner: a kidnapping plot. You don't need to have read the earlier two books to appreciate this one, but I can't think of any reason to deny yourself the delights of all three.

"When Will There Be Good News?" begins with an eruption of bloody and unfathomable brutality in the Devonshire countryside, then jumps forward 30 years, to contemporary Edinburgh. The perpetrator of the old crime has just been released from prison, the only surviving victim goes missing, and the night train from London derails on the outskirts of a scruffy working-class suburb. Brodie somehow becomes hopelessly tangled up in all of these catastrophes. A soldier turned policeman turned detective turned man of leisure, he is hangdog and lovelorn but nevertheless stalwart, and his talent for blundering into trouble is matched only by his handiness in getting out of it again.

Because his vexations are inevitably both personal and professional, Brodie couldn't find himself in Edinburgh (even by accident) without somehow getting embroiled in matters of keen interest to Louise Monroe. A hard-boiled, even surly police detective suffering from empty-nest syndrome, Louise was a minor character in Atkinson's last novel, "One Good Turn," and in the intervening years, we learn, she and Brodie have secretly pined for each other, even though they've recently managed to marry other people.

Atkinson's books aren't proper mysteries. She's forever taking her villains down a peg, portraying them as crude, shabby and stupid instead of as ingenious fiends or architects of vast conspiracies. Her detectives are dogged rather than brilliant. In this, she's more realistic than most crime writers; in her reliance on an outrageous amount of coincidence, she's less so. "When Will There Be Good News?" is full of red herrings and wild goose chases, too many by the conventional standards of mystery fiction, yet that would appear to be the point. A great, looping web of chance and intention connects all of the novel's characters, but as with any intricate piece of crochetwork, all of it is woven from a single strand.

The civilians in the story include the Hunters, a woman doctor and her louche entrepreneur husband, as well as their intrepid, sharp-eyed au pair, 16-year-old Reggie Chase, whom all the other characters persist in underestimating. Reggie is a less battle-scarred version of Louise, one of those people who struggle mightily to make the world run as it ought to, and who harbor a jaundiced view of all but a select few of their fellow human beings. Lonely Reggie worships Dr. Hunter, and having recently lost her own mother in a freak accident, longs to be invited all the way into the family. As for Mr. Hunter, Louise puts it best when she concludes, "Twenty years ago she too would have found his moodiness attractive. Now she just wanted to punch him."

Stinging unspoken retorts are a trademark of Atkinson's heroines, who, as a rule, see everything around them as going to hell in a handbasket. "A woman had told her that she was too young to wear make-up. Reggie would have liked to say, 'And you're too old to wear it,' but unlike, apparently, everyone else in the world, she kept her opinions to herself." Louise, making an atypical visit to a therapist -- "a hippy-ish well-intentioned woman called Jenny who looked as if she'd knitted herself" -- is instructed to visualize a pirate's chest into which she can stash all her "unhelpful" thoughts. "The problem was that when she had safely locked up all the negative thoughts at the bottom of the sea, there was nothing else left, no positive thoughts at all."

With their waspish dispositions and misanthropic attitudes, these women ought to be disagreeable, yet somehow they're not. They're too dependable, too witty and, more often than not, too right to quarrel with. And, fortunately for them, they have Jackson Brodie, who single-handedly redeems the male gender in their eyes. "If someone he loved was lost he would stalk the world forever looking for them," Brodie morosely observes of himself at one point. This is a key difference between Atkinson's novels and the usual run of crime fiction: her ability to wrench our attention away from the fascinating glamour of evil and redirect it toward that even rarer phenomenon, goodness, and the conditions that allow it to survive in a hostile world.

It's the victims and those who love them who shine in "When Will There Be Good News?" and in doing this the novel satisfies the question in its own title. The answer is: Right here and right now.

Books Must Read Mysteries Our Picks