Sarah Palin has a way of using "old boys" -- then dumping them when they become inconvenient. 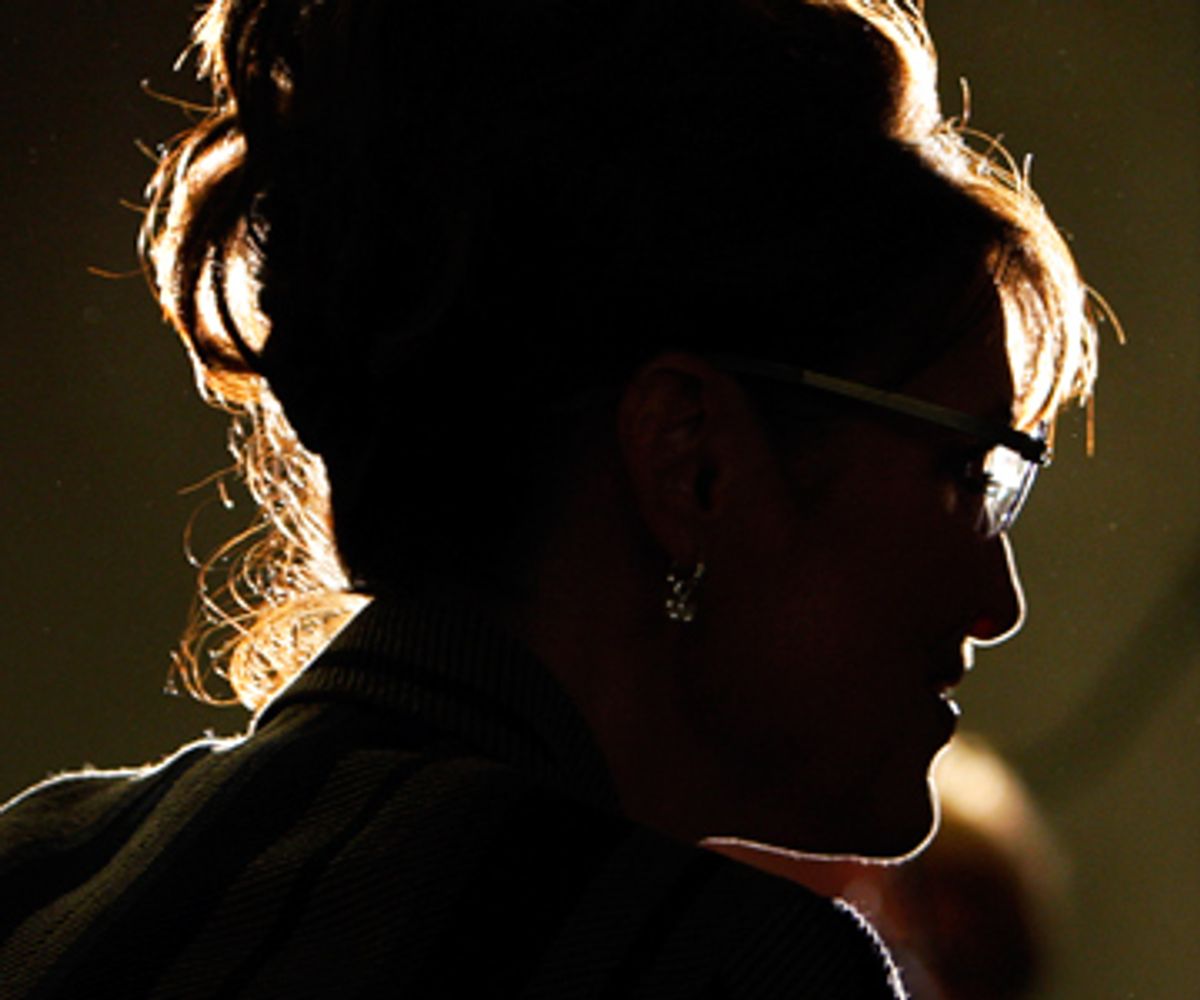 Before Sarah Palin decided to run for the Wasilla mayor's office in 1996 against incumbent John Stein, the Palins and Steins were friends. John Stein had helped launch Palin's political career, mentoring the hockey mom during her 1994 run for City Council, along with veteran council member Nick Carney. Stein's wife, Karen Marie, went to aerobics classes with Palin.

But when she announced her candidacy for Stein's seat, vowing to overturn the city's "old boy" establishment, a different Sarah Palin emerged. "Things got very ugly," recalled Naomi Tigner, a friend of the Steins. "Sarah became very mean-spirited."

The Wasilla mayor's seat is nonpartisan, and Mayor Stein, a former city planner who had held the post for nine years, ran a businesslike campaign that stressed his experience and competency. But Palin ignited the traditionally low-key race with scorching social issues, injecting "God, guns and abortion into the race -- things that had nothing to do with being mayor of a small town," according to Tigner.

Palin's mayoral campaign rode the wave of conservative, evangelical fervor that was sweeping Alaska in the '90s. Suddenly candidates' social values, not their ability to manage the roads and sewer systems, were dominating the debate. "Sarah and I were both Republicans, but this was an entirely new slant to local politics -- much more aggressive than anything I'd ever seen," said Stein, looking back at the election that put Palin on the political map.

There was a knife-sharp, personal edge to Palin's campaign that many locals found disturbing, particularly because of the warm relationship between Palin and Stein before the race.

"I called Sarah's campaign for mayor the end of the age of innocence in Wasilla," said Carney.

Even though Palin knew that Stein is a Protestant Christian, from a Pennsylvania Dutch background, her campaign began circulating the word that she would be "Wasilla's first Christian mayor." Some of Stein's supporters interpreted this as an attempt to portray Stein as Jewish in the heavily evangelical community. Stein himself, an eminently reasonable and reflective man, thinks "they were redefining Christianity to mean born-agains."

The Palin campaign also started another vicious whisper campaign, spreading the word that Stein and his wife -- who had chosen to keep her own last name when they were married -- were not legally wed. Again, Palin knew the truth, Stein said, but chose to muddy the waters. "We actually had to produce our marriage certificate," recalled Stein, whose wife died of breast cancer in 2005 without ever reconciling with Palin.

"I had a hand in creating Sarah, but in the end she blew me out of the water," Stein said, sounding more wearily ironic than bitter. "Sarah's on a mission, she's an opportunist."

According to some political observers in Alaska, this pattern -- exploiting "old-boy" mentors and then turning against them for her own advantage -- defines Sarah Palin's rise to power. Again and again, Palin has charmed powerful political patrons, and then rejected them when it suited her purposes. She has crafted a public image as a clean politics reformer, but in truth, she has only blown the whistle on political corruption when it was expedient for her to do so. Above all, Palin is a dynamo of ambition, shrewdly maneuvering her way through the notoriously compromised world of Alaska politics, making and breaking alliances along the way.

"When Palin takes credit for knocking off the old-boy network in Alaska, it drives me crazy," said Andrew Halcro, an Anchorage businessman and radio talk show host who ran against her in the 2006 GOP primary race for governor. "Sarah certainly availed herself of that network whenever it was expedient."

With its frontier political infrastructure and its geyser of oil money, Alaska has become as notorious as a third-world petro-kingdom. In recent years, scandal has seeped throughout the state's political circles -- and at the center of this widening spill is Alaska's powerful patronage king, Republican Sen. Ted Stevens, and wealthy oil contractor Bill Allen.

Despite Palin's reform reputation, she has maintained a delicate relationship with Stevens over the years -- courting his endorsement for governor, then distancing herself after his 2007 federal indictment on corruption charges, and then cozying up again when it appeared he might survive politically. As for Allen -- the former oil roughneck whose North Slope wealth has greased many a palm in Alaska -- Palin found nothing wrong with his money when she ran for lieutenant governor in 2002.

But once a powerful patron becomes a major liability, Palin is quick to jettison him. Alaska state Rep. Victor Kohring, another key Palin supporter during her political rise in Mat-Su Valley, found this out after he became a victim of the FBI's oil corruption sting operation. Kohring, who used to accompany Palin on her campaign jaunts, angrily points out that he was abandoned by his fellow Christian conservative before he even went to trial. The former Alaska legislator, who now resides in the Taft minimum security prison outside Bakersfield, Calif., communicated his views of Palin through his friend, Fred James. Kohring, said James, feels "betrayed" by Palin.

"After Vic's indictment, she didn't give him the time of day," said James. "She never went to him personally and asked if the charges were true. This is a man who helped her get started in government. She turned her back on him well before he even went on trial. Vic resents the hell out of that. He thinks she's an opportunist, pure and simple. She saw how the press were moving on Vic, and even before he had his day in court, she called on him to resign his office. He regarded that as a great insult, a personal betrayal."

Palin's reputation as a reformer stems primarily from her headline-grabbing ouster of state GOP chairman Randy Ruedrich from the Alaska Oil and Gas Conservation Commission for flagrant conflict-of-interest abuses. At the time, Palin was heralded in the press as a whistle-blower, but it was later revealed that she was guilty of the same charge that she had brought against Ruedrich -- using state office equipment for partisan political business. (While still mayor of Wasilla, she sent out campaign fundraising appeals from her office during her race for lieutenant governor.)

Others suspect that Palin had self-serving reasons for taking on Ruedrich and resigning her seat on the commission. The state energy panel had ignited a public firestorm in Palin's home base, Mat-Su Valley, by secretly leasing sub-surface drilling rights on thousands of residential lots to a Colorado-based gas producer. Outraged farmers and homeowners, who woke up one morning to find drilling equipment being hauled onto their land, were in open revolt against the commission. While Palin initially supported the leasing plan, she was shrewd enough to realize it was political suicide to alienate conservative property owners in her own district. According to some accounts, she was also growing tired of commuting to state offices in Anchorage and poring over dry, tedious technical manuals for her job. All in all, it seemed like the right move to jump ship -- and going out a hero was an added plus.

In the end, Ruedrich admitted wrongdoing and settled the ethics case by paying $12,000 in civil fines. But Palin did not drive the well-connected Republican operative into exile. In fact, he remains the party's state chairman and he could be seen on the floor of the Republican convention in St. Paul, Minn., hugging the newly crowned vice-presidential candidate and cheering her feisty speech against greedy old boys like, well, him.

"The idea that Sarah shook up the state's old-boy network is one big fantasy, it's complete bullshit," Halcro said. "She got all this public acclaim for throwing people who backed her under the bus -- but she only did it after they became expendable, when she no longer needed them.

"The good old boys in Alaska are still the good old boys -- they're alive and kicking. Randy is still running the Republican Party -- he wasn't happy about being turned into a national poster boy for corruption, but he went along with the program. Ted Stevens is still running for reelection. And [scandal-tainted Alaska Rep.] Don Young is, too. So where's the new era of change that Palin supposedly brought to Alaska?"