Obama goes over the top in bashing Mahmoud Ahmadinejad

Once again, U.S. politicians, including both Sarah Palin and Barack Obama, pile on the Iranian president. Why does Larry King (!) sound like the adult in the room? 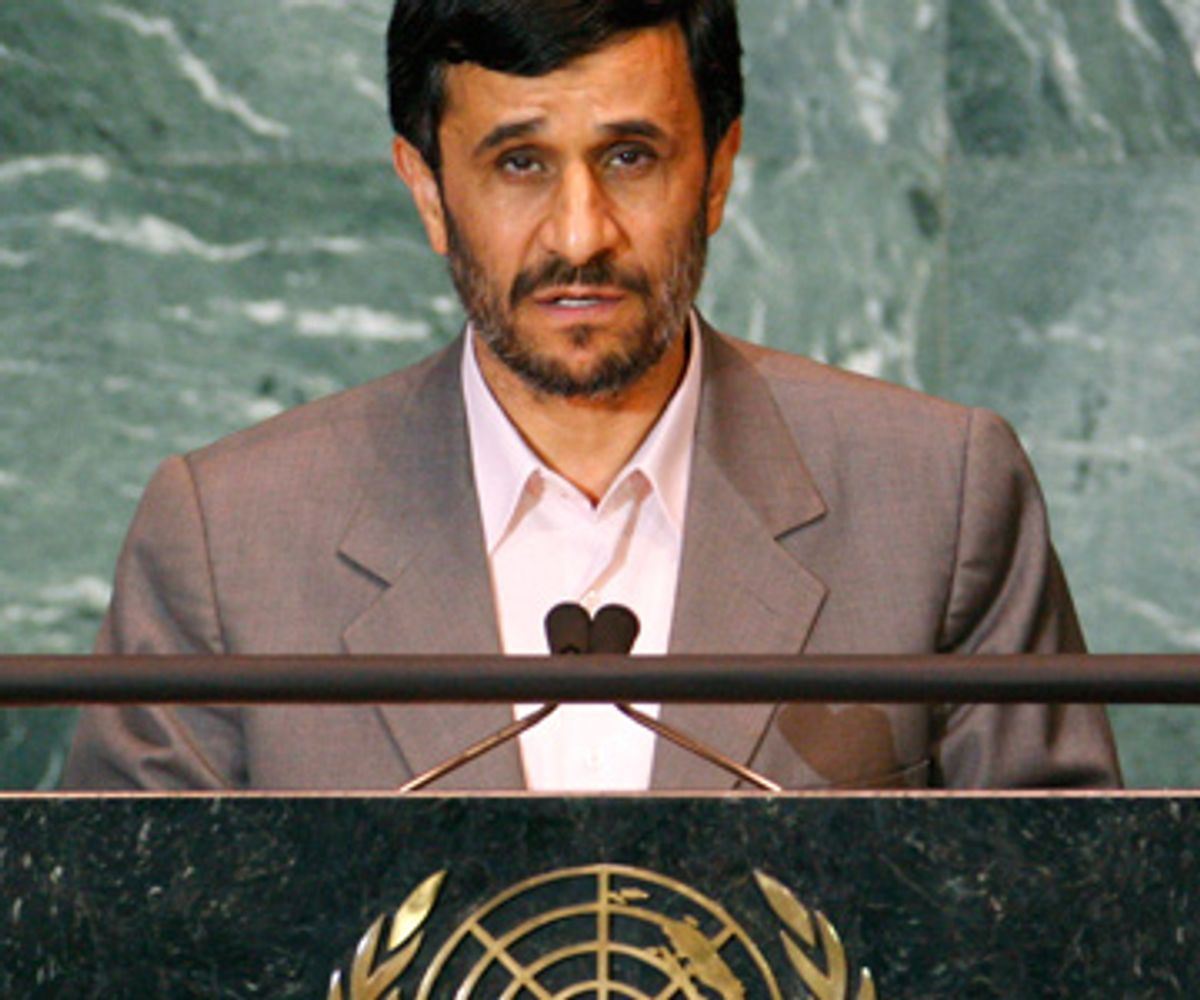 Sen. Barack Obama responded with outrage to the remarks made Tuesday by Iranian President Mahmoud Ahmadinejad before the United Nations General Assembly, expressing regret that the quirky little president was even allowed to speak. Obama's denunciation was mild compared with that of Gov. Sarah Palin, who accused Ahmadinejad of dreaming "of being an agent in a 'Final Solution' -- the elimination of the Jewish people." In contrast, "Larry King Live" carried an hourlong interview with Ahmadinejad in which the Iranian was allowed to speak for himself and repeatedly denied any violent intentions. King thus reinforced the trend whereby entertainment television, whether Jon Stewart's "The Daily Show" or King's own dog-and-pony interview hour, conveys reality-based news while politicians continue to paint inaccurate and even fantastic scenarios that are harmful to U.S. foreign policy.

In his speech, Ahmadinejad said "the American empire ... is reaching the end of the road" and accused the U.N. Security Council of allowing "Zionist murders" because of "pressure from a few bullying powers." Obama issued a statement saying, "I strongly condemn President Ahmadinejad's outrageous remarks at the United Nations, and am disappointed that he had a platform to air his hateful and anti-Semitic views." He added, "The threat from Iran's nuclear program is grave." Obama then called on his rival in the presidential race, Sen. John McCain, "to join me in supporting a bipartisan bill to increase pressure on the Iranian regime by allowing states and private companies to divest from companies doing business in Iran." He slammed McCain, saying that the senator was playing partisan politics by declining to join Obama in this divestment campaign.

In the heat of the campaign, Obama surely overreached himself in appearing to advocate barring leaders of member states from addressing the United Nations because their views are obnoxious to Americans. He also fell into the trap of declining to make a distinction between anti-Zionist views and anti-Semitic ones. If a policy of exclusion had been adopted by past administrations, Soviet Premier Mikhail Gorbachev could not have announced from that podium the reduction of Red Army forces in Eastern Europe in 1988. And if anti-American statements should trigger the denial of a visa to come to New York, should Nelson Mandela, who called the United States the "most dangerous country in the world," be excluded, too?

Obama's assertion that Iran's civilian nuclear energy research program constitutes a "grave threat" may or may not be true. The 2005 National Intelligence Estimate put Iran at least a decade away from having a nuclear weapon if it was trying hard to get one and if the international environment was conducive (i.e., if Iran could import all the equipment it needed easily). Neither of those conditions actually appears to exist, so Iran is very far away from having a bomb. The 2007 National Intelligence Estimate on Iran, parts of which were released last December, concluded that Iranian scientists have not done any weapons-related research since early 2003.

As Ahmadinejad pointed out to Larry King, no country has been as intensely inspected by the International Atomic Energy Agency as Iran. No regularly inspected country has ever developed a nuclear bomb. Although the IAEA's Mohamed ElBaradei has expressed frustration that Iran failed to declare its nuclear research program before 2003, he continues to say that in current inspections, "the Agency has been able to continue to verify the non-diversion of declared nuclear material in Iran" to weapons purposes. This consistent IAEA finding through recent years raises the question of whether Obama is right to be so categorical on this issue.

As for the imposition of economic sanctions on Iran, it might be worth considering for a moment whether the U.S., with its faltering economy, is even able to cause a major oil exporter such as Iran much harm through a unilateral boycott. The law passed by Congress at the insistence of the Israel lobby, placing sanctions on firms doing business in Iran, does not punish those who merely distribute or import Iranian petroleum. Does Obama want to go even further with sanctions? If Congress really could close down Iran's production of 4 million barrels a day, it would cause the price of petroleum to soar and throw the U.S. into a deep recession or depression. From the point of view of a reality-based foreign policy, this sort of step is known as "cutting off your nose to spite your face." Russia and China are now balking at placing any further sanctions on Iran via the United Nations Security Council. (Russia is not exactly in a cooperative mood after the drubbing it took from U.S. politicians over its intervention to protect South Ossetia from Georgia.)

The sanctions have in any case had no effect on Iranian policy, though they are keeping Iran's gas fields from being developed by American and European firms, a task that may fall to Russia's Gazprom or its Chinese counterpart instead. (One would not advise a President Obama to threaten to cut off economic cooperation with China over its Iran investments, given how much U.S. debt Beijing holds.) Since natural gas is a global market, this boycott of Iran harms American consumers twice, causing the price of gas to be higher than necessary and making sure that the development of Iranian gas creates no jobs for Americans and brings no profits into this country.

If Obama's reaction to Ahmadinejad was a bit breathless and probably counterproductive to U.S. interests, Gov. Palin's was, typically, like something from outer space. In a speech the Republican vice-presidential nominee had planned to give at an anti-Ahmadinejad rally on Monday, organized by right-wing Zionist organizations before they decided not to have major politicians speak, she alleged that the Iranian president "dreams of being an agent in a 'Final Solution' -- the elimination of the Jewish people. He has called Israel a 'stinking corpse' that is 'on its way to annihilation.' She warned apocalyptically that Iran had tested missiles capable of reaching Tel Aviv and that "the Iranian nuclear program is nearing completion."

But is the Iranian president genocidal? Ahmadinejad explained on "Larry King Live" (you'd think at least Palin would watch that even if she does not, like, read books and newspapers) that there are some 20,000 Jews in Iran, who have a representative in Parliament. That representative, Maurice Motemad, and leaders of the Iranian Jewish community, have repeatedly protested to Ahmadinejad over his minimizing the extent of the Holocaust. Ahmadinejad told King, "We don't have a problem with the Jewish people" (ma ba mardom-e yahud moshkeli nadarim). If Ahmadinejad wanted to launch a second Holocaust, would he not begin at home? It is tiresome to keep having to repeat it, but, moreover, Ahmadinejad does not have the power to launch any massacres, since the presidency in Iran is a weak position similar to that of our secretary of the interior. The commander in chief of the armed forces is Ayatollah Ali Khamenei, who has pledged an Iranian policy of no first strike against any country.

As for Jews in Israel, Iran has not threatened to kill any of them, much less all of them. On "Larry King Live," Ahmadinejad expressed the hope that the Israeli state will collapse just as the apartheid regime in South Africa did. In other words, he is advocating a variant of the one-state solution to the Israeli-Palestinian conflict. While his version of that one state is unrealistic and unfair to Israeli Jews and does not have a prayer of being realized, it is not a genocide, and it is a barefaced lie to say that it entails the killing of anyone. As Larry King admitted, the South African minority government fell peacefully.

Ahmadinejad was forced again to explain that when he quoted Ayatollah Khomeini to the effect that "this occupation regime over Jerusalem must vanish from the page of time," he did not mean that "Israel must be wiped off the face of the map" (as the quotation was mistranslated). He told King Tuesday night that he meant that the Israeli state's policies of committing crimes against the Palestinians and killing them and occupying them must vanish. He added, "Our solution is in fact a completely humane and democratic one. What we're saying is that throughout the Palestinian territories [i.e., including Israel and the occupied territories], people should gather and determine the type of government they would like to have." In other words, he says he means by the vanishing of the regime a single democratically elected state in Israel and Palestine.

Committed Zionists, that is to say, Jewish nationalists, who believe that Israel must remain a Jewish-majority state, often see the advocacy of a one-state solution (in which Israeli Jews might be reduced to a simple majority or even only a plurality of the population) as a dire threat to the Jewish people. They are also known to smear anyone who demurs from their rigid conception of nationalism as an anti-Semite or even a terrorist. However, neither their conviction that any criticism of Israel must be prohibited, nor their insistence on a state dominated by a single ethnicity, nor their often unpleasant tactics of the destruction of reputations should stand in the way of Americans seeking an unblinkered understanding of contemporary Iran and pursuing American interests in regard to relations with Tehran.

It is legitimate to question the truthfulness of Iranian assertions about the character of their nuclear energy research program. It is a wise policy to pressure Tehran to allow even more rigorous inspections, to permit surprise inspections, and to explain just what the country was up to before early 2003. Scaled sanctions to get Iran to give up its enrichment program altogether might work if these sticks were combined with more carrots. The Iranian regime has made numerous hateful comments about Israel and is hostile to the Zionist state, and it is natural that this rhetoric should make the Israelis nervous. A reason for caution, watchfulness and deterrence, however, is not necessarily grounds for war. The United States faced down the Soviet Union without ever having gone directly to war against it, after all.

But to distort the colorful Ahmadinejad's words, to mistranslate him, to misrepresent him as in control of the Iranian military, or to pretend that he represents a consensus in the Iranian political elite is to build a fantasy world as insubstantial and whimsical as a SimCity computer game. Larry King got at the true Ahmadinejad, with all his flaws, more accurately and extensively than anything else on American television or in political rhetoric. It is clear that for the U.S. to go to war over an imaginary threat of genocide (Iran does not have the ability to kill large numbers of Israelis and consistently denies that it wants to) at a time when its military is overstretched by two protracted guerrilla wars, when its financial system is near collapse, and when the resulting run-up in oil prices would cripple the U.S. and world economies would be a folly so great that only a lunatic would contemplate it. As foolish and hateful as Ahmadinejad can be, it remains to be seen if we are any better.