Trying to duck Friday's debate so he can "work on the economy" doesn't look presidential, it looks cowardly. 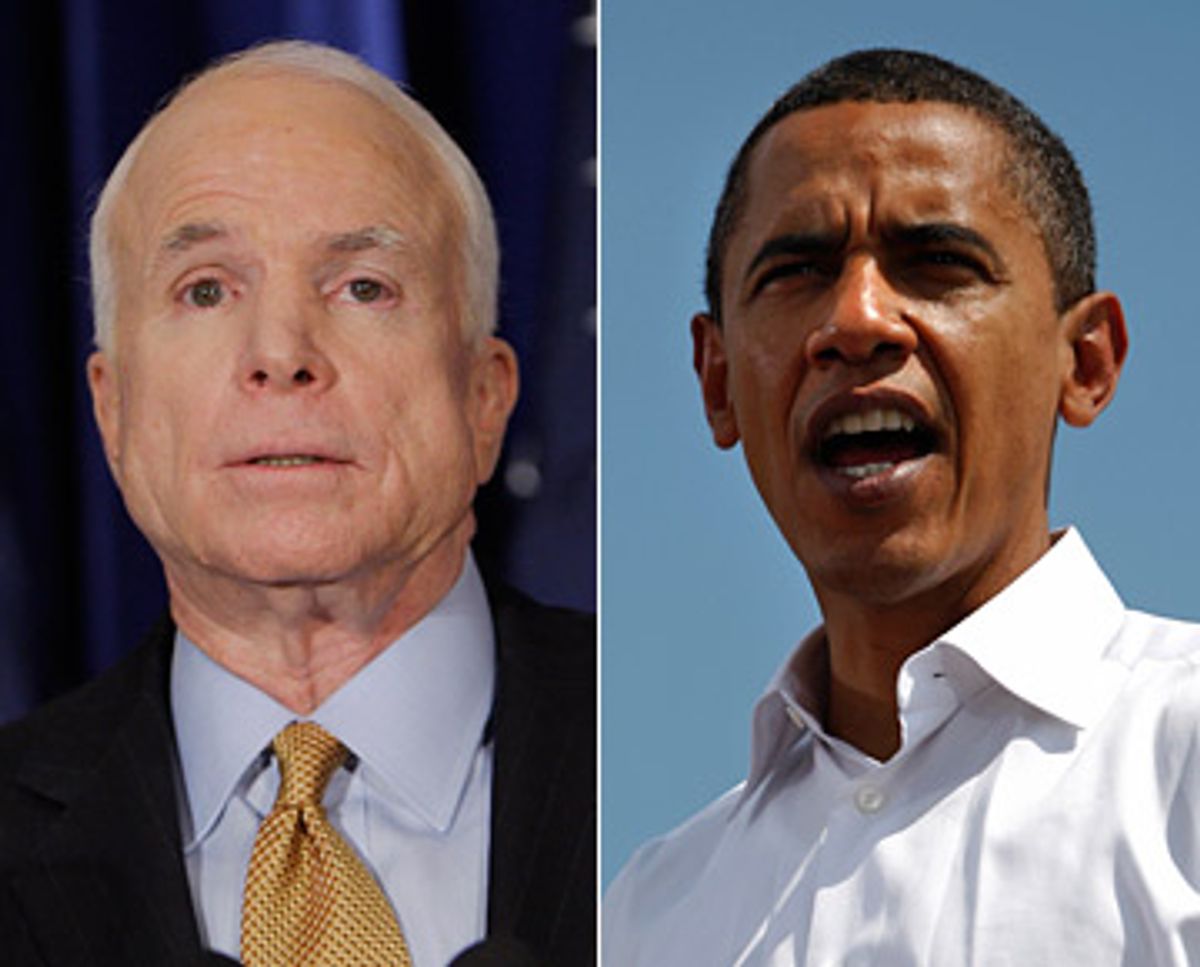 I'm sorry for my silence these last few days. I took a couple of days off for my birthday, and after that promptly got sick. (Clearly I'm the kind of person who will never be able to retire.)

So I've been home with a fever watching television these last two days, and boy, this latest John McCain gambit -- calling on Obama to cancel Friday's debate -- seems crazy to me. Now, I'll admit, the last McCain decision that seemed crazy to me was his selection of Sarah Palin, and the short-term Palin bounce seemed to prove me wrong; I still believe I'll be right in the long term, and Palin's climbing negatives give me reason for optimism on that score.

Clearly McCain's gambit is political, but I think it's bad politics. I actually think a foreign-policy debate was the only hope McCain had for taking back momentum after a week in which his lifelong devotion to corporate deregulation caught up with him, despite his lying about it. Now, I trust Obama to be smart enough to tie the current financial crisis to foreign policy -- fairly, not as a stretch, given the global dimensions of the turmoil. But it would have also provided McCain with an opportunity to taunt Obama about his opposition to the so-called surge in Iraq, and to change the subject generally -- and that could potentially be good news for McCain.

McCain campaign czar Steve Schmidt apparently thinks calling on Obama to cancel the debate is another big game-changing gambit, à la the Palin choice, but I think Americans will see it for what it is, a political stunt. It makes McCain look cowardly, like he's not ready to mix it up with Obama, and like he's hiding from the perilous economic developments of the last few weeks. (I'd probably hide, too, if I'd been insisting until recently that the economy is fundamentally strong.) It looks especially bad since it comes on the heels of Obama reaching out to McCain to suggest that they collaborate on a joint proposal for principles to guide the bailout. McCain seemed to agree -- but then went out and proposed they cancel the Friday debate.

Talking to the media a few minutes ago, Obama disagreed. "It's my belief that this is exactly the time when Americans need to hear from the person who in approximately 40 days will be responsible for dealing with this mess," Obama said. "It will be part of the president's job to deal with more things at once. In my mind, actually, it's more important than ever that we present ourselves to the American people." That's presidential.

I'd say the numbers McCain is looking at have nothing to do with the stock market or the dimensions of the bailout proposal. The numbers motivating McCain are polling numbers, and Obama's rise this week clearly has the Republican nominee on the ropes. Obama's up by 9 points in today's ABC News/Washington Post poll, an 11-point swing in just a week. Just-released CNN polls show Obama up by 4 in Colorado, 5 in Michigan, 9 in Pennsylvania. Candidates start to do desperate things at times like this, and McCain's trying to duck the Friday debate is one of them. He will regret it.