Why you should eat fat

From its surprising health benefits to its unrivaled deliciousness, "the greasy killer" is anything but, says author Jennifer McLagan. 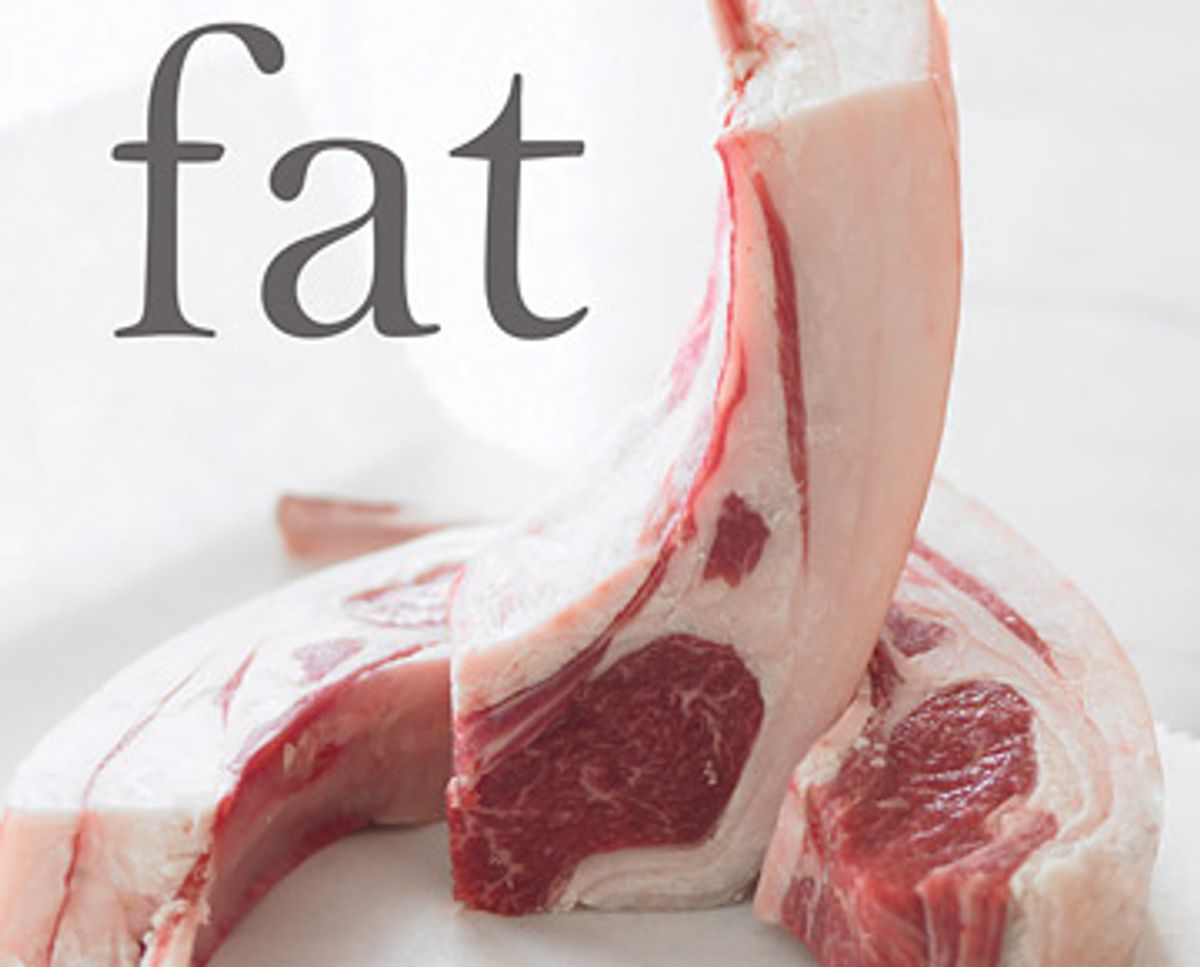 Jennifer McLagan is on a mission: to dispel the myth that fat is a "greasy killer." Or, as she writes in her new book, "Fat: An Appreciation of a Misunderstood Ingredient, With Recipes": "Human nutrition is complex, and no two bodies function the same way, but for the majority of us, eating animal fat is not the death sentence we have been led to believe."

The book tackles the controversies that have long been swirling around fat, from the fact that doctors praised the wonders of a low-fat diet only to watch as that wisdom was contradicted by a major 2006 study to the more recent study that indicated there may not, after all, be a direct link between obesity and heart attacks. On the other end of the spectrum, of course, there is Dr. Atkins and his contrarian high-fat-diet approach to getting healthy.

But McLagan's book is about more than mere science. It is divided into sections based on types of fat: butter, pork fat, poultry fat, and beef and lamb fats. Since many of these fats (except butter) are not easily available commercially, McLagan teaches the reader how to render each one specifically. A skilled writer, McLagan presents her case for the armchair reader at the same time she offers enticing recipes for the seasoned cook: bacon baklava, marrow rice pudding, and lamb fat and spinach chapati.

"Fat" is an unapologetic celebration of its title ingredient and a compelling argument that explains not only why fat is a fundamental flavor but also fundamental to our health.

There has been a huge movement against the consumption of fatty foods over the past 30 years or so. So why is obesity such a challenge in America today?

It's difficult to blame obesity on one thing. But it is definitely not consumption of animal fats. I think there are many causes -- the way we eat, alone, in the car, walking down the street, the constant snacking. Increased consumption of low-fat, fat-free "foods" results in us eating more sugars and carbohydrates. These products don't satisfy our hunger and leave us wanting to eat more. Eating good animal fat does, so you eat less.

It's also how we relate to our food. We consume large portions of prepared foods, huge portions. Food is relatively cheap: We spend less than 10 percent of our income on it. Consequently, we don't value it. Many see it simply as fuel or a medicine, not a pleasure. Because people have become so disconnected from their food, they fear it and continually break it down into good and bad elements.

There's also a widespread myth that making food from scratch takes too much time and is expensive. It may not always be quicker, but it is better for you and cheaper when all the costs are considered.

If we cooked our food, sat down at a table with friends and family and enjoyed eating it, we would be healthier, happier and probably thinner.

The French appear to have a positive relationship with fat whereas North Americans do not. Why is that?

I think most cultures, especially the French, have a positive relationship with their food and this carries through to fat. Look at how the Ukrainians regard their salo [salt-rendered pork fat]. They see food as something to enjoy and celebrate, and they treat it with respect. It probably helps that their food is more expensive, but, for example, look at how the food is labeled in France. It states the origin, producer and tradition: Terroir is important, whereas here it is calories and chemical composition. In North America we fear our food, but we have to eat, so our relationship is [hopelessly split]. We lack a food culture.

However, I believe many cultures are threatened today as they adopt American habits and embrace fast and industrial food. Even in France, which is not immune from the dominant American culture, there is a problem of obesity among the younger generation.

In the book you write, "We are a generation that is computer literate but food illiterate."

I think many of us are food illiterate in the practical sense: We know the latest restaurant, hot new chef, current food trend or exotic vegetable, but we don't know how to roast a chicken. The British critic A. A. Gill spoke of "a generation that can read a menu in three languages but cannot write a recipe in their own."

Cooking should be a skill everybody masters. I am not talking about professional cooking. Everyone should know how to make something to eat. We all have to eat, and cooking dinner should be a simple, everyday act. It should be valued, not seen as a chore or a competitive sport. It is a rich, sensual experience that we can all take part in and enjoy.

But we are now so far removed from the source of our food that we no longer have any instinctive knowledge about our food and how to prepare it. We don't know if it is good or bad, ripe or rotten. Rather than listen to our grandparents, we turn to science and government -- or worse, celebrities -- to tell us how and what to eat. We let large companies prepare our food. It seems we can't even wash lettuce anymore! We are sentencing future generations to ignorance and industrial food.

Food shapes and expresses our culture, and our culture is revealed by how we treat and view our food.

How did animal fat, which was so popular in the early 20th century, lose out to Crisco?

Well, Crisco and other vegetable fats didn't do that well at first. True, they were cheaper and popular with food manufacturers, but people preferred lard, suet, poultry fat and butter to cook with.

The vegetable fats were aggressively promoted, but it was not until the 1970s -- when animal fat was declared "the greasy killer" and we were told to lower our consumption -- that vegetable fats became "the healthy fats." That's when their sales took off.

So how exactly is cooking with animal fat better for us?

Unlike vegetable oils, animal fats are very stable and don't turn rancid easily. This makes them ideal for cooking, which involves heating the fat. And they have no trans fats.

It is much easier to roast a bird or a joint of meat if it has a good quantity of fat. The fat guarantees taste and succulence. Without it, the meat will be dry and tasteless.

Animal fats have lots of good fatty acids that fight disease, help absorb vitamins and lower cholesterol. Your body burns the short-chained fatty acids found in animal fats and stores the long-chained ones found in polyunsaturated fat. It is a myth that eating animal fat makes you fat.

Animal fat also has a good ratio of essential fatty acids. Many of us have a skewed ratio thanks to too much vegetable oil. When this ratio is out of balance, it results in illness and depression.

But best of all, fat -- with its big round molecules -- tastes good, it feels good in your mouth, on your tongue and it carries flavors.

Talk about the animal fats you included in the book.

I included all the animal fats. That is to say, butter, which has its own chapter, because it is such a wonderfully unique fat. The other chapters are devoted to pork fat, poultry fat, and beef and lamb fat. The pork fat chapter reveals the versatility of pork fat, back fat, lard (rendered pork fat), leaf lard (best for making pastry), caul fat and bacon fat. Poultry fat includes duck, chicken and goose fats while the last chapter focuses on beef and lamb fats. These two fats are often overlooked, but bone marrow, suet, dripping and rendered beef and lamb fats all have their uses.

I explain how to render fat (a very simple process) and how to store fat and suggest different ways to add them into cooking. Animal fats are not all interchangeable, and I explain the special qualities of each fat.

Fat carries the flavor, plus fat in your meat or bird bastes and keeps it moist and juicy. You can't replace that with vegetable oil.

As I said before, animal fats are better suited for cooking as they are more stable and resist heat better than vegetable fats. By cooking your meat in the same fat, you can layer the flavor into a dish -- beef in beef fat, lamb in lamb fat, chicken in chicken fat and so on.

Carefully rendered pork fat is the exception. It is a neutral fat, which makes it ideal for everything from pastry to deep-frying. It adds texture: flakiness to pastry and crispiness to fried foods.

Are all fats created equally? How do trans fats fit into this equation?

No, all fats have different qualities. Trans-fat or man-made fat is often hydrogenated to extend its shelf life. That type of fat is hard for the body to digest and is universally condemned.

Is the American Heart Association breathing down your neck yet? What would you say to them?

Not yet. What would I say? Take my blood pressure reading, check my cholesterol and prove that animal fat is bad is for me.

In doing research for this book, what is the thing that caught you by surprise?

The subject of bog butter fascinated me. I never thought about preserving butter in a peat bog. In fact, until recently, it was assumed that ancient people had mislaid or accidentally dropped their butter and animal fats into the bogs. Today we always think we know better than our ancestors. However, it's been proven that the bogs were used to preserve and age the fat, so it would taste better. I also learned that scientists can distinguish between the fatty acids found on ancient pottery shards and tell us exactly what kind of fat was stored in the container. (In some areas we are smarter than our predecessors.)

What are some of your favorite recipes from the book?

I like them all. That's why I put them in. Several seem to have caught people's interest -- bacon mayonnaise, salted caramel tart, bacon baklava.

Today I would single out bone marrow tacos, messy but delicious -- and the end-of-season tomatoes are perfect for the accompanying salsa.

Monica Bhide writes about food and its affect on our lives. Her work has appeared in The Washington Post, The New York Times, Food & Wine and more.