The miracle of Spike Lee

The cinema icon talks about reshaping American mythology with his WWII epic, "Miracle at St. Anna," and what Hollywood would look like if he were in charge. 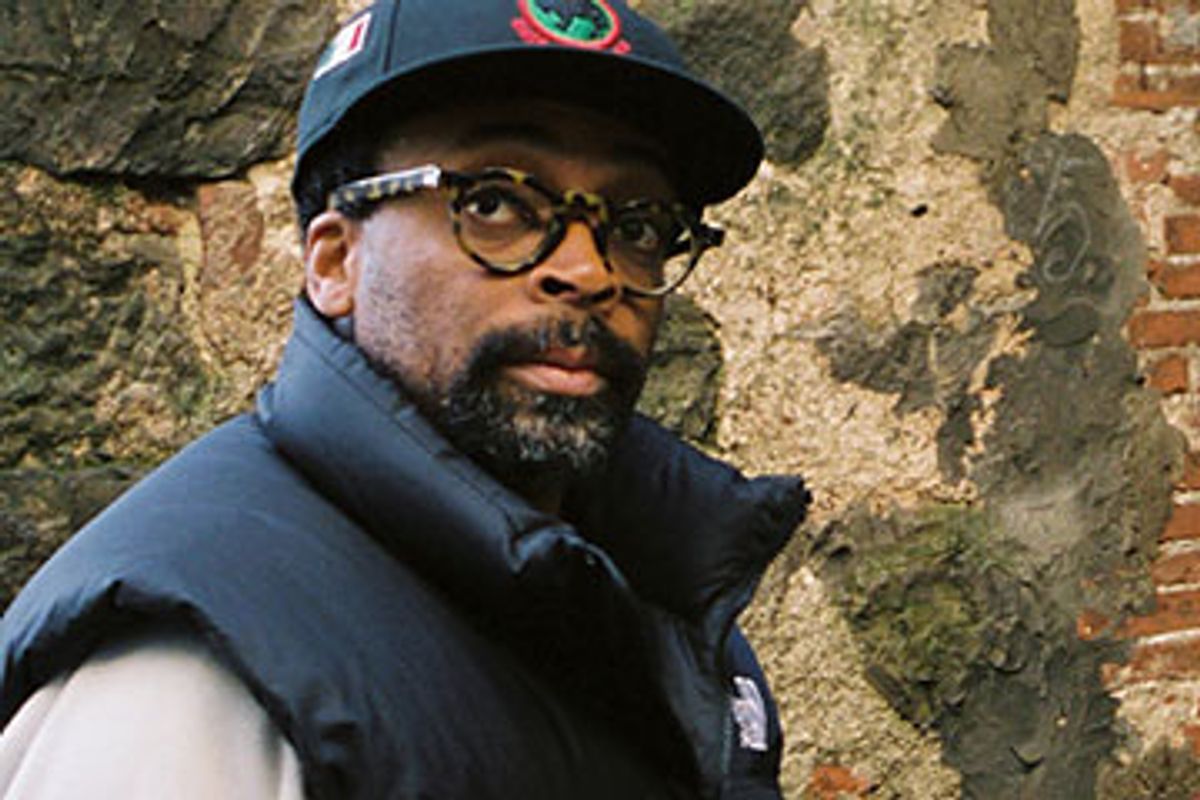 Do you remember the moment you gave up on Spike Lee? You might want to reverse your decision, because his new WWII epic, "Miracle at St. Anna," is the joint you've prayed he had in him all this time.

I gave up in 1992, during the overhyped and merely OK "Malcolm X," when Denzel Washington's voice-over describes the young Malcolm X's outrage at the way his teachers attempted to keep him in his place. He says something to the effect that he's been treated like a horse. As the speech concludes, Spike cuts to a horse. I was insulted -- this guy doesn't think I know what a horse looks like? I told myself I'd wait for some positive word-of-mouth before I dropped dollars on another Spike feature.

So I sat out duds like "Bamboozled" and "She Hate Me." Documentaries like the Oscar-nominated "4 Little Girls" suggested that his true talent lay there. But then came 2006's "Inside Man," Lee's ambitious effort to redefine the Hollywood blockbuster. Right, I thought, a staunchly independent cinema icon with an offbeat, cantankerous sensibility is going to pull that off. But to my surprise, Lee took a competent, clever bank heist film, infused it with his heterogeneous New York gestalt, and transformed it not only into a memorable examination of racism and sleazy post-9/11 politics but, above all, a sharp psychological thriller. The movie, a critical hit, took in $186 million worldwide. Instead of the customary "joint," Lee called it a "film."

It might all have ended there, or with several more bank robbery thrillers, had Lee not picked up James McBride's 2003 novel "Miracle at St. Anna." Intrigued by the story's compelling and fresh take on WWII, he has brought to the screen a complex fictional account of the real 92nd Infantry Division, a corps of black American soldiers (also called "Buffalo Soldiers"). The film follows four enlisted men who become trapped in a Tuscan village after a botched sortie. One of them, Train, is a simple-minded hulk who befriends a charmingly daft Italian kid, Angelo, who turns out to have survived a mass killing. McBride was inspired by a real mass murder that took place in the Tuscan village of Sant'Anna di Stazzema in 1944. Lee got into a tiff with Clint Eastwood recently when the diminutive Brooklynite pointed out that Eastwood's "Flags of Our Fathers" misrepresented the African-American presence in WWII. Eastwood said he should "Shut his face," to which Lee responded, "The man is not my father and we're not on a plantation." If you think Lee's retort seems saucy, "Miracle at St. Anna" is a gauntlet thrown at Eastwood's feet.

Intrigued by the Spike renaissance, I grabbed some phone time with Lee as he began a Normandy of publicity for the film's opening weekend. (Listen to the interview here.)

How did you come across the book "Miracle at St. Anna"?

Well, I needed something to read and I was in my wife's office, looking at her bookshelf. The spirit told me to take that one book out of the many books that were there. When I pulled it out of the bookcase I saw the cover with a black soldier and a young Italian boy and I said, What is this? And I read it, said I want to make it into a movie, called up James [McBride, who wrote the novel and screenplay], and we talked.

In some respects "Miracle at St. Anna" is meant to be a corrective for Hollywood World War II films that have omitted people of color.

Well, No. 1, that's not what I'm saying. I'm not going to make a movie just to correct something. I mean it's there, but that's not the reason I made the film. The reason I made the film is 'cause it's a great story. This is a piece of history that happened. You know, African-Americans have fought for this country, and have always been very patriotic -- the first person to die for the United States of America was a black man, Crispus Attucks, killed by the British, so this is not a news flash. But a lot of times history is made into mythology. So we address some of that mythology at the beginning of "Miracle at St. Anna" with the film "The Longest Day" [playing on the main character's TV in the present day]. That's a film about the invasion of Normandy with the icon of all American icons, John Wayne. You can't get more American than that. It will take more than one movie, with all the war films Hollywood has done without African-Americans, to set the record straight.

The 92nd was an actual infantry, but McBride's book is fiction.

It's not a historical text. When he was a young kid growing up in Brooklyn, about 10 years old, he'd go over to his uncle's house and his uncle would play cards and drink and get drunk and start telling war stories about himself and other black soldiers fighting the Nazis in Italy. That's how James got the inspiration for the book.

There are a lot of people speaking in their native languages in this movie.

I could not make a WWII film with Nazis speaking English. I made the decision that everyone speak their native language. This film is about barriers, language, culture, all that stuff. So how you gonna have a scene where Train is teaching [Angelo] to communicate by tapping on his chest if they're both speaking English? Where is going to be the conflict, the drama, with these four black American soldiers stumbling into a small Tuscan village if everyone is speaking the same language?

But you've also gone the extra step of, like, making sure that the Italian actors are speaking in Tuscan dialect.

Yeah, because they would kill me in Italy, the same way Americans would if I did a film that takes place in Brooklyn but people sound like they're from Oxford, Miss. It's gotta be authentic. This film was definitely influenced by the great Italian filmmakers of the neorealistic age: Roberto Rossellini, films like "Rome, Open City," "Paisá," "Germany Year Zero," [Vittorio De Sica's] "Miracle in Milan." If you look at the kid, Angelo, in "Miracle at St. Anna" [played by Matteo Sciabordi], he looks like he came directly out of "Open City" or "The Bicycle Thief."

You've always had a kind of subtle affinity for Italians and Italian-Americans.

I don't think it's subtle; I think it's very overt. I grew up in an Italian-American neighborhood in Brooklyn, Cobble Hill. From early on a lot of my friends were Italian-American. That's not subtle. Also, I've seen firsthand that relationships between Italian-Americans and African-Americans have been kind of volatile over the years, and that was reflected in the films "Do the Right Thing" and "Jungle Fever." "Miracle at St. Anna" really goes backward in time, where you had this relationship between black soldiers and Italians in WWII. These individuals saw the Buffalo Soldiers as their liberators, not as thugs or whatever. They were a part of the U.S. Army, which they'd been waiting on to liberate them from the tyranny of the Nazis and the last dregs of disaster under Mussolini.

It's interesting that the film not only shows us a part of black history that we haven't seen too often but also corrects the image of Europeans at the same time.

Definitely, yes, I'm glad you said that. Even the Italian actors talked about that; they were glad the Italians were not portrayed as stereotypical -- playing mandolins, drinking wine, singing, dancing and whatnot. Also, I wanted to show the Nazis in a different light, too -- not to make them heroes, but we felt there had to be a different way to portray Nazis than the one-note way I've seen in the films that come out of the Hollywood studios dealing with WWII. In Hollywood and on TV, you need villains. First you could say it was the Native Americans; they're the bad guys, they're the savages. Then came the Nazis; we kicked their ass. Then it was the Russians; right, their shit fell apart, until recently. And now, the No. 1 villain is the terrorists, the Arabs, the religion of Islam -- that's the boogeyman now. If they ever find bin Laden [laughs], then it's gonna be somebody else.

But what "Miracle" is saying is that there aren't these villains, there are just people and situations.

There are villains; I was not trying to pretty up that massacre scene. On Aug. 12, 1944, the 16th division of the SS massacred 500 innocent people [at Sant'Anna di Stazzema]: old men and women and children. That is a monstrous, barbaric act, so you can't get around that.

The film seems to suggest that while this was an evil act, a whole group of people were not necessarily villains for having done it.

That's one of the bad things about soldiers. They know they must, when their commanders demand it, commit inhumane acts, and most of the time they're going to follow orders. Then when they go up on war charges, what do they say? I was just following orders.

None of the lead characters in "Miracle" is a hero in the strictest sense. I was surprised by that.

What do you mean? Train, Bishop, Hector Negron -- I think they're very heroic. These are young black men that volunteered to fight for this country at a time when America was still considering them second-class citizens. That's definitely heroic.

What I mean is that they're heroes in that John McCain sense, that they fought bravely but they were captured --

Let's leave John McCain out of this.

But you know what I'm saying -- their story is more complicated than "they went over and kicked ass." It's more like, they're lucky any of them got back alive.

Well, we're being truthful. They were not put in the position to perform to the best of their abilities. The policy of the Army brass was that only white Southern commanders should command the Buffalo Soldiers because white men from the South supposedly knew how to deal with black folks, and consequently, when that was put in place, there was a terrible rapport between the black soldiers and their white deep-Southern officers.

What would Hollywood be like if Spike Lee ran it?

It'd be more diverse, in terms of hiring at studios and the acquisition of films. People try to pretend like they have the answers. They don't have the answers. Man, I still think William Goldman had the best quote ever: "Nobody knows nothing." When I sit across the table from these executives and they're telling me stuff, in my mind I'm saying, "You don't know what you're talking about. You don't have a crystal ball. You don't know what this thing can do. All you're thinking about is saving your neck and your job."

I understand that self-preservation is Rule No. 1, but I don't have a lot of respect for these people. I'd rather they said, "I'm doing this because I got to save my job." That I can respect. But when it comes to aesthetics, or film history, or what's happening, they don't know.