This exhilarating movie captures the way failure can open new paths and help us make sense of life. 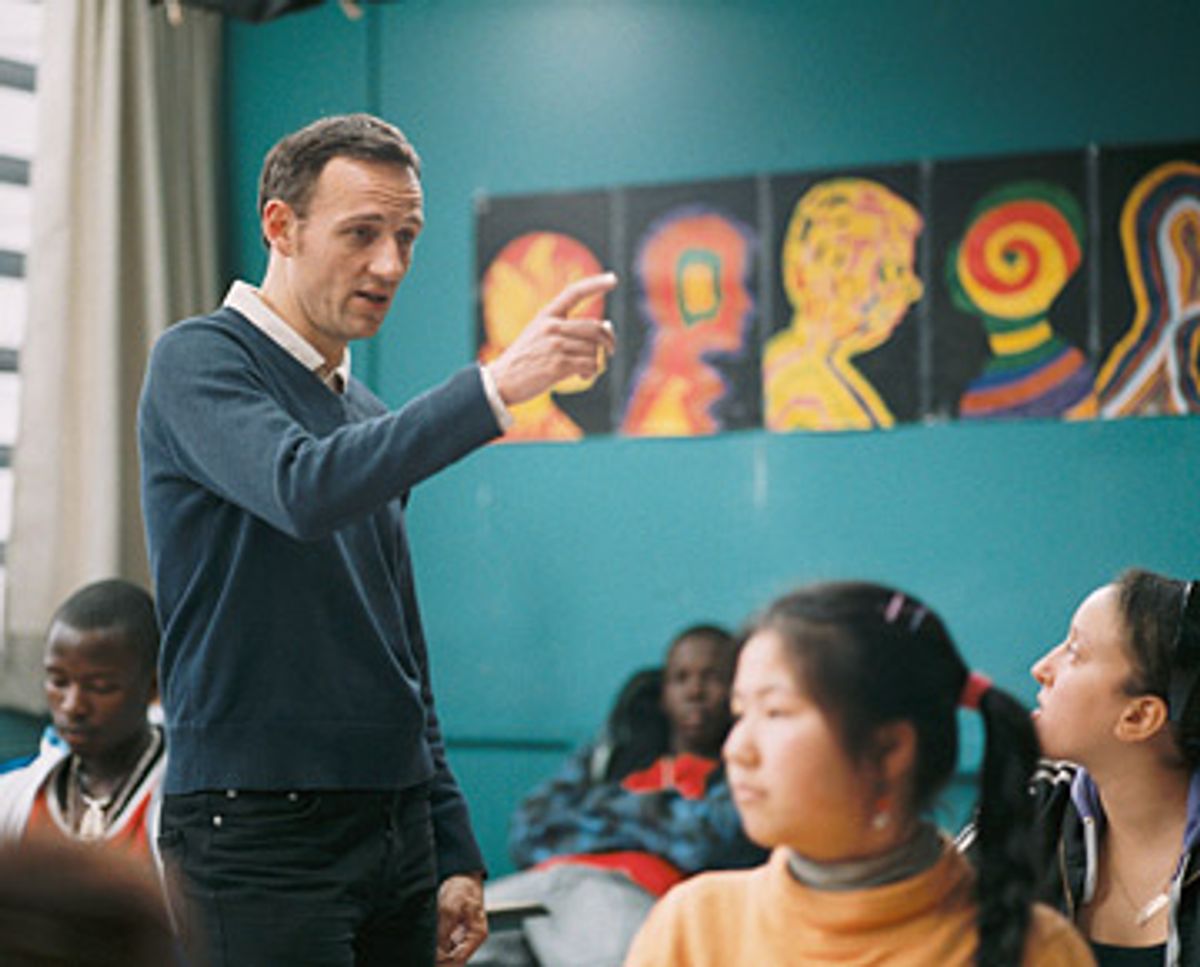 Laurent Cantet's "The Class," in which the characters' roles are played by real students and teachers, covers one school year in a French classroom, though it's not a documentary, nor is it your standard drama about the joys, triumphs and frustrations of shaping young minds. "The Class" veers between those two forms rather than conforming to them, and because of that, it's subtler and more complex than most films about the student-teacher relationship. It's a movie about the classroom not as a safe place isolated from the outside world, but as a place where disparate people from that outside world come together, with all the conflicts and revelations that that kind of messy mingling implies.

That's a paraphrase of what Cantet said about "The Class" during the press conference following the New York Film Festival screening of the film on Sept. 15. (The movie, winner of the Palm D'Or at Cannes, opens the New York Film Festival this Friday, and will officially open in New York on Dec. 12.) But describing it that way still doesn't come close to conveying what a light touch Cantet has with this subject -- how nuanced and affecting the picture ultimately is, without being anything so dreadful as "heartwarming." "The Class" is based on a book by François Bégaudeau, a teacher and writer in Paris who recorded his own experiences with students. Bégaudeau also stars in the film, playing perhaps not himself, but a version of himself. There was no set script (although Cantet and his frequent collaborator, Robin Campillo, did map out a story); Cantet and Bégaudeau found the student-actors at a school in Paris' 20th arrondissement, and held weekly workshops with them to flesh out the details of the story and the characters they would ultimately play. Cantet used three cameras: one to follow Bégaudeau's character (his name is Mr. Marin), another to focus on whichever student was the center of the action at a given time and the third to catch any spontaneous happenings in the classroom -- "a chair losing balance, a girl cutting her friend's hair, a daydreaming student who suddenly catches up to what is going on," as Cantet explains in the movie's productions notes.

Today so many fictional dramas use a shaky hand-held camera to convey a sense of spontaneity that the device has become a clichè (not to mention an annoyance). But those three cameras, with their sense of always being in the right place at the right time, help give "The Class" its vitality and immediacy. One lens or another captures the listlessness of the class on a given day, or the way one student might roll her eyes in a moment that goes unnoticed even by this very astute teacher, or a sly, conspiratorial glance between one student and another. "The Class" is a fictional narrative woven from threads of real life, and it sometimes feels more true to life than any strict documentary could.

At the beginning of "The Class," Mr. Marin comes off as one of those teachers who, if you were a student on your first day of class, you wouldn't know whether to love or hate. In the movie's opening scene, in which the teachers introduce themselves to one another and to us, we get some background on the school: It's in a rather tough Parisian neighborhood, and the students are racially mixed. The ones in Mr. Marin's class are certainly a lively bunch, and although he's strict with them (on the first day he lectures them about lateness, carping about the way wasted minutes eventually add up to wasted years), he also lets them challenge him in ways that aren't always respectful. At one point, a black Muslim student who we'll come to learn is named Souleymane, asks Mr. Marin if the rumor he's heard is true -- if Mr. Marin "likes men." Marin dances around the question in a way that makes us, and his students, unsure whether he'll answer it directly. But in the end, he does, and if the question is an intrusion on his privacy, his boldness in answering it also suggests that he strives to create an environment of openness and mutual respect among his students.

Openness and respect are all well and good, but fluidity -- as opposed to rigid restriction -- always comes with its share of problems, and "The Class" faces those problems squarely. One student, a young black woman named Khoumba (Rachel Régulier), has suddenly turned sullen and disrespectful, and Marin doesn't know why. He takes her aside after the session, reminding her that she was in his class the previous year and that they had gotten along well. What happened over the summer to change that? He wants to know.

Khoumba doesn't have a ready answer, and although she does become more cooperative as the semester wears on, there's no real dramatic transformation here. "The Class" isn't "To Sir, With Love" or "Dead Poets' Society" or "Goodbye, Mr. Chips." It's something much more elusive and touching -- perhaps what it's really about is how little impact teachers ultimately have on students' lives, in relation to how much of themselves they invest in trying to improve those lives.

But that doesn't make their efforts any less noble. And "The Class" isn't depressing; it's simply that the movie never goes for cheap uplift, which is exactly as you'd expect if you've seen any of Cantet's other movies, like the 2006 "Heading South" (about older women who travel to Haiti to find love, by paying for it, with younger men) or the 2001 "Time Out" (in which a man who's lost his job goes to great lengths to hide it from his family and friends). You could say Cantet has mastered the Cinema of Disappointment -- he's interested in exploring what people do, and how they feel, when they realize they've fallen short of their own expectations. Marin himself, clearly a terrific teacher, makes a grave mistake in "The Class," one that costs him -- somewhat unfairly, and perhaps only temporarily -- the respect of his students. "The Class" doesn't jack up the students' problems so it can give Marin the satisfaction of helping to solve them; in fact, most of their problems are never solved at all. An incident with Souleymane, in particular, causes an altercation in Marin's classroom that eventually has dire consequences for the young man. Marin also has to suffer the scheming and calculation of two catty but bright students (played by Atouma Dioumassy and Nitany Gueyes), who manipulate him in ways that are difficult for him to fight.

But Marin won't be undone by his small mistakes and failures. His real gift is his ability to remain open to his students, and we see it in the way he both accepts their jibing and also bats some of it right back at them. When they complain that, in the example sentences he uses to teach them grammar, he always comes up with "honky names" like "Bill," he shoots back, with good-natured crankiness, "If I start using names to suit all your origins, it will never end." Some of his male Muslim students have ideas about relating to women that are difficult for Marin (and us) to comprehend, but he tries to get them to explain their logic -- even if, in the end, he has to accept that their views follow no logic.

Marin isn't cowed by the way these students are "different" from himself. He rises to the challenge of understanding them -- but he also makes it clear that it's their responsibility to communicate with him. A culture of openness doesn't mean one of unilateral acceptance, an environment in which an individual's views should never be challenged. Marin challenges his students, just as they challenge him. And when his students get the better of him, tripping him up, he doesn't stay down for long. "The Class" is a lovely, exhilarating work about the ways in which failure and frustration can open the pathways through which we make sense out of life. There's no rousing music when it all comes together, partly because in "The Class" there is no point where it all comes together. But the evidence captured by those three cameras speaks for itself: A good teacher can't always give his students easy answers. He can only guide them toward those answers, even as he fumbles his own way forward.