The people who knew the brilliant writer best talk about the crippling anxiety and spiraling depression of his torturous final weeks. 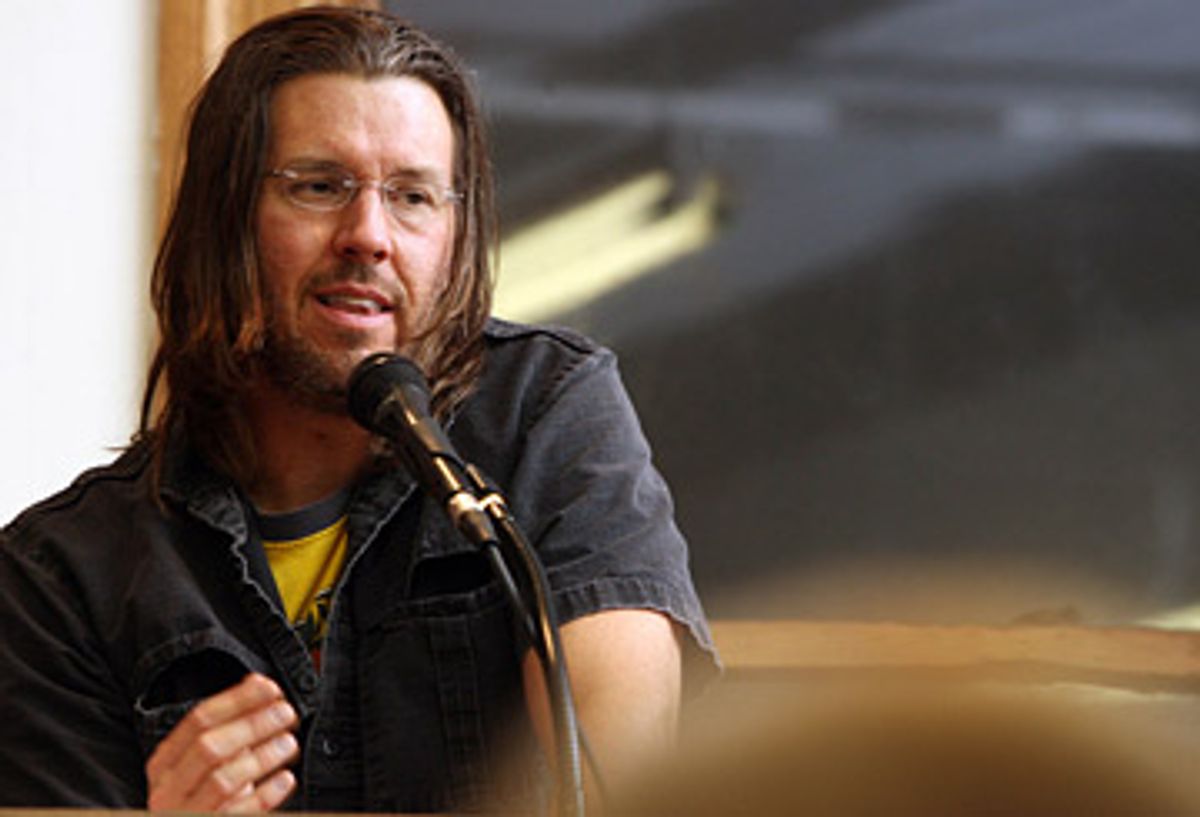 Following David Foster Wallace's suicide on Sept. 12, stunned fans, colleagues and friends paid tribute to the writer in countless articles and blog posts. They wrote of his imagination and breadth of knowledge, of the ways in which his books and essays inspired a generation of writers and forever altered the literary landscape. They used words like "virtuoso" and "genius." Many, like Jocelyn Zuckerman, the Gourmet editor who went to bat for Wallace's infamous and groundbreaking essay "Consider the Lobster," a masterwork that morphed from a scene piece about a festival in Maine into an essay about whether it's ethical to boil lobsters alive (short answer: no), now mourn the enormous talent the world has lost. "A lot of people," she says, "are really sad for all the books we're not going to get to read."

Those who knew him personally speak of his kindness: Longtime agent Bonnie Nadell recalls how he stood on line at FedEx the week before Christmas to mail an autographed book to a fan. "He would just do things like that because he was a really sweet person," she says. His students at Pomona College in Claremont, Calif., remember the committed, engaged teacher: Amanda Shapiro had taken writing classes with him the past three years, and recalls the copious comments she got back from him about her assignments. "He would write five pages of notes on a six-page story," she says, "and put so much care and thought into helping us as writers. He would type out the letters, and then annotate them, in pen, with little smiley faces and notes and corrections."

A common thread running through the many magazine and newspaper tributes, the online eulogies and recalled anecdotes, was shock. Wallace may have been a hugely influential and critically celebrated figure, the winner, in 1997, of a MacArthur Foundation "genius" grant, but he was also a very quiet one. He had given few interviews in recent years, and he found much of the fame that came with literary success, the adoration and spotlight that countless other writers would have killed for a taste of, embarrassing and uncomfortable. He taught creative writing at Pomona, wrote short stories and essays and attended the occasional book reading and conference. When news of his suicide began to spread, fans were left wondering: Why? Why had this gifted, funny, often disarmingly humble writer -- a man with seemingly so much to live for -- taken his own life?

Unbeknown to most, Wallace had suffered from clinical depression for the past two decades. Family and close friends knew of it, but few others did. Over those years, Wallace had taken powerful anti-depression medication that had allowed him to work and write, according to his father, James Donald Wallace. But recently the drugs had been having very serious side effects. In June of 2007, Wallace and his doctor decided that they would have to try another course of treatment.

"Going off the medication was just catastrophic," his father remembers. "Severe depression came back. They tried all kinds of things. He was hospitalized twice. Over the summer, he had a series of electro-convulsive therapy treatments, which just really left him very shaky and very fragile and unable to sleep."

Suffering from near-crippling anxiety, Wallace found himself unable to write. "I don't think he'd been able to write for more than a year," says his father. Wallace told the human resources department at Pomona College that he would be unable to teach there in the fall, and he was granted a medical leave for the fall semester.

"I knew this summer had been particularly bad," says Nadell. "My job was just to keep everyone and everything away from him."

On Aug. 18, Wallace's parents came to Claremont to stay with their son. Wallace's wife of four years, Karen Green, had been called away on an urgent family matter, and Wallace did not want to be left alone. He had canceled previous visits with his parents over the past year, telling them that he couldn't bear to have people in the house, even those he loved, so the invitation came as a welcome surprise to them.

When Mr. and Mrs. Wallace arrived, they found their son exhausted and gaunt. "He was very, very thin," says his mother. "He weighed about 140 pounds, so I immediately started to try to put 40 or 50 pounds on him, the way mothers will." She cooked and cleaned. Wallace couldn't eat, he told his sister later, but he liked the way the house smelled, and how clean everything was.

Mornings were spent walking Wallace's two dogs, Werner and Bella. Wallace and his parents strolled the streets of Claremont, talking of small things. In the afternoons, they spoke some more, and helped their son deal with the paperwork and insurance issues that had been piling up. "He was very glad we were there," says his mother. "And he was very emotional. He was just terrified of so much. We would just try to hold him." The memories bring tears. "He did tell me that he was glad I was his mom."

The time together, she says, was a gift. "We hadn't spent that much time with David since he was a small boy. Once they grow up and leave home you see them, of course, and you visit, but you don't spend hours and hours with them."

Toward the end of their visit, Wallace and his parents called his sister Amy. "I'm a public defender," she says, "and I had just lost a trial that I was really upset about. He was really in a lot of pain, but he said all the right big brother things, you know, like how lucky my client was to have me." She pauses. "That was the last time I spoke with him, and it was his last chance to be a big brother. I think it really made him feel better, at least for a few minutes. I know it made me feel better."

The respite, though, was brief. "He told me that he wasn't OK," she says. "He was trying really hard to be OK, but he wasn't."

His wife returned home shortly after, and, on Aug. 30, James and Sally flew back to their home in Urbana, Ill. It was the last time they would see their son. Two weeks later, Wallace hanged himself. He was 46.

News of Wallace's death shocked fans and colleagues worldwide, even those who knew firsthand of his struggles with depression. Longtime friends busied themselves with preparations for a memorial service in October, even though the very thought of speaking publicly of their friend filled them with dread. Jonathan Franzen, author of "The Corrections," who knew Wallace for two decades, found it nearly impossible to speak about him, noting that if the words barely came now, how, in a month, would he know what to say?

His sister Amy described emotions ranging from disbelief to sadness to acceptance, of a sort. "Inevitably our thought was, if only he could have held on a little bit longer," says sister Amy. "And then we realized, he did. How many extra weeks had he hung in there when he just couldn't bear it? So we're not angry at him. Not at all. We just miss him."

While friends and family recalled the anguish of Wallace's final weeks and days, they also wanted to talk about his sweetness, his unfailing politeness, his generosity of spirit. Amy spoke of the "magical uncle" who wasn't so big on kids, but adored his two nieces. "He took them to Disneyland a few years ago," she remembers, "and God, he hated stuff like that! Just all the people and the parking and the driving in L.A. But he absolutely delighted in being with them." His mother talked about him as a husband who had, in Karen, found his best friend and soul mate. A painter and mixed media artist with her own art gallery, Beautiful Crap, in Claremont, Karen had met Wallace through a mutual friend and married him on Dec. 27, 2004, in the Champaign County Courthouse in Urbana. "The happiest he had ever been in his life was being married to Karen," his mother says. "She was the one ideal person on the planet for him, and thank God he found her."

When David was 5, his mother recalls, he decided that he had two careers to look forward to. He would be a professional football player, for one. In the off-season, while the other players were recuperating or doing whatever it is that pro football players do when they're not running or passing or slamming their bodies into each other, he would be a neurosurgeon. His mother has no idea how, at 5, her son might have heard about neurosurgeons or what they were or did, but he had. The first day of his medical career, he promised his mom, he would take out all of her frayed nerves and fix them. "Somehow he knew about neurosurgeons," she says, "and he knew that my nerves needed fixing."

After Wallace's death, readers began revisiting his books and essays, searching for clues to his death, hints of suicide notes planted between the lines. There were, of course, plenty to be found. There were references to depression, death, paranoia and, yes, suicide -- more and more clues, the more one chose to look. But those who knew him hope that what we now know of the demons he struggled against won't forever color the way his books are read, or the way he is remembered.

"I understand that he was apparently depressed, but that wasn't the only important part of his life," says former student Amanda Shapiro. "And I don't think that's where his genius came from. I think his genius came more out of his passion, and the things that he thought were worth living for and writing about in the world."

"I hope he'll be remembered in the way that every writer hopes to be remembered," says Little, Brown publisher Michael Pietsch, who acquired and edited "Infinite Jest" in 1992 and had worked with Wallace ever since. "That people will continue to read his books. His mind is there on every page. 'Infinite Jest,' in particular, is one of the great works of a mind in our time."