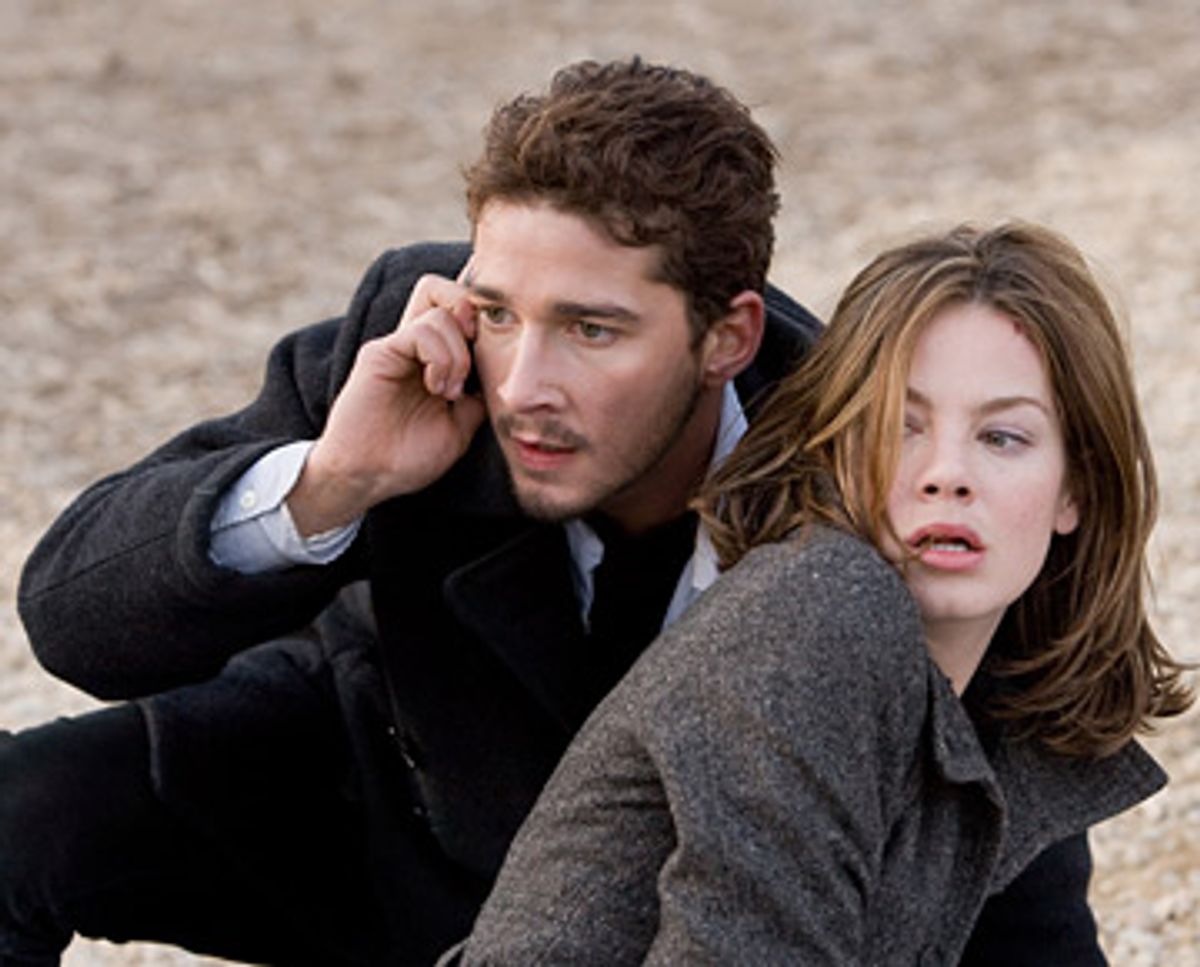 "Eagle Eye" is a mildly entertaining political thriller with a plot that's nicely worked out in some places and frustratingly murky in others -- it toddles dutifully in the direction of being an intelligent diversion, only to be sidetracked and tripped up by its own ambitions. Shia LaBeouf plays Jerry Shaw, an underachieving, lackadaisical charmer who works in a Chicago copy shop (it has the whimsical name "Copy Cabana") and barely has two shekels to rub together. His landlady (played by Lynn Cohen) tends to lurk in the hallway of his apartment building in her bathrobe, hoping to shake some rent out of his perpetually empty pockets. Suddenly, Jerry's twin brother -- as much an overachiever as Jerry is a slacker -- dies, and weird things begin to happen. When Jerry goes to the ATM to deposit a check into his shrunken bank account, hundreds of dollars' worth of dough shoot out of the slot. And when his cellphone rings, the person on the other end is a woman who refuses to identify herself but who coolly gives him orders that he'd better not disobey; the first time he does so, he lands in hot water with FBI Agent Morgan (Billy Bob Thornton), even though he's done nothing to break the law.

Meanwhile, elsewhere in Chicago, harried single mom Rachel (Michelle Monaghan) is about to pack her young son off on a trip -- his school band is going to Washington to play for the president. But before long, she begins receiving weird cellphone calls too, from the same smooth, disembodied female voice that Jerry has been contending with. The voice tells Rachel that her son will be killed if she doesn't follow orders. Rachel complies, and eventually she and Jerry are thrown together to suffer numerous hardships, including being locked away in a container in an airplane's cargo hold. At one point they're also ordered to go to Macy's and buy themselves some new clothes with the credit cards that will be provided for them at the customer-service desk. Nice work if you can get it.

Just who is this bossy lady, and what does she want from Rachel and Jerry? "Eagle Eye" spends close to two hours leading us to some understanding of what, exactly, is going on, and there are tantalizing scraps of cleverness along the way. The director, D.J. Caruso ("Disturbia," "Taking Lives," "The Salton Sea"), working from a screenplay by Dan McDermott, John Glenn, Travis Adam Wright and Hillary Seitz, weaves a tale designed to incite paranoia and anxiety. In "Eagle Eye," the government can track our every move, gleaning intimate details about us from surveillance cameras, from our Web-surfing habits, and from our cellphones (even when they're turned off). In the "Eagle Eye" universe, the information that's being gathered is intended to protect us from terrorist attacks. At one point I jotted down in my notebook something about how the mechanisms designed to protect our freedom are also the very things that endanger it -- and sure enough, at the end of the movie a character intones, with affected self-importance, a sentence saying pretty much the same thing. This is a message movie that starts trumpeting its intent early on, loud and clear.

Still, I kept wondering how Caruso was going to tie the whole thing together. The big problem is that he takes far too long to get to his very obvious point. "Eagle Eye" is one of those movies with a pre-climax, a climax, and a for-real final climax (the last of which borrows elements from "The Man Who Knew Too Much"). Caruso could have made the movie more effective with a little streamlining. What's more, he wastes some of his best actors: The movie could use more of Thornton's dry, easygoing drawl, and Rosario Dawson has a completely thankless role as some Air Force chick -- the character is so ill-defined that it's not really clear what her job is.

But at the very least, "Eagle Eye" gives us two principals who are appealing enough to keep us interested in them: LaBeouf shambles through the movie with an endearingly lost quality -- his savoir faire is of the hangdog kind, but it pretty much works. And Monaghan, with that upturned nose and those mischievous eyes, always looks like a woman in search of trouble. In "Eagle Eye," trouble finds her, and she does her damnedest to stand up to that creepy lady on the cellphone. By the time we learn who "she" is, we've gotten the message that in American government, boys are no longer necessarily the voice of authority. Big Sister is watching you. And when she tells you to get your fanny over to Macy's, you'd better go.