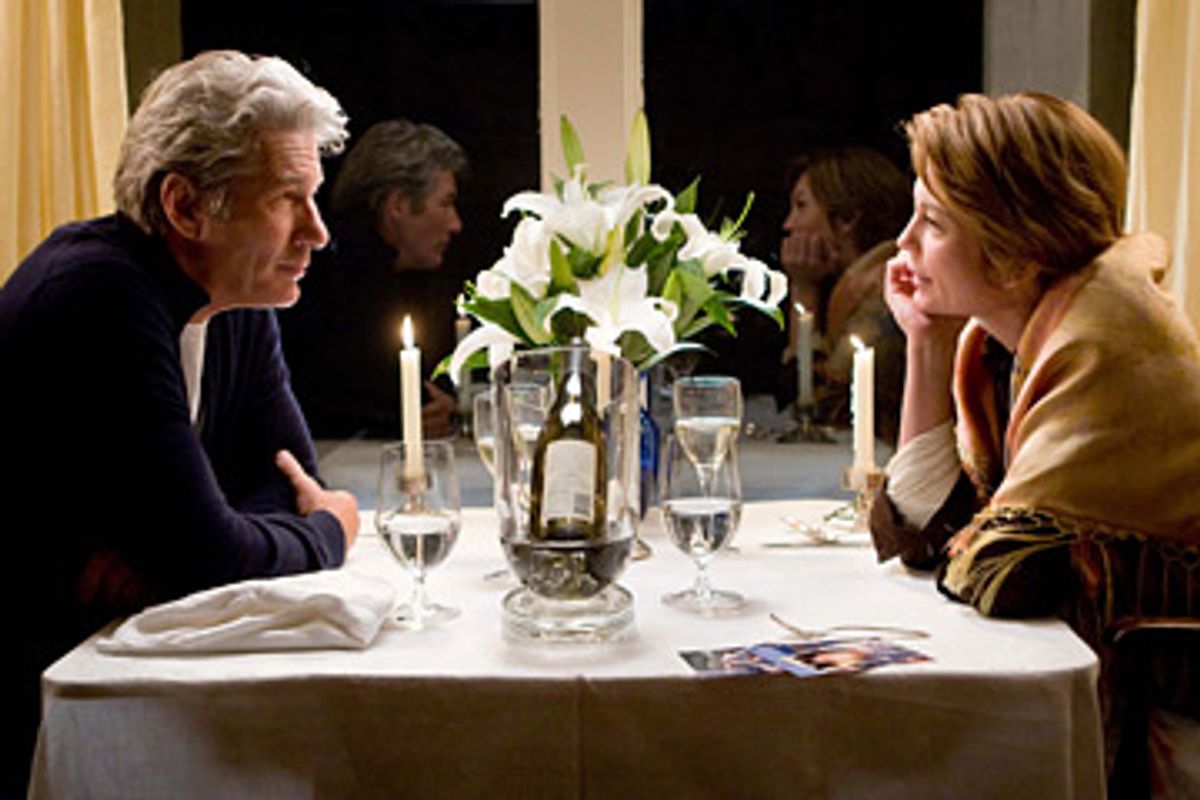 It's easy to make fun of "Nights in Rodanthe," a romantic melodrama based on the novel by megawatt best-selling author Nicholas Sparks. The feature-film debut of theater director George C. Wolfe, "Nights" is so florid that it almost comes off as stylized, but its aggressive outlandishness is purely unintentional. Wolfe and his screenwriters, Ann Peacock and John Romano, have tried to give us a satisfying, old-fashioned romantic weeper; what they've come up with is a contrivance that feels like a million things we've seen before, only not as accomplished or as efficient as any of them. In a flashback sequence, Dr. Paul Flanner (Richard Gere), a surgeon who's fallen from grace both professionally and personally, shouts out to everyone within earshot "We're doctors! We can't control everything all the time!" The moment, and the line of dialogue it encases, like a weird jewel, is so overwrought, it could be a gag from a "Saturday Night Live" routine about the excessive pomposity of the medical profession.

But all the ways in which "Nights in Rodanthe" is "bad" only enhance the painful truth about how much is missing from the movies these days -- and the fact that romantic melodramas barely ever get made anymore. The conventional wisdom, which is at least semi-provable if you look at the major big-studio releases over the past few years, is that the bulk of movies are designed to attract an audience of 18- to 30-year-old males, with the occasional Kate Hudson romantic comedy thrown in for the womenfolk. Bringing up the rear -- a rear toned by lots of Pilates and yoga -- are movies like Diane English's "The Women," designed to appeal to women over 40 and featuring a cast of actresses who are afraid to look a day over 40 themselves.

Maybe that's why it hurts to laugh at "Nights in Rodanthe." Because as inept as the picture is, in so many ways, it's trying very hard to deliver certain movie pleasures that have been virtually forgotten in the past 10 or maybe even 20 years. Who makes romantic melodramas anymore? Let alone ones featuring middle-aged actors? Wolfe is in over his head here, and he treads water far too cautiously. Every shot is safe and conventional to the point of being tired; he can't distinguish between schmaltz and sentiment; and the dialogue he's saddled his actors with is so dimwitted I wouldn't wish it even on community-theater amateurs. But what the actors do with that dialogue -- and what their faces say even when there's no talking -- means everything. Diane Lane plays Adrienne Willis, a devoted mother of two who suddenly finds herself faced with the chance to repair her broken marriage, a marriage she isn't sure she wants to fix. As a favor to her best friend, Jean (the always terrific Viola Davis), she's agreed to keep an eye on a gorgeously ramshackle inn, along North Carolina's Outer Banks, for a weekend. It's off-season, and a major storm may be on the way, but Jean has kept the inn open for a solitary guest: Dr. Flanner, who needs to be in the area to tend to a bit of business that's crucial to his livelihood, and maybe even to his soul.

We know what's going to happen, of course, the minute Gere sets foot in that inn. At first he doesn't seem like much of a romantic prize: His eyes dart about nervously, and he leaves his sentences hanging, half-finished, as if none of this thoughts are worth completing. Clearly, there's something on his mind, and before long, Adrienne, with her sunny but guarded smile, will find out what it is. She'll also learn -- even if the movie takes too long to get to this point -- that her life can't be ruled by her children, particularly her tyrant teenage daughter, Amanda (Mae Whitman), who does nothing but pout and jeer in the face of her mother's relentless, loving self-sacrifice.

This is the third time Gere and Lane have appeared together (after "The Cotton Club" and "Unfaithful"), and they make an easygoing, comfortably rumpled match. Their repartee isn't spiky; there's not much parrying and few wisecracks. In "Nights in Rodanthe," each character has a job to do -- to locate the deepest suffering in the other and find the best way to soothe it -- and Gere and Lane rise to that challenge, without making it look like work. Gere and Lane look like real people -- admittedly, like movie-star versions of real people. But their glamour doesn't take precedence over their most deeply human qualities; they're not just celebrities, they're actors, a distinction that's getting harder and harder to make. Gere, an actor I never cared for in the '80s (his bland, pretty face kept too much to itself and didn't give enough to the camera), has become a seasoned, relaxed presence who's always pleasurable to watch. And Lane is one of those rare actresses who isn't afraid to show a character's consternation or concentration. When an actress is too hung up on vanity, she doesn't ever want to look like she's thinking: That means conjuring unflattering forehead lines. (I'm haunted, and not in the good way, by the image of Nicole Kidman doing her damnedest to frown, and nearly failing, in "Margot at the Wedding.") Lane always does whatever it takes to play the character at hand, and she's never afraid to let us see those characters think.

In "Nights in Rodanthe," Adrienne works out her problems the way most of us do: by thinking them out, puzzling over them, spending time figuring out how to do what's right. OK, she also falls in love with a handsome, if damaged, doctor, but she deserves whatever happiness might ultimately come her way. The movie around Lane and Gere is unreal, a tortured construct, but they open a breathing space in its center. You can snort at every forced, overcooked line in "Nights in Rodanthe," and lord knows there are plenty of them. But I wouldn't trust anyone who could laugh at those faces -- the faces of actors doing their job, defying gravity by refusing to be ruled by it.