Who is the real John McCain?

From David Foster Wallace to Paul Begala, four authors trace the politician's journey from the liberal's conservative to flip-flopping hack. 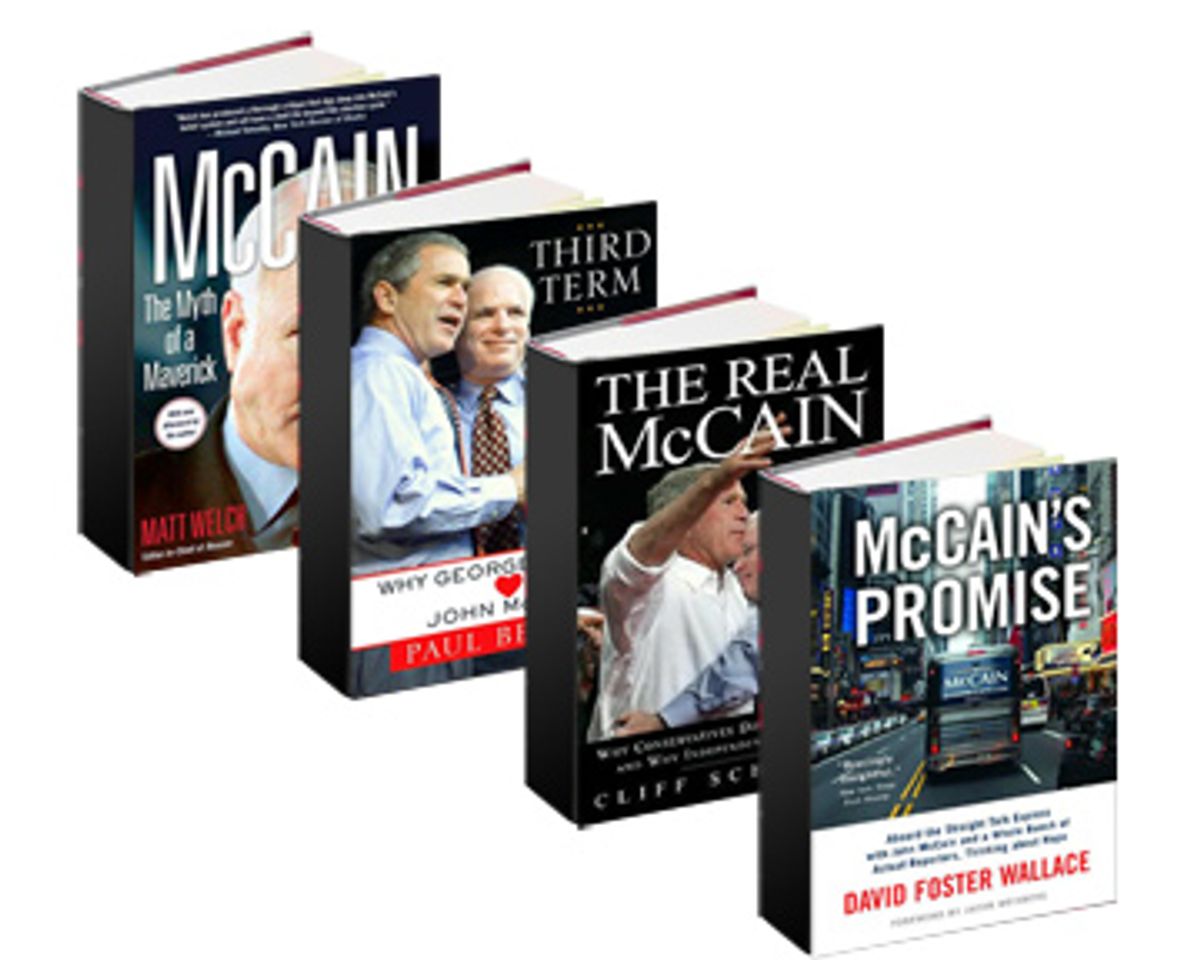 Twenty or 30 years from now, John McCain will occupy the same historical niche as John Kerry, Bob Dole, Michael Dukakis and Wendell Willkie, in my opinion: a decent guy who never made it to the White House.

McCain has run for the presidency twice, as two completely different candidates. His campaigns and his image have been shaped by the nasty partisanship of the late 20th and early 21st century, an era that may be remembered as the Late Culture Wars. McCain has never seemed comfortable with that style of politics. Despite his identification as a conservative, he's been willing to reach across the aisle to work with Democrats who shared his concept of reform. In 2000, McCain tried to be a liberal's conservative, holding stream-of-consciousness press conferences on his bus, bashing right-wing preachers as "agents of intolerance" and opposing repeal of Roe v. Wade. Republicans were unimpressed, so when McCain finally won their nomination, he picked as his running mate a woman who had less than two years' experience as a governor -- a woman young enough to be his daughter, or his third wife, even -- but who belongs to a Pentecostal church, baits the Washington media and wouldn't allow any woman to have an abortion.

McCain, who built his image on bipartisanship, is now finding he can only rally Republicans by campaigning as a Deep Red partisan. That conflict -- between his sense of self and the role he's playing to win the election -- may account for the fact that he's been melting down like HAL 9000 lately. The old McCain would never have threatened to cancel a debate, or run an ad comparing his opponent to Britney Spears. But the old McCain never won the Republican nomination.

When scholars of the Obama presidency try to answer the question "Who Was John McCain?" -- or, more pointedly, "Who Were the Two John McCains?" -- they should start by reading what journalists had to say about him. Four new books about McCain, by four liberal authors, show how difficult it's been for a politician with middle-of-the-road instincts to operate in a polarized era. Writers loved McCain during his first run for the presidency, in 2000. But eight years later, they think he's a flip-flopping hack.

Consider "McCain's Promise: Aboard the Straight Talk Express With John McCain and a Whole Bunch of Actual Reporters, Thinking About Hope," by David Foster Wallace -- effectively the last book Wallace published, though it's actually the unedited version of an article that appeared in Rolling Stone. During the 2000 Republican primaries, Wallace spent a week aboard McCain's campaign bus, which was nicknamed the "Straight Talk Express" because the candidate loved to hold bull sessions with reporters in an on-board press lounge.

Wallace didn't get much straight talk -- as a writer for a magazine with an un-Republican readership, he was exiled to a trailing vehicle known as "Bullshit #1," where he spent most of his time hanging out with the TV cameramen. A McCain staffer nearly faked a seizure to avoid giving him an interview. Still, his book is worth reading because it provides context for the press's eventual disenchantment with McCain.

In 2000, McCain was, as Wallace points out, an "anticandidate" whose campaign seemed like an ironic riff on politics. Used to stuffy, humorless politicians, reporters were thrilled to hang out with a guy who campaigned with an edge of self-mockery. A hotshot Navy pilot, no less. "He's witty, and smart, and he'll make fun of himself and his wife and staff and other pols and the Trail, and he'll tease the press and give them shit in a way they don't ever mind because it's the sort of shit that makes you feel that here's this very cool, important guy who's noticing you and liking you enough to give you shit," Wallace wrote.

McCain and his journalistic entourage also had a common enemy: the Republican Establishment, personified by George W. Bush. It felt ennobling to travel with a candidate who whaled on Jerry Falwell, and whose underfunded campaign checked in every night at the Marriott. A lot has changed in eight years: By 2008, McCain had given a speech at Jerry Falwell's Liberty University, had promised not to repeal Bush's tax cuts, had declared his opposition to Roe v. Wade, and was staunchly defending the war in Iraq. The anti-politician had learned that stiffing the Republican base was no way to win the party's nomination.

In his first run, McCain campaigned as a reformer who could win over independents. That was before anyone had heard the terms "red state" and "blue state." In 2008, there is no middle ground. There is a liberal America and a conservative America, each unable to acknowledge that the other side is intelligent, honorable or possessed of a reasonable opinion. To win his party's nomination, McCain had to campaign under the team colors. The man who had sworn he would never compromise his principles to win an election, had become ... a politician. That transformation helped McCain with Republican voters, but not reporters. Wait a minute, they seemed to say, we thought you were one of us. But you're nothing more than a, a ... conservative!

To sell books to this polarized public, McCain's critics must be equally partisan. It's not enough for them to disagree with his politics. Since he's on the other side of the divide, they have to attack his character as well. And they do, as eagerly as David Freddoso bit into Obama in "The Case Against Barack Obama."

Liberal journalist Cliff Schecter donated $20 to McCain in 2000 because "I thought he held informed, principled positions high above the fray of partisan politics." This year, Schecter published a broadside titled "The Real McCain: Why Conservatives Don't Trust Him -- and Why Independents Shouldn't." Schecter divides McCain's career into three phases: McCain 1.0 was a Reaganite conservative. McCain 2.0 was the man known as Maverick. McCain 3.0 sucked up to Bush. To Schecter, Version 2 was the phony. McCain, he argued, adopted the maverick persona to beat a primary field full of conservative candidates, and to win over gullible journalists, like Schecter.

With his eyes now opened, Schecter saw the similarities between McCain 1.0, who jetted to the Bahamas at Savings & Loan fraudster Charles Keating's expense, and McCain 3.0, who hired lobbyists to run his 2008 presidential campaign.

"Another issue where one McCain has run up against another is taxes," Schecter writes. "When running for president in 2000, McCain claimed that candidate Bush's plan was skewed toward the wealthy. After the campaign, he and Lincoln Chafee were the only Republican senators to oppose President Bush's signature tax package in 2001." But when McCain began planning another White House run, "he jumped enthusiastically on the tax-cut bandwagon, voting in 2006 to extend portions of the Bush tax cut. If those tax cuts aren't made permanent, he said, it would be the equivalent of a tax increase, and 'I've never voted for a tax increase in 24 years' ... Granted, he's no Mike Huckabee, who would abolish the IRS altogether. But he's not the John McCain we knew in 2001." Campaign books have a short shelf life, but I hope Schecter gets his $20 donation back in royalties.

Something else has changed over the last eight years: A lot of Americans really, really, really hate George W. Bush. When Bush's head pops up on the TV screen, Democrats shout and swear and froth as though they're taking part in the Two-Minute Hate from "1984." Paul Begala has made a career out of hating Bush, and he isn't ready to let it go just because his nemesis is leaving office. Begala, a former aide to President Clinton, co-hosted CNN's "Crossfire," on which he played a cross between a debate team captain and a wrestler, defending, at high volume, everything on the Democratic platform. "Crossfire" was canceled in 2005, and the Bush administration is scheduled to be canceled in early 2009, but Begala has continued the crusade with a book titled "Third Term: Why George W. Bush (Hearts) John McCain," which presented McCain as the political reincarnation of Bush.

If you want to steep yourself in the bitterness and shallowness of political discourse circa 2008, "Third Term" is your book. Begala sees everything in red and blue. Except for a few lines praising McCain's service in the Vietnam War (while comparing it unfavorably to Bush's draft dodging), Begala depicts the senator as a corrupt, ill-tempered saber-rattler, determined to continue Bush's policies. The book is full of poorly photoshopped movie stills, pasting Bush's and McCain's faces onto the cowboys from "Brokeback Mountain," and the spaghetti-slurping dogs in "Lady and the Tramp." Scholars say newspapers are written on a sixth-grade level. "Third Term" certainly is, because its taunting message is that Bush and McCain love each other so much, they should be boyfriends. A McCain administration would be so gay! It's almost not worth mentioning any facts from the book, because Begala obviously cut-and-pasted it on his computer while toggling back and forth between Microsoft Word and a Google search page titled "Bush + McCain." But here's an example: "Under the Bush-McCain economic policies, the American economy has created a little over five million jobs. By contrast, the Clinton-Democratic policies brought twenty-three million new jobs." Ergo, not only will McCain continue Bush's policies, he shares responsibility for all those policies' failures over the last eight years.

Matt Welch's recent book "McCain: The Myth of a Maverick" is better-researched, and more evenhanded. It is particularly strong on how McCain's military background made him a rebel. In that regimented society, breaking petty rules and challenging superiors is a sign of esprit. There's also a fascinating discussion of McCain's favorite book, "For Whom the Bell Tolls." McCain discovered Hemingway in his father's library when he was a 12-year-old, looking for a heavy volume to press a four-leaf clover. Instead, he found a literary hero: Robert Jordan, who defies the orders of a cautious commander by blowing up a bridge, at the risk of his own life. But Welch, too, attacks McCain's personality. He devotes an entire chapter to calling McCain an elitist who prefers big-money fundraisers to mingling with little people who have nothing to offer but votes. He's a politician, man! When was the last time Barack Obama flew coach?

John McCain has never been as good as the media portrayed him in 2000, or as bad as he's being portrayed in 2008. One thing he is bad at: keeping in step with the nation's mood. On his first try at the presidency, McCain ran as a moderate, when Republicans wanted a conservative. Had he been nominated, he probably would have fulfilled his promise to beat Al Gore "like a drum." That would have spared the country the Florida recount and the Bush presidency. On his second try, he's running as a conservative, when the country is sick of that philosophy.

So what will be the answer to "Who was John McCain?" That more than once, he was the right man at the wrong time.