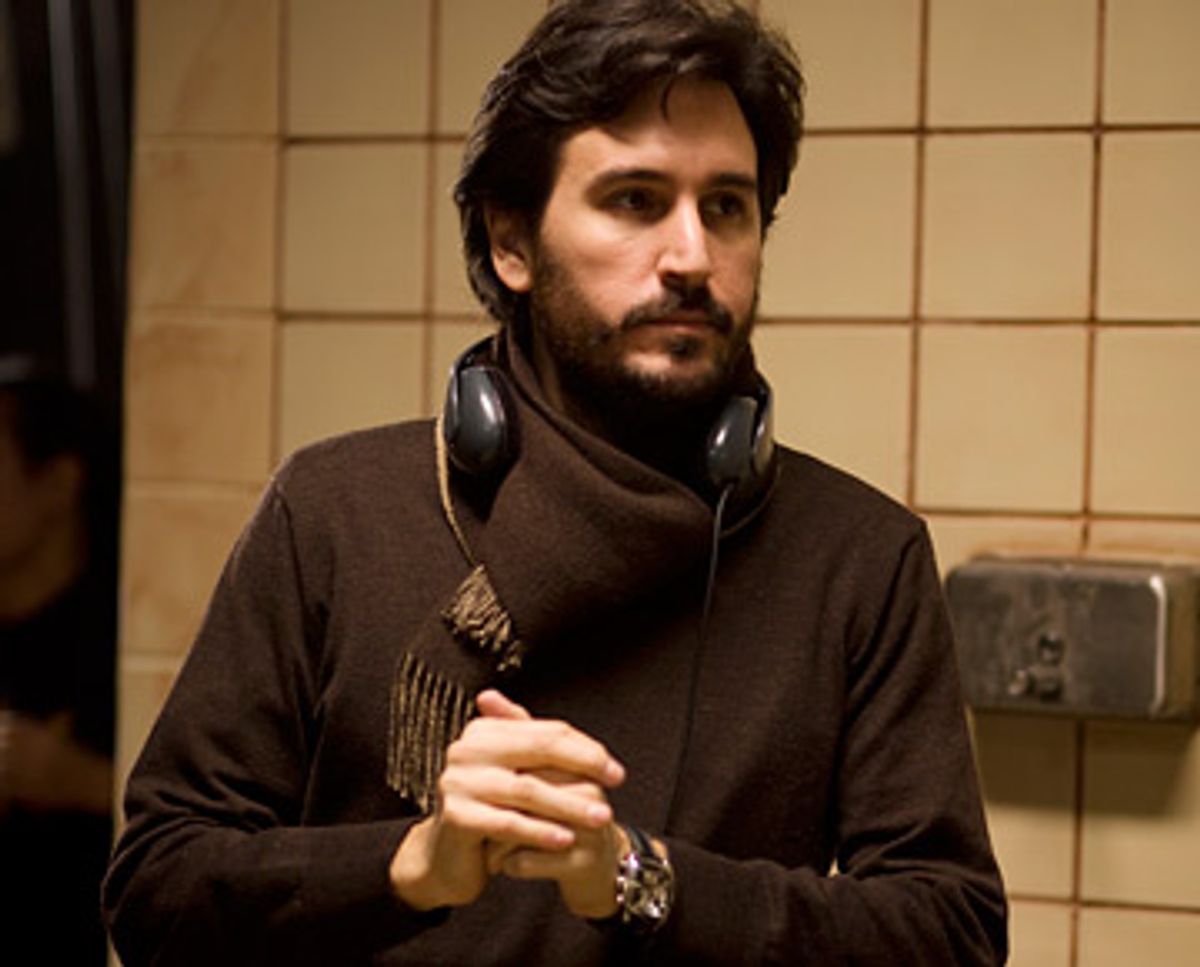 Peter Sollett's second feature, the romantic comedy "Nick and Norah's Infinite Playlist," is a little like his first movie, the beautifully direct "Raising Victor Vargas," in that both feature young urbanites -- or wannabe urbanites -- looking for love and hoping it can be found somewhere on the streets of New York. Sollett had a bigger budget for "Nick and Norah's Infinite Playlist" -- which is based on the young-adult novel by Rachel Cohn and David Levithan and hits theaters this week -- and the movie features a sort-of star, Michael Cera. But the picture still manages to be low-key and intimate, and also features a killer playlist itself: The music Sollett chose ranges from contemporary indie faves like Vampire Weekend, Band of Horses and We Are Scientists to more obscure artists like the late Chris Bell, of the beloved Memphis band "Big Star," who, before his death in 1978, left behind a small, eerie, deeply touching body of work. (The movie also happens to feature a song by one of my personal favorites, English balladeer Richard Hawley.)

The Nick and Norah of the movie's title are played by Cera and Kat Dennings (who recently appeared in "The House Bunny," and also played Catherine Keener's teenage daughter, Marla, in "The 40-Year-Old Virgin"), as two New Jersey kids who wander the streets of New York -- mostly in Nick's car, a yellow Yugo -- looking for the location of a secret show by one of their favorite bands, a (fictional) group called Where's Fluffy. This is a road movie that takes place mostly in New York and, as in most road movies, the journey matters more than the destination. Sollett, 32, a New Yorker himself, features a lot of New York exteriors, like Katz's Deli and the Mercury Lounge, on the Lower East Side, as well as the East Village pirogi palace Veselka. But maybe the movie is even better at capturing a state of being than a sense of place: "Nick and Norah's Infinite Playlist" captures the feeling of what it's like to be young and wandering around the streets of Anytown, looking for something to do and not having a whole lot of money with which to do it.

I spoke with Sollett in Toronto last month about what attracts him to these stories of urban (or even bridge-and-tunnel) kids looking for love, and about what it's like to work with young actors -- particularly when you've never worked with grown-up ones. (Listen to the interview here.)

This is the second movie you've made about young people finding their way to each other, inside the larger context of New York City. What is it about this kind of subject that attracts you?

I like love. And that's a great way to talk about it. "Vargas" was really an extension of the actors in [the movie]. It was very much about their experience. This was a little bit different because the experience of the characters in this film was a lot more like my own. I had a bridge-and-tunnel experience. I grew up in Brooklyn and then in Staten Island.

When I was 20, I met a girl in Manhattan -- I was going to NYU at the time. I was living in Staten Island; she was living in Manhattan. I would commute in every night to spend the evening with her but didn't have a place to stay. So I would sort of stay until 2, 3, 4, 5 and then go home and go to work the next day. So I just really identified with what these characters were experiencing.

And ["Nick and Norah"] is less about coming of age within a family. This one, to me, is about finding the courage to expose your true self to someone, and the reward you can gain by doing that.

And also about finding a personal space for yourself within the larger context of the city. This movie has a feel for the city, with all the locations you used, like Veselka and Katz's and clubs like Mercury Lounge and Arlene Grocery. Do those places have personal resonance for you?

I've seen those bands in those clubs. I didn't write this movie, but there's an awful lot of autobiography in it, too.

How much of the music represented your own personal choices? I almost leapt out of my seat because you used a Richard Hawley song, and not many people know about him.

These are all right out of my iTunes, basically. A lot of the credit on the music should go to Myron Kerstein, the editor, who also did "Garden State" and "Vargas." He's great with music. And then there's Linda Cohen, the music supervisor. Basically, what I did was I sent Kerstein music that I thought would work for the scenes -- probably five or 10 times too many songs for each scene. And while we were shooting in New York, he was in L.A. assembling the movie and trying these songs on. They were all five-star tracks on my iTunes that seemed to relate to the movie.

Also, this movie is very low-key. Movies today are just getting bigger and noisier. There's a lot of grabbing for the audience's attention. I like the stillness of this picture -- it has a very relaxed feel. There's no shaky hand-held camera, no fast cutting. So many young filmmakers use a lot of fast cutting to try to make things more energetic, but it often drains the energy away from a sequence.

We're lucky because we really had the goods with the movie, with Michael and with Kat and the scenes they had together. I thought we had the real thing. All that stuff you're talking about is really useful when you don't. It's a way of stimulating the audience without stimulating their emotions, in lots of cases. And I guess I just didn't want to do that kind of movie.

I was also trying to be true to that kind of experience. In the middle of the night, it's often really still and it can get really quiet. It can get very romantic, you know?

You also have a knack for working with young actors. Can you talk about working with people like Michael Cera and Kat Dennings?

I don't know what it's like not to work with young actors, because I haven't worked with any adult actors. That said, Michael and Kat and a lot of young actors are very exciting to work with, because it feels like everything they make is new. Because as they're evolving as people, their ability as actors is evolving. And you have a sense of what they're capable of, but you're very likely to be surprised, too.

My producer, Kerry Kohansky, suggested Michael for the movie. It was before "Superbad" and before "Juno." So really the only way to see him act was on "Arrested Development," and on that show he was a child. And this guy, Nick, is not a child -- he's more adult than child.

While we were making the movie, "Superbad" came out, and then "Juno" came out. And then all of a sudden people had an expectation of what Michael would do and how he does things.

It was very interesting to be shooting the movie and having a sense of what people were expecting and seeing how much more he had to offer. Because what he's not in those movies is romantic. "Romantic" is a grown-up thing.

The movie is a comedy, and the first four reels are, for the most part, broad comedy, and we sneak -- I hope -- a lot of emotion in the last reel. And he and Kat just really excel at that. It's exciting to see people do things that they haven't had the opportunity to do before, and to see them do it well. That's a really cool thing.

Is Michael Cera that deadpan in real life?

No, he's not. He's not as tense in real life as he is in the movies.

That's what's so charming about the character. At the beginning, he's so in love with this other girl, played by Alexis Dziena, who's so sexy and calculating. She's a lot more advanced than he is. He just can't keep up with her, but he really wants to.

His priorities are out of order, and he gets them into order. When we meet Mike's character, what he's chasing is somebody who looks the way society tells young women they should look. They should pour their energy into their image. Nick is chasing this girl who's like a girl out of a magazine, thinking that he's never going to get over her. And then he meets somebody who has a great deal of substance and who is very beautiful -- not necessarily out of the pages of a magazine, but more beautiful because she's not. It's an easy journey to get behind.