Everyone seems to be oozing sympathy for the fumbling vice-presidential nominee. Please. Cry me a freaking river. 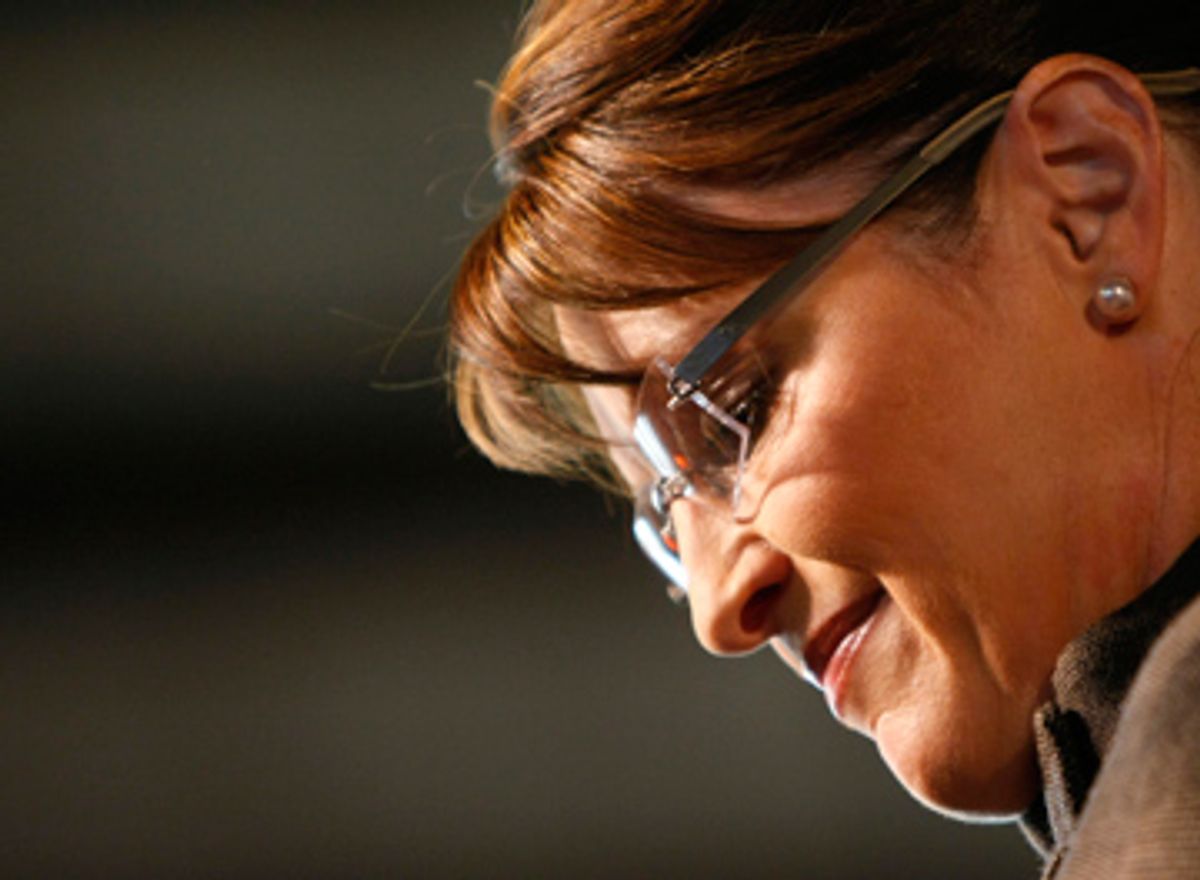 Is this the week that Democrats and Republicans join hands -- to heap pity on poor Sarah Palin?

At the moment, all signs point to yes, as some strange bedfellows reveal that they have been feeling sorry for the vice-presidential candidate ever since she stopped speaking without the help of a teleprompter. Conservative women like Kathleen Parker and Kathryn Jean Lopez are shuddering with sympathy as they realize that the candidate who thrilled them, just weeks ago, is not in shape for the big game. They're not alone. The New Republic's Christopher Orr feels that Palin has been misused by the team that tapped her. In the New York Times, Judith Warner feels for Sarah, too! And over at the Atlantic, Ta-Nehisi Coates empathizes with intelligence and nuance, making clear that he's not expressing pity. Salon's own Glenn Greenwald watched the Katie Couric interview and "actually felt sorry for Sarah Palin." Even Amy Poehler, impersonating Katie Couric on last week's "Saturday Night Live," makes the joke that Palin's cornered-animal ineptitude makes her "increasingly adorable."

I guess I'm one cold dame, because while Palin provokes many unpleasant emotions in me, I just can't seem to summon pity, affection or remorse.

Don't get me wrong, I'm just like all of the rest of you, part of the bipartisan jumble of viewers that keeps one hand poised above the mute button and the other over my eyes during Palin's disastrous interviews. Like everyone else, I can barely take the waves of embarrassment that come with watching someone do something so badly. Roseanne Barr singing the national anthem, Sofia Coppola acting in "The Godfather: Part III," Sarah Palin talking about Russia -- they all create the same level of eyeball-squinching discomfort.

But just because I'm human, just because I can feel, just because I did say this weekend that I "almost feel sorry for her" doesn't mean, when I consider the situation rationally, that I do. Yes, as a feminist, it sucks -- hard -- to watch a woman, no matter how much I hate her politics, unable to answer questions about her running mate during a television interview. And perhaps it's because this experience pains me so much that I feel not sympathy but biting anger. At her, at John McCain, at the misogynistic political mash that has been made of what was otherwise a groundbreaking year for women in presidential politics.

In her "Poor Sarah" column, Warner writes of the wave of "self-recognition and sympathy [that] washed over" her when she saw a photo of Palin talking to Henry Kissinger. Palin -- as "a woman fully aware that she was out of her league, scared out of her wits, hanging on for dear life" -- apparently reminded Warner of herself. Wow. Putting aside the massively depressing implication that Warner recognizes this attitude because she believes it to be somehow written into the female condition, let's consider that there are any number of women who could have been John McCain's running mate -- from Olympia Snowe to Christine Todd Whitman to Kay Bailey Hutchison to Elizabeth Dole to Condoleezza Rice -- who would not have provoked this reaction. Democrats might well have been repulsed and infuriated by these women's policy positions. But we would not have been sitting around worrying about how scared they looked.

In her piece, Warner diagnoses Palin with a case of "Impostor Syndrome," positing that admirers who watched her sitting across from world leaders at the U.N. last week were recognizing that "she can't possibly do it all -- the kids, the special-needs baby, the big job, the big conversations with foreign leaders. And neither could they." Seriously? Do we have to drag out a list of women who miraculously have found a way to manage to balance many of these factors -- Hillary Clinton? Nancy Pelosi? Michelle Bachelet? -- and could still explain the Bush Doctrine without breaking into hives? This is not breaking my heart. It is breaking my spirit.

The Atlantic's Coates takes a far smarter, but ultimately still too gentle, approach to Palin in his blog. He writes, compassionately, "There are a lot of us lefties who are guffawing right now and are happy to see Palin seemingly stumbling drunkenly from occasional interview to occasional interview." Coates asserts that McCain "[tossed] her to the wolves" and notes that while she surely had some agency in this whole mess, "where I am from the elders protect you, and pull you back when you've gone too far, when your head has gotten too big."

Where I come from, a woman -- and especially a woman governor with executive experience -- doesn't have to rely on any elder or any man to protect her and pull her ass out of the fire. She can make a decision all on her own. (Palin was more than happy to tell Charlie Gibson that she made her decision to join the McCain ticket without blinking.) I agree with Coates that the McCain camp was craven, sexist and disrespectful in its choice of Palin, but I don't agree that the Alaska governor was a passive victim of their Machiavellian plotting. A very successful woman, Palin has the wherewithal to move forward consciously. What she did was move forward thoughtlessly and overconfidently, without considering that her abilities or qualifications would ever be questioned.

Christopher Orr writes sympathetically about the scenario that Palin may have envisioned, in which she tours the country on the wave of adoration that buoyed her out of St. Paul and through a post-convention victory lap. In his mind, she might well have continued to give winning, grinning interviews, charming the pants off regular folks all across the country, if the accursed McCain campaign hadn't nervously locked her in a no-press-allowed tower. Orr compares Palin to a talented athlete who, as a result of being over-coached, doesn't soar to new physical heights but instead gets "broken down, [loses] confidence in his game, [becomes] tentative, second guessing himself even to the point of paralysis."

Surely if Palin's political muscles were as taut and supple as Orr suspects, the campaign would not have been so quick to put her on a special training regimen.

It was so predictable that we would get to a pity-poor-helpless-Sarah phase. The press was already warming up for it on the day McCain announced her as his running mate, when NBC reporter Andrea Mitchell speculated that McCain's choice was designed to declaw scrappy Joe Biden, whose aggressive style would come off as bullying next to the sweet hockey mom from Alaska. Now, of course, we know about the hockey moms and the pit bulls; the more-powerful-than-expected Palin juggernaut forestalled the pity/victim/mean boy/poor Sarah phase.

So here it is, finally. And as unpleasant as it may be to watch the humiliation of a woman who waltzed into a spotlight too strong to withstand, I flat out refuse to be manipulated into another stage of gendered regress -- back to the pre-Pelosi, pre-Hillary days when girls couldn't stand the heat and so were shooed back to the kitchen.

Sarah Palin is no wilting flower. She is a politician who took the national stage and sneered at the work of community activists. She boldly tries to pass off incuriosity and lassitude as regular-people qualities, thereby doing a disservice to all those Americans who also work two jobs and do not come from families that hand out passports and backpacking trips, yet still manage to pick up a paper and read about their government and seek out experience and knowledge.

When you stage a train wreck of this magnitude -- trying to pass one underqualified chick off as another highly qualified chick with the lame hope that no one will notice -- well, then, I don't feel bad for you.

When you treat women as your toys, as gullible and insensate pawns in your Big Fat Presidential Bid -- or in Palin's case, in your Big Fat Chance to Be the First Woman Vice President Thanks to All the Cracks Hillary Put in the Ceiling -- I don't feel bad for you.

When you don't take your own career and reputation seriously enough to pause before striding onto a national stage and lying about your record of opposing a Bridge to Nowhere or using your special-needs child to garner the support of Americans in need of healthcare reform you don't support, I don't feel bad for you.

When you don't have enough regard for your country or its politics to cram effectively for the test -- a test that helps determine whether or not you get to run that country and participate in its politics -- I don't feel bad for you.

When your project is reliant on gaining the support of women whose reproductive rights you would limit, whose access to birth control and sex education you would curtail, whose healthcare options you would decrease, whose civil liberties you would take away and whose children and husbands and brothers (and sisters and daughters and friends) you would send to war in Iraq, Iran, Pakistan, Russia and wherever else you saw fit without actually understanding international relations, I don't feel bad for you.

I don't want to be played by the girl-strings anymore. Shaking our heads and wringing our hands in sympathy with Sarah Palin is a disservice to every woman who has ever been unfairly dismissed based on her gender, because this is an utterly fair dismissal, based on an utter lack of ability and readiness. It's a disservice to minority populations of every stripe whose place in the political spectrum has been unfairly spotlighted as mere tokenism; it is a disservice to women throughout this country who have gone from watching a woman who -- love her or hate her -- was able to show us what female leadership could look like to squirming in front of their televisions as they watch the woman sent to replace her struggle to string a complete sentence together.

In fact, the only people I feel sorry for are Americans who invested in a hopeful, progressive vision of female leadership, but who are now stuck watching, verbatim, a "Saturday Night Live" skit.

Palin is tough as nails. She will bite the head off a moose and move on. So, no, I don't feel sorry for her. I feel sorry for women who have to live with what she and her running mate have wrought.