Why has it been so long since a black band ruled rock?

With their passionate new album, "Dear Science," TV on the Radio stake their claim as a great American rock band. 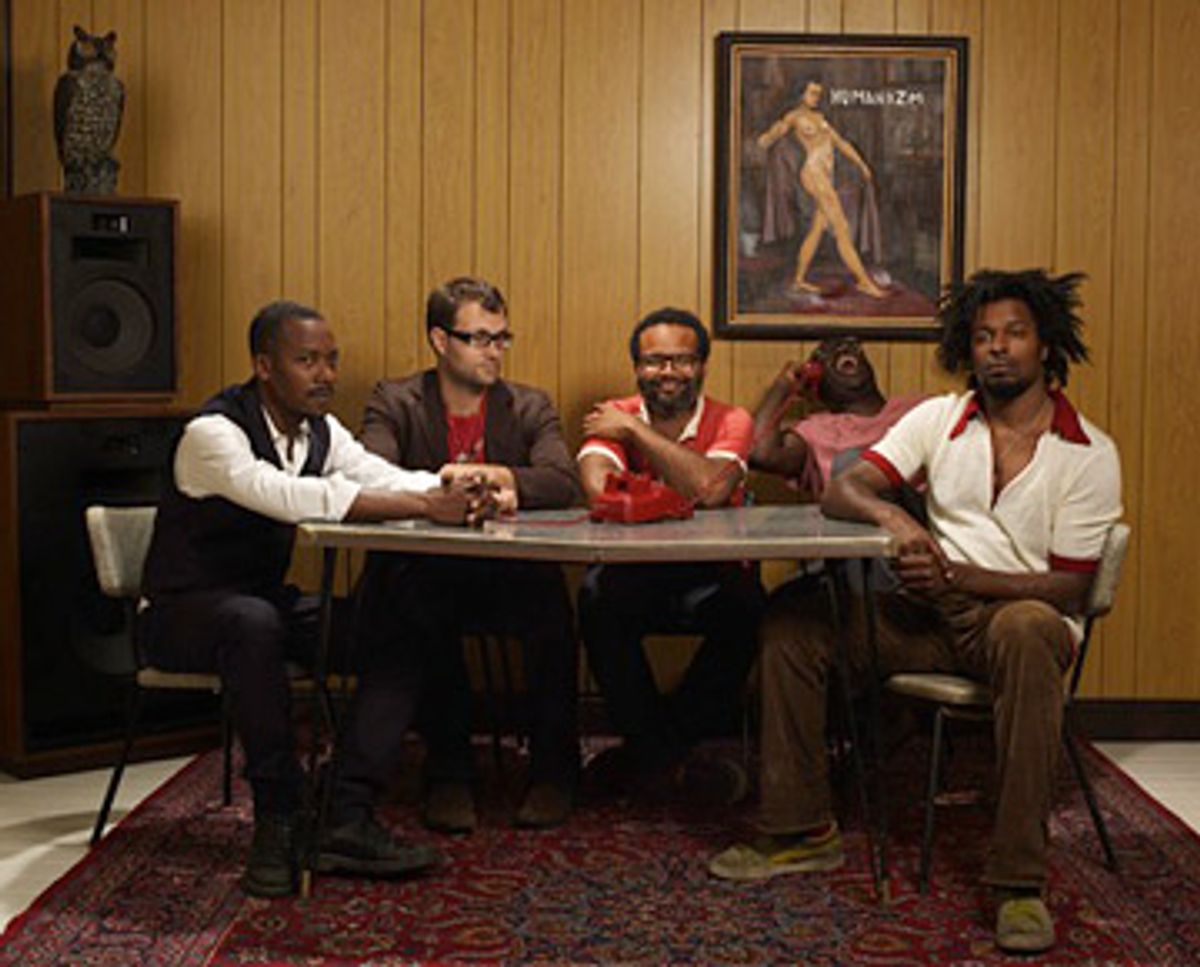 Let's refresh our collective memory: Black Americans invented rock 'n' roll. So it's frustrating to contemplate the nearly total segregation among bands who have played rock music since the early '70s. OK, there have been some flies in the buttermilk here and there. Some of those flies have been as large as Prince, who endured hostility from rock fans who threw chicken parts at him when he opened for the Rolling Stones in 1981. With the help of his mixed-race band, the Revolution, he crossed over into the promised land with "1999" and "Purple Rain."

The Revolution may have been televised (on MTV), but they did not cause a surge in the number of respected black rock bands out there. That very short list included hardcore punk trailblazers Bad Brains and Vernon Reid's group Living Colour, the flagship act of the Black Rock Coalition, which also nurtured Me'shell Ndegeocello and 24-7 Spyz. Bad Brains continue to chug along in a hardcore niche, and while Living Colour created a splash on the charts, they didn't break a lot of new artistic ground compared to forward-thinking black innovators like Sly and the Family Stone and Parliament-Funkadelic. (Living Colour's music was often categorized as funk rather than rock, which may have aided its ghettoization.) Fishbone, the raucous Los Angeles ska band, enjoyed a loyal cult following in the '80s, but never broke out; and we will not even discuss a certain embarrassing New Wave band called the Bus Boys.

The simple, startling fact is that there hasn't been a great mostly black rock band since Sly and Funkadelic -- until TV on the Radio. This Brooklyn, N.Y., group (which began as a duo and expanded into a quintet) has released three albums' worth of stirring, modern and inventive alternative rock, integrating elements as diverse as electronica, guitar atmospherics and doo-wop soul vocals that recall both Peter Gabriel and the Brothers Johnson. Sometimes they sound a little like Prince, too, but only if he were produced by Radiohead.

Their third and latest album, "Dear Science," might make you wonder, Why has it been so long? Despite the foundations laid by Jimi Hendrix and numerous electric blues musicians, hard and heavy rock became pretty much British property as early as 1970, with Led Zeppelin's "Immigrant Song" putting a Viking stamp on the genre. Zep ushered in an age of faux-paganism and power solos, a Celtic world so crammed with fair maidens and elves that there was no room for Negroes. By the '80s, metal was a whites-only section in the arena of rock: Guns n' Roses guitarist Slash never revealed the African roots beneath his curly mop, and who could blame him, with his own bandmate Axl Rose unironically dropping the N-word in "One in a Million."

Metal wasn't the only genre stuck in the Great White North in the '80s. Few other genres of the time demonstrated significant integration until hip-hop merged with pop in the '90s. Despite the progressive politics of punk, new wave, alternative rock, college and indie-rock, these genres remained whitewashed. This wasn't simply a matter of whites excluding blacks -- nearly everybody young and ambitious wanted to rap. Once Public Enemy and others turned black identity and solidarity into the main subject of hip-hop, the majority of black musicians who wanted to be visible, let alone relevant, gravitated to hip-hop.

But enough about history. It's been a long time since any mostly black rock band has produced an album as pleasurable or complex, both thematically and sonically, as TVOTR's third album, "Dear Science." What's funny about this incredible achievement is that the band did it by raising the profile of African and R&B influences in their music. The move doesn't come across as an attempt to "be true to their heritage," but as a masterly use of the African roots of all rock music. This record does what Barack Obama ought to do; mixing Euro-American and African culture naturally and seamlessly, it gets indignant about politics without simplifying its positions, brings its multicultural constituency together, stirs you to action and makes you want to party at the same time. Better still, its catchy grooves and ambitious texture blur the distinctions between sexuality, political passion and the need to dance.

TVOTR had serious Williamsburg, Brooklyn, art-rock cred to overcome, riding into prominence on the coattails of the punkier Yeah Yeah Yeahs, who were in turn indebted to the glammy Strokes. Founding TVOTR member David Sitek (the group's lone Caucasian) produced the Yeah Yeah Yeahs' critical smash, "Fever to Tell," an exhilarating, practically nonverbal skronk full of energy and noisy guitar, but his own band's sound favors antique drum machines and soaring guitars with heavy effects. It's not surprising that their U.K. label is 4AD, an imprint best known for championing eccentric alternative bands like the Pixies, the Cocteau Twins and Throwing Muses. They've managed to sidestep the usual knee-jerk critical opposition to art rock, though -- Spin named their second LP, "Return to Cookie Mountain," 2006's album of the year.

"Dear Science" isn't as much a departure from "Cookie Mountain" and their 2004 debut, "Desperate Youth, Bloodthirsty Babes," as it is a purification of TVOTR'S sound. You can still prominently hear the wide range of influences that made those first records so extraordinary.

Lead singer Tunde Adebimpe's aggressive falsetto leads the charge on "Dear Science," with a kinetic groove that shimmies instead of throbbing. Mainly they've perfected their formula by massaging the original recipe's similarity to the kind of African pop music that's been flooding blipster-land for years, much of it from Nigeria, the Adebimpe family's ancestral home. The band didn't have to do much tampering to get there, either. Apparently they decided to make a "dance" record, which meant emphasizing interlocking beats in a way they hadn't quite accomplished on the somewhat static "Desperate Youth," and the witchier, moodier "Cookie Mountain." The end result gets closer to pop than anything they've done before, without rearranging their sensibility for the market.

"Dear Science's" first track, "Halfway Home," juxtaposes a tribal rhythm with a disembodied parody of Beach Boys vocalese, then paints the background with a wash of fuzzy shoe-gazer guitar. Adebimpe cuts boldly through the mix, and while the lyrics evoke more than they state, you can sense a relationship gone terribly wrong: "They turned your head into a rest stop for the dead," he sings. "It's over now and I'm insane." The lyrics on "Dear Science" have a way of letting personal and political relationships bleed into one another until they're indistinguishable. The most obvious and successful example arrives on the song "Family Tree," in which Adebimpe, in a tone more wistful and confused than angry, declares that he and his lover are "hanging," "in the shadow of the gallows of your family tree." Could an interracial relationship sound more fraught? There are very few reasons why anyone would think to recast "Strange Fruit" as a love ballad. "Red Dress" is essentially a Fela Kuti song transported to Brooklyn, complete with a horn section and a slightly awkward keyboard riff. Backed by an unmistakably Lagos beat, Adebimpe spits on warmongers (though he does not mention right-wing pols by name, I think we can assume) -- "Hey Jackboot!" he barks. "Fuck your war!" -- and then takes the left to task, including himself, for their complacency: "It's a stone cold shame/ How they got you tame/ And they got me tame."

But the record's much more agitated than bummed out. They've seen beyond the gloom of the non-LP single they released after W.'s appalling response to Hurricane Katrina, "Dry Drunk Emperor." The optimism and sensuality of "Golden Age" -- does Barack need a campaign song? -- is mirrored by its slinky funk riffs. By the final track, "Lover's Day," the band makes a strident, convincing case to create a national holiday for sex, accompanied by a snare beat that brings Memorial Day marching bands to mind.

If you've suspected all along that they might be directing all those tortured love songs at America itself, this track says you're probably right. They've already referenced our country's troubled racial history in an unexpectedly tender exchange on "Family Tree," but "Red Dress" also has its share of similarly provocative quips: 'Hey Slave' they called/ And we caved/ And we answered/ To a new name." The unidentified "you" of the driving, apocalyptic "DLZ" is the same shadowy power structure that artist Barbara Kruger's installations rail against: "Congratulations on the mess you made of things"; "You falsify your deeds/ Your methods dot the disconnect from all your creeds." "Dancing Choose," which sounds like a frenetic homage to R.E.M.'s "It's the End of the World As We Know It (And I Feel Fine)," lambastes a "newspaper man" who's "down for the record but not for freedom" while "the riot for the last hot meal erupts." Then follows a litany of slapdash, snarky images: "counterfeit community," "cod liver dollar signs" and an "angry young mannequin" that's "American apparently." Though it blasts over you in a surreal haze, you can see their indignation in pretty sharp relief.

TVOTR titled the album after a note that Sitek wrote in childish handwriting: "Dear Science, please fix all the things you keep talking about or shut the fuck up." But they, like a lot of Americans, are also demanding that immediate attention be paid to the long-standing problems of the good ol' USA as well.