Monday's bad bailout reality TV from Washington has the rest of the world screaming en masse: Get your act together! 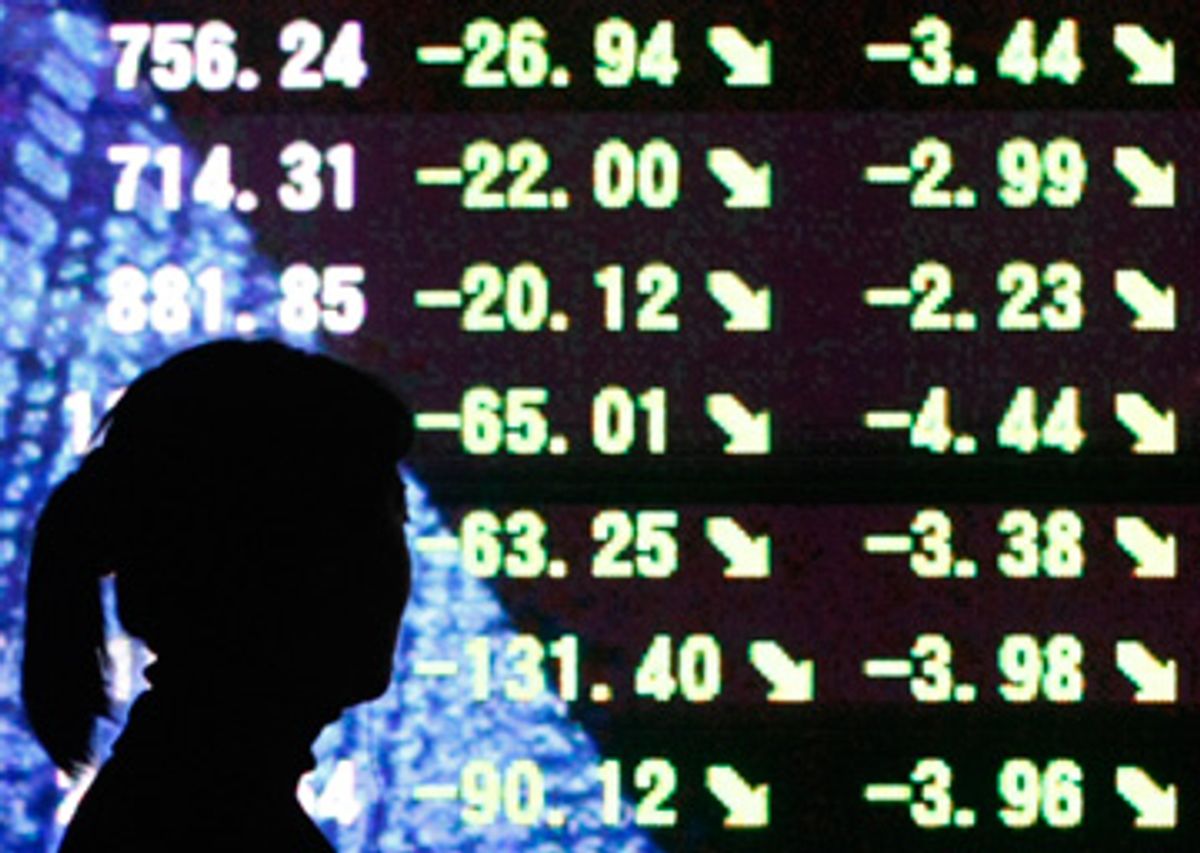 A woman walks past an electronic board displaying share prices in Tokyo Sept. 30, 2008.

After the worst day ever for the Irish stock exchange, on Tuesday, Ireland guaranteed all the debt and deposits of all domestic banks for two years, citing "a serious disturbance in the economy caused by the recent turmoil in the international financial markets." Also on Tuesday India's central bank took the rarely comforting step of declaring that one of the nation's largest banks ICICI, had sufficient "liquidity to cover liabilities to its depositors." Meanwhile, the governments of Iceland, Norway and Sweden all jumped in to bail out local banks.

Also this week: A Chinese insurance company reeled from losses on its stake in Fortis, a bank bailed out by the Belgian, Dutch and Luxembourg governments on Monday. On Tuesday, the Belgian government also came to the rescue of another big European bank, Dexia. On Monday trading on Brazil's stock market had to be halted after stock prices plunged following the rejection of the bailout plan by the U.S. House of Representatives. On Tuesday, the Russian stock market also halted trading for two hours, and the government announced $50 billion worth of loans to Russian banks and corporations to help pay off foreign debts.

Here in the United States, after a Monday during which Wall Street turned all its attention to CSPAN and the unfolding drama of the bailout bill rejection, it is easy to ignore what's going on in the rest of the world. A historic election and a historic financial crisis are keeping our attention focused squarely at home. The rest of the world, however, cannot afford to ignore us. From their perspective, the partisan bickering and rank-and-file revolt that submarined the Paulson plan doesn't fit into a neat little "taxpayer-bailing-out-Wall-Street" box. For them, the framing is a little different. Something like: Will incompetent American politicians and business leaders get their act together and stop the entire global economy from going down the toilet? From a global perspective, the spectacle on the floor of the U.S. House of Representatives on Tuesday was the worst reality television show, ever.

The mood is not friendly.

"We can't be turned into victims of the casino erected by the American economy," Silva said. "It's not fair for Latin American, African and Asian countries to pay for the irresponsibility of sectors of the American financial system."

"It is time for the U.S. Congress to take on the responsibility that corresponds to it. They created the problem, and that is why it is they who have to solve it," he said.

"The degree of leverage nowadays is dangerous and indefensible. Worse, it is not regulated by any prudential supervision," reported the Financial Times. "The current crisis is global in nature but regulation is still national."

The BBC has a handy roundup of world reaction:

"I feel they've taken leave of their senses and I hope that in Europe we will not see politicians and parliamentarians replicating the sort of irresponsibility and political partisanship that we have seen in Washington.

"I think we are all very disappointed that the U.S. Congress and the administration haven't agreed on the rescue package ... That rescue package would have injected a lot of confidence into the international financial systems."

"We are watching the situation carefully. Of course, we will be greatly helped if a bail-out package is quickly approved by the U.S. congress."

The global media reaction is even more annoyed.

In the 1930s, the U.S. Congress did more than its part in helping to turn a financial crisis into a global depression. Yesterday it looked as though it was auditioning to assume that role again.

Ouch! As my son likes to say: "Need some ice for that burn?"

Greed and financial chicanery knows no border, but there is also little point in arguing with the essential truth expressed by a spokesperson for the European commission, Johannes Laitenberger: "The turmoil that we are facing has originated in the U.S., and has become a global problem."

Unfortunately for the rest of the world, they don't get to vote in the U.S., so their concerns are unlikely to make a difference to U.S. politicians in tight races, 35 days before Election Day.