Democrats and Republicans are blaming accountants for Wall Street's woes. They are wrong. 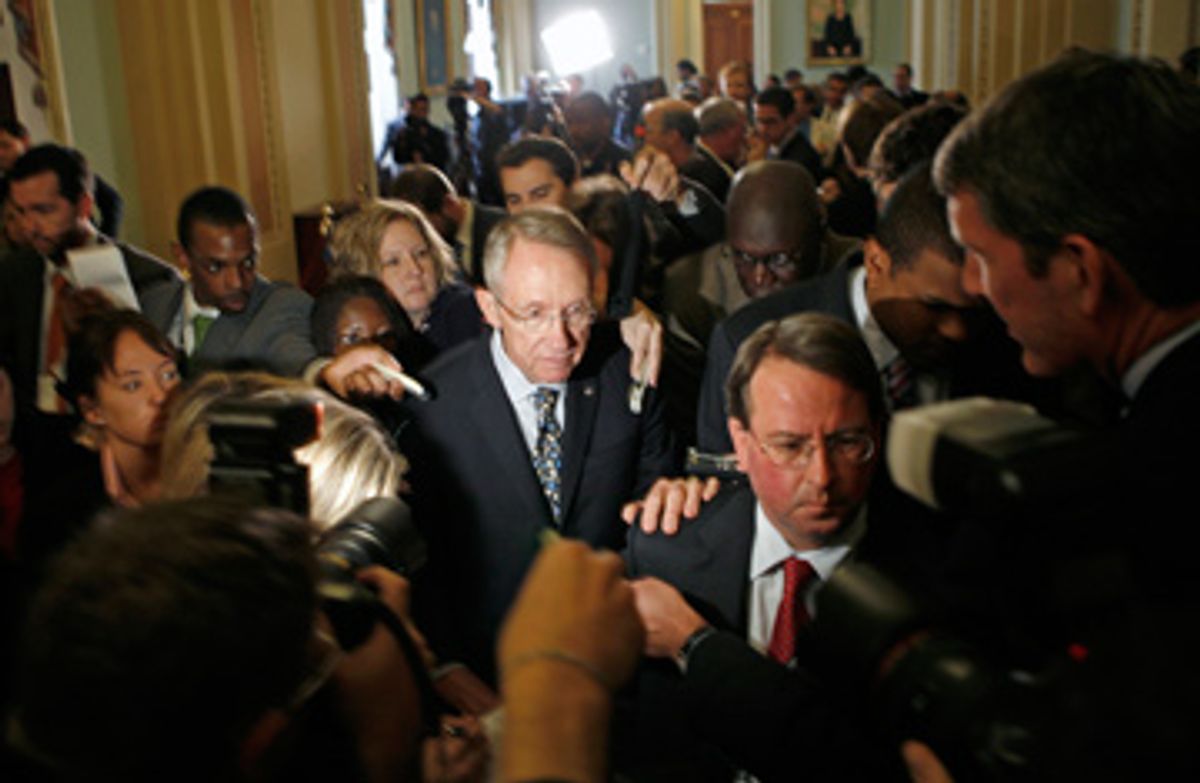 Senate Majority Leader Harry Reid is surrounded by reporters in the Capitol in Washington October 1, 2008.

When a bunch of hardcore House Republican conservatives denounced "mark-to-market" accounting during the debate on the bailout bill on Monday, I was disposed to dismiss the gambit as just another example of free market ideologues carrying water for the corporate sector. But now that I see that suspending "mark-to-market" or "fair value" accounting is also part of an alternative fix-it plan proposed by liberal Democrat Peter DeFazio, D-Ore., and the SEC is making noises about letting financial institutions be more flexible in how they interpret the rule, it is clearly time to take a second look.

And I still think it stinks.

In a nutshell, fair value accounting requires corporations to value their assets according to the current market price. This is great for financial institutions when markets are booming -- they can book all kinds of profits without ever having to actually sell anything. But it is dismal when markets crash, and toxic, risky assets suddenly get priced by the market at rock-bottom levels.

Now that there is essentially no appetite for risky mortgage-backed securities, collateralized debt obligations, and other exotic derivative fare, Wall Street is telling us, hey, how about we suspend the rules, and value all this stuff at the price it would fetch, say, a few years from now, when markets recover and the credit crunch is nothing more than a bad dream?

OK -- there is a legitimate issue buried here. I asked University of Oregon economist Mark Thoma, who keeps track of the state of economic thinking on the relevant issues of the day better than anyone I know, whether there was a basis to the sudden upswell of criticism of mark-to-market accounting. Here's what he told me:

"One way to think about it is that when there is market failure of some sort that is temporary, values will be distorted during that time period and will not reflect the true value at maturity.

...I think the idea is that when the market is in a bubble, marking to market (instead of to fundamentals...) inflates the asset values, and that drives further demand, raises the values, and thus chases price upward.

If the price were marked to fundamentals instead, then the value of the asset wouldn't follow the market up, and that would have a stabilizing effect relative to the mark-to-market approach.

Now they are making the same argument on the other side. The true, fundamental values are different from the values we see today, so, it's like a negative bubble in that sense. Prices chase values down, this becomes self-reinforcing, and makes the problem worse. If prices held at their fundamental values, then there would be more stability."

So, mark-to-market accounting contributes both to credit bubbles, which no one on Wall Street ever complains about because they are too busy raking in the cash, and credit busts, at which point, Something Must Be Done.

There's just one big fat honking problem. If mark-to-market rules are suspended, what replaces them? Surely we don't trust the owners of these risky assets to decide for themselves what they're worth?

From the SEC's "Clarifications on Fair Value Accounting," released Sept. 30:

Yes. When an active market for a security does not exist, the use of management estimates that incorporate current market participant expectations of future cash flows, and include appropriate risk premiums, is acceptable.

Internal assumptions! Never mind what the market says, we'll just trust you to figure it out for yourselves, boys, because we know you would have no reason to lie about something as immaterial as the state of your own finances!

The attempt by members of both parties to suspend "fair value" accounting is outrageous. Despite Republican claims to the contrary, the United States is not facing a severe financial crisis because of accounting issues. The crisis was created by investors who made huge bets with borrowed money on risky loans and complex derivatives that they did not understand and that blew up in their face when the housing market collapsed. The crisis was created by greedy fools who blithely sold insurance against the possibility of anything bad happening to these securities, without ever dreaming that they might actually have to pay up. The crisis was created by politicians who explicitly made sure that these bond-default insurance policies -- credit default swaps -- were unregulated.

Don't blame the accountants. Listen to them: (Compiled by Calculated Risk.)

"Blaming fair-value accounting for the credit crisis is a lot like going to a doctor for a diagnosis and then blaming him for telling you that you are sick." -- analyst Dane Mott, JPMorgan Chase & Co., Bloomberg

"Suspending the mark-to-market prices is the most irresponsible thing to do. Accounting does not make corporate earnings or balance sheets more volatile. Accounting just increases the transparency of volatility in earnings." -- Diane Garnick, Invesco Ltd., Bloomberg