"The Ex List" is like "Sex and the City" without the trustworthy friends, the cool clothes and the laughs. Is this a dramedy, or a cautionary tale? 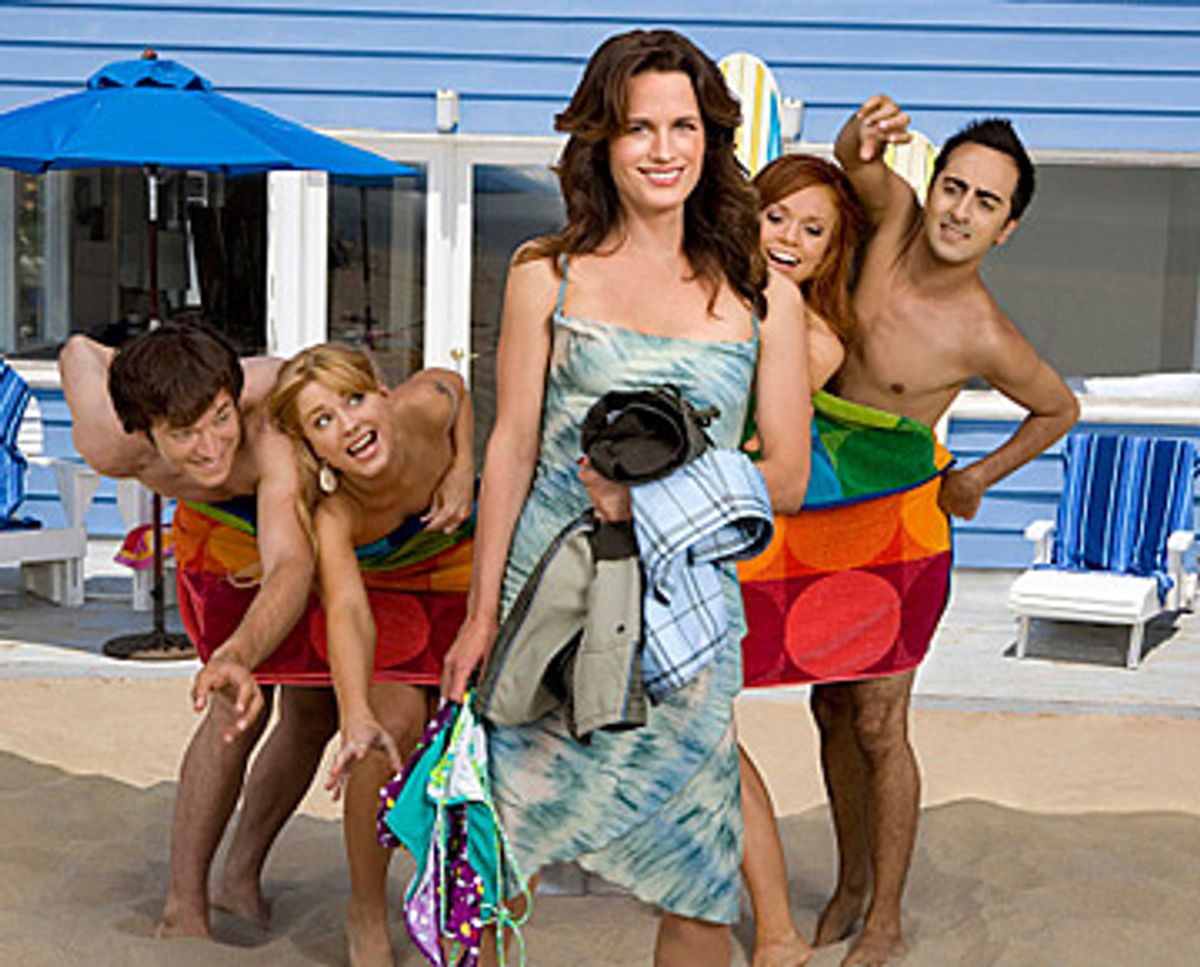 "Sex and the City" made being single look fun. Yes, the search for love was also sometimes tragic, infuriating, humbling, disappointing and irritating. But even when Mr. Almost Right skipped town, the women of "Sex and the City" still had great careers, enormous closets full of clothes and a few trustworthy friends to lean on through the heartbreak.

CBS's "The Ex List" (premieres 9 p.m. Friday, Oct. 3), on the other hand, presents a far drearier portrait of singledom. Told by a psychic that her future husband is a man she's dated before, an apparently aimless, 33-year-old female is reduced to sifting through her failed relationships to locate the ex-boyfriend with whom she's destined to live almost happily ever after. But if she doesn't find him within the year, the psychic tells her, she'll be alone forever! (Cue horror movie soundtrack.)

Now sure, this same terrible fate looms ever present in the background of Carrie's foibles on "Sex and the City," just as it informs the thinking of many 30-something singles who field a steady flow of wedding invitations and baby pictures from their domesticated friends. But condemning our heroine, Bella (Elizabeth Reaser, she of the deformed-face guest spot on "Grey's Anatomy" last season), to rummaging through her own emotional dumpster full of hapless, commitment-phobic or highly rejectable ex-boyfriends transforms this picture from laughably relatable to slit-your-wrists devastating. For single women, many of whom have occasionally contemplated returning to thoroughly unsuitable exes just to escape the life of the cat lady, this is Dante's fifth circle of hell.

If Miranda pulled this maneuver on an episode of "Sex and the City," at least it could be chalked up to a brief bout of insanity that would inevitably resolve itself over cosmopolitans, sushi and hearty laughter all around. But on "The Ex List," Bella's desperation never leaves the frame. She spends the first hourlong episode chasing down some guy whom she already decided was totally wrong for her. Yes, there's a reasonable amount of humor that can be extracted from past relationships. "I'm gonna write us a rock opera," says Bella's rocker ex, Johnny (played brilliantly by Eric Balfour, best remembered as Claire's first boyfriend on "Six Feet Under"). "God, every time that I see you, I'm just so into you!" he later tearfully gushes, as Bella cringes. "I wanna, like, get tattoos together and drink each other's blood!" Yes, we've been there, and it was just as wonderful/awful.

But when Bella's not mulling over outdated matches, a process that's about as rewarding as tasting long-expired milk to see if it doesn't make you retch, she trades witty quips with a trio of dopey, "Friends"-lite slackers who seem to spend most of their leisure hours crowded into the same kiddie pool. These three stooges, seemingly unencumbered by jobs or discernible personalities, mostly play the foil via a steady flow of somewhat outdated hipster speak:

Dopey friend: Yet you found it hot.

Bella: No, I mean, he was hot while he happened to be shutting me down, but it's not like the shutting down itself was hot. I really think he's changed.

Dopey friend: Yeah, he's changed into a guy who doesn't like you anymore. At the exact same time he became more appealing. Weird.

Bella: He totally still likes me.

Why are these 30-somethings speaking like 40-somethings spoke when they were 20-somethings? The whole charade feels wildly inauthentic, like watching a puppet show where middle-aged people reenact the most trying times from their single years with big, pretty, early-'30s cutout dolls. Instead of appearing casual and realistic (I assume that was the goal), the dialogue just makes these characters come across as losers. When Bella says "Really?" and it's supposed to be a joke twice in the first episode (once when a bird craps on her and another time when her sister says something utterly obvious and she wants to mock her), the whole thing feels disconcertingly cloying and unnatural. You half expect her to say "Helloooo!" or "See ya, wouldn't wanna be ya!" or "Where's the beef?" next.

We're meant to believe that Bella has a life beyond searching for a man, of course. She works in a plucky flower shop that's about as realistic as the Pie Hole diner on "Pushing Daisies." Yet it's clear that arranging flowers and watering houseplants at her father's business isn't the sort of career that's going to rescue our heroine from crippling existential crises and a ticking biological clock.

But then, the point of most single-girl shows (and their downfall, not surprisingly) is that we're supposed to derive most of our chuckles from watching these women humiliated in imaginative new ways each week. Think of Meredith on "Grey's Anatomy." Think of "Ally McBeal." Our attractive but self-defeating single heroine swoons, takes a big risk, embarrasses herself, then retreats, eyes wide, face blushing, lower lip bitten in palpable regret.

The casting directors of sitcoms (and one-hour dramedies, in this case) have the unfortunate tendency to embrace actresses who imitate the self-doubting affectations of Jennifer Aniston or Calista Flockhart. But all of the stumbling, pigeon-toed prancing, stuttering, bouncing, eye rolling, gasping, mouth slapping and bizarre facial tics in the world mostly make female actresses look like confused half-wits. Elizabeth Reaser as Bella is at her most believable when she's subdued and understated. Unfortunately, she spends most of the hour emoting and gesturing so frantically, it's hard not to believe she's been snorting crystal meth in her trailer.

And at least Meredith (of "Grey's Anatomy") and Ally (of "Ally McBeal") had demanding professional careers and a handful of believable, distinct friends to keep them from sinking into the abyss. Apparently the creator of "The Ex List," Diane Ruggiero, agrees. She balked when CBS tried to reduce what little life Bella had -- her job at the flower shop, for example -- in favor of focusing solely on her "romantic quest." Ruggiero, a former "Veronica Mars" writer who quit "The Ex List" over creative differences with the network a few weeks ago and was promptly hired by "Veronica Mars" creator Rob Thomas to write for his upcoming show "Cupid," told Alan Sepinwall of the New Jersey Star-Ledger, "I felt very strongly that she [Bella] has to have a regular life, and this weird quest has to almost feel like a burden at times. She has to feel put upon, otherwise she bugs me. Every kind of spin they tried to put on it like that, they just wanted it to be happy and optimistic." Ruggiero also complained that the network wanted the show to stick closely to the Israeli original (on which it's based), and they wanted Bella to say "Dude" less often.

The problem is that Bella, in her current dippy, insecure state, doesn't fit the profile of someone who might say "Dude" convincingly -- like, say, Veronica Mars. Even when Bella is standing up for herself, we don't buy it. "I'm on the soul mate path, man," she tells one of her exes, who refused to marry her after living together for three years. "No stopping or standing." We get the message: She's strong, she's cool, she's putting her foot down. But come on, who talks that way?

But even though a more fulfilling job and a more compelling personality for Bella might help, it's pretty understandable that the network found her depressing. Although she doesn't have to be a yuppie with a closet full of shoes just to make her more reassuring, the awful truth is that being single in your 30s can be pretty unsettling. Any show focusing on that particular demographic is forced to walk a thin line indeed. Without a solid, believable medical career and some dependable, interesting friends, Meredith is just a hapless loser swooning over an older, more successful, until-recently married man. Without funny, true-blue friends and a closet full of wacky clothes, Carrie is just an odd-looking girl about to be crushed under the enormous weight of her credit card debt. The strength of these characters lies in their intrepid personalities, the colorful particulars of their lives and the buoyant way they bounce back from disappointments.

Like so many female characters on TV these days, Bella feels at once idealized and demeaned, placed in humiliating circumstances and then forced to claw her way out in ways that can't help feeling forced and disingenuous.

But then, maybe "The Ex List" isn't made for single women to watch at all. Maybe this tragicomic tale aims at soothing former single girls who settled for that special anyone years ago and need to reassure themselves that they made the right call. "Just look how miserable I'd be if I hadn't settled for Mr. Sort of Almost Right!"

But the truth is that even married women would rather live vicariously through back-slapping, cackling single women in designer stilettos who sleep with male models and run their own P.R. firms than slouch around with desperate, dorky chicks who feel plucky and unconventional just because they call their guy friends "Dude." Sure, a dark and desperate tale with a frankly depressed, bitter character at the center would be fantastic, as would another "SATC"-style bubble-gum fantasy world. Instead, "The Ex List" tries to pull off an impossible balancing act: We're supposed to believe that Bella is at once pathetic and admirable, hapless and perkily resilient. As a result, this scrounging-single fable is an unrealistic, clumsy, cringe-inducing mess.