How do you solve a problem like Sarah Palin?

The Alaska governor has become a drag on her ticket; strategists who've worked with vice presidents and hopefuls on both sides offer advice on how to relaunch the Palin brand. 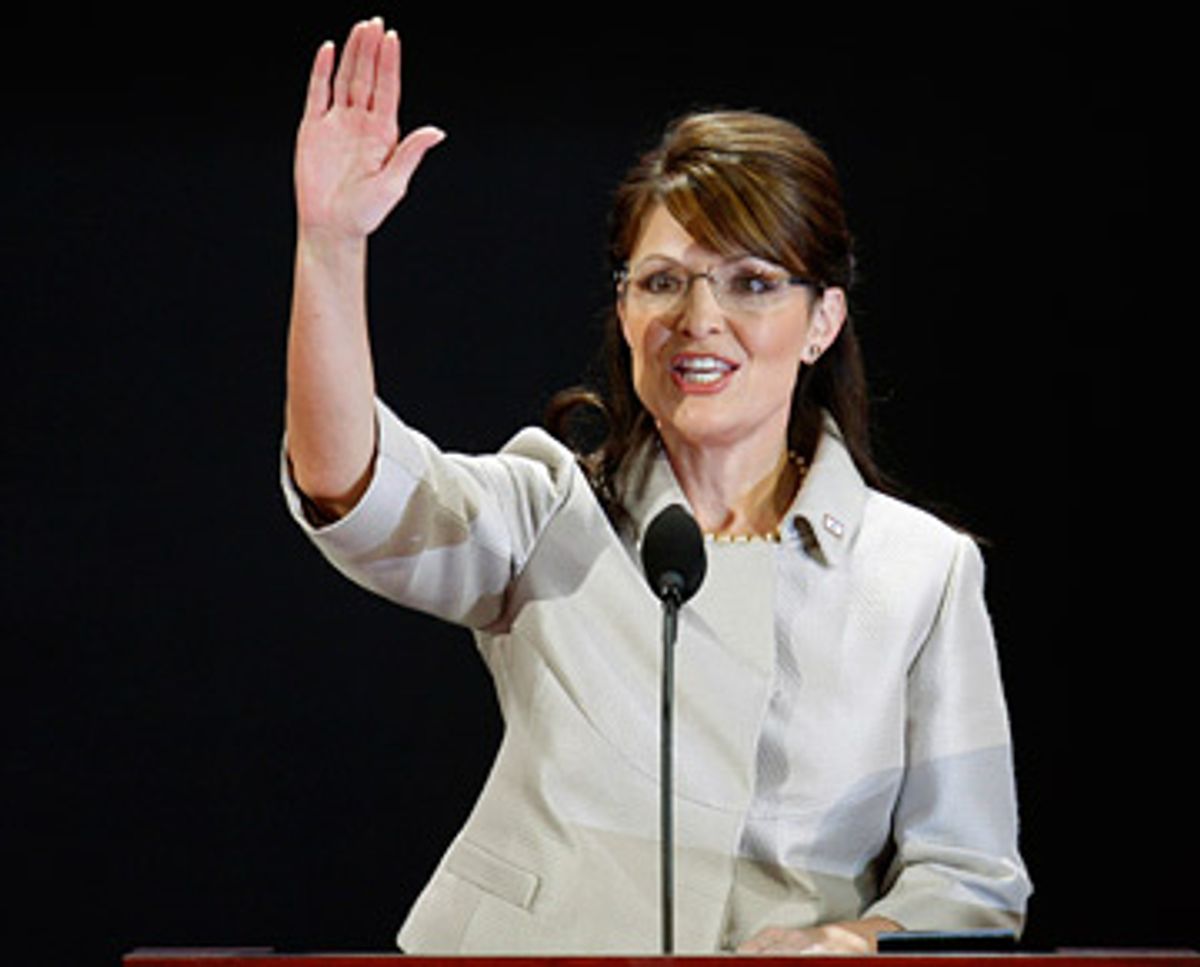 Only weeks ago, Sarah Palin seemed like an unstoppable force of nature. Propelled by the success of her convention speech, she gave John McCain a boost in the polls, injected much-needed enthusiasm into his campaign and struck fear into the hearts of Democrats.

Now, the honeymoon is over. Poll after poll has shown voters' opinion of the Alaska governor in steep decline, and she may be dragging McCain down with her. A series of disastrous interviews has made her a figure of ridicule and pity. Practically every opinion-maker on the right seems to have offered an opinion on the flaws in the McCain campaign's Palin strategy. One prominent conservative columnist, writing for the National Review, even asked her to bow out of the race.

So, with the first vice-presidential debate looming Thursday night, Salon went to the experts -- people with experience working at a senior level for a vice-president or vice-presidential hopeful -- to get their take on Palin. How can the Republicans relaunch this flawed product? What should she do at the debate? And, more important, what should their strategy be for the month still left between now and Election Day? Is it a good idea to keep shielding her from the media, and if not, to whom should she be giving interviews? What should she say on the stump?

On Palin's performance, and the McCain campaign's Palin strategy so far:

One of the worst things about the political side of the Bush presidency is that they've essentially kept him sequestered. There are these candidates -- Palin is one, Bush is one and Quayle was one -- that have an amazing ability to connect with voters. Not all voters, but the ones they need. [But] they're not intellectuals. They're plenty smart, they're just not intellectuals. And these handlers get a little spooked about how they're going to sound talking to Jim Lehrer.

[The reason we know who these people are is] because they can connect with voters. I have to presume that's the case with Sarah Palin. This woman got elected governor of Alaska. This woman is a serious politician. So I find it just appalling that they won't let her out there.

She doesn't have a Washington insider's mastery of the jargon and the details. That's okay; that's something John McCain knew and thought was okay. But in order to mitigate her deficiencies, they have also managed to stifle her virtues, and that's idiotic.

Gerstein: They've created a perception problem for her. And by hiding her, they've raised suspicions that she's not ready, and that she can't even handle talking to reporters. Which raises questions about how she can handle negotiating with leaders on the world stage -- if you're scared of Chris Matthews, how are you gonna go up against Putin?

But I think what it also did is that what she said and did became dissected under a magnifying glass, to an extent that it was really setting her up to fail. And I think they would have been much better off rolling her out gradually, to recognize that she has to face the scrutiny sooner rather than later and take advantage of her natural likeability, and you know, raw political talents ... [P]eople are reasonable, they're not going to expect that she's going to know the name of every world leader the moment she was picked to be McCain's running mate.

Mattingly: I think she’s had a great couple of weeks ... I think she’s changed the dynamic of this race, she put energy into it, she’s connecting to the average American voter, certainly in a way that Joe Biden isn’t. The scrutiny has been really intense, but you know, at the end of the day, people don’t vote for the bottom of the ticket, they vote for the top of the ticket. She’ll get the post-debate bounce, and put her right back up there on the hustings as an effective campaigner. I’m speaking to you as somebody who now lives in California, I’m not affiliated with the campaign, I think she’s a phenom.

On how to deal with the media -- or not:

Kaufman: They have not done enough local media -- I would not do any national media whatsoever. Back when I was doing this in 1980 and 1984 [for George H. W. Bush] every time we went to a media market we did local media, and it really has impact. And then you get the national stuff anyway. Each time you go to a local media market, you set up interviews with all the local anchors. You get better coverage, you get more coverage, and they permeate better ... When you do that, let the national media whine -- where's it written in the Constitution that the national guys have to get time?

Schiffren: I think she should do local media everywhere. I don't know that you want to put her up against Katie Couric. Katie's entire goal is going to be to prove that she's smart and not a pushover, and that's going to cut against any candidate like Palin. You send her to talk to the people who -- in every city and state, there are people who host the more serious local news. They have questions, and they will give her breathing space to express herself.

Kornblau: If I were her press secretary and it was clear to me that she couldn't withstand the media scrutiny and answer the tough questions in a way that could serve McCain well, I guess I'd be left with no other option than try to hide under the desk until November and not get called on it. But you do reach a point in an election where there's really a responsibility on the part of the media to call them on it.

Most vice-presidential candidates ... are accessible to the media on a daily basis. They do as many local interviews as possible. One of the most important things that they can bring to a campaign is doubling the surface area that the ticket can cover.

Gerstein: I think at some point -- I couldn't tell you right now whether this is the right call to do before the debate -- she should have had a full-bore press conference. I don't think it's a question of going on one venue or doing one interview. But I think they've been so single-minded in defending her readiness for office, it doesn't meet the laugh test. It's hurt her credibility.

On the vice-presidential debate:

Khachigian: A big percentage is going to be her presence, her demeanor. Just like Obama was helped by his demeanor and presence in last week's debate, she'll be helped by just being herself, frankly. She has great personal charm, she has a number of qualities that Ronald Reagan had, which includes the ability to deliver a tough line without looking harsh or negative. She has great stage presence when she has the opportunity to prepare, which I think she has had. She's comfortable in her own skin, like Ronald Reagan was. She has a real one-on-one affinity with average folks ...

I have sort of a dream closing statement for her: "I didn't have 36 years to hone my ability to raise taxes, 36 years to plagiarize British labor leaders ... 36 years to come up with ways to exaggerate my academic performance in college ..." I'm sure she won't use any of that, but ... if she could pull off something like that it'd be great.

Kaufman: I've been lucky enough to know her a bit beforehand through the Republican Governors' Association. She's a very smart, articulate person and I think the most important thing is just getting her comfort level up. As long as she's comfortable she's going to be fine. People like comfortable people, whether it be the president or their date.

People don't expect her to be a foreign policy advisor, genius, expert. They understand that, and she shouldn't try to be one. When she's herself, she's terrific.

Kornblau: She's positioned fine for the debate because the expectations are incredibly low. They've set their own expectations that way. I think the responsibility falls on the media not to buy into the artificially low expectations that have been set by the nature of the McCain campaign's tactics.

Gearan: I think the expectations games on these debates are pretty significant. The expectations game was one thing we had to deal with in 1992. People just assumed Vice-President Quayle would be a weak debater. It was part of the public consciousness that he had stumbled with [Democratic candidate Lloyd] Bentsen’s one-liner, which just destroyed the perception of the debate, when actually he had acquitted himself pretty well.

Ultimately it’s a stature question. Do these people pass the threshold of potentially serving as president?

On strategy, and message, for the month ahead:

Khachigian: Put her on the road. I mean, that's the greatest thing she brings to this campaign really, this huge attraction she has all across the country.

I'd put a speech in her hands that mirrored the speech she gave at the convention. She delivers red meat with a velvet glove, she's deft at it. [Make it] tough -- put the blocks to Obama and to Biden, just like she did at the convention. Say that Obama's nowhere near as prepared as John McCain to be president, and Joe Biden has had four decades to hone his skills as a big government, high tax, pro-regulation liberal. Boy, I'd make it tough.

Schiffren: [H]er clear strength, so far, has been that she has this kind of common sense and she is very likeable. So that's great. But now we need to hear three things. She needs to talk about the fact that she was elected governor and has governed Alaska for two years. She should talk about what that entails -- what the budget was, how many employees she oversaw, and the fact that this all entails accountability that no senator in the United States ever has to face. She needs to emphasize that without being cute.

I think she should say, about her inexperience on foreign policy, "Look, I haven't spent my life hanging around Washington as a career politician having the benefit of an education at taxpayer expense on these issues."

She needs to do this all in a firm tone of voice that has no wounded edge. She shouldn't sound defensive, but this needs to be a defense, a steely defense.