The Word from Wasilla

Sarah Palin's Pentecostal supporters in Alaska hail her debate performance and her rise to the national stage as the work of God. 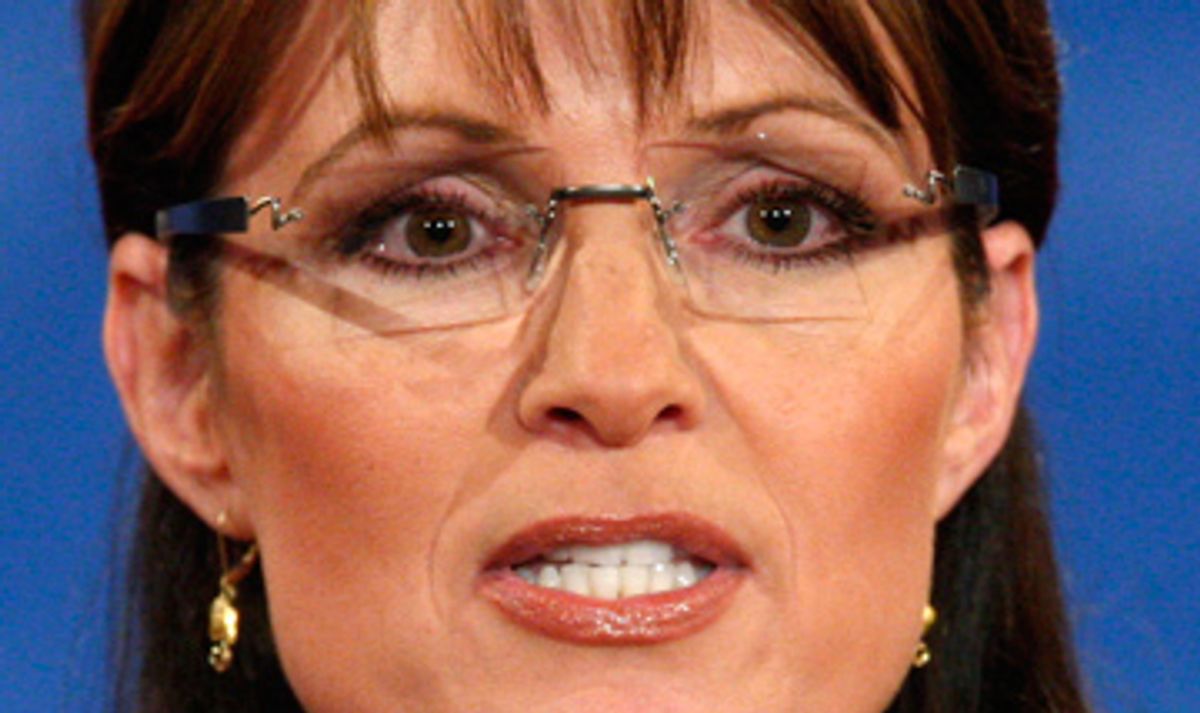 Sarah Palin appeared transformed in last night's debate. There may be an unearthly reason. If God is listening, he cannot be missing the passion that evangelical voters are investing in her.

Only a few days before her first and only command performance before the voters, we stood with over 100 Pentecostals in Crossroads Church just outside Wasilla, Alaska, and heard the pastor proclaim that Sarah Palin would be the ambassador of God from righteous believers.

"We do know Sarah personally and she knows we pray for her," the Rev. Dennis Hotchkiss told us when we called him hours after the confrontation between the beautiful and bold heroine from the farthest frontier of the country and the seasoned lion of the Senate. That night, pastor Dennis had gathered some of his flock in the church -- not to watch the debate: "We didn't want to be distracted" -- for 90 minutes of intense intercessory prayer, including speaking in tongues. Then he went home to watch the videotaped debate. He was well pleased.

We had spent the crazy week before the debate in Wasilla. While the economy was falling like a mountain into the sea, and Palin was quarantined from what she and the McCain camp believe is the toxic "filter" of the press, we visited three churches close to Palin, talked to half a dozen Pentecostal and evangelical pastors, and watched the Obama-McCain debate with a family of her closest supporters.

"In my heart of hearts, I believe God's favor is on her," Kathy Moffitt told us, as her sister and children brought us sloppy Joes and homemade brownies in the new lakeside home built by her 75-year-old mother, Janet Kincaid. "You're here, you see how common this place is, how rustic. She [Palin] wasn't schooled to be a politician, to be famous or important, and yet she has gone every step of the way."

The Kincaid family tipped us off to something new afoot in the world, what sounded to us like a new national Jesus movement. Kathy told us to look at how 40 days of prayer and fasting had been organized for Sarah. When we went to the Call Web site, we found the current focus was two initiatives on the California ballot for November, concerning gay marriage and parental consent for abortion. Pastor Dennis explained to us that Sarah's adherents fold prayer for her into that movement. We asked if he thought Roe v. Wade could be overturned in his lifetime.

"I think it's possible," said the 50-year-old cleric. "I believe, with another conservative judge, it could be overturned."

Dennis Hotchkiss and his Crossroads congregation are not a bunch of old stiffs. They gather in a high school auditorium with no religious "icons," to call the spirit of the Lord through Christian rock 'n' roll, a reaching up of arms, waving of flags, spontaneous utterances (speaking in tongues), and a sermon that included cheerleading for "our Sarah" and assurances to one another, "You are righteous." The pastor, a handsome, silver-haired man who preaches in a sport shirt untucked over jeans, was eager to educate us.

We asked him. "If Sarah Palin becomes vice-president, would she be the most committed Christian we've had in that office?" Yes, he said. "She's not politically motivated to the extent most politicians are. It's the positions she's going to stand on. She would want to bring morality to the nation." In the debate, Palin again professed her love for Israel. We asked pastor Dennis if this is related to the Pentecostal belief in Revelations and the end times, when Israel has a chance to be saved before the Rapture. He gave a further interpretation.

"The Bible is pretty clear ... the Lord has said nations will be judged according to how Israel is treated. So a country that is trying to assure Israel a peaceful life is going to be blessed by the Lord." In effect, he said as long as the U.S. protects Israel, we, in turn, will be protected by God.

For those who worry and wonder why religious conservatives aren't concerned about Palin's lack of foreign policy qualifications or economic sophistication, pastor Dennis had the answer:

"When it comes to economic policy, to God it's not that important, because He is our provider," the pastor said in his most reverent voice. "Our trust is in Him, not in economic policy." He emphasized that this is an overriding issue for the evangelical faith community, "because we believe when the country puts its trust in God -- and not in man's systems and man's reasoning -- but makes their decisions more based upon God's word, we're going to find our economy, our nation, being healed."

The most important revelation of the debate was Palin's declaration that she would go beyond Cheney in expanding the powers of the vice-presidency, including a stronger legislative role.

"Our Founding Fathers were very wise there, in allowing, through the Constitution, much flexibility there, in the office of the vice-president ... we will do what is best for the American people in tapping into that position and ushering in an agenda that is supportive and cooperative with the president's agenda. I do agree with him [Cheney]."

Biden shot back, "Vice President Cheney has been the most dangerous vice-president we've had probably in American history. The idea he's part of the legislative branch is a bizarre notion, invented by Cheney, to aggrandize the power of a unitary executive, and look where it has gotten us."

"Biden jumped all over that," scoffed Janet Kincaid. "But if you're a leader, you're a leader. You can use your skills to lead people to the Lord or to hell."

But if different Christians are praying for conflicting things, how does God sort it all out? we asked.

Deirdre English is the director of the Felker Magazine Center at the Graduate School of Journalism, University of California.

Gail Sheehy is a contributing editor for Vanity Fair and Parade magazines and is the author of "Passages" and other books.