Joe Biden is made of testosterone and strong verbs

The media is piling on Sarah Palin after last night's debate, but all I can think about is her opponent. 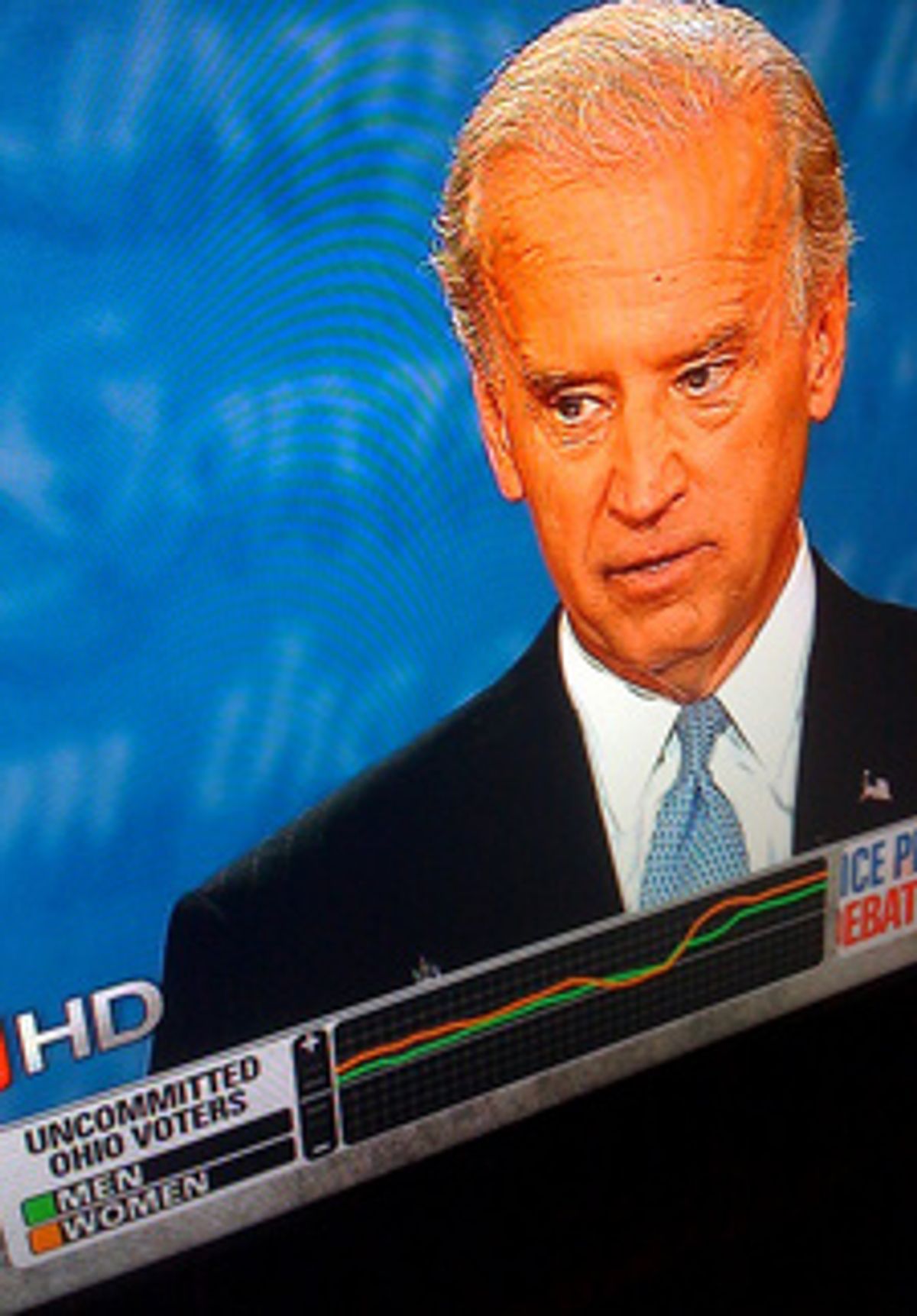 A few weeks ago, I forgot about Joe Biden. I don't mean I forgot who he was, I just plum forgot he was involved in this presidential race. He disappeared from the landscape. No jokes at his expense, no assaults on his character, no lampooning caricatures of his signature smirk. Nope, he was gone.

And then Thursday night, he came back for me. In a major way.

I'm no pundit and don't pretend to be, so all I can tell you is how I experienced the debate (on a couch, with beer and Vietnamese food and an open laptop, sitting beside my friend Bryan). I thought Sarah Palin began well -- good eye contact, strong body language, that devilishly clever "Can I call you Joe?" -- but as the debate wore on, I was struck more and more by how Biden was puncturing her shtick. Sarah Palin kept lobbing her zingers, and a few of them might have struck, but every time she aimed for his heart, Biden just laughed. A good-natured laugh -- not forced but an easygoing, amiable laugh that proved just how game he was for this battle, how native this environment was and how thick his skin had become. And it yanked away a little bit of her power each and every time. She went from a forceful presence to a foolish scold. Maybe I'm overstating the imbalance. But I swear she was starting to get nervous and pissed toward the end, pulling out desperate moves, like that stupid wink. Have you ever tried to discipline someone and then had them laugh in your face? It's maddening. Palin may be a pit bull, but last night, Biden was holding the leash.

I watched the debate on CNN, which has replaced its regular annoying scroll across the bottom of the screen with a special annoying scroll -- a real-time graph that charts the reactions of certain undecided groups: In this case, undecided voters in Ohio, divided by gender. Depending on your viewpoint, this is either fascinating or infuriating -- for me, it is a little of both.

At first, the division by gender struck me as ham-fisted, but I must admit it was a terrific prism by which to view the debate (to what extent it is correct, or indicative of any larger trend, I cannot say). From the beginning, Biden scored high with women and Palin was flailing. There were some exceptions to this trend, of course, but if you are interested in an overall snapshot I would have to say: Women buy Biden, and they are leaving Palin on the shelf.

This reflects my experience, and so it feels true. In a nutshell: I believe him, and I think she is full of shit. My God, my heart was pounding when Biden spoke about the loss of his wife and child -- an eloquent, moving moment that, as Joan Walsh pointed out today, was one of the key exchanges of the debate.

"Joe Biden!" my friend Bryan said after that speech.

"Are you in love with him?" he asked.

I had to think on this. His face was a bit orange from the makeup. He has a bald spot, bushy eyebrows. Not my type, really. "That man is made of testosterone and decency and strong verbs."

I don't know what Joe Biden is made of, exactly. (I suspect a doctor would disagree with my diagnosis.) But what I know is that he is well spoken and confident and had the decency not to correct Palin when she made amateur blunders (calling David McKiernan "General McClellan," for instance). But he still refused to take her bullshit.

When Biden unleashed his righteous anger on Dick Cheney -- "Vice President Cheney has been the most dangerous vice president in American history" -- you could practically hear the stadium roar. And if you were watching that graph on the bottom of the CNN screen unfold its little narrative, you saw a spike in both genders' reactions. (Bryan took a picture of the screen at that moment, which is displayed above.)

I have complained on this blog about the frustration I feel when people talk about how Palin is hot. And so as I explain how I feel about Biden -- swoony, sweaty, Joe Fucking Biden! -- I have to check myself. To what extent is this a base physical response, a girlie crush indicative of nothing substantive and perhaps even somewhat embarrassing? Maybe. Possibly. Probably. At least a little bit.

But to what extent is it the euphoria of watching a man with real command of facts, details and history? The gratification of agreeing with the person at the microphone when you feel as though you have been robbed of a voice? The satisfaction of watching Biden knock Palin down -- not like an animal, but like a gentleman and a scholar? To what extent is it my throbbing boner (pardon the expression) for gentlemen and scholars? As one of my friends said this morning, he played the romantic hero. And I know it might sound weird, but as I watched him last night one word kept popping into my head, and that word was: virile.

A female friend of mine listened to the debate on the radio. I asked her if she shared my impressions. She did not.

This is a very smart woman, whose opinions I often solicit. I started to wonder: Maybe I'm alone in this? Then I heard from another female friend who watched the debate on TV. "I think I'm falling in love with Joe Biden," she told me.

Ah-ha. I sense an "I've got a crush on Joe Biden" video coming on. YouTube entrepreneurs, you're next.