The late buckaroo populist and freedom fighter would have had a ball with the insanity of this current news cycle. 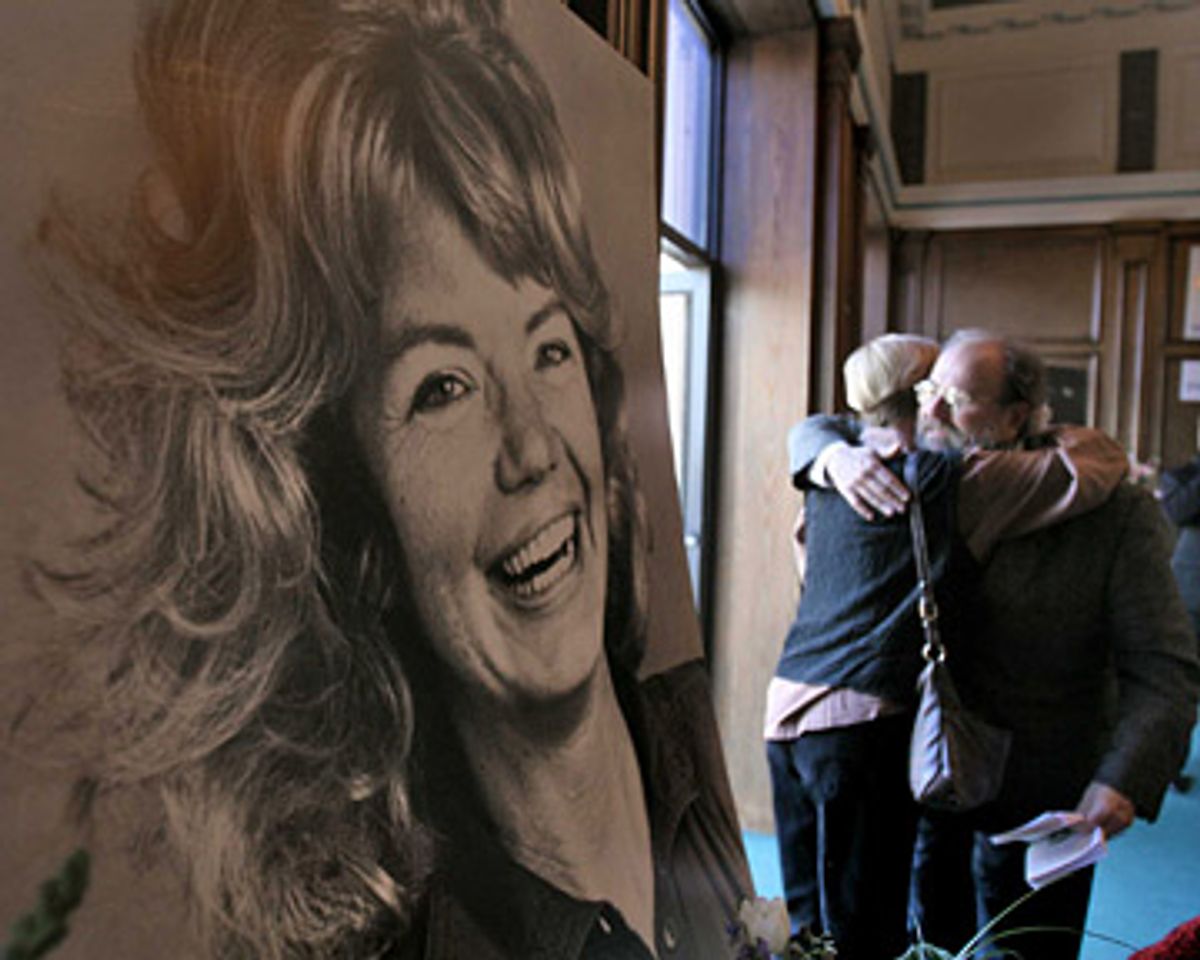 It breaks a girl's heart to know that Molly Ivins does not get to have a go at the Republican slate this year. I can see that big, rosy, sunflower face watching this all with astonishment and roaring with laughter. Ivins -- the legendary buckaroo populist, journalist, freelance hell-raiser and freedom fighter -- would be pounding her fists on the arms of her easy chair, stomping her feet as if listening to live bluegrass.

She would have had such a ball with Sarah Palin -- the trooper scandal, her love of moose (between buns), the flamboyantly botched television interviews, the bravery of people who hunt wolves for sport, from the air. Even though Molly was a Texan -- who would have been on guard for the sneering tone of liberal criticism toward anyone with a gun or a double-wide -- she still would have obliterated Palin as a faux populist wingnut with a tanning bed instead of a heart. She would have made great hay with the capacity of certain politicians to reinvent themselves in entirely new realities, as newfound populist Brotherman McCain has done, and his desperate, icky laugh of contempt might have raised some worries for her.

She would not have been happy with either McCain or Obama for opting out of public finance: She would mention Phil Gramm at the drop of a hat, McCain's chief financial guru, whom she always called the senator from Enron. I think she would have been intrigued by Obama, for all the game-changing aspects he's brought to the arena, for upending all the assumptions about whether someone could win with such a spooky name. She'd have cheered his speech on race, been amazed by his speech in Berlin. She'd have been pissed at the Democrats for not being as robust as they should have been on civil liberties, even as she reasserted her heartbreaking faith in American democracy, the faith that if we stuck together, we'd figure it out in the end. We'd somehow help the poor.

She would have celebrated the tidal roar of support from younger voters, who have the vision and stamina to fight for someone who would hold the nation's leaders to account, people who would fight to make this a country where it was once again safe to be a small child, or a very old person, which it has not been for approximately 7.6572 years.

She would have known all along that this election was going to be as tight as a tick. She would have had the sense to be afraid but to not let her fear hurt her. She would have done one constructive thing after another: Sent money to swing states, offered her car to volunteers from out of town, let young campaign workers sleep on her couch.

The last time I saw her, she was several weeks away from death, spending most of her time in bed, hanging out with her best friends and her dog. And you know what she was doing, off and on, the weekend I spent with her? She was working on her last column, about the need for Americans to fight like hell to stop Bush's proposed surge in Iraq. All she had at that point was a great ending: "We are the deciders. And every single day, every single one of us needs to step outside and take some action. We need people in the streets, banging pots and pans and demanding, 'Stop it, now!'"

She was also rereading parts of her favorite books when suddenly she wanted to have a dinner party, because I had never met her great friends, "Shrub" co-writer Lou Dubose or populist heavyweight Jim Hightower. This was a major obstacle to happiness for all concerned. She adored those two men, and I was commanded to call them. Unfortunately, Lou, her longtime collaborator, was out of town. So, instead, she told me Lou stories for half an hour.

No one loved her stories more than Molly, especially those about the art and absurdity of politics. This was part of her greatness. She reigned like a queen -- imposing carriage, great sense of style, with a mind and smile that radiated warmth.

In between trying to write her column, she would call out to me. "Associate Party Planner!" she would say. "Front and center! We have a problem!" So I would appear with the clipboard I had been issued, stretch out next to her and her dog, and we'd fiddle with our menu or grapple with the despair and bitterness of having discovered that none of the cloth napkins matched. Lou couldn't come, and two of the good plates chipped. We agreed: It was a nightmare.

Her brother Andy was in town, though, as was her great assistant Betsy Moon, with her boyfriend. Jim Hightower and his wife, DeMarco, could be there.

It was really not an ideal weekend for a party, what with her being close to death, unable to walk much anymore or to stay awake. Also, she had to get chemo that morning. But I ask you -- what are you going to do?

Obviously, have the party. Everything she loved, one more time.

Her niece and nephew came."I don't have any children," she once wrote, "so I've decided to claim all the future freedom-fighters and hell-raisers as my kin." And she adored these two (although later we conspired to set the table so that they got the two chipped plates).

She was so excited about her party that she insisted I make place cards.

She slept a lot the day of the party. The chemo had knocked her for a loop. But she managed to work on her column a little. I Googled it just a moment ago. Here's what she wrote, "About the only politician out there besides Bush actively calling for a surge is Sen. John McCain. In a recent opinion piece, he wrote: 'The presence of additional coalition forces would allow the Iraqi government to do what it cannot accomplish today on its own -- impose its rule throughout the country. By surging troops and bringing security to Baghdad and other areas, we will give the Iraqis the best possible chance to succeed.' But with all due respect to the senator from Arizona, that ship has long since sailed. A surge is not acceptable to the people in this country -- we have voted overwhelmingly against this war in polls (about 80 percent of the public is against escalation, and a recent Military Times poll shows only 38 percent of active military want more troops sent) and at the polls. We know this is wrong. The people understand, the people have the right to make this decision, and the people have the obligation to make sure our will is implemented."

She got up from bed a few times to sit with me at the table. We drank tea and ate dried cherries and told each other stories. She was such a performer, with that marvelous Texas Hill Country accent that used to get stronger with every drink. But she and I had both been sober for some time by the end of her life. Her stories were precisely delivered, and her face so in control, as if she had trained with Marcel Marceau. I can see her looking over the tops of her reading glasses -- mugging, mimicking, liberally using old lines even as she pulled new whoppers out of the ether. Sometimes being with her was like watching fireworks on a small scale. Finally, she'd lean forward to deliver the money line, while fluttering her eyelids, then throw herself backward into her chair, roaring up at the ceiling, as if she were laughing at God.

Then she'd lean forward again, hoping that you might have a story, too, and get the log rolling again.

I swear, she might be the only person who can help get me through these last 33 nerve-wracking days. She would not have taken Sarah Palin lying down. She would laugh her ass off, and do something every day to defeat McCain. She would eat with beloved friends, put people together who simply had to know one another, who might together be able to throw a wrench in McCain's Rube Goldberg machine. She makes me want to move around on the floor with her one more time, standing on her shoes like I used to with my father when I was a little girl, and he was teaching me how to waltz.