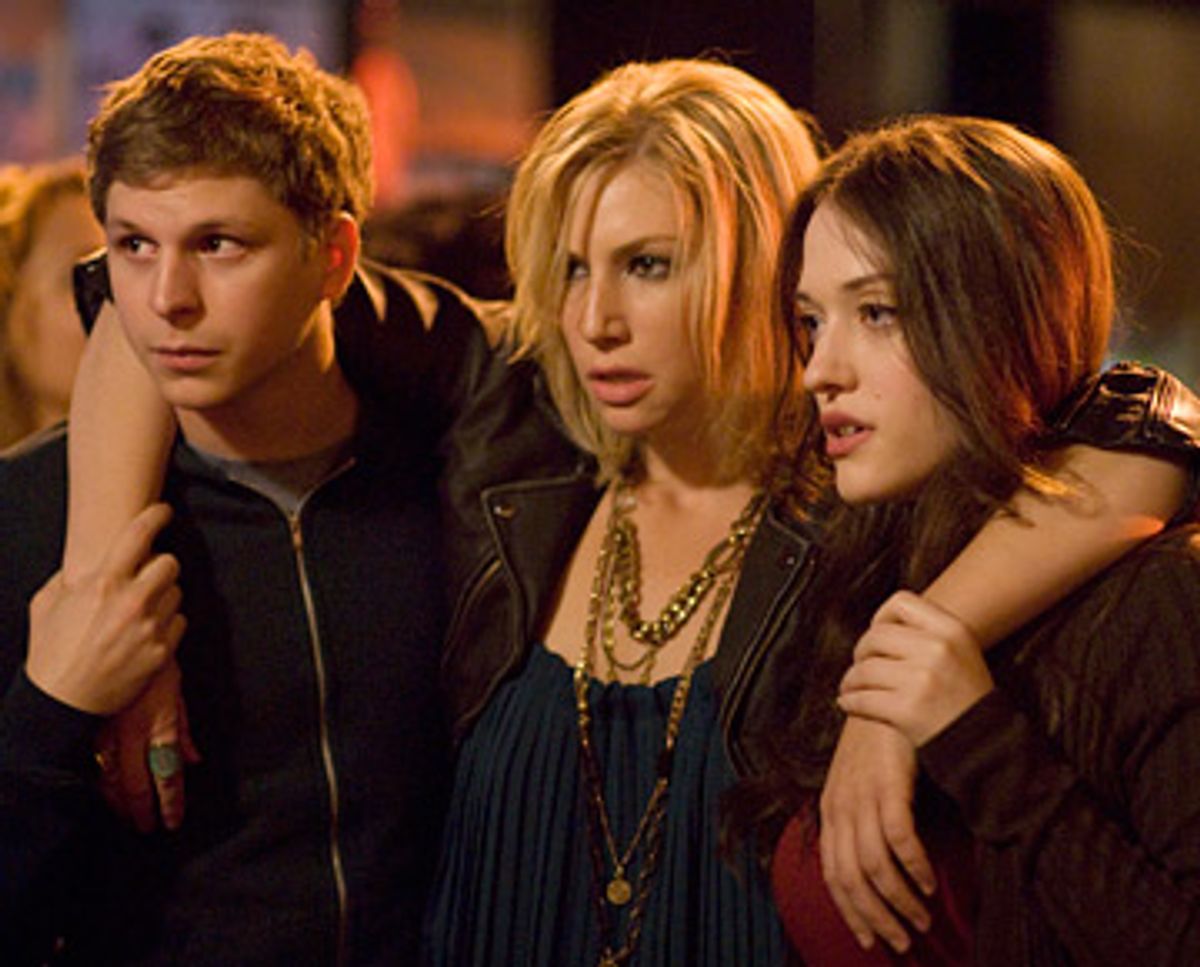 Sometimes a movie is so liberally brushed with an aura of sweetness -- or at least with the intention of sweetness -- that you want to overlook its flaws. "Nick and Norah's Infinite Playlist" -- the second feature from Peter Sollett, who made a lovely debut in 2003 with the coming-of-age picture "Raising Victor Vargas" -- has a lot going for it, chiefly two appealing lead actors, Michael Cera and Kat Dennings. And although the movie does contain a few gratuitous, strained gross-out gags, Sollett has deliberately gone for a low-key vibe: The editing is leisurely instead of fast and choppy, and many of the jokes roll at us sideways instead of head-on.

"Nick and Norah" is so almost-there that I can't help fixating on the movie it might have been. The movie itself seems to be locked in a kind of adolescence; it never quite blossoms into maturity, into a fully rounded whole. Cera stars as the Nick of the title, a New Jersey kid who's been left lovelorn now that his sexy fireball of a girlfriend, Tris (Alexis Dziena), has broken up with him. He's been plying her with mix-CDs (what we older folks, back in the day, used to call mix-tapes) of his favorite music, hoping she'll like it too. He doesn't know that she's been discarding the discs, and that they've been picked up by one of her friends, Norah (Kat Dennings). Norah doesn't know who made the CDs, but she recognizes that whoever put them together is her soul mate, in terms of musical tastes, at least. When she finally meets Nick, performing with his band in Manhattan -- he's the only straight member of a Queercore outfit called the Jerk Offs -- she's not exactly taken with him. But in order to save herself from an awkward situation, she does persuade him to be her boyfriend for five minutes -- five minutes that just might stretch into five hours, or beyond.

Nick and Norah set off on an odyssey through nighttime New York, looking for the location of a secret performance by one of their favorite bands (a fictional group called Where's Fluffy). They encounter numerous misadventures and misfires on the way, many of them involving Norah's friend Caroline (Ari Graynor, in a loose-jointed, endearing performance), a girl who's gotten a little too drunk for her own good. There's also the fact that Nick and Norah -- despite the fact that they share a love for music by the likes of Vampire Weekend, Band of Horses and We Are Scientists -- don't immediately get along. In fact, they barely get along at all, and intermittent bickering gives the movie a rambling, uncertain quality.

It's hard to know where to put the blame. The script was written by Lorene Scafaria, adapted from the young-adult novel by Rachel Cohn and David Levithan, and the idea of two bridge-and-tunnel kids exploring nocturnal New York certainly has potential. The music is well chosen and well used, particularly in a dreamy, mournful sequence set to a ballad by the U.K.-based singer-songwriter Richard Hawley.

But overall "Nick and Norah" just comes off as listless and unfocused, and sometimes its intentions and motives are irksomely unclear. The movie features several gay characters who act as -- you should pardon the expression -- fairy godfathers, determined to bring Nick and Norah together. The problem is that these characters seem perfectly content to behave like stereotypes, and they're lumped together a little too carelessly: They don't really emerge as individuals. I think their mere presence in the movie is the result of a generous impulse: The point, I think, is that young people today aren't as hung up on labels of "straight" or "gay" as earlier generations were. But it's not enough just to have gay characters in your movie; you also have to give them something to do, and that's where "Nick and Norah" falls short.

There is, at least, some tentative chemistry between Cera and Dennings. Cera's Nick may be low-key and wide-eyed, but he's not a total doofus. He's sensitive and sophisticated in the ways that matter -- it's just that his gangly body hasn't yet caught on to the idea that he's a terrific catch. And Dennings, with her broad smile and flirtatiously heavy-lidded eyes, sure knows her way around a wisecrack -- in fact, her Norah is a little too good at slinging them, and she sometimes lets loose with a comment so clever and pointed that it's wounding. The uncertain parrying between Cera and Dennings is, from scene to scene, the best thing about "Nick and Norah's Infinite Playlist." The movie around them may not have enough shape, contrast and texture. But at least these characters are always moving forward, even if the only sure thing they've got to look forward to is dawn.