The dumbing down of the GOP

Why aren't more conservatives disgusted that their party nominated a person devoid of qualifications for the vice presidency (again)? 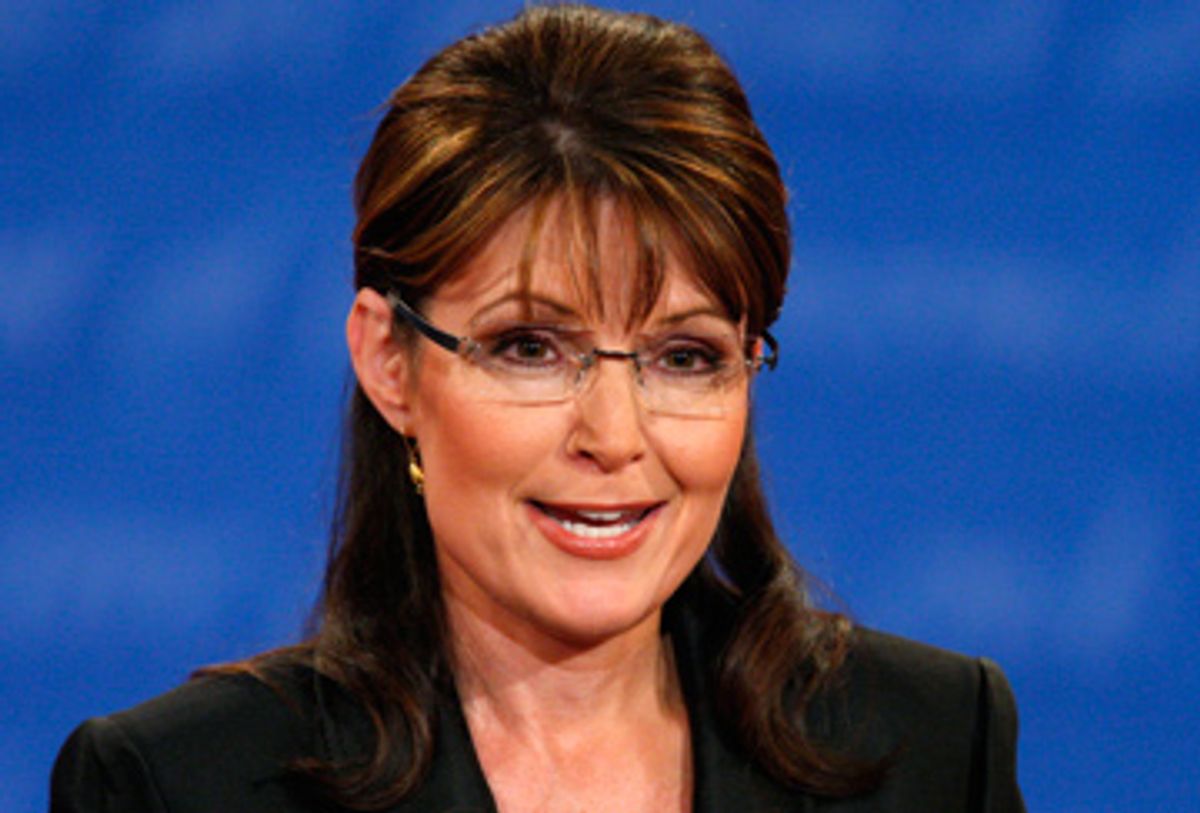 Sarah Palin's debate performance should signal the beginning of the end of her fad. But for the moment it is worth looking at the meaning of her nomination, without the protective varnish of what conservatives usually dismiss as political correctness.

Why should we pretend not to notice when Gov. Palin's ideas make no sense? Having said last week that "it doesn't matter" whether human activity is the cause of climate change, she said in debate that she "doesn't want to argue" about the causes. It doesn't occur to her that we have to know the causes in order to address the problem. (She was very fortunate that moderator Gwen Ifill didn't ask her whether she truly believes that human beings and dinosaurs inhabited this planet simultaneously only 6,000 years ago.)

Why should we ignore her inability to string together a series of coherent thoughts? As a foe of Wall Street greed and a late convert to the gospel of government regulation, along with John McCain, Palin promised to clean up and reform business. But when her programmed talking points about "getting government out of the way" and protecting "freedom" conflicted with that promise, she didn't notice.

Why should we give her a pass on the most important issues of the day? Supposedly sharing the fears and concerns of the average families who face the burdens of mortgages, healthcare and economic insecurity, Palin simply refused to discuss changes in bankruptcy law and proved that she didn't know the provisions of McCain's healthcare plan.

All the glaring defects so blatantly on display in her debate with Joe Biden -- and that make her candidacy so darkly comical -- would be the same if she were a hockey dad instead of a "hockey mom." In fact, the cynical attempt to foist Palin on the nation as a symbol of feminist progress is an insult to all women regardless of their political orientation.

There was a time when conservatives lamented the dumbing down of American culture. Preservation of basic standards in schools and workplaces compelled them -- or so they said -- to resist affirmative action for women and minorities. Qualifications mattered; merit mattered; and demagogic appeals for leveling were to be left to the Democrats.

Actually, the Palin phenomenon is the culmination of a trend that can be traced back to Dan Quayle, the undistinguished Indiana senator whose elevation onto the Republican ticket in 1988 had nothing to do with intellect or experience and everything to do with the youthful appeal of a handsome blond frat boy. (That was how Republican strategists thought they would attract female voters back then, which must be why they believe Palin represents progress.) Quayle too was unable to articulate, let alone defend, the policy positions for which he was supposed to be campaigning. He too had to undergo the surgical stuffing of stock phrases into his head as a minimal substitute for knowledge and thought. And in the same sad way, he too benefited from the drastically reduced expectations applied to anyone whose inadequacy is so obvious.

Quayle deserved more pity than scorn, however, because he seemed to know that he was fighting far above his weight class. Palin evokes no such sympathy, with her jut-jawed, moose-gutting confidence in her own overrated "common sense" and her bullying insistence that only "elitists" would question her expertise.

As Biden showed quite convincingly when he spoke about his modest background and his continuing connection with Main Street, perceptive, intelligent discourse is in no way identical with elitism. Palin's phony populism is as insulting to working- and middle-class Americans as it is to American women. Why are basic diction and intellectual coherence presumed to be out of reach for "real people"?

And why don't we expect more from American conservatives? Indeed, why don't they demand more from their own movement? Aren't they disgusted that their party would again nominate a person devoid of qualifications for one of the nation's highest offices? Some, like Michael Gerson and Kathleen Parker, have expressed discomfort with this farce -- and been subjected, in Parker's case, to abuse from many of the same numbskulls whom Palin undoubtedly delights.

The ultimate irony of Palin's rise is that it has occurred at a moment when Americans may finally have grown weary of pseudo-populism -- when intelligence, judgment, diligence and seriousness are once again valued, simply because we are in such deep trouble. We got into this mess because we elected a man who professed to despise elitism, which he detected in everyone whose opinions differed from his prejudices. That was George W. Bush, of course. Biden was too polite and restrained to say it, but the dumbing down is more of the same, too.