Imagine if the Obamas had hooked up with a violently anti-American group in league with the government of Iran. 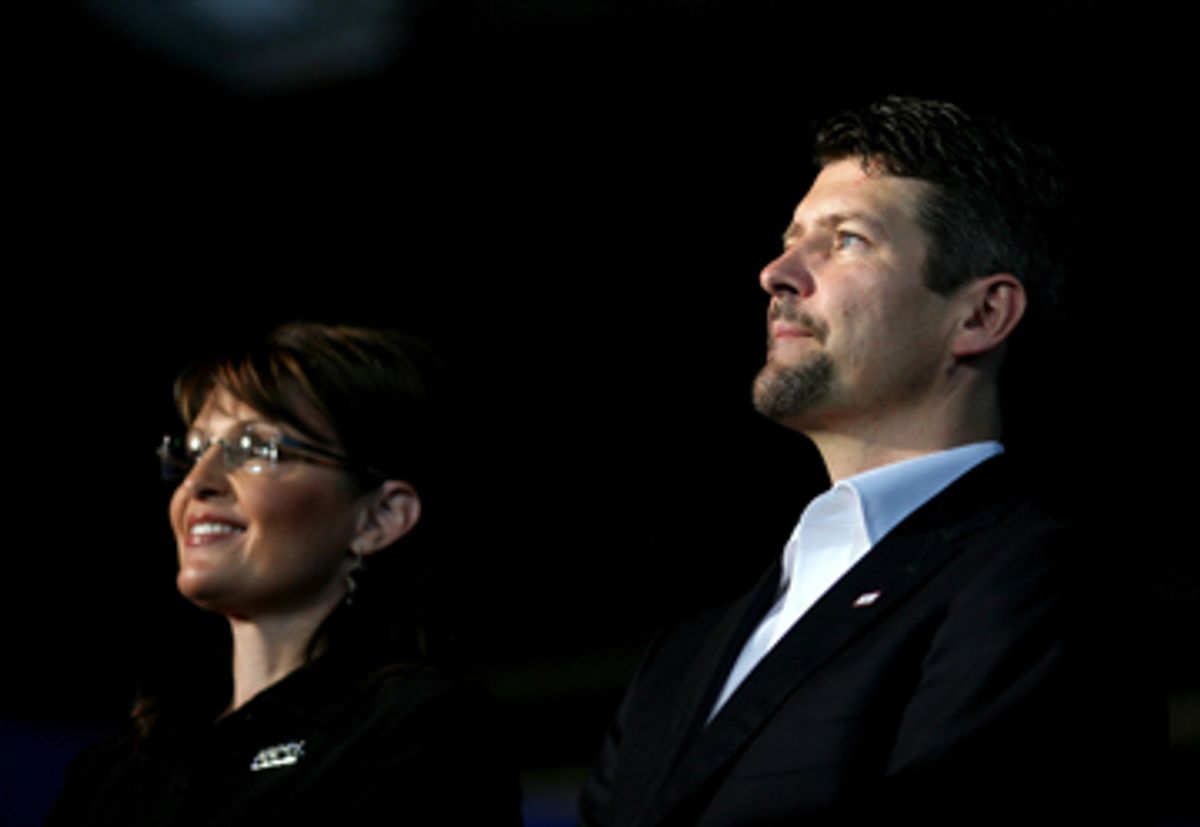 "My government is my worst enemy. I'm going to fight them with any means at hand."

This was former revolutionary terrorist Bill Ayers back in his old Weather Underground days, right? Imagine what Sarah Palin is going to do with this incendiary quote as she tears into Barack Obama this week.

Only one problem. The quote is from Joe Vogler, the raging anti-American who founded the Alaska Independence Party. Inconveniently for Palin, that's the very same secessionist party that her husband, Todd, belonged to for seven years and that she sent a shout-out to as Alaska governor earlier this year. ("Keep up the good work," Palin told AIP members. "And God bless you.")

AIP chairwoman Lynette Clark told me recently that Sarah Palin is her kind of gal. "She's Alaskan to the bone ... she sounds just like Joe Vogler."

So who are these America-haters that the Palins are pallin' around with?

Before his strange murder in 1993, party founder Vogler preached armed insurrection against the United States of America. Vogler, who always carried a Magnum with him, was fond of saying, "When the [federal] bureaucrats come after me, I suggest they wear red coats. They make better targets. In the federal government are the biggest liars in the United States, and I hate them with a passion. They think they own [Alaska]. There comes a time when people will choose to die with honor rather than live with dishonor. That time may be coming here. Our goal is ultimate independence by peaceful means under a minimal government fully responsive to the people. I hope we don't have to take human life, but if they go on tramping on our property rights, look out, we're ready to die."

This quote is from "Coming Into the Country," by John McPhee, who traipsed around Alaska's remote gold mining country with Vogler for his 1991 book. The violent-tempered secessionist vowed to McPhee that if any federal official tried to stop him from polluting Alaska's rivers with his earth-moving equipment, he would "run over him with a Cat and turn mosquitoes loose on him while he dies."

Vogler wasn't just a blowhard either. He put his secessionist ideas into action, working to build AIP membership to 20,000 -- an impressive figure by Alaska standards -- and to elect party member Walter Hickel as governor in 1990.

Vogler's greatest moment of glory was to be his 1993 appearance before the United Nations to denounce United States "tyranny" before the entire world and to demand Alaska's freedom. The Alaska secessionist had persuaded the government of Iran to sponsor his anti-American harangue.

That's right ... Iran. The Islamic dictatorship. The taker of American hostages. The rogue nation that McCain and Palin have excoriated Obama for suggesting we diplomatically engage. That Iran.

AIP leaders allege that Vogler, who was murdered that year by a fellow secessionist, was taken out by powerful forces in the U.S. before he could reach his U.N. platform. "The United States government would have been deeply embarrassed," by Vogler's U.N. speech, darkly suggests Clark. "And we can't have that, can we?"

The Republican ticket is working hard this week to make Barack Obama's tenuous connection to graying, '60s revolutionary Bill Ayers a major campaign issue. But the Palins' connection to anti-American extremism is much more central to their political biographies.

Imagine the uproar if Michelle Obama was revealed to have joined a black nationalist party whose founder preached armed secession from the United States and who enlisted the government of Iran in his cause? The Obama campaign would probably not have survived such an explosive revelation. Particularly if Barack Obama himself was videotaped giving the anti-American secessionists his wholehearted support just months ago.

Where's the outrage, Sarah Palin has been asking this week, in her attacks on Obama's fuzzy ties to Ayers? The question is more appropriate when applied to her own disturbing associations.