Untangling the mess created by mortgage-backed securities and their derivatives will be complicated and very, very expensive. 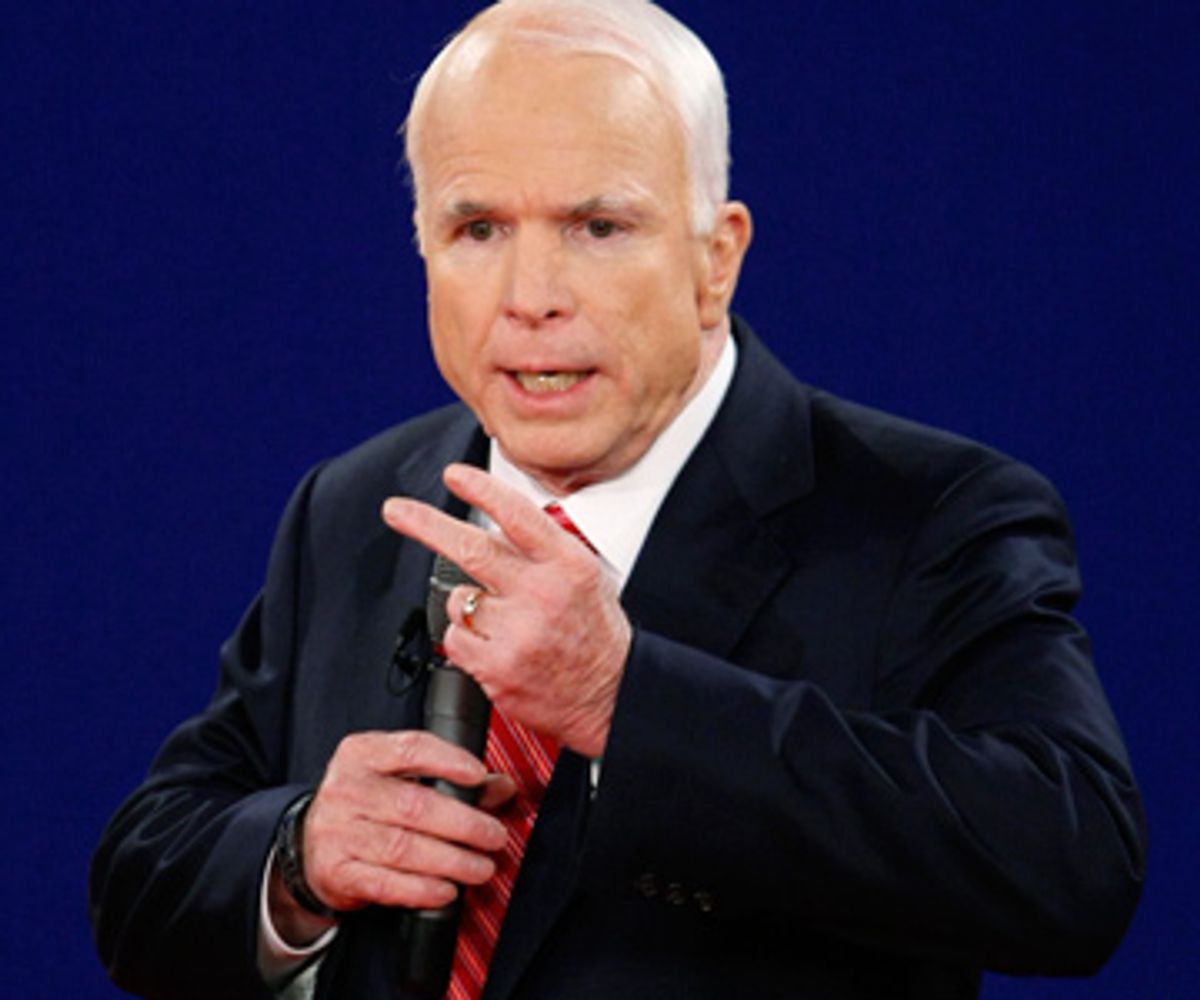 Sen. John McCain answers a question during his debate with Sen. Barack Obama at Belmont University in Nashville, Tenn., Oct. 7, 2008.

John McCain's campaign has entered strange territory. On the stump, he and his ticket-mate launch blast after blast of character assassination, summoning up the last dregs of the culture wars of eons past in a desperate attempt to rein in the surging Obama campaign. But in Tuesday night's debate, he pulled a remarkably liberal rabbit out of his hat. His "American Homeownership Resurgence Plan" is a straight-out government bailout of homeowners stuck with mortgages that they can no longer afford. The base is not amused.

McCain's plan to buy up mortgages and refinance them at the current value of homes represents a dramatic shift from his position in March, when he said in a speech that "it is not the duty of government to bail out and reward those who act irresponsibly, whether they are big banks or small borrowers," and that "any assistance must be temporary and must not reward people who were irresponsible at the expense of those who weren't." Democrats were also quick to note that the proposal is not new: In fact, there is a provision in the Emergency Economic Stabilization Act of 2008 that expressly allows the government to restructure the mortgages that it purchases.

In theory, the plan addresses the right problem. Until the wave of foreclosures that is continuing to depress home prices is halted, the fundamentals of the American economy have no chance of being strong. But McCain's own flip-flops and Democratic assertions aside, the major drawback to the Resurgence is that, because of how mortgages are routinely repackaged into securities, any scheme to restructure them runs into serious obstacles. In recent weeks I've mentioned the work of Georgetown law professor Adam Levitin, a specialist in bankruptcy and commercial law who has been examining exactly this issue. Levitin's position is that the repackaging of mortgages into residential mortgage-backed securities (RMBS), and their further slicing and dicing into collateralized debt obligations (CDOS), have fractured the ownership of the original mortgages and redistributed them so widely that the government's hands are tied. To be able to modify the underlying mortgages, the government would need to own a substantial, possibly two-thirds majority, of the securitization pools into which the mortgages have been transformed. That will be difficult to achieve and exorbitantly expensive.

I e-mailed Levitin this morning for his opinion. His answer was blunt.

The McCain plan cannot work. The vast majority (80 percent+) of residential mortgages are securitized. The government cannot purchase mortgages directly out of securitization pools. There are a limited number of ways to actually get around the securitization problem:

1. Refi the mortgages directly, which would involve paying 100 percent of face value.

2. Buy up ALL the RMBS and CDOs and CDO2s, which will be prohibitively expensive and will result in paying close to face value.

3. Take the mortgages from the securitization trusts via eminent domain -- and pay fair value.

4. Permit modification of the mortgages in bankruptcy, or

5. Pass Gold Clause type legislation that changes MBS holders' rights in a way that will allow modification of the mortgages. There are several ways to do this. It might not ultimately be Constitutional, but I doubt any judge would issue an injunction, so by the time there was a final ruling, the matter would be over and done and the worst case is that the government would have to pay out some (maybe a lot) of money.

Because the McCain plan doesn't recognize the (admittedly complex) problems created by securitization it is simply unworkable. At best it will help a few homeowners, but Treasury is already authorized to do that.

The McCain plan does not get into the specifics that Levitin outlines above. Of course, neither does the bailout plan, nor do any of the Democrats who are saying that the bailout plan already allows the government to restructure mortgages.

But the easiest and quickest way to get real help to homeowners is Point 4 -- permitting bankruptcy judges to make modifications of mortgages. But that proposal is being resisted so fiercely by the banking and securities industry that it was the first thing that Democrats dropped from their version of the bailout, in the face of strong Republican resistance.