Zooming to the future

What the cars we buy say about our society. 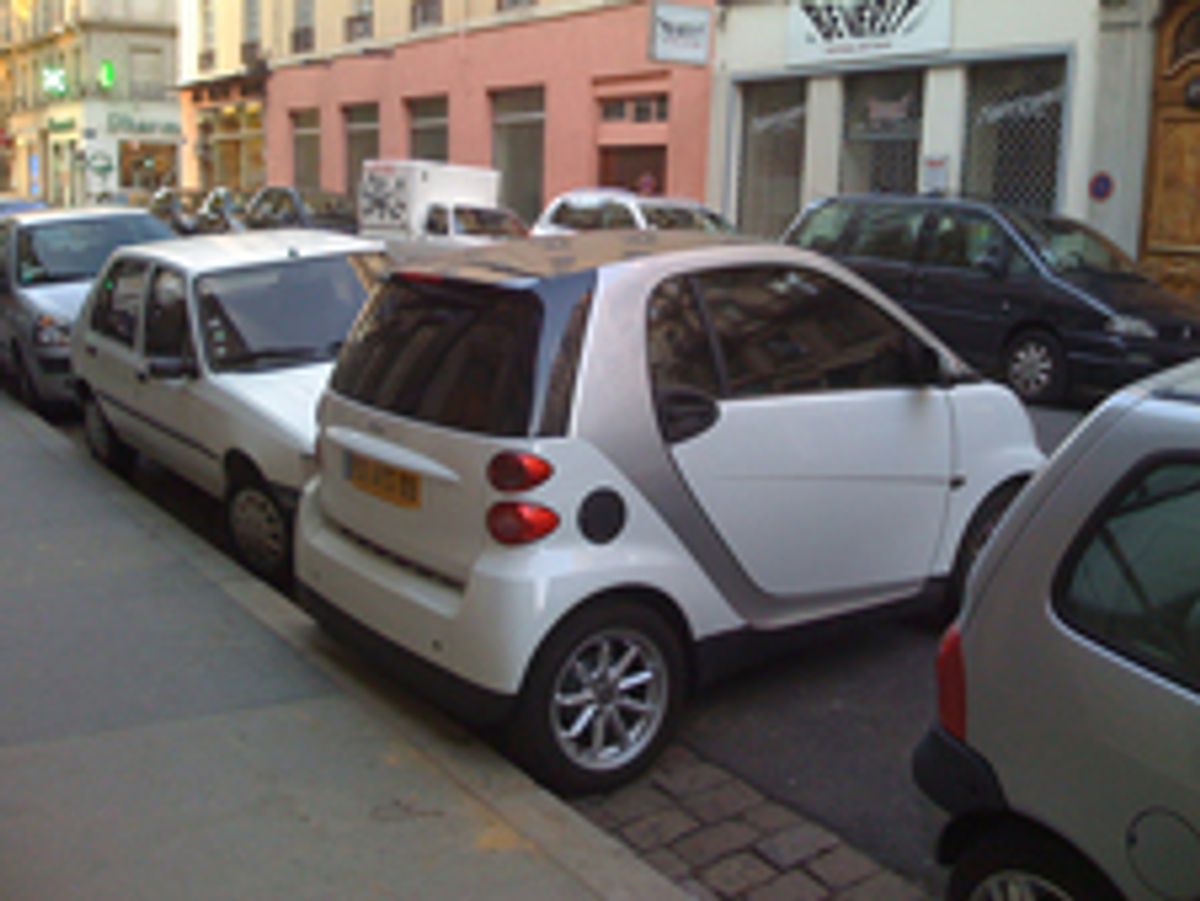 Since I've been in France, I've seen tons of Smart cars running around. I'd say they're about as popular here as Priuses are in the San Francisco Bay Area. Unfortunately, Smart cars haven't quite taken off in the United States. Last week, Daimler reported that it has sold only about 18,000 of them in the U.S., probably at least partly because there are currently dealerships in just 35 of the 50 states.

It's sorta funny to see how technologies -- in this case cars -- evolve in various environments and what they say about the markets that they're trying to serve. The Smart car, for example, is perfect for those hard-to-find parking places on tight European streets. (Sadly, this perpendicular parking technique is illegal in large parts of the U.S.) If American SUVs were designed for big, straight, well-paved American highways running on cheap gas, these cars were designed for the completely opposite market: tight parking spaces, high gas mileage, minimal trunk space. Basically, it's the modern European version of the Fiat 500 and the Citroën 2CV -- tiny, iconic and freakin' cute. Oh, and it's been available in Europe for the past decade.

Conclusion? Europeans have known for some time that tiny, more fuel-efficient cars are the way to go.

In the U.S., obviously, the days of cheap gas are over. Many (my parents included) have long sold off their SUV (Ford Expedition) for a hybrid (Toyota Prius). Clearly, the present and foreseeable future is in at least hybrid cars, if not electric or multifuel cars. This gas-guzzler nonsense is so 20th century. So you would think that the American government would be trying to push us toward cleaner cars. Indeed, as part of the Energy Policy Act of 2005, the IRS has since provided a tax credit for various hybrid cars as a way to incentivize their purchase price.

As if the prices at the pump weren't incentive enough, since the bailout bill was signed into law earlier this week, Congress has now provided a $7,500 reason to go nontraditional. Even though the first Volt won't hit showroom floors for two more years, the Volt qualifies for the maximum tax credit of $7,500 because of its 16 kWh battery. (Not surprisingly, the bill was met by opposition from Toyota, as the Volt is the only car in the near future that will be able to meet this maximum tax credit -- the Toyota Prius has only a 1.3 kWh battery.)

So what does this tell us? That we're moving too slowly in buying hybrids as a nation, and that Washington (and Detroit) is just now starting to get it.

But more than just fuel-efficient cars are on the horizon in Europe and the U.S. Don't forget about the iconic Tata Nano, announced earlier this year in India. While none are for sale just yet, my buddy Scott Carney just completed a great piece in a recent issue of Wired about the Nano, which will be priced at about $3,000, affordable to many of the rapidly growing middle classes around the developing world.

And here's the great problem with the Nano, writes Carney:

The global market for the Nano and similarly low-priced cars could be immense -- the World Bank counts more than 800 million people who earn between $3,600 and $11,0000 annually. In India, the new vehicle could change the taxi business overnight and energize a cadre of small-time entrepreneurs by providing new levels of mobility, carrying capacity, and social status. At the same time, the prospect of a flood of additional cars terrifies city planners and environmentalists. Metropolises throughout the developing world are expanding at breakneck speed. In many places, the crumbling roads are already crammed beyond capacity. Traffic fatalities are on the rise, and air pollution threatens to choke remaining pockets of green space. Sure, a single Nano is a step toward independence, security, and social mobility — but to some observers, millions of Nanos spell apocalypse.

In other words, Tata Motors is interested in making a buck and providing greater social mobility -- for better or for worse -- to its citizenry, and seems to care little for the fact that the average speed on Mumbai city streets is 9 mph. (In other news, last month, production on the Nano ceased indefinitely because local farmers in West Bengal -- where the plant is located -- have begun major protests against Tata.)

And in other automotive news from the world this week, Iran just announced that the country's largest car manufacturer, Iran Khodro, will be releasing a car next year designed with features specifically for women.

These include an automatic gearbox, electronic parking aids, a navigation system and a jack designed to make it easier to change a wheel, suggesting that women drivers lack the mechanical competence of their male counterparts. Alarms may also be installed to warn of flat tyres. The vehicle will be painted in soft "feminine" colours and include interior designs tailored to women's tastes. There will also be audiovisual entertainment systems for child passengers.

In other words, in Iran, it's more important for women to drive a car that has "cheerful and attractive colors" and is "comfortable" than for a woman to work or to travel abroad without her husband's permission. Right. Glad to know the Iranian government has its priorities straight.