You'll now be able to easily spot a car. 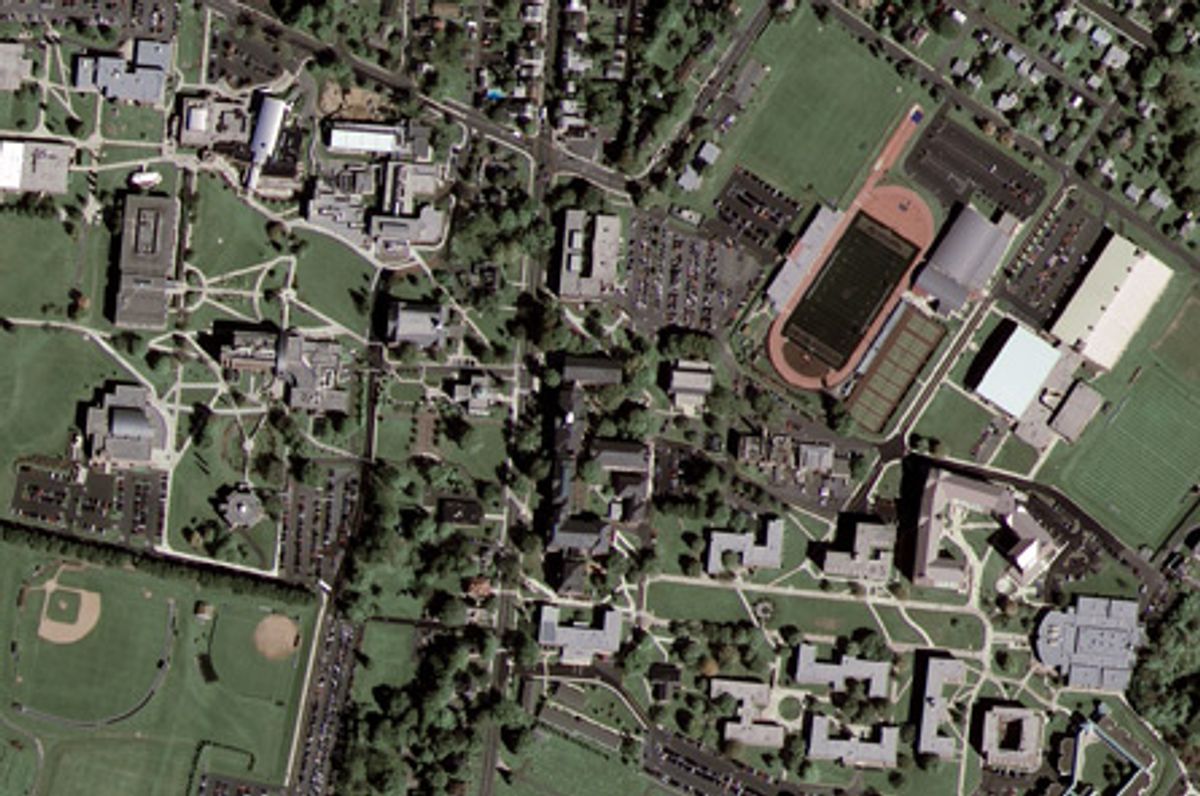 Man, Google Maps and Google Earth are about to get that much sweeter.

Wednesday, the public got its first taste of the new GeoEye-1 satellite, the most accurate mapping satellite ever. GeoEye, the company behind the satellite of the same name, just released this photo, taken two days ago over Kutztown University in Pennsylvania.

The satellite, which was launched on Sept. 6, will take photos at 0.41 meter resolution, meaning it can clearly see anything that size or bigger. Its images are being sold to Google as part of an exclusive deal that makes Google the sole online mapping site that can use the images. However, because of government restrictions, Google will be allowed to use data only at the 0.50 meter range. Currently, the best images on Google Maps are in the 0.60 meter (60 cm) range, explains Kate Hurowitz, a spokeswoman for Google.

As she wrote to me in an e-mail:

Most of the commercial satellite imagery has a resolution of 60 cm, which means one could clearly see rooftops. The GeoEye-1 commercial imagery will improve upon this resolution by about 25 percent. At a resolution of 50 cm, one would be able to see vehicles.

More importantly, the improved resolution means that users will be able to map the location of an object within three meters to its true location on the surface of the Earth. This level of accuracy makes it much easier for users to annotate their world around them and share those contributions with others.

Unfortunately, Google is a bit more coy as to when it will be incorporating this new data into its new online products. Hurowitz says there's no "specific date" as to when this new mapping data will be available in Google Maps and Google Earth.

According to Popular Science, the satellite is controlled by operators at one of four ground stations in Alaska, Virginia, Norway and Antarctica. Once the target is established, the on-board military-grade GPS units make it possible to precisely locate the position of a particular object to within 9 feet, or about 3 meters. The magazine also reports that these improvements make the GeoEye-1 about one and a half times as accurate as previous generations of satellites.

Improved satellite images allow for a much better understanding of the orientation and geographic placement of an environment. Or put another way, better data + maps = crazy delicious.

Plus, now I'll be able to have a much better view of Area 51 or Niagara Falls or loads of other spots.