The struggling Republican looked as cranky and erratic as he does in harsh Obama ads. 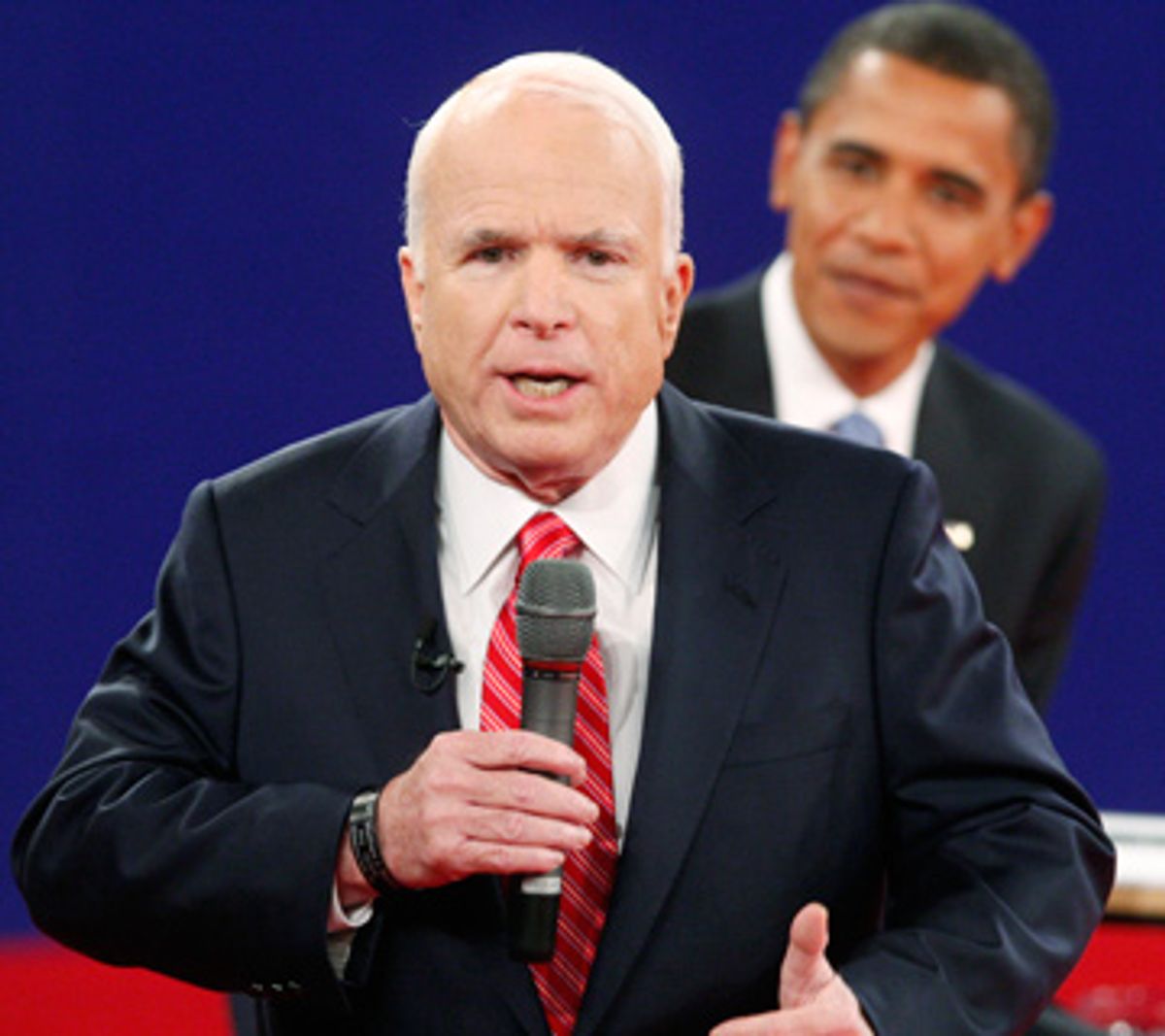 Barack Obama dominated this debate from the very first question John McCain fielded directly, when he condescended to the African-American questioner, a young man named Oliver, who asked how the $700 billion rescue plan passed last week would help the average American. McCain first implied that Oliver and other regular voters wouldn't know that much about Fannie Mae and and Freddie Mac, then went into the misleading Fannie/Freddie claims Andrew Leonard broke down here. Then McCain told Oliver that his plans would "help Americans like Allen ... stay in their home." Allen? Allen was the nice older white man who asked the first question. So what about Oliver? Did he not matter? Was McCain confused?

Obama came up and broke down exactly how the rescue plan will theoretically (ignore the stock market) help the economy and American voters. Much of the rest of the night went like that. After rather inexplicably telling the audience that "energy independence" was the most important step the country can take to quickly solve the current economic crisis (when most experts agree energy independence will take decades), McCain a few moments later told moderator Tom Brokaw he couldn't pick a priority among energy, healthcare reform and fixing entitlement programs. It was like he wasn't tracking his own answers.

The conventional wisdom on debates drives me crazy, but it's probably true tonight: If the candidate who's trailing doesn't decisively win, he or she loses. By that standard, McCain lost, but he lost even without that cliché. He was shooting for big points on his "plan" to buy back troubled mortgages; the trouble is, the rescue plan already includes that power, and the Obama camp says Obama lobbied to include it in the package. Even on his supposed strong suit, foreign policy, he was erratic, rambling at one point, "I'll get Osama bin Laden, my friends. I'll get him. I know how to do it!"

I blogged on this earlier, but I knew Sarah Palin lost the debate when she failed to acknowledge Joe Biden's pain over losing his family. McCain's standout gaffe wasn't so awful or inhuman, but it was equally tin-eared. He called Obama "that one." Really. Asking if the audience knew who voted for the Bush-Cheney energy bill, he pointed at Obama: "That one."

My first reaction was that it was slightly racist -- depersonalizing African-Americans has a long rhetorical history. But I think it was more like something a cranky baby sitter would say -- Angry Uncle Joe, or Mr. Wilson. "You know who broke the coffee table? That one." He made it worse by either deliberately failing to shake Obama's hand at the end, or at best, forgetting to.

Lots of people said the town hall format would help McCain but it didn't; it made him seem more cranky and uncomfortable with Obama. The audience didn't favor anyone; were they full-body Botoxed? Not only did they not clap or cheer; nobody smiled; nobody seemed to move a muscle. It was hard to watch.

Time is running out for John McCain, and that looks good for Barack Obama. Or as James Carville just said, "You can call the dogs in, wet the fire and leave the house." A few moments later, David Gergen countered: "It's too early to declare victory because Barack Obama's black." That's stark. The CNN instant poll just called it for Obama, 54-30. We'll bring you more reaction soon.