Russell and Leo team up in this overly intricate indictment of the war on terror. 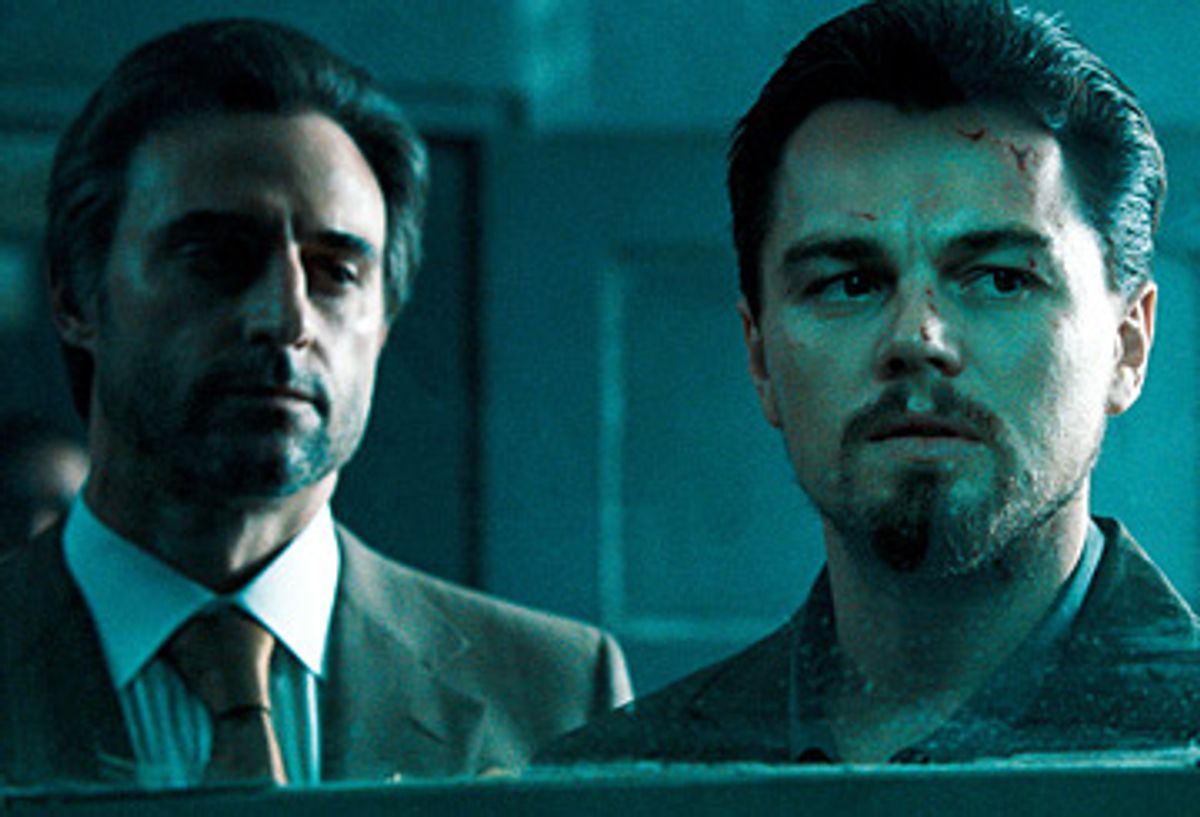 You've already seen Ridley Scott's "Body of Lies," even if you think you haven't. A random sampling of scenes might include a bomb exploding in some busy big-city street (the culprits are Islamic fundamentalists, natch), a couple of white CIA guys spouting the usual streams of gibberishy expository dialogue (one of these might be played by Russell Crowe, decked out in a suitably official-looking brush cut), and plenty of helicopter shots of Humvee-type vehicles rambling over rugged terrain, possibly accompanied by a title reading "Amman, Jordan, 13:40" -- or something like that. Add Leonardo DiCaprio, as a fluent-in-Arabic CIA operative in a scraggly beard -- this makes it easier for him to pass himself off as an official resident of the Middle East, when necessary -- and you've got a movie that works so hard to be politically topical and morally relevant that you might be fooled into thinking it actually means something.

It doesn't. "Body of Lies" is excessively intricate and extremely dull, the latest example of a filmmaker giving us a disjointed, overlong movie that's unnecessarily confusing to follow: It's all a ruse to get us to believe he's giving us some deep truth. In "Body of Lies" -- adapted, by William Monahan, from a novel by journalist David Ignatius -- Crowe plays Ed Hoffman, a thick-waisted, middle-aged CIA veteran who has a telephone receiver permanently affixed to his ear; day and night, he's drawling orders and directives to his underlings, even as he's doing random, everyday stuff like getting his kid to school or dropping him off at soccer practice. Meanwhile, DiCaprio's Roger Ferris is the guy on the ground, engaged in all sorts of top-secret spy shit even as he's living among people in the Middle East -- and actually seeing them as people, something his boss is incapable of. Monahan and Scott hammer this point endlessly: Scene after scene, we see Hoffman chattering away on his little headset, while Ferris is actually attempting to communicate with goat farmers who may or may not be terrorists. Crowe's character gets scraps of highfalutin dialogue along the lines of "Nobody's innocent in all of this," which he utters with an intentional lack of enthusiasm. Ed Hoffman doesn't really care who gets hurt, as long as America is kept safe for his cute little son and that soccer team.

One of the movie's messages, in case you haven't cottoned to it yet, is that the people who are "running" the war on terror are dangerously disconnected from humanity. "Body of Lies" is a liberal-minded movie in the sense that it casts a skeptical eye on that war. Somebody give Scott a medal. Giving him a few hours of your life is actually harder: "Body of Lies" is one of those pictures -- seemingly the only kind Scott now knows how to make -- in which the shots are pasted together with lots of fast, mindless cutting, resulting in a film with no discernible dramatic peaks and valleys; everything has to be a climax. The movie was shot, by Alexander Witt, in the drab gray-green-beige color palette that's now obligatory for allegedly serious movies set (or partially set) in the Middle East. The movie doesn't have a style; it merely follows a template, very much like Scott's last messy, gargantuan offering, "American Gangster."

You'll need a scorecard to keep track of the zillion and one characters here, which would be easier if Scott had actually given them some definition: There's an emerging terrorist leader named Al-Saleem (Alon Aboutboul), whom Ferris is desperately trying to capture, and Hani (Mark Strong), the head of Jordanian intelligence, a smooth operator who doesn't believe in torture, though he does know a thing or two about punishment. DiCaprio's Ferris also has a love interest, a pretty nurse named Aisha, who's played by Golshifteh Farahani, a popular actress in her home country of Iran. All of these actors give performances worthy of a much better movie than the one they're stuck in.

And DiCaprio, as always, gives the picture everything he's got; the results may be mixed, but the fault lies mostly with the movie around him. DiCaprio is, of course, a full-fledged grown-up, but his voice sometimes retains that thin, wavery quality it had when he was a young-adult actor. He uses it to his advantage here -- his occasional squeakiness works as a symbol of moral uncertainty.

Crowe's performance is another matter. Scott, to his credit, likes Crowe as an actor. The drag is that he doesn't always know how to use him. In "American Gangster," Crowe was doomed to play the dullard's role, that of your stock conscience-stricken cop, and he didn't do much to liven it up. Here, he's playing the fat-cat government guy who has been doing the same job for years and never really stops to think about how he does it. It's a thankless role, and Crowe lumbers through the performance like a clumsy bear. There's a sense of duty in his eyes, but not much else. Crowe's actorly blankness suggests that nobody had to think much during the making of "Body of Lies," and the resulting jumble bears that out. Scott might as well be playing his message over a loudspeaker: This is a complex, serious picture, folks, one worth paying attention to. If only it could keep us awake.