The federal government should go on a spending spree

Nothing expresses McCain's ignorance of basic economics like his call to freeze expenditures. Only massive government investment can help us now. 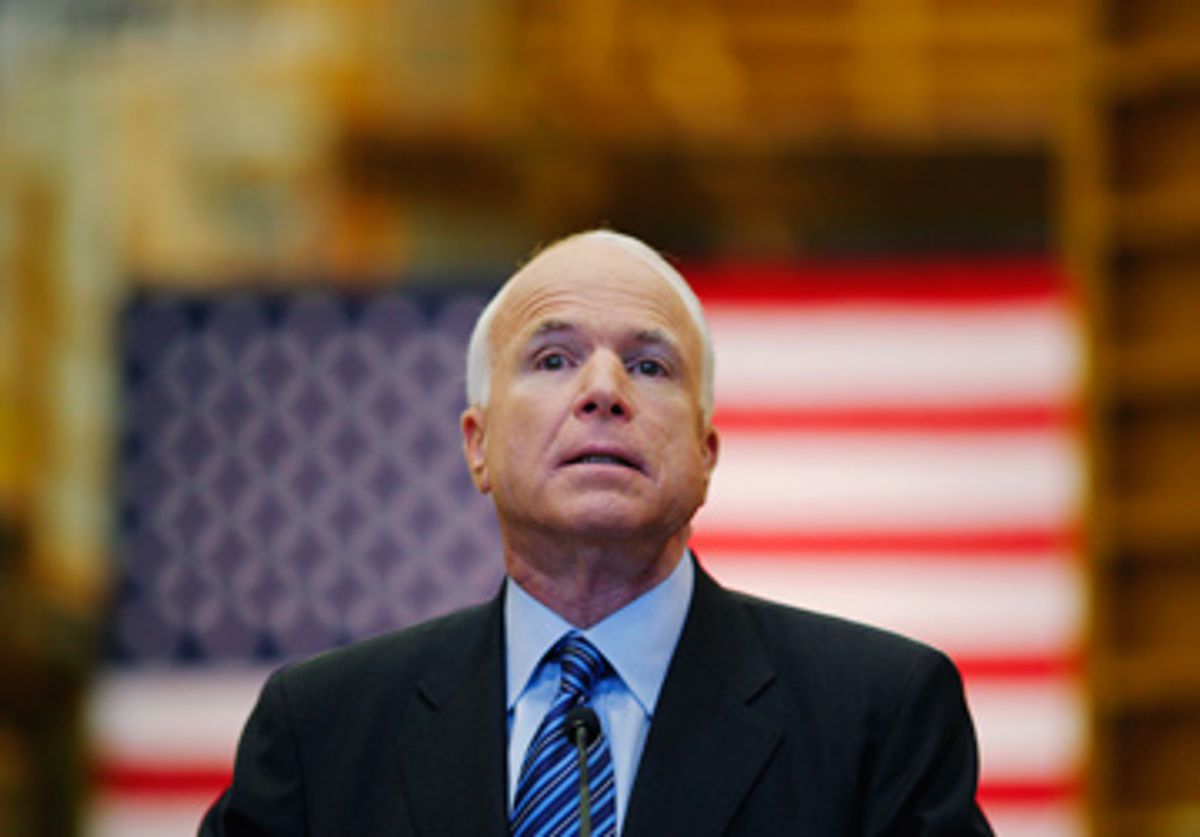 When the last presidential debate concluded -- in what already seems like a different era -- many observers complained that neither Barack Obama nor John McCain displayed the gravity and substance demanded by a world on the verge of severe recession or worse. But if we take McCain at his word, his misunderstanding of what must be done is worse than mere obtuseness.

The “freeze” in government spending promoted by him and his running mate, Sarah Palin, if they could somehow enact it, would be the single most destructive policy decision possible. As an idea, the freeze represents not only McCain’s confusion about basic facts -- how can he say he will freeze spending at the same time he proposes a $300 billion program to buy up bad mortgages? -- but the fundamental economic ignorance that he once so famously confessed.

McCain is not alone, of course. The pundits, editorialists and debate interlocutors who insist that the presidential candidates should tell us how they will cut federal spending to “balance” the $700 billion bank rescue and that they must focus their attention on cutting “entitlements” share his misunderstanding of the imperative that is now upon us.

That imperative is for government to spend, spend, then spend more.

Everyone now understands that the world is entering a new age whose contours are far from clear. But we have already seen old ideological shibboleths crumble, as the free-market fundamentalists of the Bush administration nationalize major companies, take over business lending as a federal function, and prepare to assume an ownership stake in much of the financial industry. Those abrupt decisions were far more radical than ramping up spending to fend off the ravages of recession -- and yet somehow our public mind-set remains haunted by budget balancing, as if our biggest problem were the deficit. News anchors tremble at the digital numbers flickering upward on the “deficit clock,” as if that were still our biggest problem.

As a nation, we are so accustomed to antigovernment rhetoric and prejudice against public expenditure that our politicians may block (or more likely just delay) the actions that could restore growth. For most of the past two or three decades, the Democratic leadership has been just as rigid about the need to reduce spending and balance budgets as the Republicans -- an obsession that is benign in periods of rapid growth, but very dangerous when the world economy is on the verge of crashing.

Sane and sensible responses to that danger are not easy to find in America’s mainstream media, even now. Journalists and broadcasters are too busy trying to add up the costs of what candidates have promised -- and to determine whether those promises are compatible with simultaneous promises to reduce spending and taxes.

On the other side of the Atlantic, however, a bracing realism has set in even on the traditional right. Consider the words of Samuel Brittan, a student of Milton Friedman's, a former advisor to the Thatcher government and one of Britain’s most eminent and enduring exponents of libertarian economics. He is now quoting John Maynard Keynes, the great 20th century economist whose theories of countercyclical spending have long been scorned by right-wing thinkers here and in Europe.

Friday, in fact, Brittan opens his Financial Times column, headlined “Keynes, Thou Should’st Be Living …,” with a long excerpt from a radio speech Keynes delivered in January 1931, which argued forcefully for massive government spending on public works to rebuild England. Brittan dismisses worries about spending at this moment of crisis and endorses strong coordinated action to increase the availability of credit, even if that might mean full nationalization of financial institutions.

“Already there are warnings that all such devices will increase budget deficits and debt,” he writes. “So be it. Maxims about debt that might be prudent for families can be the height of folly for governments. Keynes in the above quotation was writing at the onset of the Great Depression. But can we not act pre-emptively? I realize that people find it psychologically difficult to take on board a crisis that calls for more spending rather than belt-tightening.”

In the same edition of the F.T., the Lex column was even more blunt:

“It is time to get real. The western financial system is now, perhaps, stabilized. Banks are in retreat. Civil servants are taking the place of bankers … That leaves the most important policy objective: supporting economic growth … Governments’ ability to spend their way to growth is crucial.” With a curt nod to the business readership, Lex acknowledges that this advice “goes against purist free market theology.”

Indeed it does -- and it must sound like heresy to politicians such as McCain and Palin, who remain enthralled by a defunct and useless ideology. Barack Obama likewise makes implausible claims about budget balancing and spending reductions, but at least he has resisted demands to identify what parts of his platform he will abandon -- and has blasted the McCain freeze proposal as stupid and unfair.

There are places to cut spending, of course, beginning with the gigantic waste of the war in Iraq and most of the missile defense program. There are sensible ways to enhance revenue too, such as imposing windfall-profits taxes and closing down offshore tax havens.

There are also many wise ways to make the necessary spending constructive rather than wasteful. We have allowed the amazing public infrastructure left to us by the greatest generation to fall into terrible disrepair; we need a new broadband system that reaches into rural America and a new electrical transmission grid; and we need huge investments in energy and water conservation.

There could be nothing more ruinous to us now than the Republican notion of thrift.