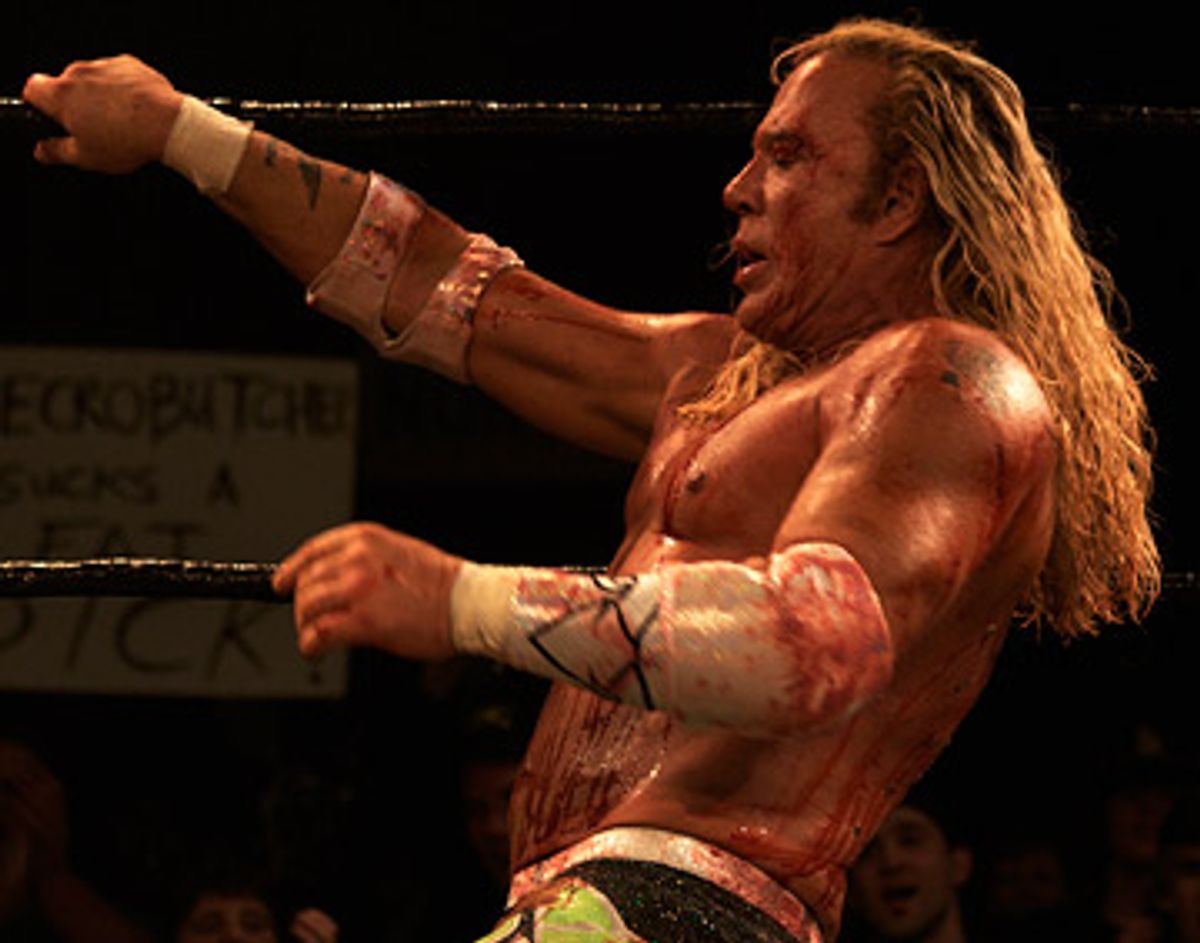 Darren Aronofsky's "The Wrestler" is a blunt, effective picture, which isn't quite the same as saying it's a good one. Aronofsky leapt onto the scene, an indie wunderkind, with the 1998 film "Pi." His 2000 follow-up, "Requiem for a Dream," about drug addicts poised to slip off the edge, may have been essentially a high-toned exploitation movie, but at least Aronofsky's dazzling, if somewhat gimmicky, effects came wrapped around a core of real emotion. In 2006, Aronofsky seemed to have lost it all with his New Age fever dream "The Fountain," a glum fantasy in which the Tree of Life plays a central role. (It's at least got more life than the movie's misused star, Hugh Jackman.)

So "The Wrestler" -- which closes the New York Film Festival on Sunday -- is a comeback of sorts for Aronofsky. That's fitting because, with it, he has also fashioned a comeback for Mickey Rourke, who gives an astonishing performance as Randy "The Ram" Robinson, a nearly washed-up wrestling star who had his heyday during the 1980s and has been struggling ever since. Randy lives in a trailer in New Jersey (at least when he's not locked out of it by his landlord for failing to pay the rent); he works part time at a grocery store, where he has to suffer the sarcastic zingers slung by his manager (played by stand-up comedian Todd Barry). On the weekends, he treks out to various school gyms and two-bit auditoriums to compete with other wrestlers -- although "compete" may not be the most accurate word. Among the finest moments in "The Wrestler" are some of the early ones, when we see Randy before a match, working out the night's moves with his fellow athletes (and once you see the hell these guys put their bodies through, you'll recognize that they are athletes). To give the audience the most exciting show possible, this brotherhood of bruisers decides which headlocks to throw in, determines when to do so and discusses the use of various props such as plate-glass windows and staple guns.

Some pretty rough stuff goes on in that ring, and Aronofsky doesn't flinch from showing it to us. In one sequence that's equal parts clever and cheap, he shows us the aftermath of a particularly brutal match (a victory for Randy), leaving us to believe we've been spared the gory details. Then he flashes back, intercutting highlights from the match -- this is when that staple-gun business comes in -- with shots of Randy's numerous wounds being sewn up and bandaged.

In between those scrappy, bone-crunching matches, Aronofsky, working from a script by Robert D. Siegel, delivers a fairly predictable, sentimental drama. As Randy faces the end of this career, he looks to reconcile with his estranged daughter, Stephanie (played, with far too much sulkiness, by Evan Rachel Wood), and woos the stripper he has long had a crush on, a flinty vixen whose stage name is Cassidy. (She's played by Marisa Tomei, who manages to present us with a moving, three-dimensional character, despite the fact that the picture gives her little to do.)

Aronofsky pulls all the usual strings in "The Wrestler." But in the end the movie works, maybe because the best things about it are things that Aronfsky isn't even conscious of. Aronofsky tapped Rourke for the role, making it clear that he wasn't going to put up with any of the actor's usual shenanigans. Rourke has been working fairly steadily over the past 20 years, but mostly -- with the possible exception of Robert Rodriguez's "Sin City" -- in movies no one has seen. Rourke has freely admitted that his partying hasn't had the greatest effect on his career, and Aronofsky made it plain that he was going to work Rourke, hard.

Whatever Aronofsky did -- or didn't -- do, Rourke's performance comes off beautifully. "The Wrestler" may not be the "best" Aronofsky movie in any technical sense. But the director clearly feels a great deal of tenderness toward his lead character, without ever emasculating him, and Rourke's performance blossoms and thrives within that affectionate framework. Rourke's face looks a little strange: He appears to have had some plastic surgery, which has made his features look both a little too fine and a little too blurred, compared with the Rourke we used to know. But that face hasn't lost any of its expressiveness. Rourke's performance will be praised, rightly enough, for the way he pushes his characterization of Randy right over the edge of our expectations. But what I love most about Rourke's performance are the small gestures, the little things he does probably without even thinking. The way, for example, Randy delicately places his hearing aid (this guy has clearly sustained so many injuries over the course of his career, you wonder how any of his parts still work) on the bedside table in his trailer, before going to sleep.

Like most great performances, Rourke's is the sum of a million little parts. There's the way Randy's face lights up when, trying to buy a surprise present for Stephanie, he seizes upon a shiny satin baseball jacket with an "S" embroidered on it. We already know his no-nonsense daughter would never wear this hideous garment. But Randy thinks the jacket is perfect, not just because it has her initial on it, but because it's the kind of flashy stagewear he gravitates toward himself. Rourke renders this fairly complicated example of dadthink with just the right mix of cluelessness and love. It's just one place in "The Wrestler" where Randy's meaty mug -- beaten down more by life than by anything that has happened in the ring -- tells us more about his character than a dozen lines of dialogue might. It's impossible to pin down what makes that beat-up face so beautiful. Aronofsky, to his credit, knew what becomes a legend most.