Step one in the battle against soaring food prices: Start your own recession garden. 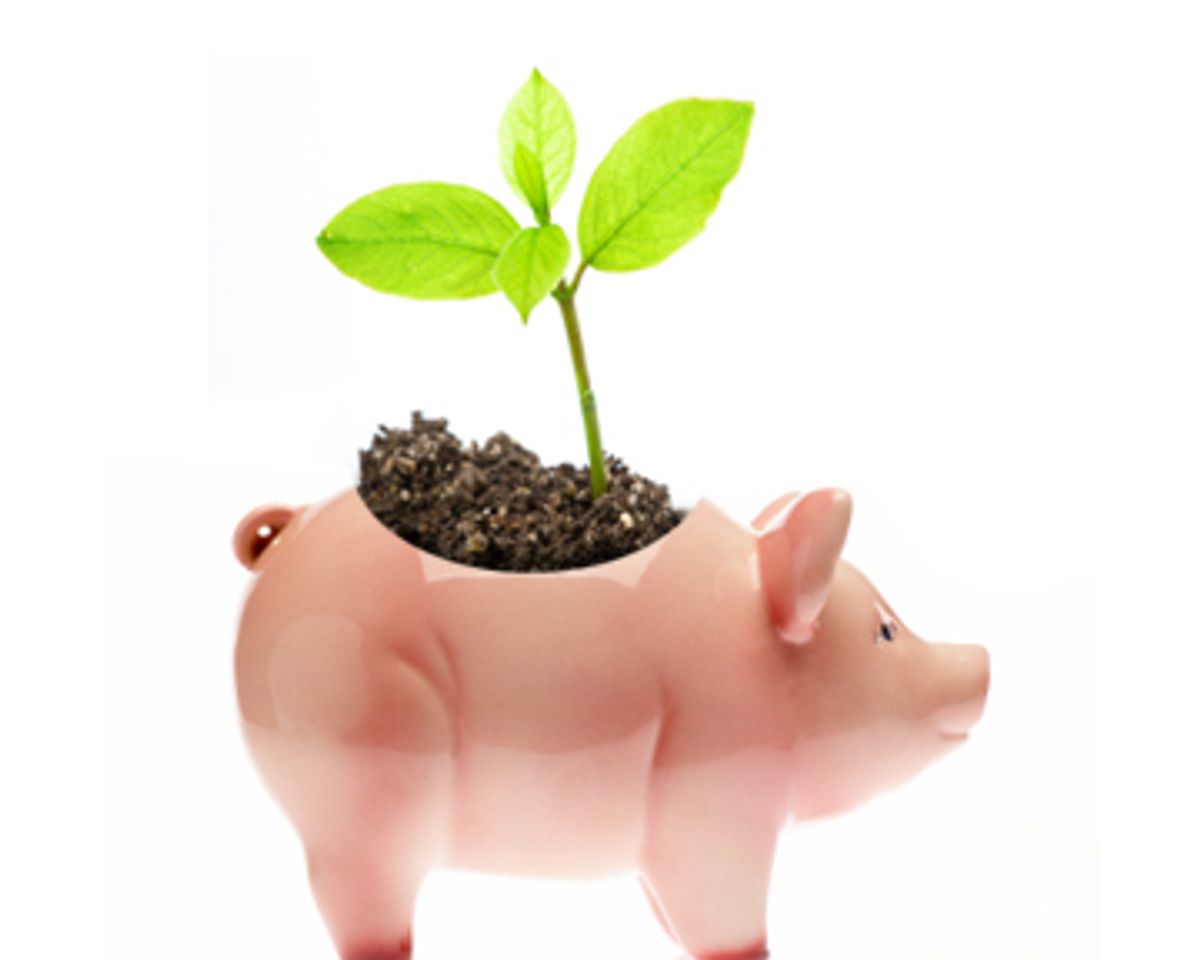 Until a few years ago, I hadn’t given much thought to my food budget, beyond the basic “Do I have enough for fries?” But getting married and having a kid and buying a home with money you don’t technically possess will do wonders for your budgeting habits. As will having the sort of wife who occasionally shops at Whole Foods.

Ergo our monthly food budget: now approaching $500. This figure is bound to go up, given that inflation is cresting. As recently as August, it was 6 percent in the (yummy sounding) “food sector.”

In fact, by all reliable indications – this excludes the entire mainstream media – food prices will continue to skyrocket, as the cheap-oil fiesta winds down. John McCain may be willing to drill through his own Ferragamo loafers for crude, but you can’t fool Mother Nature -- or supply and demand.

I was brooding about this a few months back, gazing broodingly upon the vegetal ruin of my backyard, all that wasted arable soil, when a revolutionary plan took shape: I needed to plant my very own recession garden.

The idea was inspired by the victory gardens that Allied civilians were asked to plant during World War II. My intention was a bit more humble than the defeat of fascism. I pretty much just wanted to stop getting looted by upscale supermarkets.

I will grant that there was some skepticism around the Almond household when I announced my plan. And I will grant that it was justified. After all, my agricultural experience is limited. I have never owned a houseplant, for instance. I have never worked on a farm, if you exclude an afternoon spent picking grapefruit on a kibbutz when I was 20, which I figured might get me laid.

On the other hand, my pedigree is fairly strong. My father is a former hippie who grew fruits and vegetables throughout our childhood. My brother Dave has followed in his footsteps, to the point of raising chickens. My problem was I never had land to call my own. That and the fact that I am extraordinarily lazy.

But the price of food had finally outstripped my sloth. Why pay four bucks for a pound of sun-ripened organic tomatoes when I could pop a few seeds in the ground and grow my own for, like, pennies?

In those heady, early days – before I’d actually done anything, that is – it seemed possible that I might turn my recession garden into a business venture. I’d visited a few of those über-folksy family farms – like the tony Wilson Farms in Lexington, Mass. – and paid for its exorbitant eggplants. Was there any reason I couldn’t charge people for my own exorbitant eggplants?

As it turned out, there was. Namely, I didn’t own a rototiller. I needed a rototiller because, as "Organic Gardening for Dummies" kindly informed me, I needed to “turn” my soil before planting.

Thankfully, my father-in-law owns a rototiller. Even more thankfully, he is one of those men for whom the operation of large machinery is not a burden but a spiritual exercise. It took him no more than an hour to tear up the raised plot that I envisioned as the heart of my operation.

Next up, my own father, whom I enlisted during his most recent visit. Together, we went to a local nursery and acquired seedlings in the following proportions:

Also purchased were packages of cucumber and cantaloupe seeds, an absolutely putrid bottle of shrimp fertilizer and 25 pounds of manure. (As it turns out, human bullshit, of which I am a prodigious manufacturer, is useless for gardens; you need the kind cows make.) My dad also supervised the planting, meaning he watched me dig holes and offered trenchant advice, such as, “You might want to use a trowel rather than your fingers.”

Ah yes, the weeds. They grow rapidly, indiscriminately, like … weeds. This was especially true of my garden, because my wife forbid the use of any nasty pesticides or herbicides, which she framed as the equivalent of pouring DDT down our toddler’s throat.

But here’s the thing (and please don’t tell my wife this): I kind of like weeding. For a guy whose job involves sitting in front of a screen all day long in my underwear, the chance to head outside and engage in physical labor is thrilling. My hands get grubby, and I leave them that way. My muscles ache, and I apply liniment to them. My wife complains about the stink, and I wash off the liniment. It’s all so pioneersy!

I also take great pleasure in complaining about the weather. And this isn’t the entitled whine of a yuppie whose tennis match is spoiled by humidity. No, my concern is that my basil might bolt. And that my Early Girl tomatoes need more dry heat. Many’s the afternoon I sit upon my ole back porch and stare at the clouds overhead, silently cursing them for their refusal to a-rain. Then I drag out the hose.

The best thing about all of this is that crops need very little to grow. Sun, water, devout Christian prayer – that about does it. And this is why, no more than six weeks after the initial planting, I enjoyed our first harvest: lettuce in three varieties.

Such lettuce! For six weeks solid, we ate huge salads every night. We foisted lettuce on friends and neighbors. We briefly considered insulating the attic with lettuce. I spent a good portion of my days (perhaps 40 percent) calculating how much money we were saving on lettuce. It was glorious.

Then the herbs began to bloom. Fresh herbs. Succulent! Fragrant! Essentially free! (No more plunking down three bucks for a plastic pod of basil!) The tomatoes came to fruit next, with the melons and cucumbers not far behind. Everything was exploding from the soil.

I couldn’t understand what I’d done to deserve such a bounty. Then one day I was talking to my neighbor, Harry, who pointed out the obvious: Our house was built on farmland. In fact, our entire town had been farmland once. This explained why all the flower beds and lawns and shrubs in our neighborhood grew with such Stepfordian vigor.

In other words, we’re lucky as hell. For us, launching a recession garden was mostly a matter of reallocating our yard space from ornamental to edible use. Folks in Tucson, Ariz., or North Dakota might have a tougher time of it.

But the fact is, we’re all facing the same crisis: the collapse of late-model capitalism as we know it. As James Howard Kunstler (and countless other social theorists) has pointed out, the end of cheap oil will mean an end to our vast, subsidized food emporiums. The suburbs we’ve created to indulge in our pastoral fantasia will no longer be garnished with apples from New Zealand and shallots from China. If we want fresh produce, we’re going to have to grow it ourselves.

In this sense, my wannabe farmer routine is no joke. It’s the beginning of a vital transformation, from passive consumer to DIY producer. Just as I grew up watching my dad sowing strawberries and snap peas, I want my kids to see me hoeing and planting and weeding. And I want them to help when they’re old enough. (At the moment, my daughter’s contribution to the garden consists of picking green tomatoes, which she calls “potatoes.”) I truly believe they’re going to need these skills in the decades to come, as our society turns away from the impossibilities of convenience and back toward a more humble, self-sustaining manner of living.

At the moment, our tiny garden is a novelty, a kind of indulgence. It barely takes any of our time or energy. But that’s going to change, as surely as the prices at our gas stations. My wife and I already are discussing tearing out more of our lawn and setting up a composting operation. It’s also clear to me that I’m going to have to figure out a way to keep my tomato plants growing vertically. Like it or not, we’re going to have to make our land more economically productive. Better to start that process now than to wait until it’s a matter of survival.