No time to cry wolf

It's right to be afraid of Sarah Palin and the outcome of the election. But still, we have to have faith. 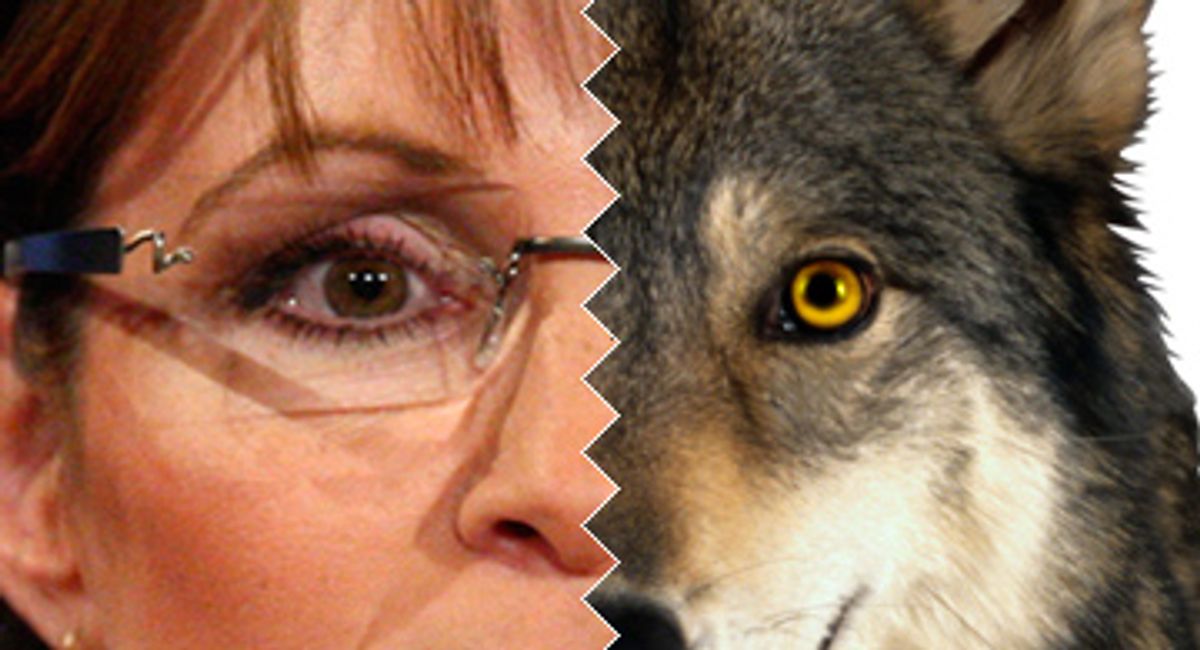 My pastor once said that you can trap bees on the bottom of a jar without a lid because they won't look up. They walk around frantically bumping into glass while, one presumes, muttering.

I've been feeling like that lately, in these last weeks before the election. I feel trapped on the bottom of the TV jar, frantic, buzzing, bummed. It was largely due to having to see and hear Sarah Palin every time I turned on the TV or radio. Has there ever been, at least in the last 10 years, a more thoroughly repellent American? I mean, besides Lou Dobbs? But Lou Dobbs is easy to avoid, and he's not a moron, he's a jerk. But Palin is as ridiculous as the competitors from Monty Python's Upperclass Twit of the Year competition, jumping over hurdles that are nothing more than a stack of matchbooks. Yet many suggested Palin's debate was a tie, that she had "succeeded," apparently, because she failed to lapse into witchcraft incantations or talk about her lady parts. Camille Paglia, writing in this publication, referred to her as nothing less than the new feminist idea.

During the worst of last month, when John McCain was rising in the polls and the market was crashing and George W. Bush was popping in and out of the White House doors like a guy in a cuckoo clock, people told me that there was nothing to fear but fear itself. Hah. What about a nervous breakdown? What about the weight gain that came one pound at a time, in step with McCain's rise in the polls? What about the specter of financial ruin? The anxiety has been purgatory -- not heaven, not hell, but perma-suck. And I haven't even gotten to my own private wolf attack yet.

But how can you dwell on your own (pitiful) encounter with a wolf when so much of the national dialogue has been about the variety of large, majestic mammals that Palin enjoys killing for sport? When I first heard about Palin, I felt as though Dick Cheney had prematurely come back from the dead -- another Strangelovean Christian shooter. (When Cheney accidentally shot his best friend in the face, they were on a ranch for fancy right-wing Christian shooters. Are there undisclosed locations where, if you know the right people, you can club baby seals, or harpoon whales?) However, Palin is not smart like Cheney. In fact, I don't even think she's as smart as Bush. And the thought of enduring another dense and incurious leader in the White House is terrifying. The world has roared with laughter at Bush, has routinely voted him the most dangerous man on the planet -- and, in some cases, has actually recoiled from him as though from hot flame. Remember the look on German Chancellor Angela Merkel's face when Bush snuck up behind her at the dinner table and massaged her shoulders? Can you imagine, for one moment, what she would make of a Palin presidency?

But Bush is so five minutes ago. And besides, some otherwise reasonable people choose to believe a kind interpretation of Bush Jr. -- that he was naive and well intentioned, convinced he heard the voice of God. He spoke to a higher father. Every so often, glimpsing the smug and gregarious ignorance of Bush, I'd be reminded of Helen Mirren playing Elizabeth II in the 2006 film "The Queen," when she says to the newly elected Tony Blair, "Mr. Blair, you are my 10th Prime Minister. Mr. Churchill was my first. He sat right there." In other words: Tick-tock, tick-tock.

Last week was better, and the trapped-bee feeling abated somewhat: Barack Obama's polls were rising, and the crowds at Palin rallies became so toxic that famous Republicans like Christopher Buckley had to backpedal or jump ship, lest they be associated with her. She still has a few staunch friends. Of course, even Richard Nixon had loyal friends at the end, or at least "friend": that nice Bebe Rebozo.

But we still have 21 of these nerve-rattling days to get through. Race is still an unknown factor; one of the savviest people I know says Obama will poll ahead by 10 points but only win by 3. On top of this, the Wall Street wolf has now arrived at the door, snarling and gnashing its teeth. (Hang on, I will tell you my wolf attack story in a moment.)

So with all of this going on so close to home, how can we hang on, take care of one another, make a difference, live lives of purpose and dignity and joy -- without losing our minds?

I will tell you: Remember the bees, and look up. Don't stare at the bottom of the jar in which you are trapped. Turn off the TV for half an hour, and look up. Don't look at the Wall Street traders in their distressing guise as bees, trapped on the floor of the exchange. They are not prisoners, like the bees; they are volunteers. Instead, look up at your computer and find a good charity site where you can send whatever you can afford. Go to  Oxfamusa.com or DoctorsWithoutBorders.com. Send what you can to Planned Parenthood in the name of Sarah Palin. Send what you can to Obama's campaign in a swing county in your nearest swing state. The Republicans are wrong: You don't always lose if you share. You actually get really, really happy.

I send $25 a month to a place where my family has adopted children since 1992, and I send money off to Planned Parenthood so that teenage girls and women will not be trapped into having babies they don't want and for whom they can't provide. Whatever you can send is the right amount. If you can't send money, send a promise to volunteer a certain number of hours. Can you put in 15 hours between now and the election? If not, use what you do have and do what you can. Picasso said, "If I don't have red, I use blue."

And then look up again -- look up at the ceiling that has trapped you inside and get yourself outdoors. Take a 15-minute walk and say hello to every single old person you see. Stop and talk to them if they want to. Wash the car, which you know you've meant to do for over three weeks now, or wash the dogs out back. (Trust me on this -- people have mentioned your smelly dogs to me more times than I can count.) If you don't have dogs, or a car, clean something big, like the windows. Get wet! This might spritz you back to the feel and sensations of your body, the miraculous now, the clean dogs or car, the living children you can help feed today.

You can always rush back inside and turn on the TV again. You've only given up a little money and a small amount of time, yet you might be feeling better already. When the prophet said, Cast your bread upon the water, I think he meant that it's the casting, the giving away, that floats back to us as a gift on the waves.

OK, OK: The wolf attack. A few days ago, trapped as I was on the bottom of the Palin bee jar, I looked up, saw that the sun was shining and took my two dogs to a local park. There is a big area in my rural neighborhood surrounded by redwood trees where dogs are allowed to run free. And run free they did.

Then a gorgeous young couple arrived -- upscale Burning Man types -- with a wolf. Granted, it was a scroungy wolf, like some refugee from the killing fields of Wasilla, Alaska, or a huge ratty old Beanie Baby. But it was golden and had long golden-black wolfen eyes and that distinctive, sexy slink.

They nodded. I wanted them to like me, because they were both so great looking, and so elegant and mellow. It was a girl wolf, named Ferrin. She looked like she had seen better days, like they had bought her at a consignment store. They took her off her leash. She immediately tore after my dogs and nipped my big mutt, Bodhi, in the hide, hard. It was terrifying. Bodhi yelped and raced over to me, and just as I started to suggest that maybe Ferrin would do well on a leash at a public park with children playing several feet away, Ferrin suddenly turned, like a heat-seeking missile, and bolted in my direction. I didn't have time to react. The wolf ran straight at me and hit me in the face, hard, so hard that I thought she had broken one of my front teeth.

Now, along with a nervous breakdown, weight gain and financial ruin, appearing in public with a broken front tooth is one of the things I am most afraid of.

I screamed in fear. Perhaps it is not news that I am just ever so slightly more tense than the average bear. But what only another religious type would understand is that, at the exact same time I felt so afraid, I automatically knew that God or goodness or good, orderly direction would see me through and that, all evidence to the contrary, things were going to be OK.

And they were: I was badly shaken up, but the tooth was not broken, just very sore. And the attack was maybe not so much an "attack" as a "bonk."

The Burning Man couple rushed over and helped me to my feet while apologizing, making sympathetic noises and rubbing my shoulders. They were lovely. They put Ferrin back on her leash. I piled my dogs into the car, drove home, wrapped myself in a blankie and ate my body weight in New York Super Fudge Chunk while watching cable news for the next two hours: heaven.

So what did I learn that day? I learned that fear is appropriate these days, much of the time. Don't let people tell you that you can't have faith and fear, as if you have to choose. The old saying goes, Faith is fear that has said its prayers. This is the best possible time in the history of the republic both to stay extremely afraid and also to keep the faith: If you feel too much of one, look around deep inside for the other. When you are really lost, take the next action that feels most right, and insight will follow. Justified fear is how we are going to win this election, and our faith in goodness, truth and the Constitution is why we must.

And, it almost goes without saying, wolves really don't belong in public parks, any more than they would in the office of the vice president of this nation.