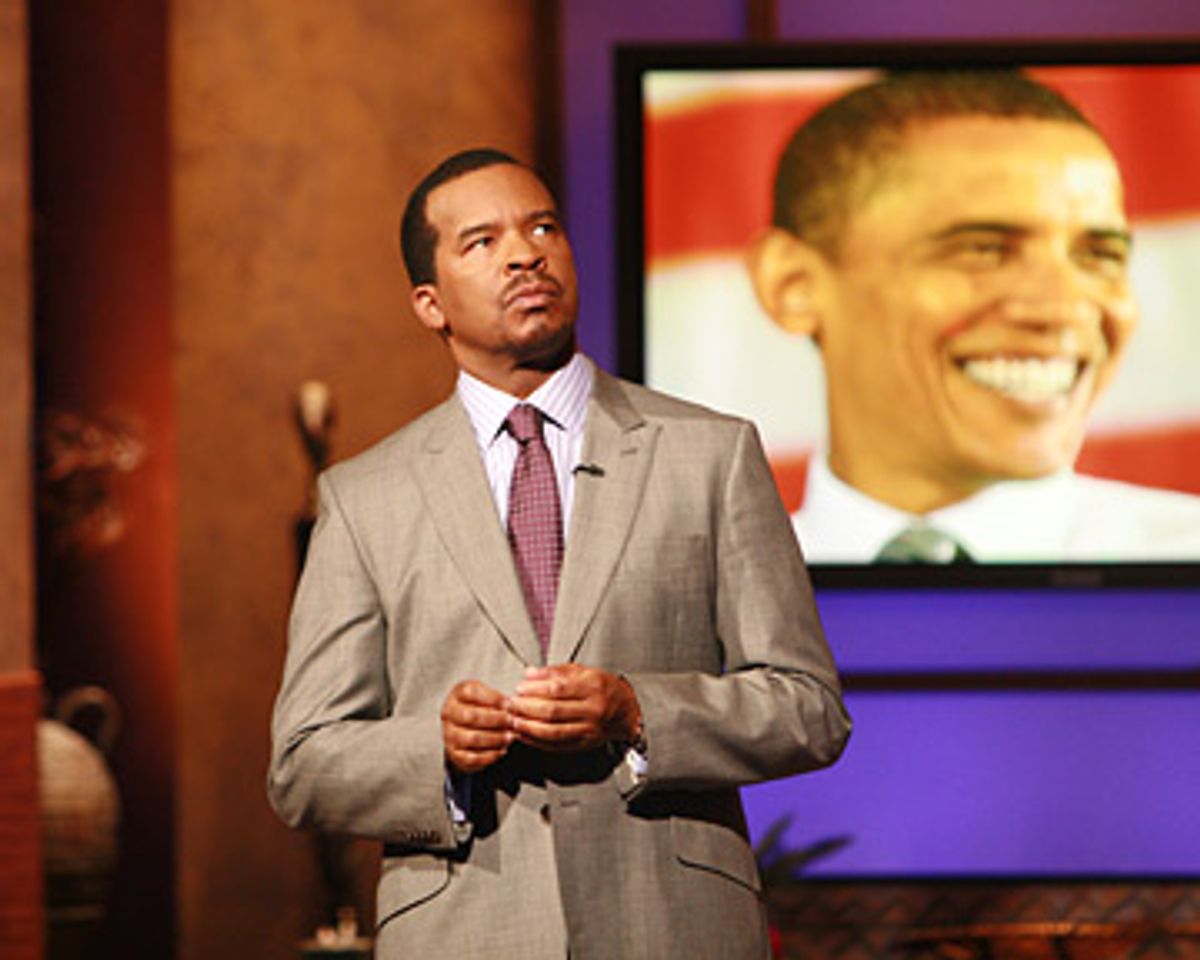 With all the bad news flowing through the zeitgeist right now -- the economy, the war(s), the mud-slinging campaigns -- great satire is more abundant than credit card offers. Tina Fey, Jon Stewart, Stephen Colbert and Bill Maher have all upped their games in inverse proportion to the fall of the stock market, and Chris Rock recently piled on with his uproarious HBO special "Kill the Messenger." With political spoofing moving at such a rapid pace, "In Living Color" vet and wacky character actor David Alan Grier's new Comedy Central series "Chocolate News," which premieres Wednesday night, will have to run like Usain Bolt to catch up with the pack.

Because Grier's newsmagazine parody, on which he plays anchorman alongside a rotating cast of correspondents and actors, may need time to hit its stride, it's hard to come up with a definitive answer to the most pertinent question: Is "Chocolate News" funny? The pilot delivers some hearty laughs, but it also has a couple of painfully tired bits that come close to deflating the entire proceedings. So, to paraphrase one of Grier's classic characters, the effeminate Antoine Meriweather of "Men on Film," I give it one snap up. Grier and his associates, including "Late Late Show With Craig Ferguson" head writer David Nickoll, are not attempting to create a black knockoff of "The Daily Show," or "The Colbert Report." While the magazine ads for the show, which wink at Obama and promise that "an African American man will bring his vision to a hopeful nation," suggest that the presidential race will receive more focus in future episodes, the pilot's humor mostly tackles race relations. Its format resembles that of a clumsily delivered community cable show in a large urban market like New York, Atlanta or Washington, D.C. -- complete with a set decorated with Afri-kitsch like kinte-patterned crockery.

Grier has created a bargain-basement TV anchor persona, to whom he has given his own real-life nickname, "Dag," a bourgie brother with a stiff spine and a pinstriped suit, who occasionally takes the piss out of righteous Afrocentrics. This is fertile and risky territory -- and the target group could certainly use a healthy dose of levity. But at first Grier tries to lampoon this easily offended group without alienating them -- a pointless exercise, and a real comedy-killer. He opens the show with an editorial, a rant about the death of hip-hop that, aside from a great joke about R. Kelly, has little to do with current events and sounds far too earnest. Dag is outraged that 50 Cent has started selling Vitamin Water and that Ice Cube "has gone from 'Kill at Will'" (his 1990 EP) "to 'Are We There Yet?'" (his 2005 family comedy). Dag is ridiculous, but his ridiculousness sounds rehashed.

We can only hope that the show will veer quickly and sharply toward the beacon of the pilot's two most hilarious fake news stories. The premise of the first is a tribute to the faux show's white correspondent, Roger Dunn (played by Arthur Roberts), who has died in the line of duty. A montage follows in which the poker-faced Dunn endures abuse from L.A. rioters and gangs. He also receives an uppercut from a drug dealer after foolishly asking, "How much do you sell your crack for?" The second item concerns a trashy rapper, Reginald "Phat Man" Harrison, played by a virtually unrecognizable Grier in a bald cap and fat suit, mistakenly enlisted by the government to create a public service ad for the recently renewed No Child Left Behind Act. Phat Man, who looks like Biggie and misbehaves like Sir Mix-A-Lot, creates a ludicrous PSA in which he spews champagne over the nearly naked glutes of women dressed as Catholic schoolgirls. His deliciously inappropriate lyrics conflate children with hos: "I'm talkin' 'bout the ... booty-poppin' child!" he growls.

Grier, as the newsmagazine anchor, doesn't get many laughs, perhaps because we aren't familiar enough with the real Dags of the world. For the most part, his models are local nobodies, not well-known black media personalities. When Stephen Colbert launched his "Report," he made it clear to anyone with a sense of irony that he was riffing on Bill O'Reilly and his ilk. But even if Grier were to base his caricature on a media figure like Tavis Smiley or Tom Joyner, how many of us would get it? And how much fun could you make of either of those guys, anyway? Political humor is best served as a poke in the eye of power; Smiley and Joyner's influence and name recognition aren't anywhere near as strong as O'Reilly's.

As if to compensate for Dag's dearth of mirth, Grier reprises his unforgettable turn as Maya Angelou, which his fans will recall from Grier's "Saturday Night Live" days. This time, Angelou recites her drafts of inaugural poems for Obama and McCain. But the sketch -- except for its Oprah-style soft-focus cinematography -- falls flat; again, Grier doesn't raise the skit's absurdity factor high enough. (If the cinematography is the funniest thing about your sketch, you need to rewrite.) Eleven years ago, Grier's "SNL" sketch of Maya Angelou doing commercials for Fruit Loops, Penzoil and Butterfinger was genius not just because of Grier's impersonation, but because of the tension between Angelou's overwrought poetry and the mundane silliness of the products. Here, Grier mocks only Angelou herself, performing a task that the real Angelou might. It feels like a sad attempt to recapture Grier's more glorious past on "In Living Color," from which his free pass is nearly expired after a decade of doofy parts in bad comedies and short-lived sitcoms like "Life With Bonnie."

After an uneven debut, "Chocolate News" may yet find its footing. But if Grier wants to be a contender before the election, he'll need to hit his stride soon and start hitting some of those overabundant timely targets without repeating his peers. Otherwise, the show will lose fans faster than Joe Lieberman.