Obama by a nose

An expert "face reader" tells us what McCain's jowls say about his drooping power base, how Palin's cheekbones explain her "polite" power style and why the Democrats are looking awfully good. 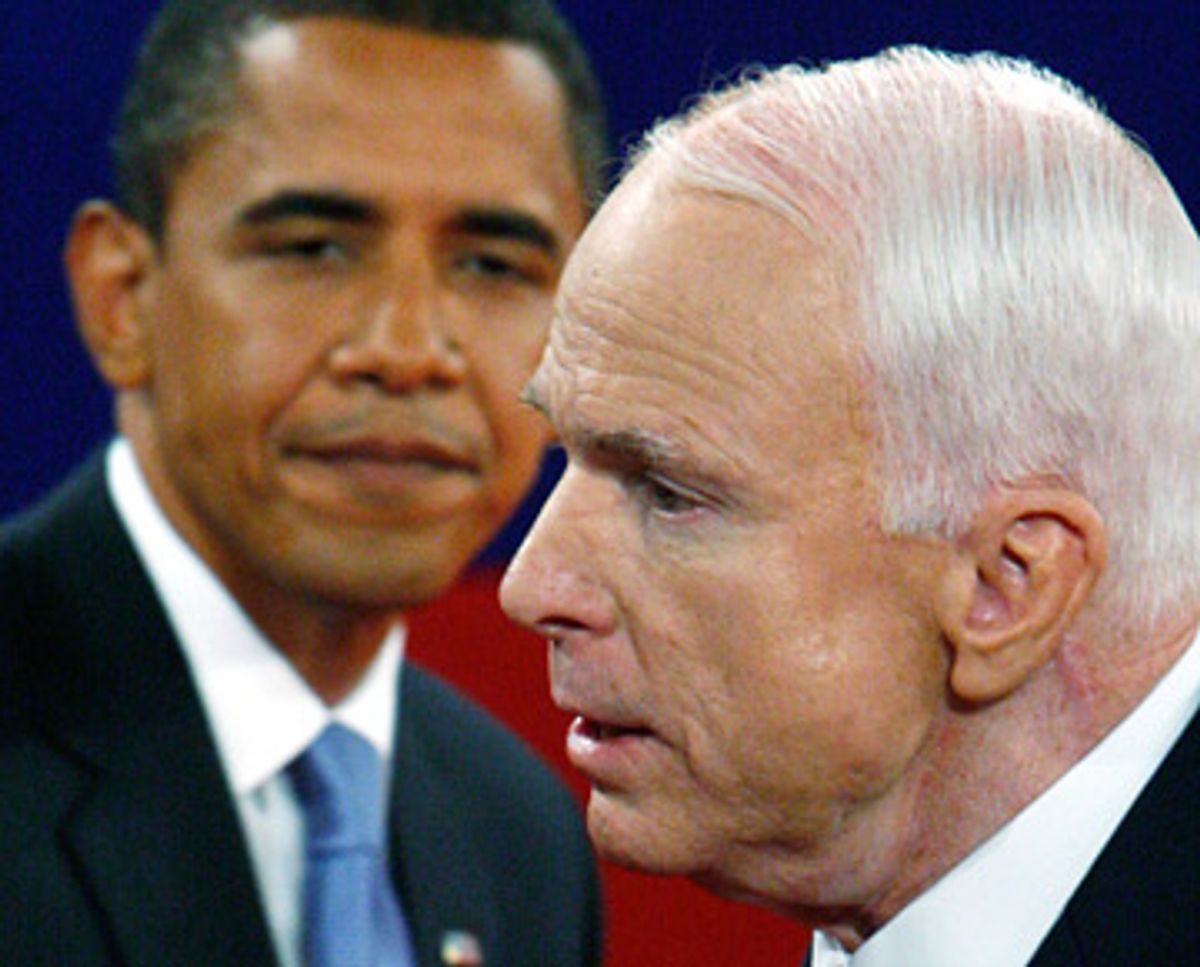 Rose Rosetree is looking up John McCain’s nostrils, and she’s seeing green -- green like dollar bills. McCain, she says, has a smallish nose and large, flared nostrils. The details of the Republican presidential nominee's schnoz tell Rosetree that McCain is “a relatively big spender” and “adventurous” with money. The rough texture of his nose tip and the slight angle toward the right suggest he’s not likely to change his spendthrift ways anytime soon.

The breaking story from up McCain’s nose might come as a surprise to voters who’ve learned about the candidate’s preferences from the news media. But Rosetree can find the information right there on his face. She says McCain’s mug is a rich enough topic for a Ph.D. thesis.

Rosetree is not, however, a scientist or clinician of any kind. Though she wouldn’t tell me her age or her birth name, she did say she went to Brandeis University in the late 1960s, putting her around 60 years old. She spent some years dabbling in transcendental meditation, which she now describes as a cult, before discovering her current discipline: face reader.

While you might feel an immediate urge to call what Rosetree does pseudoscience, in all fairness, she doesn't claim to be scientific. The art of face reading, she says, descended from the millennia-old tradition of physiognomy, which was practiced by no less than the likes of Aristotle and Pythagoras. Face reading rests on the basic premise, as she says, “that your face is meaningful and not some blob that got put on you like Play-Doh.” A different kind of meaning is legible to Rosetree in each different part of the face. To name a few: The nose represents a person’s relationship with money; the cheeks reveal a relationship with power and its use; the right side of the face is associated with the professional life, the left side with the personal life. As a personality changes, the face changes to match. (Wrinkles, says Rosetree, are “God’s makeup.”)

Because Rosetree claims expertise in this unusual methodology of sorts, I asked her to put her skills to work on behalf of an information-hungry voting public. Her analyses of the candidates’ faces, she stresses, are not prophecy. McCain still has the power to mend his free-spending ways, and if he does so, she promises his nose will show it.

As she guided me through a tour of McCain’s facial topography, Rosetree stopped to suggest explanations for some of McCain’s troubling behavior. “Another thing we can look at with him is his cheeks, which are fuller under the cheekbone. I know he’s famous for being a hawk, but I call that the pacifist power style, trying to keep the peace with others. The potential challenge with this is stored-up, explosive anger.” Rosetree might get a second on that from Texas Sen. John Cornyn, recipient of a choice “Fuck you!” from McCain during the failing negotiations over last year’s immigration compromise.

Heading south from McCain’s cheek, Rosetree settled on the senator's jowls as a key indicator of his relationship with the public. “Jowls are about having your power base fall away from you in life. Like the sweet, curmudgeonly paterfamilias who’s starting to have children and grandchildren make jokes about him while he’s in the room.” Now here’s a compelling theory: If the onset of jowls explains an avuncular figure’s loss of gravitas, well, no wonder McCain’s fallen out with his once-adoring journalist fan club.

Jowliness is one piece of “face data,” however, that McCain’s running mate, Sarah Palin, need not worry about. Though Palin shares McCain’s flared nostrils and rightward nose tilt -- which, Rosetree insists, has purely fiscal (not ideological) implications -- the Alaskan’s most defining feature is her square face. “There’s no particular part of her face that’s wider than the cheekbones. And that goes with a power style that I call the polite power style.” Polite? Palin, Rosetree says, has a “way of working the system. She figures out which strings to pull in order to get what she wants.” This seems like a fair enough description of Troopergate.

As it happens, the features of the Democratic running mates are not only well-matched with each other but also bode well for a Barack Obama administration. Rosetree swears that her brand of face reading is nonpartisan and nonjudgmental. (“God don’t make no junk,” she says.) Nonetheless, what Rosetree picked to talk about on the faces of the Democrats should thrill any liberal. “The forehead is the widest part of Barack’s face. What that relates to is the passion power style. This involves having ideas, goals, ideals even be more real to you than the obstacles that might get in your way. It means not being discouraged as other people are, but the potential challenge is being impatient with other people.” So far, it sounds like Obama’s skull was somehow molded by prescient political strategists. But it gets better:

“He and Joe Biden are nostril twins," she says. "Both of them have that straight shape to their nostrils. What that signifies, with the nostril size being small, is when it comes to spending, there’s a tendency to be able to stick to a budget. He also has a chunky nose tip. For 5,000 years, people have said noses are about nose style and how people deal with money. Look at Bill Clinton, probably the biggest nose tip we ever had as president, and he left with the biggest amount of savings. Look at George Bush with his petite nose tip, or Reagan with his nose tip, and they left with deficits.”

You heard it here first. How will we pay for healthcare reform while bailing out Wall Street? The Obama-Biden ticket has the nostrils we need. I have to confess to being totally unable to detect the Democrats’ nostril twinnage from pictures available online. If the two do indeed share this kinship, Rosetree is more discerning than I am.

But Biden has more than just a pretty proboscis. “What else is extreme about his face is low brows. This goes with a communication style where, when you have a good idea, you just blurt it out. But the great thing about that spontaneity is it goes with being able to think on your feet and feel right in the moment. The potential challenge with this, especially if you’re a politician, is saying things without consulting the pollsters.” Considering Biden’s admirable restraint in his debate with Sarah Palin, maybe we’ll see those eyebrows climbing higher on his face. As for Biden's much-noted hair plugs, Rosetree wouldn’t comment, saying her expertise stops at the hairline. And while she says that Biden’s straight chin bottom suggests a worrying tendency toward black-and-white thinking, Rosetree “suspect[s] he’s overcome this challenge, because of his power-line dimples." Didn’t Obama’s VP vetting team say something similar back in August?

Of course, Rosetree’s had a lot of time to examine the faces and the personalities of the big four. We all have. (I, for one, am surprised there hasn’t been more debate on the vital issue of what appears to be a mole above Obama’s left nostril.) Rosetree's evaluations line up rather nicely -- even conveniently -- with what many pundits have been saying about these characters. To test Rosetree a bit further, I asked her to interpret the faces of a handful of other prominent figures, e-mailing her photos to use in her evaluation.

Hillary Clinton’s cheeks, says Rosetree, are working against her mouth. Her wide cheeks mean that she attracts heavy criticism and lives for the spotlight, but “tremendous sorrow” is visible in the downward angle of her mouth’s right side.

Alec Baldwin’s arched eyebrows suggest a “managerial mind-set.” “This is not somebody that just sits by and says ‘whatever.’” I pointed out that Rosetree’s reading of Baldwin sounds rather like his "30 Rock" character, corporate chieftain Jack Donaghy. “Casting directors either do face reading or aura reading, or I think they have very strong intuitive abilities,” she says.

Fox figurehead Bill O’Reilly -- whom Rosetree did not recognize until I named the photo -- has “an extremely large, macho knob. Capital M, capital K. That is a doorknob-like structure on the bottom of his chin. It’s something that can grow or contract over time. The talent is aggressively going for whatever you want, no matter what. And the challenge is being a bully.” Rosetree says that O’Reilly is a chin twin with, of all people, Saddam Hussein. The dictator’s chin knob grew and contracted as his power waxed and waned, she says, all but disappearing by the time of his capture. “At the height of his power, it was 25 percent of the length of his face.”

Rosetree also failed to recognize a picture of arch-conservative pundit Ann Coulter, but I asked her to come up with a reading before I would identify the thin, crucifix-wearing blond woman in the picture. Apparently, the groove running down from Coulter’s right nostril suggests a lack of sympathy for “people getting what she would view to be handouts.” So far, so good, Rose Rosetree. “She’s got two-thirds of her mouth pulled to the right, and a third to the left. The way I would interpret that is that making an impression with her public speech is very much more important to her than whether she believes it.”

If all of this makes you crack a smile or roll your eyes, well, you're not alone. Rosetree's work feels like a harmless, New Age take on just about the most tiresome and frustrating habit American voters have: judging the candidates on their superficial qualities. With this campaign appearing to boil down, for many, to the old white guy against the young black guy, it is important to remember that the leader of the free world needs to do more than look like he could fit in standing around with a beer at your barbecue. Once in a while, though, we do learn something from watching the candidates; television, in its early days, helped voters notice just how weaselly Richard Nixon really was in his 1960 debate with John Kennedy.

We can (and should) deplore voting on style over substance, but let's not pretend we don't read people every day, based on how they look. There was a reason, after all, that Al Gore paid Naomi Wolf handsomely to advise him to wear earth tones. Some of us may just be more skilled at reading faces than others. And a few of us even make a career of it.