How to fix the Department of Homeland Security

Among other messes left behind by Bush, the next president will have to clean up this unwieldy, inefficient behemoth. A few suggestions for Obama and McCain. 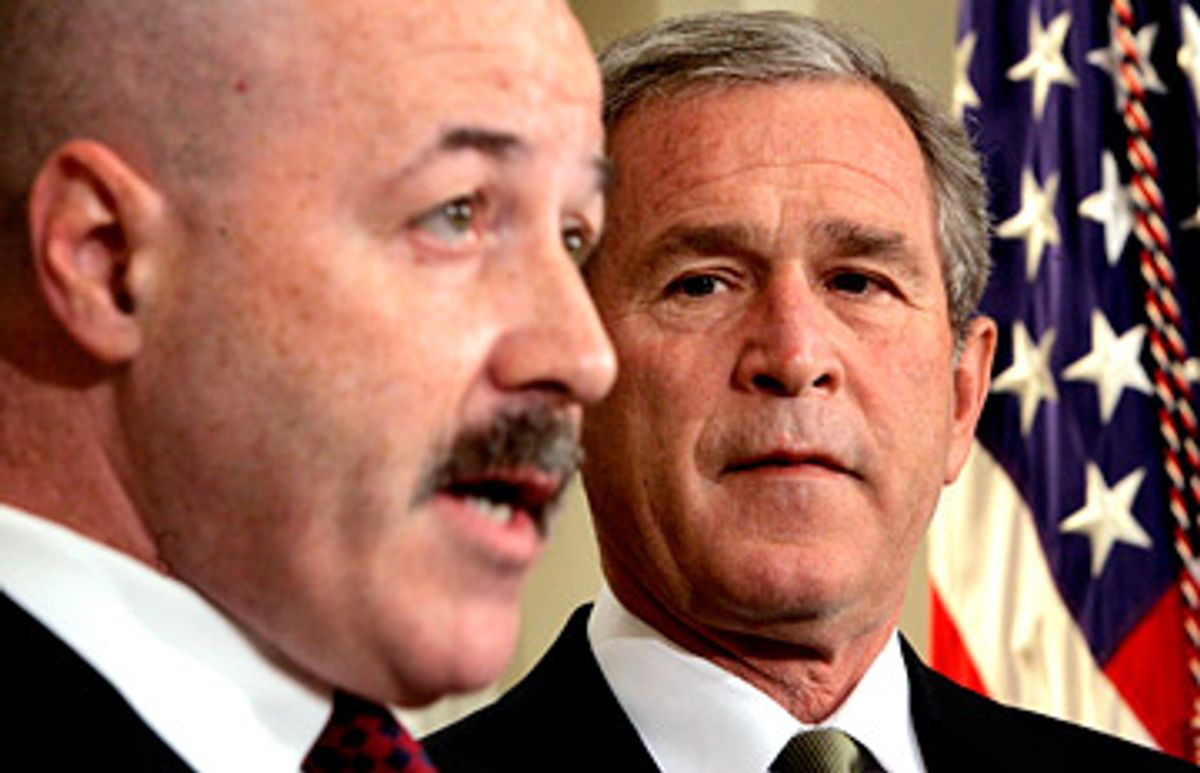 While the nation's attention is on the largest financial bailout in U.S. history, there is another bequest of the Bush administration to the next president that is a hallmark of government expansion and big spending: The U.S. Department of Homeland Security.

DHS was created in the aftermath of Sept. 11 to protect America from terrorism and in the process created a ball of bureaucracy that cannot be easily untangled. The establishment of DHS, the most important civilian agency for ensuring the nation's security, represented the largest reorganization of the federal government since Franklin Roosevelt's New Deal. Within DHS are the Federal Emergency Management Agency, the Transportation Security Administration, the Coast Guard, Customs and Border Protection, the Secret Service and 12 other components in charge of critical government functions including immigration and nuclear detection. The secretary of the Department of Homeland Security oversees all of this and is the public face for raising and lowering the National Threat Advisory (currently, yellow), making this appointment one of the most important facing the president. Eighty-six congressional committees have oversight of DHS.

When the presidential candidates talk about big government, it doesn't get any bigger than the Department of Homeland Security. So why then are John McCain and Barack Obama silent on DHS? At both the Democratic and Republican conventions, despite their collective promises to make homeland security a priority, not once did Sens. McCain, Obama and Joe Biden or Gov. Sarah Palin actually utter the words "the Department of Homeland Security." One would be hard-pressed to find even a mention of DHS in any of the candidates' stump speeches. DHS was mentioned only once in the first presidential debate on national security and not at all in the second debate.

The absence of talking points on DHS may be in part because neither presidential candidate knows what to do with or how to manage this behemoth. Arguably, DHS will be the Bush administration's longest legacy, lasting long after the bailout is paid back and the troops leave Iraq, perplexing presidents for generations to come around how to manage its hodgepodge of agencies and wide-ranging missions. Dismantling DHS is not an option: The department's size and functions are so large and complex that to undo them is probably both politically and practically impossible.

Since its creation, DHS has proved a constant thorn in President Bush's side. Hurricane Katrina showed how difficult the coordination of multiple agencies subsumed under DHS can be, and that DHS did not have strong relationships with its state and local partners -- which number over 80,000. Katrina also revealed that many of those put in top positions at DHS, most notably Michael Brown at the helm of FEMA, were not qualified, and that many positions were vacant despite their critical importance. DHS also has problems holding the public's trust. Movements of the National Threat Advisory are met with skepticism by a populace that remains unprepared for disasters. TSA's ever-evolving policies at airports have contributed to a domestic airline industry that is roundly unpopular.

Yet the next president can take solace in knowing that the prospects for making the Department of Homeland Security a more efficient agency do exist. He can begin by emphasizing true merit rather than patronage in his appointments. More than once during the Bush administration, cronyism caused embarrassment for DHS. The next DHS secretary should have a certain level of experience with actual homeland security issues and managing complex organizations with large budgets. Bernard Kerik aside, a figure in metropolitan law enforcement really might make an ideal appointee. Furthermore, nominees for the key components of DHS -- like FEMA and TSA -- should have actual experience in relevant areas, such as disaster response in the case of FEMA's director and transportation systems for the TSA administrator. These highly specialized positions require career professionals and should not be given to political appointees. And no nominee with lobbyist ties or substantial private-sector interests should be accepted.

Apart from staffing within DHS, congressional oversight of the agency needs to be streamlined. The 86 congressional committees with oversight of DHS must be dramatically reduced to ensure that a consistent, easy-to-locate voice can be found in Congress that is accountable for the performance and budgeting of DHS. One of the reasons DHS is so large is that Congress has allowed the agency's budgets to be layered with pork and poor judgment. Take for example the Urban Area Security Initiative, a DHS program that provides funding to states to improve local security and response efforts. Rather than provide UASI monies to the places most at risk, Congress has allowed UASI money to be spread nationally, giving a little bit to everyone and everywhere, including places with questionable exposure to terrorist events, like rural areas and small towns. It was UASI that, famously, allotted more money per capita to remote towns in states like Wyoming than to New York City and Washington, D.C.

Given that the complete dissolution of DHS is likely not an option, realignment of some of its parts may help ensure that budgets are not wasteful, oversight is adequate and the best people are appointed to the most important posts. For example, prior to the Bush administration, FEMA was a Cabinet-level agency. Removing FEMA from DHS and restoring it to the Cabinet may make sense to better guarantee that the president is closely tied to federal disaster events. Precedent for revising the structure of DHS does exit. In July 2004, the Strategic National Stockpile was returned to the Department of Health and Human Services once it was recognized that medical incident response is best managed by those with specific expertise in the area and who are most closely integrated in the public health system.

While DHS, post-Katrina, has shown substantial improvements in its ability to prepare for and respond to disasters, as evidenced by the evacuations around Hurricane Gustav and improved methodologies for administering UASI funds, for these gains to be sustained and improved upon the next president will need a strong plan for the management of DHS. To that end, the candidates must tell the American public if they believe DHS is efficiently structured both functionally and with respect to costs and, if not, what they will do differently. What kinds of qualities will they look for in a DHS secretary? And ultimately, what is the future of DHS under their tenure? With the answers to these questions the American people will know better who the next president should be. Continued silence on DHS is unforgivable. For if the next president does not start talking about how the nation's largest agency will fit into his administration, then Americans can have little to hope for other than that DHS will be remembered as a towering monument to bureaucratic hubris.

David A. Berman is the associate director at New York University's Center for Catastrophe Preparedness and Response, where he is leading an effort to look at the Department of Homeland Security and the next presidency.

Paul C. Light is the author of “A Government Ill Executed: The Decline of the Federal Service and How to Reverse It.” He is the Paulette Goddard Professor of Public Service at New York University's Robert F. Wagner Graduate School of Public Service, and an investigator with both the Center for Catastrophe Preparedness and Response and the John Brademas Center for the Study of Congress, both at NYU.