"The Secret Life of Bees"

This clear-eyed movie doesn't shy away from the racial tension and violence that marked the South in the 1960s -- yet it buzzes with optimism. 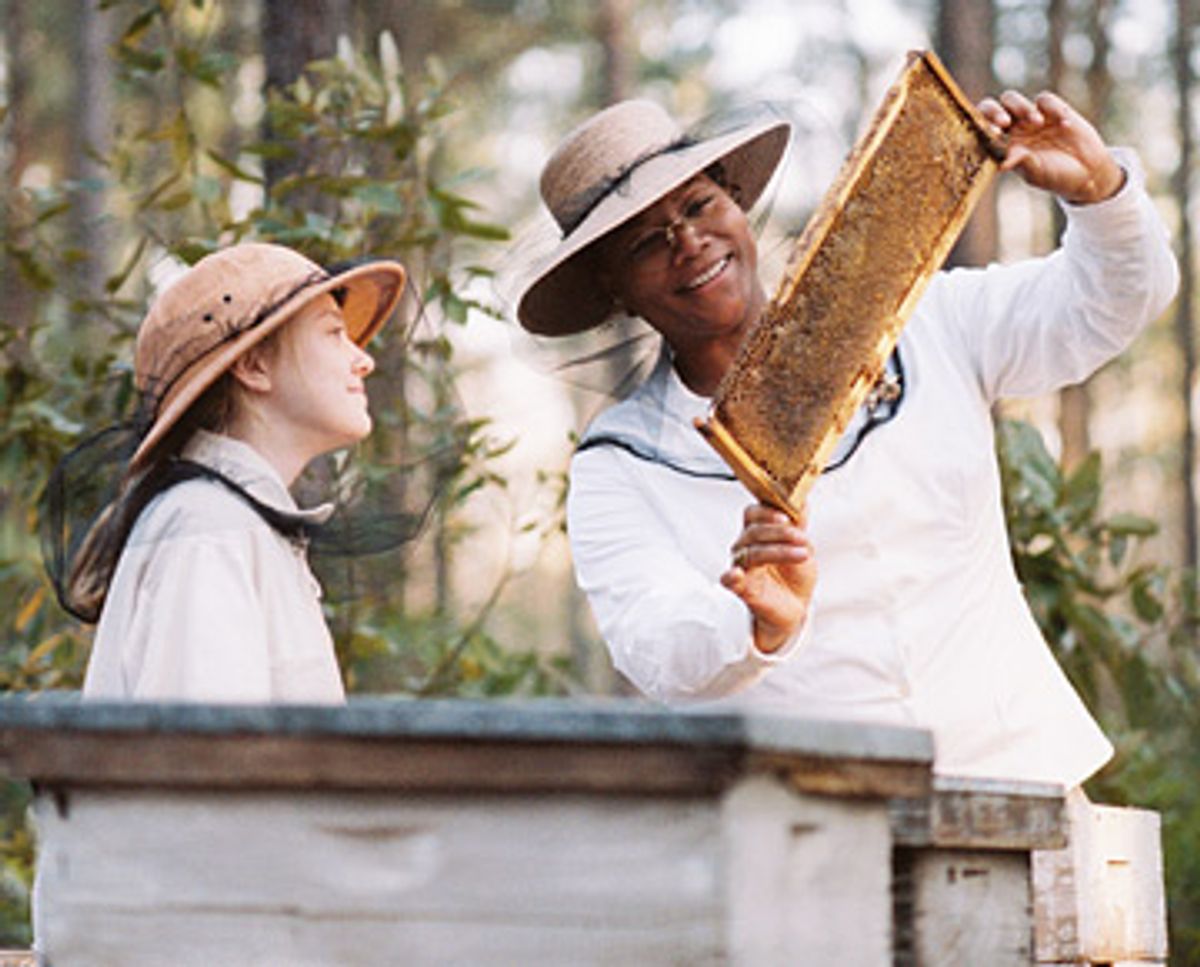 There are all sorts of problems with "The Secret Life of Bees," beginning with the failure of the director, Gina Prince-Blythewood (who also wrote the script, adapting it from Sue Monk Kidd's novel), to steer the story out of the sentimental mire it sometimes veers into. But imperfect movies sometimes have more life to them than the most painstakingly executed pictures do, and "The Secret Life of Bees" is a case in point. Dakota Fanning plays Lily, a young teenager growing up, unhappily, in rural South Carolina in the mid-1960s. Lily's mother died when she was 4; the greater horror is that it was Lily herself who accidentally shot her. Her father, T. Ray (Paul Bettany, who seems miscast only until his final scene), an ill-tempered redneck, has no use for Lily; she barely seems to exist for him, except for the fact that he needs her to help out on the family's small peach farm.

Lily is much closer to the family's housekeeper, Rosaleen (Jennifer Hudson), who, although she isn't much older than Lily, clearly fills the role of surrogate mother. Lily and Rosaleen set out on a journey that's sparked by a historic act: Together, they watch LBJ on television as he signs the Civil Rights Act of 1964. On Lily's birthday, a few days later, Rosaleen tells T. Ray she's going to take the girl into town to buy her a training bra, but Rosaleen wants to do another errand as well: She intends to register to vote.

"The Secret Life of Bees" is rated PG-13, and it's clearly designed to be appropriate fare for young adults. Yet it doesn't shy away from the racial tension and violence that marked the South in the 1960s: That violence is handled deftly, but it's not downplayed. Ultimately, though, this is an optimistic picture: Rosaleen and Lily's original plan is derailed by brutality, but they eventually find their way to a place where they feel literally and emotionally safe. They meet August Boatwright (Queen Latifah), a self-made woman who, with the help of her sisters May (Sophie Okonedo) and June (Alicia Keys), runs her own successful honey-making business. August takes Lily and Rosaleen into her home, training Lily as an apprentice beekeeper and enlisting Rosaleen to help out in the kitchen. The world August and her sisters have built for themselves, in their comfortably furnished house, where everyone pitches in and supports one another, is new to both Rosaleen and Lily: They've entered a world where it suddenly seems possible to shape their own future.

The culture around us is filled with stories of self-determination aimed at young women: The phrase "Girl power" is thrown around so often it's become nearly meaningless. But not many of these stories are set in the 1960s South and feature a range of black characters (as well as just one lone white character -- Lily is the minority here). In fact, I can't think of any recent movie that's anything like "The Secret Life of Bees." The movie even addresses, subtly, the idea that a romance may be budding between Lily and August's godchild, a smart, sweet, hardworking kid named Zachary (Tristan Wilds), who helps out with the honey business. But the movie doesn't take the romantic view -- that love can conquer all -- because in the South in the mid-'60s, it definitely couldn't. "The Secret Life of Bees" is realistic and clear-eyed in its assessment of the way things used to be -- even as it acknowledges that that isn't the way things should have been.

"The Secret Life of Bees" might have been alternately titled "The Not-So-Secret Power of Women": Sometimes the movie hammers on the stereotype of the strong black woman a little more heavily than it needs to. But Prince-Blythewood (whose credits include the 2000 "Love & Basketball") knows that her performers are her real secret weapons, and together they keep the picture from becoming unbearably messagey. Keys is terrific as the sister most likely to become an activist -- and you know that not just because she's wearing an NAACP Youth Council T-shirt, but because you can see the determination, mixed with a little understandable bitterness, in her eyes. Okonedo has the tougher job of playing the "simple" sister; May feels the troubles of the world so deeply that she's almost unable to bear them -- but Okonedo is skilled enough to keep the performance from becoming too much of a caricature. Hudson gives us a Rosaleen who's likable and stubborn, the kind of woman who can get pretty much anything done if she sets her mind to it. And Fanning, now that she's outgrown some of her moppet cuteness, is becoming a genuinely interesting actress: She plays Lily as a kid with good instincts who's nonetheless bedeviled by the uncertainty that all adolescents feel.

And Latifah is, as always, pure pleasure to watch. Latifah always gets cast as the strong, sensible type, but why not? It's impossible to imagine her as a weakling. Her portrayal of August Boatwright -- an entrepreneur, a fount of good common sense, a warm, welcoming presence in a cold world -- is the kind of performance that keeps us going to the movies in the first place. And her voice, mellow and sunny at once, is as melodic when she's speaking as it is when she's singing. "The Secret Life of Bees" may be overly sentimental at times, but at least it's about something. There are plenty of times when I watch a picture, one that may be perfectly well-conceived and executed with a reasonable degree of intelligence, and end up asking myself, Why does this movie even exist? As I watched "The Secret Life of Bees," that question never entered my mind.